In addition to the Tox and Hound post referenced and excerpted below, please read in its entirety, Wernicke Encephalopathy. Updated: Nov 20, 2018,  by author: Philip N Salen MD from emedicine.medscape.com.

Here are two very brief excerpts from the above article [Note to myself: when reviewing this post be sure and reread the entire article as it is a quick and complete review of the subject]:

No specific laboratory test is available for diagnosing WE. WE is a clinical diagnosis, and normal electrolyte levels may give only false reassurance and delay therapy. This is particularly the case when malnutrition is likely to be present. The motto should be “If in doubt, treat,” as administration of thiamine does not pose potential harm.

Moreover, neither a normal computed tomography (CT) scan nor a normal magnetic resonance imaging (MRI) scan of the brain rule out the presence of acute WE or chronic WKS.*

[The above article has been cited by 40 PubMed Central articles.]

Although WE remains a clinical diagnosis with no characteristic abnormalities in diagnostic studies, the use of laboratory and radiographic tests remains important to exclude alternate or coexisting medical conditions. The patient’s history and initial evaluation guide the selection of these tests.

And here are excerpts from the above outstanding resource:

You take the perilous sign out of a 55-year-old patient with alcohol use disorder (AUD) who came to the ED intoxicated. “He’s just metabolizing” your colleague tells you. A few hours go by and he is now awake and asking to leave. The nurse road tests him and he can walk, but is a little “shaky.” When you examine him, his gait appears ataxic. Is this normal?

A 30-something guy had a recent stay for EtOH withdrawal, and was discharged home. During your shift, hisis wife brings him back to the ED and says he just “isn’t right.” He doesn’t remember things the way he should and often seems confused. Is this just his new baseline?

A 40-year-old man was sent to the ED from jail with a concern for alcohol withdrawal. He has normal vital signs, no tremor, but he appears confused and has a dysconjugate gaze on exam. Are we missing something?

All three of these patients should make you think of one of my favorite diagnoses – Wernicke’s encephalopathy.

Wernicke’s encephalopathy (WE), also called “dry” beriberi, is a neurologic disorder caused by thiamine (vitamin B1) deficiency, first diagnosed by Carl Wernicke in 3 paitents in 1881.​1​ Thiamine, found in organ meats, eggs, and green leafy vegetables, is vital to the utilization of cellular energy. In its active form, thiamine diphosphate acts as a coenzyme in the pyruvate dehydrogenase complex. This enzymatic reaction converts pyruvate into acetyl-coA, linking glycolysis to the citric acid cycle (AKA the Kreb’s Cycle). 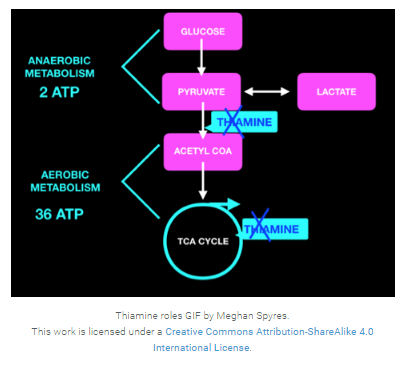 Thiamine is also a required cofactor for several steps within the citric acid cycle and is instrumental in the pentose phosphate pathway (I’ll mercifully spare you those details). Check this reference for more.​2​ In addition to those essential roles, thiamine also acts as a neuromodulator, influencing the release of acetylcholine.

Moral of the story: Eat your greens (or organ meats). But don’t cook them too long; thiamine is very water soluble and will leach out after prolonged soaking or cooking in water.

How does this enzymatic inhibition lead to the neurologic injury of WE? The direct mechanism is unclear, but animal models suggest increased glutamate concentrations (possibly resulting from that citric acid cycle defect I promised not to describe) may be involved.​3​

Wernicke’s encephalopathy consists of 3 classic clinical features: ophthalmoplegia, ataxia, and altered mental status/confusion.​1​ Alas, patients don’t always follow the textbook, so the clinical picture is often incomplete.​8​ Other features can include hypothermia, decreased deep tendon reflexes, and eventually a peripheral neuropathy. Tachycardia is often an early sign of thiamine deficiency. Labs may show a lactate associated anion gap metabolic acidosis (AGMA). This is secondary to the preferential conversion of pyruvate to lactate, not acetyl-CoA, in the absence of thiamine. Which raises an important point: thiamine deficiency should be on the ddx for AGMA or unexplained elevated lactates. My first line treatment for undifferentiated AGMA often includes thiamine, glucose, and fluids, but that is a different post for a different day. For untreated patients, WE can progress into Korsakoff’s psychosis, an irreversible syndrome characterized by confabulation (see below) and short-term memory impairments/anterograde amnesia. WE and Wernicke-Korsakoff syndromes have been associated with a 10-20% mortality or higher, owing to bacterial infections and cancer, amongst other causes.​9​

It is estimated that WE is present in up to 2% of the US population, but remains largely undiagnosed. It’s a challenging diagnosis to make.

There’s a tool (Caine criteria)* that can help identify patients with WE consisting of 4 components:

When 2 or more elements are present, the tool is very sensitive and surprisingly specific.*

[The above article has been cited by 53 PubMed Central articles.]

Of course, not all alcoholics have Wernicke’s, but the first step (the most often missed step), is simply considering the diagnosis and identifying patients at risk. This includes those with AUD due to poor consumption and absorption of thiamine. Interestingly, chronic ethanol use may also modify genes involved in thiamine absorption, increasing their vulnerability to WE. Others at risk include patients with:

The institutionalized elderly and prisoners may also be at risk due to poor dietary intake. And patients with CHF on high dose loop diuretics are also at risk due to increased elimination of thiamine.​11–14​

The key to distinguishing intoxication from WE is that in the former, these abnormal findings resolve when the acute intoxication resolves. If an intoxicated patient sobers up and is asking to leave, take a moment to do a good exam, checking for signs of WE. If the patient still has memory issues, an ataxic gait, or abnormal eye movements, this should raise some major red flags for you. Don’t expect to see the full triad. And don’t blow off confusion or ataxia, ascribing it to intoxication, if you think the patient is clinically sober.

Imaging, should you obtain it, classically shows hemorrhage into the mammillary bodies or third and fourth ventricles. Such advanced findings are in no way necessary to make the diagnosis, and absence of these findings should not change your decision making process.

The treatment for suspected WE is thiamine. But please note, it is not the dose you are used to giving to your AUD patients. Different sources recommend somewhat different doses of thiamine for WE, however the most widely accepted dose is 500 mg IV TID x 2-3 days, followed by 250 mg IV daily x 3-5 days.​15​ The goal is to restore CNS levels of thiamine as rapidly as possible. To do this, we have to take advantage of the passive uptake of thiamine into the CNS (the active transport mechanism is rate-limited, and saturable) by establishing a high plasma to CNS thiamine ratio. Frequent dosing is required as thiamine levels fall precipitously after parenteral administration. Want to delve more deeply into this? CCH Cook’s 1997 paper is an excellent read.​4​

To say it again: giving a patient a single standard dose of thiamine does not treat WE.

Magnesium is a cofactor for key thiamine dependent enzymes, and supplementation has been shown to improve transketolase (see below) activity when given with thiamine. Administering 2 g MgSO4 IV to patients with normal kidney function is recommended by Goldfrank’s, and your local toxicologists.​3​

And don’t forget the other side of thiamine deficiency: “wet” beriberi. Clinically, this is high output heart failure. Interestingly, most patients will only manifest one of the two beriberi syndromes. Dietary variations may be responsible for which version of beriberi manifests, which may be why Asians tend to develop the cardiac version and Europeans develop WE.

This is the number 1, 2, and 3 take home point. It happens more than you expect. As EM physicians, this is your diagnosis to make. Don’t expect the full triad. Use the diagnostic tool to raise suspicion. Treat WE with HIGH DOSE PARENTERAL THIAMINE. This means the patient requires admission. And as always, please consult your local toxicologist when suspecting WE.