First and Always–Think of and Rule Out Pregnancy

There are physiologic causes of anovulation (adolescence, perimenopause, lactation, and pregnancy). 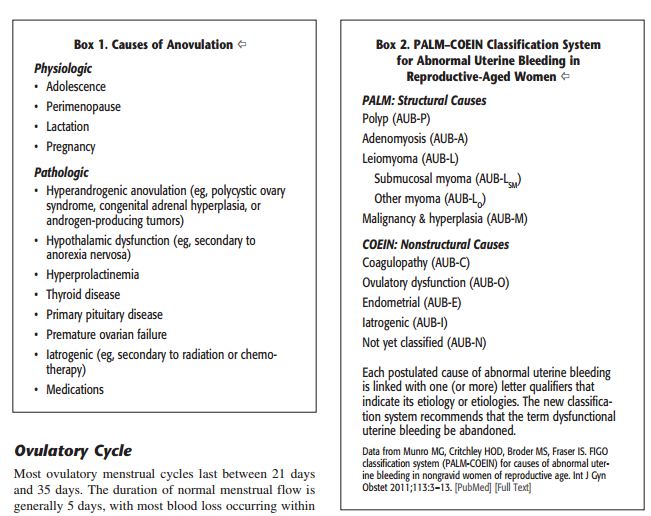 Tables 1 and 2 are from reference 1

“Most ovulatory menstrual cycles last between 21 days and 35 days. The duration of normal menstrual flow is generally five days, with most blood loss occurring within the first three days. The median age of menarche is 12.43 years with a typical cycle range of 21 to 45 days, with seven or fewer days of blood flow in younger females. Ovulatory cycles are predictable, but in most women, the length of the cycle can vary by a few days each month. Overall the length of the menstrual cycle remains relatively constant throughout the reproductive years, but cycle length varies as a woman approaches menopause.”

“Puberty and the perimenopause typically are associated with AUB-O (abnormal uterine bleeding due to ovulatory dysfunction) and are considered to be physiologic in these circumstances. In puberty the immature hypothalamic – pituitary – ovarian axis does not develop the necessary hormonal feedback to result in ovulation and a subsequently stable endometrium. As the perimenopausal transition occurs, progressive oocyte depletion and abnormal follicular development lead to anovulatory cycles.”

In order to establish that the abnormal uterine bleeding is due to ovarian dysfunction, it is necessary to be sure that the bleeding is not due to an anatomic cause or a coagulation problem (see table 2 above).

Cycles that vary more than 10 days from each other are likely anovulatory.

By far the most important thing that must be done for any patient with abnormal uterine bleeding is to rule out pregnancy.

In general assessment for AUB-O includes as mentioned above, a pregnancy test, thyroid stimulating hormone level, prolactin level, and endometrial biopsy if there is a risk factor for endometrial hyperplasia or malignancy [age is the usual risk factor].

If the endometrial biopsy is insufficient to rule out endometrial hyperplasia or endometrial cancer or other structural problems, then it may be necessary to perform saline infusion sonohysterography, hysteroscopy, or transvaginal ultrasound.

The most common cause of abnormal uterine bleeding in this age group is anovulation. If the bleeding becomes prolonged or excessive it may require pharmacologic therapy.

The risk of endometrial hyperplasia and malignancy in teens is very low. Abnormal uterine bleeding can be due to a coagulation disorders such as von Willebrand disease (if suspected, referral to a hematologist is in order as the diagnosis can be difficult).

Teens who have to be hospitalized for AUB have a 20 to 30% risk of having a coagulation disorder. Indications for hospitalization include the requirement for blood transfusion or presentation with a hemoglobin level of less than 10 g/dL.

Regardless of what the patient tells you, you must test for pregnancy and STDs and sexual trauma.

ACOG (American College of obstetrics and gynecology) recommends that polycystic ovarian syndrome, in this age group, should be looked for clinically by looking for signs of hyper androgen is on physical exam (acne, hirsutism).

It is critical to remember that patients in this age group can become pregnant. And so every woman should have a pregnancy test until one year past her last menstrual period.

The evaluation and treatment of these patients is the same as that of previous groups with one exception. The likelihood of endometrial hyperplasia and endometrial cancer increases in this age group and so endometrial evaluation should be considered.

“Among women aged 40 to 50 years, the incidence of endometrial cancer ranges from 13.6 cases to 24 cases per 100,000 women-years and increases to 87.3 cases per 100,000 in women aged 70 to 74 years. Among women younger than 45 years, there is a lower rate of advanced stage disease, a higher degree of tumor differentiation, and a better prognosis compared with patients older than 45 years. Therefore, all women older than 45 years to present with suspected anovulatory uterine bleeding should be evaluated with endometrial biopsy (after pregnancies been excluded).” (1)

Failure of medical management of presumed Abnormal Uterine Bleeding Secondary to Ovulatory Dysfunction should lead to consideration of evaluation for endometrial hyperplasia or endometrial carcinoma.

What is an adequate evaluation for endometrial hyperplasia or endometrial carcinoma (when evaluation is considered)? There is no consensus among experts.  But the topic is reviewed and resources presented in the post Post-Menopausal Bleeding post (coming soon).

ACOG’s Summary of Recommendations and Conclusions (1)

The following recommendations and conclusions are based on limited or inconsistent scientific evidence (level B):

This entry was posted in Emergency Medicine, Obstetrics and Gynecology, Pediatrics. Bookmark the permalink.