Here are excerpts from Resource (1) below:

Globally, acute coronary syndrome (ACS) still remains one of
the leading causes of mortality and morbidity. Emergency or
early angiography is recommended in suspected ACS with
ST-elevation myocardial infarction (STEMI) or in non-ST elevation ACS (NSTE-ACS) with an intermediate-high Global
Registry of Acute Coronary Events (GRACE) score. The literature suggests that 7–10 % of patients presenting with
STEMI and 10–15 % of patients presenting with NSTEACS have unobstructed coronary artery disease (CAD) on
urgent angiography [1–8].   .   .   .   A recent systematic review of patients presenting with suspected MI and unobstructed coronary arteries by Pasupathy et al. showed an overall all cause mortality of 4.7 % at 12 months [15••].

[And Cardiac MR (CMR) can be very helpful in determining the diagnosis.]

CMR in ACS and Unobstructed Coronaries

Three possible etiologies explain the clinical presentation in
up to 95 % of cases of acute chest pain, elevated troponin, and
unobstructed coronary arteries [16–18, 19••, 20•, 21••, 22•,
23•, 24•, 25•]. These include: (1) acute myocarditis, (2) acute
MI, and (3) cardiomyopathy, in particular Tako-Tsubo cardiomyopathy (TCM). All of these conditions can be easily diagnosed with an appropriately tailored CMR study.

CMR diagnostic accuracy is based on the use of a number
of different sequences, which includes—long- and short-axis
cine, and T2-weighted and late gadolinium enhancement
(LGE) imaging repeated in the same slice positions as the cine
imaging. These three sequences assess the presence of regional wall motion abnormalities and ventricular volumes calculation, presence, and extent of myocardial edema/inflammation
and myocardial scar/fibrosis, respectively. 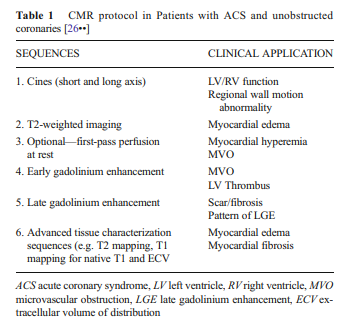 Role of CMR in Diagnosis

Several studies have shown that the commonest underlying
etiology of patients presenting with suspected ACS and unobstructed coronary arteries is myocarditis. The prevalence of myocarditis is variable and ranges from 15 to 75 % [16–18,
19••, 20•, 21••, 22•, 23•, 24•, 25•]. This large variation is
probably due to the CMR imaging sequences being used
and the timing of the scan from the acute presentation.   .   .   .  Endomyocardial biopsy (EMB) still represents the gold standard for the diagnosis of myocarditis. Recently, several studies have validated CMR against EMB [18, 32••, 33], suggesting that CMR can have a promising role in the diagnostic pathway of these patients [34–39].

Recently, a consensus paper has defined the recommendations on the use of CMR in myocarditis [42] which led the
establishment of the “Lake Louise criteria” diagnostic criteria.
In particular, the CMR findings are consistent with the diagnosis of myocarditis if two of three sequences demonstrating myocardial edema, hyperemia, and fibrosis are positive.

Acute MI with unobstructed coronary artery is a common
clinical situation and is the second most common etiology in
this cohort of patients (5–29 %) [16–18, 19••, 20•, 21••, 22•,
23•, 24•, 25•]. Several different patho-physiological mechanisms have been proposed to explain this phenomenon, e.g.
rupture or erosion of a vulnerable plaque (causing transitory
occlusion that resolves spontaneously, without leaving any
residual visible intracoronary lesion), and distal vessels or
small-caliber side branches disease. Other mechanisms including distal embolisation, coronary vasospasm, inflammation, or coronary dissections are rarely associated. Myocardial infarction can be diagnosed on CMR by identifying either a subendocardial or transmural LGE pattern in a typical coronary artery territory [29]. CMR can provide information on whether the myocardial infarction is acute/sub-acute or chronic.

TCM or stress cardiomyopathy is a subtype of MI with unobstructed coronary artery, and defined by the characteristic wall motion abnormality that is, by definition, reversible and transient. The condition usually has a favorable prognosis compared to the other conditions.

Risk Stratification with CMR in ACS with Unobstructed
Coronaries

Clinical presentation of myocarditis can be varied ranging
from benign disease with preserved cardiac function to
more aggressive form associated with severe LV/RV dysfunction (like giant cell myocarditis). Recent literature on
myocarditis delineates its possible malignant side. Myocarditis was the third leading cause of sudden death after hypertrophic cardiomyopathy and congenital/atherosclerotic
coronary artery disease, as demonstrated in a clinical case
series of sudden deaths in young competitive athletes [55].
Myocarditis is responsible for 5 to 20 % of sudden deaths as
demonstrated in the autopsy studies of young adults [56]. It
may also resolve spontaneously without specific treatment
in patients presenting with mild symptoms and minimal
ventricular dysfunction [40••] [but it can progress to dilated cardiomyopathy].   .   .   .   .   . Moreover, normal CMR in patients with clinically suspected myocarditis, is associated with a good prognosis independent of their clinical symptoms and
other findings [58••]. Thus CMR may help to distinguish a benign from malignant form of myocarditis.

CMR can also help in risk stratification in MI. In addition to
help achieving the diagnosis, the better tissue characterization properties allow accurate assessment of infarct size (LGE) and myocardial salvage.   .   .   .    Microvascular obstruction (MVO), characterized by hypoenhanced core within myocardial infarction scar (hyperenhancement) on rest first-pass perfusion or LGE imaging, can occasionally be demonstrated. The presence and extent of MVO after AMI is associated with adverse LV remodeling and poor clinical outcome [62–64], and myocardial segments with MVO at presentation are more likely to develop wall thinning and fail to demonstrate functional recovery [65].

Although TCM is usually considered to be a benign reversible condition, its arrhythmic risk is increasingly recognized. There are promising new CMR analyses which
may help to risk stratify the patients with potential higher
arrhythmic risk [68••].

Deep T-wave inversion and QTc interval prolongation on ECG may be observed in TCM [69•, 70]. Malignant arrhythmias including torsades de pointes (TdP) caused by repolarization abnormalities and QTc prolongation, can be seen in up to 8 % of cases [71••]. In one meta-analysis, sudden cardiac death (SCD) after TCM has been reported in 1.1 % during the index episode, with a further 0.5 % of patients suffering a SCD weeks to months later [72••]. The study primarily looked at the relationship between TCM and ventricular arrhythmias, reviewing a total 816 published cases. VF was reported in 15 cases (prevalence of 1.8 %) and VT was reported in 18 (2.2 %) [72••].

In the context of ACS with unobstructed coronary arteries,
CMR has a potentially important diagnostic role, especially
in distinguishing ischemic from non-ischemic causes, thereby
guiding management. CMR can also potentially help in risk
stratification or prognostication in this cohort. Hence, it
should be strongly considered in all patients presenting with
troponin-positive chest pain with unobstructed coronaries
aiming at achieving a final diagnosis. However, this is yet to
be translated into routine clinical practice, particular within
institutions, which do not have readily access to CMR.

The above article has been cited by 5 PubMed Central articles.

The above article has been cited by 8 PubMed Central Articles.

For information regarding risk levels based on Score, the GRACE Research Group offers more information here.

Linkedin
This entry was posted in Medical News. Bookmark the permalink.