The treatment of pediatric sepsis is straightforward. It consists of IV antibiotics, stat labs, stat fluid bolus, at times a vasopressor or inotrope (in pediatric sepsis usually epinephrine). And then carefully re-evaluation to determine the patient’s response to your therapy.

The problem is that the detection of pediatric sepsis early in its course can be very difficult.

Our goal is to detect cardiopulmonary distress or failure way before they get to uncompensated shock which means they are very close to cardiac arrest.

In EM Cases Episode 93 – PALS Guidelines, March 2017 Drs. Helman, DeCaen, and Crocco discuss a number of important topics from the new PALS guidelines. But in this post, I review the speakers discussion of early recognition of pediatric sepsis.

What follows are my notes of the three speakers’ discussion about the early recognition and treatment of pediatric sepsis in EM Cases Episode 93:

And when [children] are in shock it’s more likely they will be in cold shock, rather than warm shock as we see in adults. Because of their increased sympathetic tone they can hold their blood pressure until they suddenly crump.

And this is probably the most important physiologic difference.

So let’s hear what Dr. McCain has to say about how important it is recognized shock before the blood pressure dumps.

Kids usually have a long period of hypoxia or ischemia that leads to the cardiac arrest.

The one thing that we are striving for is the early recognition of respiratory or cardiac failure and the prevention of cardiopulmonary arrest.

When it comes to the physiology, meaning the progression of the vital signs, the sad reality is that we under-recognize the deteriorating child, often for long periods of time.

Whether it’s on the basis of just not getting the significance of the tachycardia and the tachypnea or that we’re just so caught up in our own anxiety.

But ultimately at the end of the day kids do appear to fall off that precipice very quickly relative to adults.

So I think, ultimately, when it comes to this kid coming into your emergency department – 99% of the way you’re going to win in this case, is that it is all about preparation – Not waiting until the kid crumps but rather early recognition and early preparation [meaning really early treatment].

One of the things that I have struggled, Allen, with this exact issue is we’ve all had cases where we look back and say – well, we could identify this child sepsis whole lot earlier – what have we missed.

And there is no great 100% sensitive screening tool for pediatric sepsis. There is a number screening instruments that can be used but none of them are 100%percent sensitive, so we struggle with that.

Historically PALS and other sources, the APLS book, have given us ranges for different ages for what a normal heart rate and respiratory rate is.

In a recent study that came out, in fact one of my favorite studies that came out in the last decade, was by Fleming that actually did a systematic review of normal heart rate [and ]normal respiratory rate in kids and set up a nice table what that looks like [The chart the speaker suggests using is included below]. But [it] also superimposed the normal variation from PALS on top of that and show that the PALS normal ranges for heart rate and respiratory rate for kids is actually not as accurate as we would like .

And so I would listeners that the first step is going to be identifying tachycardia and make sure that you’re using a resource that is evidence-based.

The second thing that I worry about is what we do with that tachycardia.

So I really want to warn listeners to:

A. Know what tachycardia is. Use an evidence-based approach to that.
B. Don’t ignore children with tachycardia and just chalk it up to something benign. Think of sepsis.

When you talk about sensitivity and specificity, the things that we teach when it comes to recognizing the child in extremis like the kid that is septic, we’re talking about heart rate, capillary refill, pulse strength – any of these things individually are incredibly nonspecific.

But the sensitivity is great. What ends up happening is that as you start layering on more and more of these findings on top of each other, that’s where it becomes much more specific.

Still, at the end of the day, there is going to be a significant number of kids that honestly – you come back an hour later and you say well he’s a lot better. And I don’t think it was actually the 20 per kilo of fluid that I gave that made the difference.

So I guess what I’m getting at is that there does end up being a chance of overreacting or of over-treating. And I think that for the vast majority of the kids that we are working with – that’s okay in our system. Because I think that the risk ends up being that if we don’t end up having that tendency to over diagnose a little bit when it comes to the kid in extremis, the risk does end up being that we miss the diagnosis in a kid where it really does matter.

So I guess, bottom line is don’t underestimate your own visceral reaction, your own gut feeling. And number two is when you think back on everything that you learned in PALS, it is not just about a heart rate it’s not just about capillary refill; the more of these things that you can superimpose on on top of each other, the more of them that are there in one patient – [then] the more likely is that that child is very sick.

But at the end of the day, yes, there is a risk that you will have overtreated some of these kids. But, I think, better that than not treating them and missing a critical opportunity.

And one of the other speakers continues: Yes, I agree. So if you’re seeing the child who is now hypotensive it’s very late in the game and we have missed an opportunity. Now that may not be our fault, maybe it’s because they’re presenting late.

But we should not wait for hypotension to define severe sepsis in children. We should be trying to pick that up sooner with either vital signs or a gestalt feeling.

And sometimes it boils down to me saying in my mind, you know what, I have a bad feeling about this child. I don’t like the story. The kid is looking at me the wrong way. And I’m going to work up this kid and sometimes that’s all I’ll go on. Just because there is something triggering this. 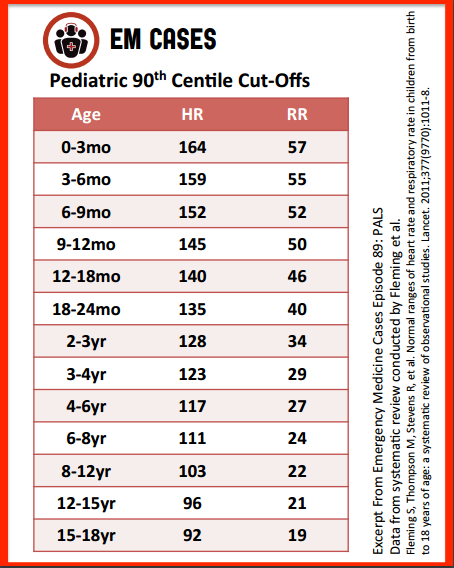 What follows below is from the show notes of Episode 93:

One of the main reasons that we sometimes tend to under-recognize the deteriorating child is because their blood pressure often remains normal until they suddenly crash and arrest. Because of their high sympathetic tone, children can maintain a seemingly normal blood pressure longer than an adultwould, making hypotension a very late finding in a critically ill child. This can make early recognition of sepsis more challenging in children. The keys to early identification of pediatric sepsis lies in the heart rate and respiratory rate, both of which will increase disproportionately to the fever in sepsis. We must consider tachycardia an early warning sign for sepsis. While individual vital signs are sensitive but not specific, multiple abnormal vital signs taken together have an improve specificity for sepsis.

Assessing whether or not a child is tachycardic and tachypneic is vital in weighing your suspicion for shock. The acceptable upper limit of heart rate changes as children get older. A number of resources have published ranges of acceptable heart and respiratory rates for different age groups. A commonly used resource is the PALS guidelines. In 2011, Fleming et al. published a systematic review in The Lancet, describing normal heart and respiratory rate for children based on existing published data. They compared their findings with the PALS ranges and found that PALS ranges were higher than both the median and 90th percentiles obtained in the systematic review. Our experts advocate using the more conservative values from the systematic review when evaluating a child for signs of shock. 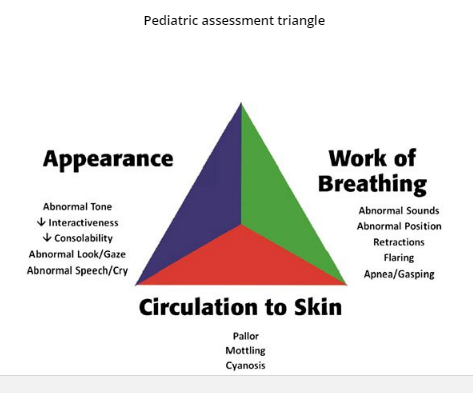