In our study, there was an overall 4.41:1 male to female incidence ratio. Incidence in females was decreasing the entire time from 2001 to 2015, whereas in males the incidence was initially increasing; however, after 2006 the incidence started to decrease at a rate greater than that in females. The overall incidence of EAC, when stratified by race, showed that blacks had the greatest overall incidence but that the incidence was also decreasing at the fastest rate. As above, an important risk factor for the development of ESCC is smoking. Over the years, blacks have had the steepest decline in smoking rates [10, 11]. Thus, our findings can possibly be explained by the decreasing incidence of ESCC due to declining smoking prevalence [10, 11].

In our study evaluating the incidence of esophageal cancer in all 50 states, we found that the overall incidence is greatest in males, blacks, distant disease, EAC, and those in the Midwest with EAC. We also found that for race, black individuals have the fastest decline in incidence and that for the stage at diagnosis, regional disease is on the rise. Moreover, although the overall incidence of EAC has started to decline in the US, there is still a significant overall incidence of EAC in the Midwest and a rising incidence in the Northeast, which may be related to higher rates of obesity in these areas. Our study is the first to evaluate esophageal cancer incidence in all 50 states and provides important trends and risk factors for the development of this cancer. Ultimately, we will need to use this data to improve surveillance guidelines for at-risk populations.

Esophageal cancer is a disease in epidemiologic transition. Until the 1970s, the most common type of esophageal cancer in the United States was squamous cell carcinoma, which has smoking and alcohol consumption as risk factors. Since then, there has been a steep increase in the incidence of esophageal adenocarcinoma, for which the most common predisposing factor is gastroesophageal reflux disease (GERD). See the image below.

Cascade of events that lead from gastroesophageal reflux disease to adenocarcinoma. 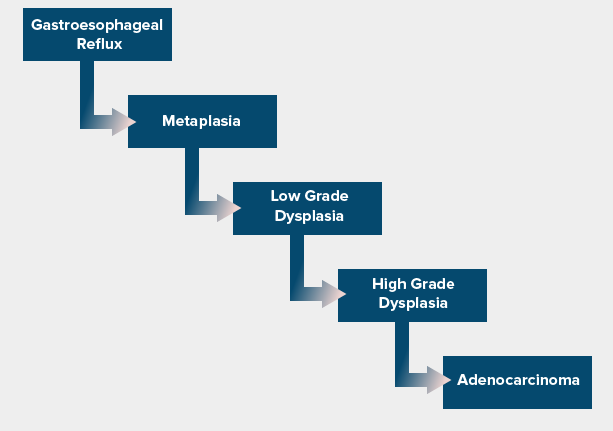 Presenting signs and symptoms of esophageal cancer include the following:

Physical findings include the following:

Imaging studies used for diagnosis and staging include the following:

This entry was posted in Oncology. Bookmark the permalink.