In this post I link to and excerpt from Resource (1) below, Euglycemic Diabetic Ketoacidosis, last update Jan 31, 2020 from StatPearls. This is Part 1 – Diagnosis

Euglycemic DKA (EDKA) is a clinical syndrome occurring both in type 1 (T1D) or type 2 (T2D) diabetes mellitus characterized by euglycemia (blood glucose less than 250 mg/dL) in the presence of severe metabolic acidosis (arterial pH less than 7.3 and serum bicarbonate less than 18 mEq/L) and ketonemia. DKA is one of the most severe and life-threatening complications of diabetes mellitus and can be seen in a variety of conditions. The incidence of EDKA, however, has grown with the introduction of sodium-glucose transporter 2 (SGLT2) inhibitors.[1] It also presents a diagnostic challenge for physicians due to the variety of etiologies and normal blood glucose levels, often resulting in delayed diagnosis.[2][3]

There are many known causes of EDKA in patients with diabetes. The overall mechanism is based on a general state of starvation, resulting in ketosis while maintaining normoglycemia. Therefore, conditions like anorexia, gastroparesis, fasting, ketogenic diet, and alcoholism can lead to states of carbohydrate starvation and resultant ketosis. Additional triggers for EDKA include pregnancy, pancreatitis, glycogen storage disorders, surgery, infection, cocaine toxicity, cirrhosis, and insulin pump use.[4][5] T1D bariatric surgery patients experience DKA in over 20% of postoperative cases and may be especially prone to EDKA.[6]

The underlying mechanism of EDKA is secondary to a carbohydrate deficit resulting in generalized decreased serum insulin and excess counter-regulatory hormones like glucagon, epinephrine, and cortisol. The increased glucagon/insulin ratio leads to increased lipolysis, increased free fatty acids, and ketoacidosis.[2][7][10] Ketone body production in EDKA is similar to DKA with acetoacetic acid, beta-hydroxybutyric acid (after acetoacetic acid reduction), and acetone (after acetoacetic acid decarboxylation). The resulting anion gap metabolic acidosis triggers respiratory compensation and sensation of dyspnea, as well as nausea, anorexia, and vomiting. Volume depletion resulting from decreased oral intake, vomiting, and osmotic diuresis from glucosuria, further exacerbates elevations in glucagon, cortisol, and epinephrine, worsening lipolysis and ketogenesis. Additionally, decreased gluconeogenesis by the liver, as in fasting where hepatic glycogen is already depleted, or increased glucosuria by the kidneys, contribute to EDKA.[3]

Often the insulin-using diabetic patient does not recognize their symptoms as DKA because serum glucose is not elevated, and maintains or decreases their insulin dose.[1] If insulin dosing is adequate for glucose levels, it will prevent gluconeogenesis, resulting in euglycemia. EDKA can be considered a “partially treated DKA” in this setting.[7]

SGLT2 inhibitors (empagliflozin, canagliflozin, dapagliflozin) are a newer class of antidiabetic drugs that increase the risk of EDKA unrelated to the duration of exposure.[13][15]

The use of SGLT2 inhibitors in T1D is not recommended by the U.S. Food and Drug Administration but discouraged because the risk of ketone-associated effects can be as high as 9%.[1]

Pregnancy is a risk factor for EDKA because of the physiologic state of hypoinsulinemia and increased starvation. Increased levels of cortisol and placental lactogen result in insulin resistance, and episodes of vomiting or fasting can lead to exaggerated starvation ketosis.[24] Respiratory alkalosis leading to bicarbonate loss in the urine exacerbates the acidosis.[25] These factors, taken together, can result in starvation, euglycemia, and ketoacidosis by the previous mechanisms described.[2]

Alcoholic ketoacidosis may have a very similar presentation as EDKA, with anorexia, vomiting, dyspnea, and significant anion gap metabolic acidosis and ketonemia. Some consider alcoholic ketoacidosis as a subtype of euglycemic DKA, and both are associated with increased glucagon/insulin ratio.[1][7][12] The differentiating factors are that alcoholic ketoacidosis patients do not have diabetes or using diabetic medications, more commonly present with hypoglycemia, and after a severe alcohol binge.[22] Similarly, excessive alcohol consumption in a person with diabetes can destroy pancreatic beta cells, decreased gluconeogenesis, and decreased glycogen stores. Coupled with vomiting, and carbohydrate starvation results, again, accelerated lipolysis, ketoacidosis, and EDKA.[2][7]

An ill-feeling patient with diabetes with symptoms such as malaise, dyspnea, nausea, or vomiting should undergo screening with serum pH and blood or urine ketone testing.[3][26]

The initial laboratory evaluation of EDKA includes basic electrolytes, glucose, calcium, magnesium, creatinine, BUN, serum and urine ketones, beta-hydroxybutyric acid, arterial, or venous blood gas analysis, lactic acid, chest radiograph, and electrocardiogram. Urine screening for ketones with nitroprusside reagent does not measure beta-hydroxybutyrate but does detect acetone and acetoacetate. Serum levels of beta-hydroxybutyrate are typically greater than 3 mmol/L in EDKA (normal values less than 0.5 mmol/L). If an infection is on the differential, consider CBC with differential white blood cell count and blood cultures. Serum osmolality, to assess for an osmolar gap, and toxic alcohols should be sent to rule out toxic alcohol ingestion when suspected in any patient with severe, unexplained anion gap metabolic acidosis. Close attention should be paid to the anion gap, to help narrow direct diagnosis, workup, and management.

As described previously, the patient will have normoglycemia (capillary blood glucose less than 250 mg/dL) in the presence of metabolic acidosis (pH less than 7.3), and a total decreased serum bicarbonate (less than 18 mEq/L). Serum and urine ketones must be elevated to make the diagnosis of EDKA. Lactic acid may be elevated, but should not account entirely for the elevation in anion gap. Leukocytosis may be present in the case of a concurrent infection; however, it is nonspecific and could also be due to hemoconcentration or stress, among other causes. Potassium levels will vary, but great attention should be paid to the level before starting therapy, as total body potassium is usually depleted. Hypomagnesemia and hypophosphatemia can be seen in the starvation state due to decreased total intake and increased losses. Mild hyponatremia may also be seen but is generally less severe than the “pseudo-hyponatremia” seen in profound hyperglycemic states.

See also the resources below.

Here is the abstract from above:

Euglycemic diabetic ketoacidosis (EDKA) is a clinical triad comprising increased anion gap metabolic acidosis, ketonemia or ketonuria and normal blood glucose levels <200 mg/dL. This condition is a diagnostic challenge as euglycemia masquerades the underlying diabetic ketoacidosis. Thus, a high clinical suspicion is warranted, and other diagnosis ruled out. Here, we present two patients on regular insulin treatment who were admitted with a diagnosis of EDKA. The first patient had insulin pump failure and the second patient had urinary tract infection and nausea, thereby resulting in starvation. Both of them were aggressively treated with intravenous fluids and insulin drip as per the protocol for the blood glucose levels till the anion gap normalized, and the metabolic acidosis reversed. This case series summarizes, in brief, the etiology, pathophysiology and treatment of EDKA.

Background: The sodium-glucose cotransporter-2 (SGLT2) inhibitors are the newest class of anti-hyperglycemic
medications used in the treatment of diabetes mellitus. Their increasing use has been driven by their apparent
cardiovascular and renal benefits. They have been associated with a small but significantly increased risk of diabetic
ketoacidosis (DKA). Many of the cases of DKA associated with SGLT2 inhibitor use present with normal or minimally
elevated serum glucose levels, often delaying the diagnosis.

Case presentation: A 44-year-old woman with diabetes mellitus presented to our emergency department
complaining of 3 days of generalized weakness. The SGLT2 inhibitor canagliflozin had been added to her medication regimen 4 weeks earlier, and she had stopped using insulin 2 weeks prior to presentation. Laboratory evaluation revealed a metabolic acidosis with an elevated anion gap and the presence of serum acetone, despite a minimally elevated serum glucose of 163 mg/dL. The patient was treated for euglycemic DKA with intravenous infusions of insulin and dextrose, with resolution of her symptoms in 3 days.

Conclusions: The SGLT2 inhibitors are a novel class of anti-hyperglycemic medications that are being used with increasing frequency in the treatment of diabetes mellitus. They are associated with a small but significantly increased risk of DKA. Many of the patients presenting with DKA associated with SGLT2 inhibitor use will have normal or minimally elevated serum glucose levels. This unusual presentation of DKA can be diagnostically challenging.

DKA in the setting of SGLT2 inhibitor use occurs in patients with type 1 DM with an incidence of 9.4% [15]. It is much less common when used in type 2 DM, with an incidence less than 0.2% [16, 17]. Several small case series and meta-analyses have reported on the characteristics of DKA associated with SGLT2 inhibitor use [10, 17–24]. DKA occurring in the setting of SGLT2 inhibitor use typically presents with minimal hyperglycemia, resulting in a delay of the appropriate diagnosis in over 50% of cases [18]. Reported median glucose values in these cases range from 211 to 328 mg/dL [20, 22, 23]. 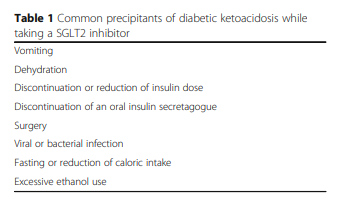 Patients with EDKA in particular may not manifest symptoms of dehydration to the degree of other DKA patients, given the lack of hyperglycemia [25, 26]. A recent US FDA review of adverse events associated with SGLT2 inhibitor use reported a
fatality rate of 1.54%, as compared with 0.4% for all DKA cases [19, 27].

EDKA associated with SGLT2 inhibitor use should be
treated in a similar fashion as other types of DKA, but
with consideration of the lack of hyperglycemia. Initial
treatment is directed towards volume resuscitation with
isotonic saline. The initial fluid replacement should be
followed by continuous intravenous insulin infusion at a
rate of 0.02–0.05 units/kg/h [3]. Dextrose-containing
fluids should be started along with the insulin infusion to
avoid hypoglycemia, with a target serum glucose level of
150–200 mg/dL. Serum electrolytes and glucose levels
should be monitored closely during the treatment course.
Resolution of EDKA is identified by the presence of two of
the following: a serum bicarbonate level ≥ 15 mmol/L, an
anion gap ≤ 12 mmol/L, or a venous pH > 7.3 [3].

Here is the abstract from above:

Diabetic ketoacidosis (DKA) is one of the most serious complications of diabetes. It is characterised by the triad of hyperglycemia (blood sugar >250 mg/dl), metabolic acidosis (arterial pH <7.3 and serum bicarbonate <18 mEq/L) and ketosis. Rarely these patients can present with blood glucose (BG) levels of less than 200 mg/dl, which is defined as euglycemic DKA. The possible etiology of euglycemic DKA includes the recent use of insulin, decreased caloric intake, heavy alcohol consumption, chronic liver disease and glycogen storage disorders. DKA in pregnancy has also been reported to present with euglycemia. The recent use of sodium glucose cotransporter 2 (SGLT2) inhibitors has shed light on another possible mechanism of euglycemic DKA. Clinicians may also be misled by the presence of pseudonormoglycemia.

Euglycemic DKA thus poses a challenge to physicians, as patients presenting with normal BG levels in ketoacidosis may be overlooked, leading to a delay in appropriate management strategies. In this article, we review all the possible etiologies and the associated pathophysiology of patients presenting with euglycemic DKA. We also discuss the approach to diagnosis and management of such patients. Despite euglycemia, ketoacidosis in diabetic patients remains a medical emergency and must be treated in a quick and appropriate manner.

This entry was posted in Diabetes, Endocrinology, StatPearls. Bookmark the permalink.