Evaluation and Management of Pediatric Bloody Diarrhea – Help From The BMJ

These two charts from the article below are heart of the matter as far as the evaluation of pediatric bloody diarrhea: 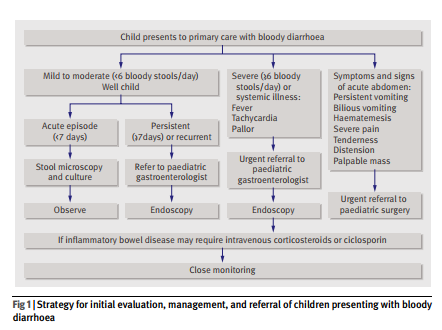 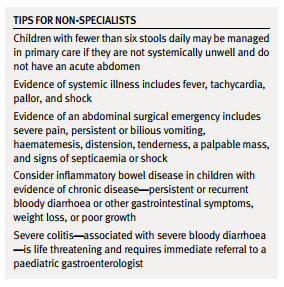 What follows are some excerpts from Management of bloody diarrhoea in children in primary care from the British Medical Journal:

What are the most likely causes of bloody diarrhoea in
children?

The likely diagnoses vary depending on age (box). At every age intestinal bacterial infections are an important cause. Inflammatory bowel disease may occur at any age but is more likely in older children (>1 year). In young infants non-specific (perhaps allergic) colitis is most likely. Other conditions are rarer but should be considered as they can be serious and even life threatening.

How common is infection compared with inflammatory bowel disease?

This is an important question because if it is assumed that bloody diarrhoea is caused by infection then inflammatory bowel disease will be missed. Because of this common assumption, children with inflammatory bowel disease often experience a delay in diagnosis.1 In the United Kingdom, the most likely causative infective agents are species of Campylobacter, Salmonella, and Yersinia. Much less often, Shigella, types of Escherichia coli that produce shiga toxin (such as E coli 0157:H7), and other organisms are responsible. In the
developing world other disorders including bacterial (Shigella) and amoebic (Entamoeba histolytica) dysentery are important. This should be considered in those who have recently been overseas.

Determining the incidence of infection as a cause of bloody diarrhoea is not simple, but an estimate can be made. A prospective cohort study in the UK found that 1:30 people (adults and children) presented to their general practitioner annually with gastroenteritis.2 Bacterial gastroenteritis was confirmed in a minority of cases. The annual incidences of specific bacterial isolates (per 1000 population) were Campylobacter 4.14 (95% confidence interval 3.34 to 5.13), Salmonella 1.57 (1.19 to 2.06), Yersinia 0.58 (0.42 to 0.88), Shigella 0.27 (0.16 to 0.47), and E coli 0157:H7 0.03 (0.01 to 0.11). Reports to the UK Health Protection Agency’s centre
for infections suggest that about 15% of Campylobacter,
30% of Salmonella, and 50% of Yersinia infections are in children (www.hpa.org.uk). Thus, in a primary care setting the annual incidence of these bacterial infections in children may be around 1.5 per 1000. About 50-75 per 100 000 of children will develop bloody diarrhoea with these infections. 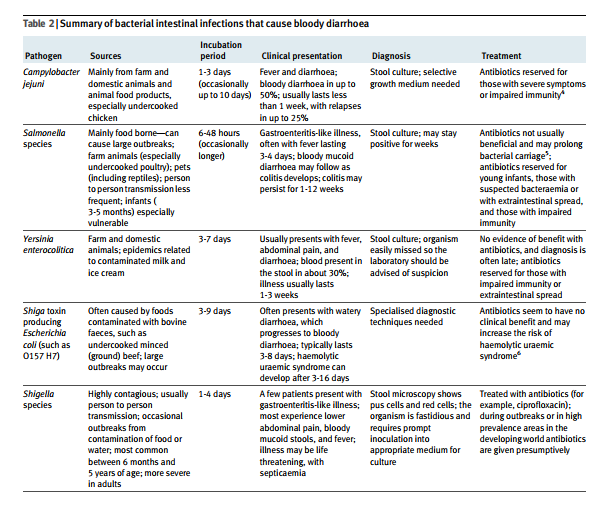 How should I investigate and manage bloody diarrhoea in primary care?

An appropriate strategy must take into account the severity  symptoms or signs of systemic illness or abdominal complications. Figure 1 outlines an approach to management, with suggested indications for specialist referral.

When should I suspect inflammatory bowel disease?

Inflammatory bowel disease is uncommon in children, but prompt diagnosis is important. The interval from onset to diagnosis is often prolonged, andthis can result in avoidable morbidity.1 3 In a study of children presenting to a tertiary centre, even though 75% of those with ulcerative colitis had persistent or recurrent bloody diarrhoea, the mean time to diagnosis was 20 weeks (table 3). 1 Although infection may be the first consideration, the possibility of inflammatory bowel disease should not be dismissed even in young children.  Around half of children with inflammatory bowel disease present before 11 years of age, and the disease may occur even in the first year of life. If any symptoms suggest chronic gastrointestinal disease, inflammatory bowel disease should be considered (table 2). Persistent (more than seven days) or recurrent bloody diarrhoea are indications for referral to a paediatric gastroenterologist. Other important signs include impaired growth, weight loss, finger clubbing, and—in Crohn’s disease oral or perianal abnormalities. Perianal disease occurs in up to 45% of people with Crohn’s disease.1 3

How should I screen for inflammatory bowel disease?

[There aren’t any good screening tests for inflammatory bowel disease in patients with bloody diarrhea.] . In the absence of an identified stool pathogen, endoscopic evaluation is required in children with severe or persistent symptoms (fig 1) above. 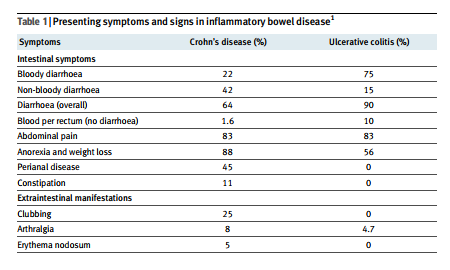 How can I recognise and manage severe colitis?

Severe bloody diarrhoea (more than five bloody stools
daily) requires urgent referral to a paediatric gastroenterologist. Severe colitis is associated with anincreased risk of non-response to medical treatment, progression to toxic megacolon, and colonic perforation. Early referral may reduce these risks. Intravenouscorticosteroids or ciclosporin are often effective in severe disease, and children need expert monitoring for signs of deterioration. In some cases emergency colectomy may be life saving.

Which diagnoses are most likely in infants?

Infant colitis
Colonoscopy often shows mucosal inflammation and
ulceration in infants who present with bloody diarrhoea.
Although cows’ milk allergy is usually suspected,
the aetiology is often uncertain. Allergy is
probably overdiagnosed.9 10 Many infants with bloody
diarrhoea are breast fed and have “breast milk colitis.”
In these cases, it has been proposed that small but
immunologically relevant amounts of intact maternal
dietary antigens might be transferred to breast milk via
the mother’s bloodstream. However, this hypothesis
has not been confirmed. A recent study of 40 infants
presenting with blood in the stool provided a useful
insight.10 The mean age at presentation was 3 months (range 1 6). The stools were watery in 38% and mucoid in 73%. Colonoscopy showed mucosal aphthae (33%), microscopic inflammation (33%), and focal eosinophilic infiltration (23%). The infants were randomly allocated to a cows’ milk-free diet (n=19) or a normal diet (n=21), with breastfeeding mothers in the first group adopting a cows’ milk elimination diet. They were reviewed at one and 12 months. During followup,
bleeding was often intermittent, with an average time to the final episode of 24 days (range 1-85). All of the infants thrived. Cows’ milk elimination did not affect the duration of bleeding, and re-challenge supported a diagnosis of cows’ milk allergy in only 18%. The authors concluded that infant colitisis usually
a benign self limiting disorder.

Necrotising enterocolitis is a serious disorder, rarely seen in primary care. It is characterised by diffuse or focal ulceration and necrosis in the small intestine and colon, and it may present with rectal bleeding or bloody diarrhoea. Other common features include abdominal distension, bilious vomiting, and signs of septicaemia. It mainly occurs in premature infants in the neonatal unit, although it can develop at any time up to 10 weeks of age.Moreover, up to 10% of cases are in full term infants.11 In such cases, predisposing factors such as cardiac disease may be present.11 12 When necrotising enterocolitis does occur in full term infants, the onset is usually within the first week of life.11 13 If it is suspected then urgent hospital referral is necessary. Abdominal radiography may show features to support the diagnosis.

Hirschsprung’s disease (congenital absence of ganglion cells in the colon) occurs in 1:5000 live births. About 80% of affected children present in the first year of life. In more than 90% of affected infants the passage of meconium is delayed beyond the first 24 hours. The classic presentation is with constipation.

However, 25% of infants present with enterocolitis causing abdominal distension, and severe watery and sometimes bloody diarrhoea.14 This may cause hypovolaemic shock and colonic perforation, and mortality is 33% in these patients.15 Early diagnosis is therefore essential.

What other disorders should I consider?

Any disorder that leads to mucosal ischaemia can cause bloody diarrhoea.

Bloody diarrhoea can indicate a major surgical emergency. Intussusception occurs most often but not exclusively in the first year of life. The classic presentation is with episodic abdominal pain, vomiting, and the passage of blood and mucous. In some cases bloody diarrhoea is reported.16 In infants and children with congenital gut malrotation, midgut volvulus may result in extensive intestinal gangrene. This catastrophic event typically presents with symptoms of obstruction including bilious vomiting. Again, however, bloody diarrhoea may be reported.17

Henoch-Schönlein purpura
Henoch-Schönlein purpura is a common form of
idiopathic systemic vasculitis in children. It is associated
with a characteristic rash (easily overlooked),
abdominal pain, arthralgia, and overt or microscopic
haematuria.18 Overt gastrointestinal bleeding occurs in
25% of patients and bloody diarrhoea is sometimes
seen.19