The following post consists of excerpts from Resource (1) below: 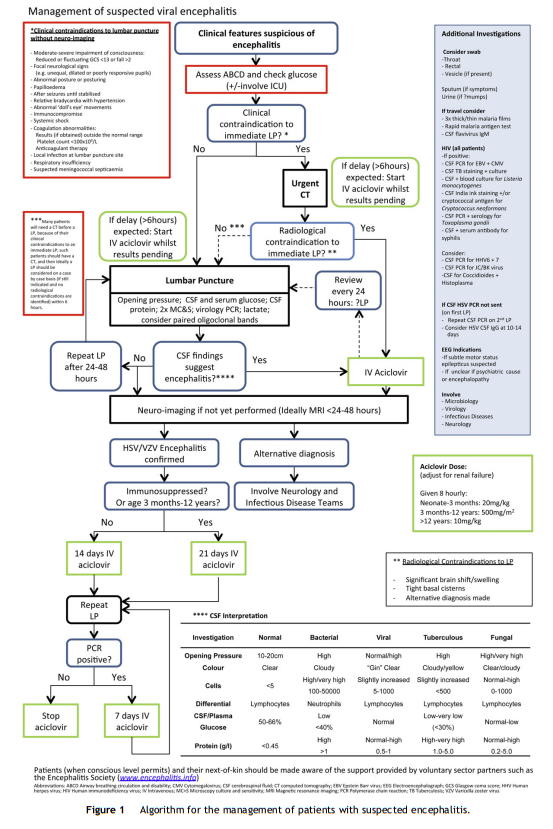 The chart above is enlarged below for clarity: 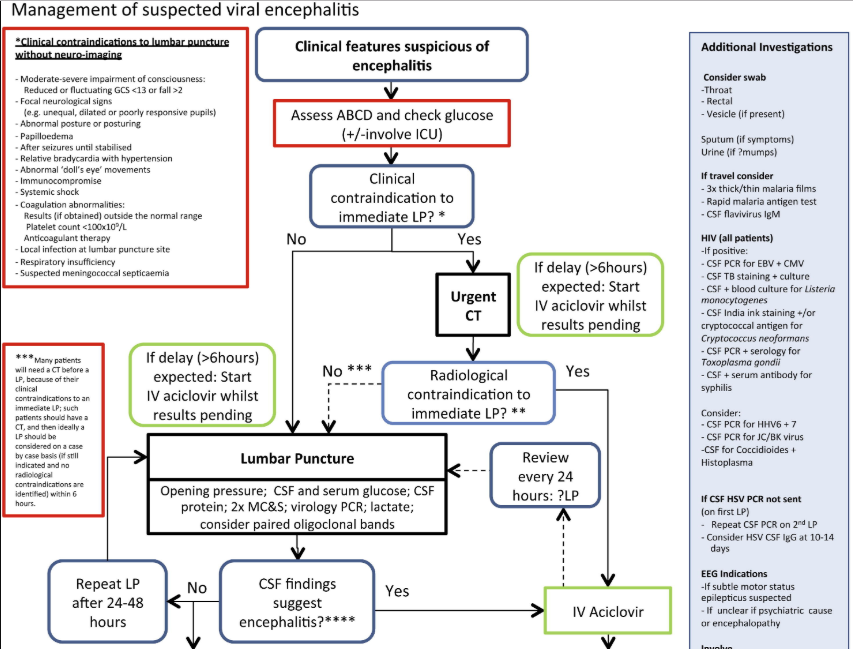 Although encephalitis is a relatively rare, its importance
lies in that fact that for many forms treatment is effective
if started promptly; in contrast, delays in treatment can be
devastating. Encephalitis means inflammation of the brain
parenchyma, and strictly speaking this is a pathological
diagnosis. However, because of the obvious practical
limitations of this, surrogate clinical markers of inflammation are used (Table 1. Definitions). 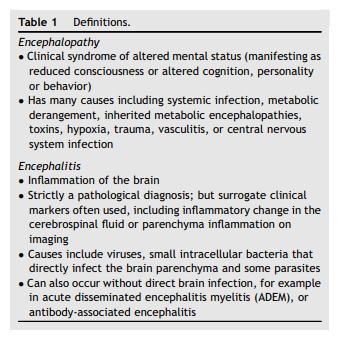 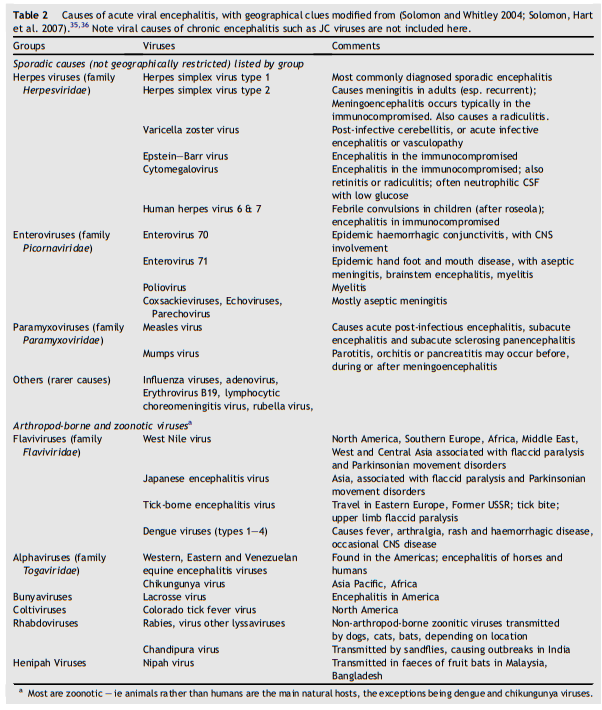 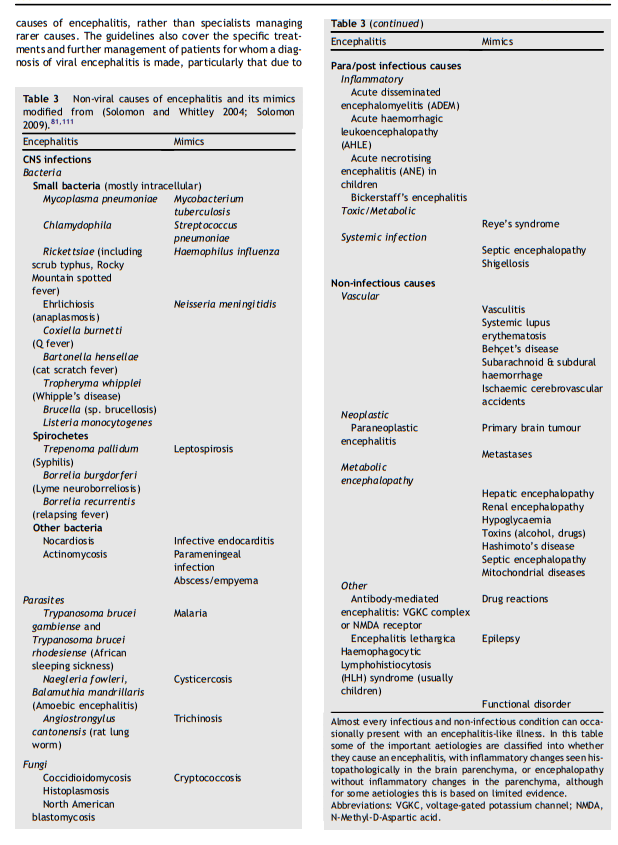 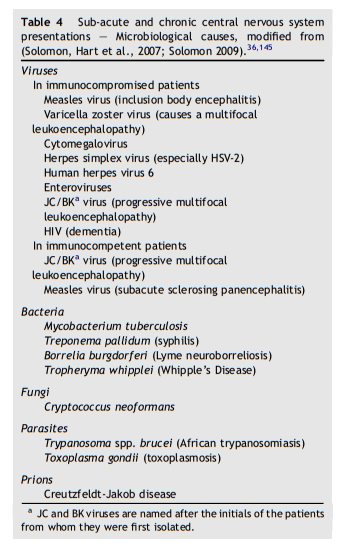 Which clinical features should lead to suspicion of
encephalitis? How do they differ from other encephalopathies? And can they be used to
diagnose the underlying cause? 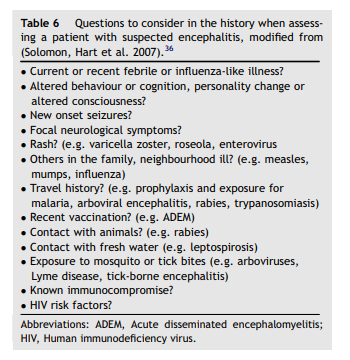 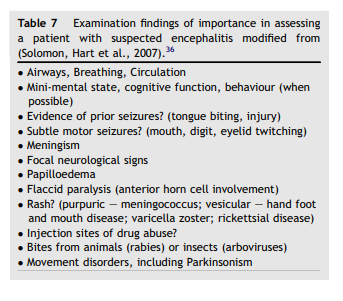 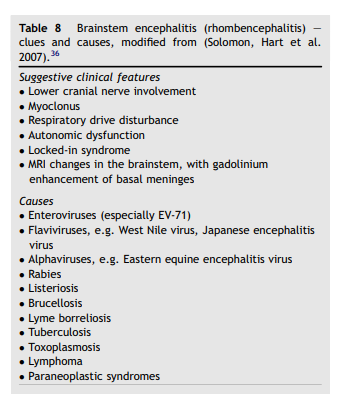 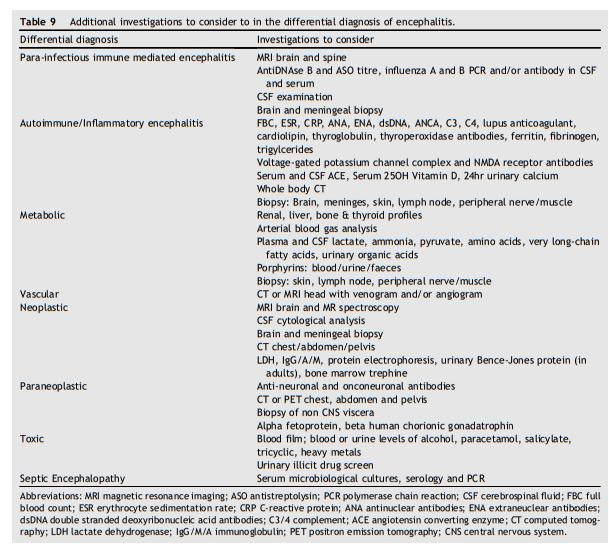 Which patients with suspected encephalitis should
have a lumbar puncture? And in whom should this
be preceded by a computed tomography scan?

What information should be gathered from the LP

What virological investigations should be
performed ? 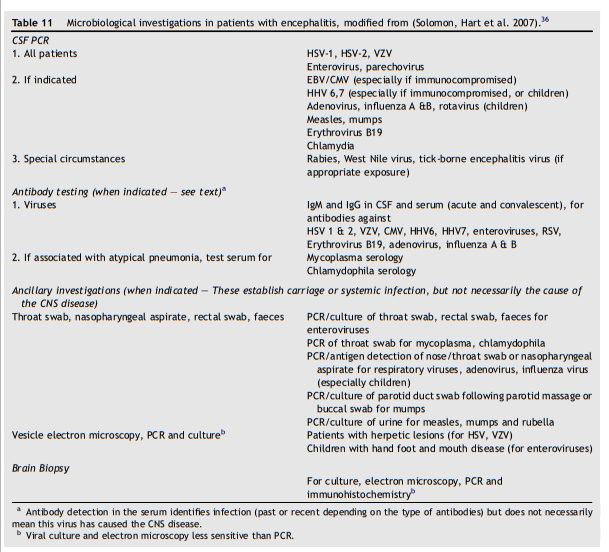 What antibody testing should be done on serum and
CSF?

What PCR/culture should be done on other samples
(e.g. throat swab, stool, vesicle etc)?

Which patients with encephalitis should have a HIV
test?

What is the role of magnetic resonance imaging (MRI) and other advanced imaging techniques in adults with suspected viral encephalitis?

Which adults with suspected viral encephalitis
should have an electroencephalogram (EEG)?

What is the role of brain biopsy in adults with
suspected viral encephalitis?

For which patients should aciclovir treatment be
started empirically?

What should be the specific management of VZV
encephalitis?

What should be the specific management of
enterovirus meningoencephalitis?

How does the management of suspected
encephalitis in the returning traveller differ?

What differences are there in the management of
suspected encephalitis in the immunocompromised?

Evidence
In patients with an acute or more commonly sub-acute
onset of encephalitis, immune-mediated encephalitis
should be considered as the treatment is very different
and early intervention may significantly improve
outcome.138e140

The above article has been cited by 50 articles in PubMed Central.

(2) SUMMARY DOCUMENT: Management of Suspected Viral Encephalitis in Adults – Association of British Neurologists and British Infection Association National Guidelines [Link is to the Word download – this file can also be opened with OpenOffice which is free].