In addition to the resource below, here are two CDC resources on Lyme Disease:

In this post I link to  Suggested Reporting Language, Interpretation and Guidance Regarding Lyme Disease Serologic Test Results [PDF], May 2021, from The Association Of Public Health Laboratories.

Lyme disease is characterized by protean manifestations, including potential development of dermatologic, rheumatologic, neurologic and cardiac abnormalities. The most
common clinical marker for early Lyme disease is erythema migrans (EM), which occurs in 60%-80% of patients. EM is defined as a skin lesion that typically begins as a red macule or papule and expands over a period of days to weeks to form a large (reaching diameters of up to 30cm) round lesion, often with partial central clearing. Secondary lesions also may occur.13 Annular erythematous lesions occurring within several hours of a tick bite typically represent hypersensitivity reactions and do not qualify as EM. Patients who have a typical EM lesion, identified by a physician, and who live in or have traveled to a Lyme-endemic area can be diagnosed with acute Lyme disease without laboratory diagnostic support as EM lesions are considered pathognomonic of infection. Importantly, diagnostic testing of patients presenting with EM lesions is not recommended due to insensitivity of serologic assays during this acute stage of infection.5

Later signs and symptoms of Lyme disease may appear days to months after a tick bite. Symptoms of early dissemination can manifest as additional EM rashes on other areas of the body. Although less frequent, dissemination at any time following infection can result in neuroinvasive Lyme disease, including lymphocytic meningitis, facial nerve palsy or radiculoneuropathy. Lyme carditis, characterized by atrioventrical (AV) heart block, may also occur and, left untreated, can result in sudden death. Hallmarks of later stages of disease include arthritis accompanied by severe joint pain and swelling, particularly in the knees and other large joints. Serologic testing by STTT has shown to be both sensitive (>87%) and specific (99%) for manifestations of disseminated Lyme disease11 and can provide strong support for diagnosis.

It is important for healthcare providers to order Lyme disease testing only when there is existing clinical and epidemiological support for a diagnosis.14 Lyme disease should be considered based on the presence of typical signs and symptoms of infection in patients with a history of possible exposure to infected blacklegged ticks. Serologic tests using FDA-cleared methods and recommended interpretive criteria should be used.11 Existing tests for Lyme disease are sensitive and specific if performed as recommended at appropriate times post-infection or for manifestations of disseminated disease. False positive tests do occur, primarily in cases with a low prior probability
of Lyme disease, such as for patients without likely exposure to infected blacklegged ticks (e.g., exposure to ticks only in areas of low incidence of Lyme disease).15 Similarly,
false negative results may occur in patients who are tested too soon following infection, at which point the patient’s serologic response has not developed and is therefore
not yet detectable. Testing of patients who do not have symptoms typical of Lyme disease or who have not had the potential for exposure to ticks in a Lyme-endemic region,
is strongly discouraged. Just as it is important to correctly diagnose Lyme disease in a patient who has the disease, it is equally important to avoid misdiagnosis of Lyme
disease and unnecessary treatment when the true cause of illness is something else. The intent of this document is to clearly outline scenarios when Lyme disease testing is necessary, as well as outline proper application of the STTT or MTTT for testing of human samples. Additionally, recommended standard reporting language for the STTT and MTTT is provided, with an emphasis on clear and concise interpretations to provide clarity for clinicians, laboratorians and patients.

The STTT begins with an immunoassay detecting IgM or IgG antibodies to B. burgdorferi. Either an enzyme immune assay (immunoassay) or, newer generation (e.g., lateral flow,
fluorescence and chemiluminescence) assays available on other platforms can be performed. If the immunoassay(s) are negative, no further testing is necessary. If the total IgM/IgG
immunoassay, or either one or both of the first tier IgM and IgG immunoassays are positive or equivocal, reflex testing by immunoblot is required. For samples collected from patients with symptoms lasting 30 days or less, both IgM and IgG specific anti-B. burgdorferi immunoblots should be performed and interpreted to guide clinical decisions. For samples collected
over 30 days post symptom onset, only the anti-B. burgdorferi IgG immunoblot should be performed or interpreted. For detailed information regarding result interpretation, please see
Table 1a (total IgM/IgG immunoassay) or Table 1b (separate IgM and IgG immunoassays). 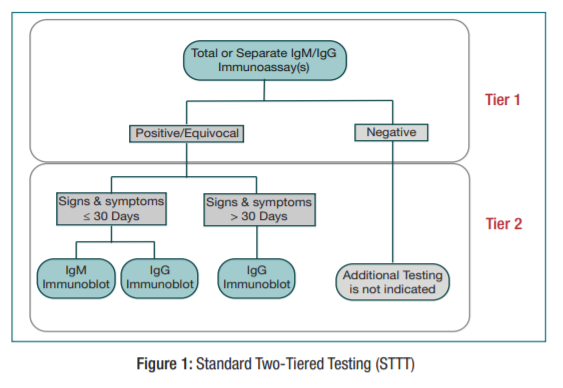 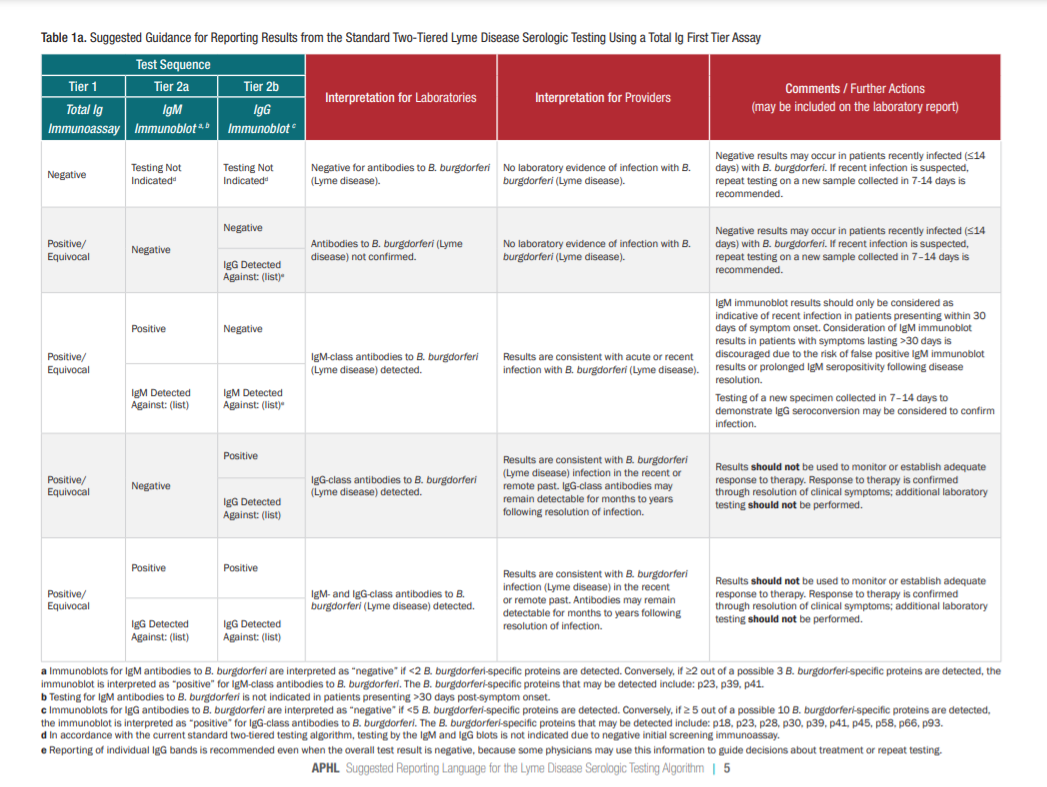 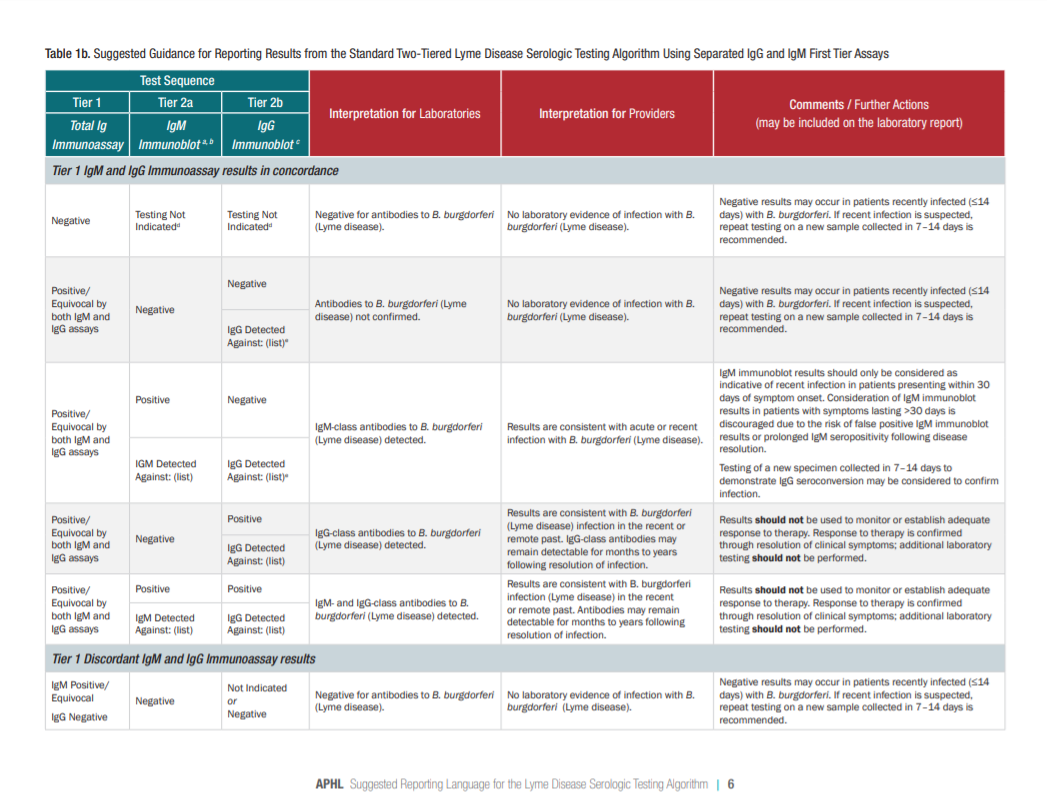 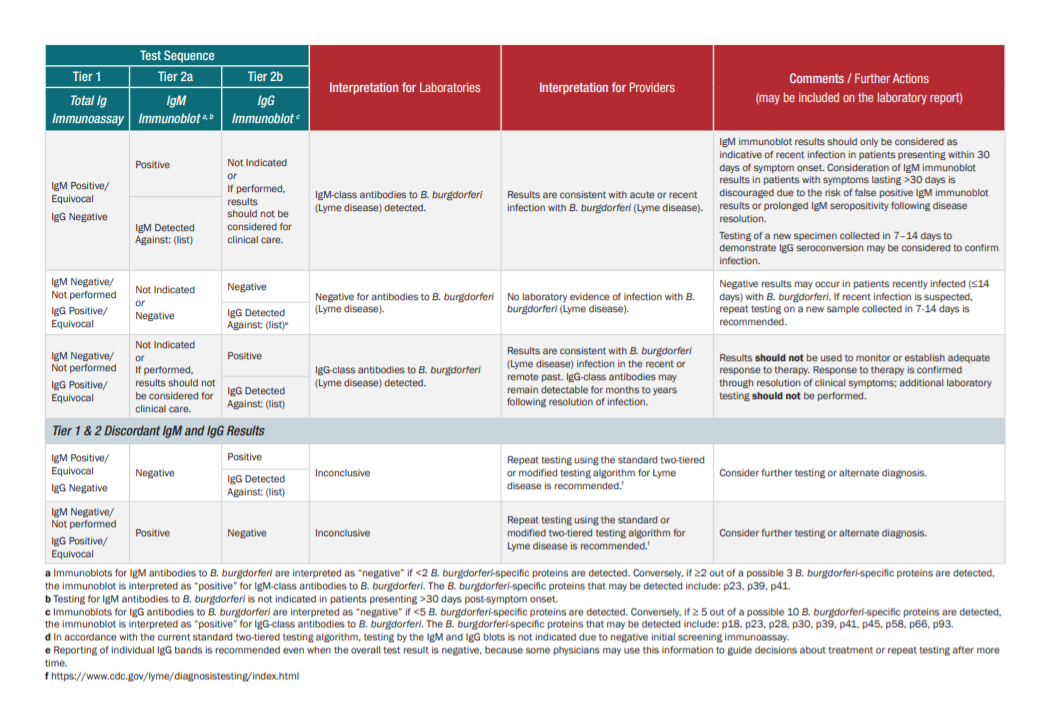 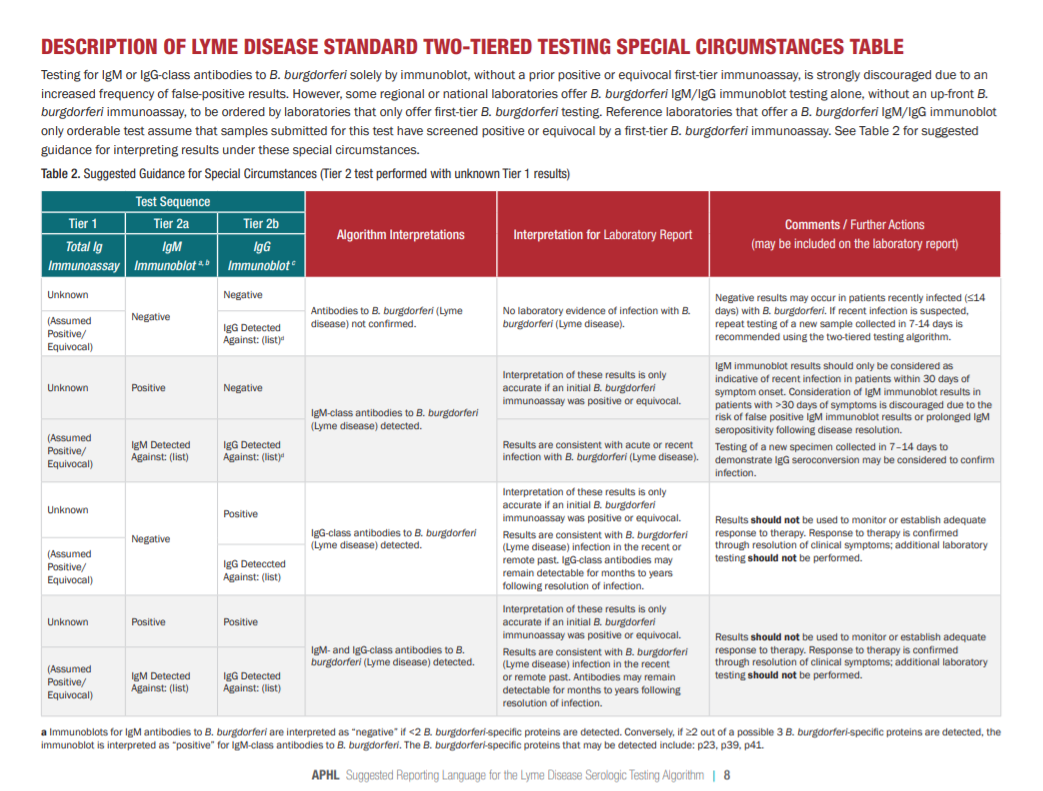 Please see pp 5 – 14 of the PDF for detailed tables on the interpretation of STTT testing.

What Providers Should Know About Lyme Disease Testing
Scenarios for which Lyme disease serologic testing is NOT recommended include:

• Presence of erythema migrans in high incidence areas.
• Absence of likely Ixodes tick exposure (Regions Where Ticks Live | Ticks Home | CDC )
• Lack of travel to, or residence in a Lyme disease endemic area (Lyme Disease Maps: Most Recent Year | Lyme Disease | CDC).
• Following completion of one or more antibiotic course(s) for Lyme disease:
○ Testing should not be used to monitor response to therapy or determine ‘cure.’
• Due to pressure from patient or patient representatives in the absence of clinical criteria supporting risk for Lyme disease infection.

This entry was posted in Infectious Diseases. Bookmark the permalink.