Links To And Excerpts From emDocs.net’s “Multiple Sclerosis in the ED: Pearls & Pitfalls”

Note to my readers: I excerpt from resources that I have reviewed for two reasons: First my blog’s search function helps me locate the resource when I need it, and second, excerpting helps me fix the resource in my memory.

All that follows is from the above outstanding blog post:

A 31-year-old female arrives with a chief complaint of “Cough”. She has recently experienced fits of coughing that are non-productive. She admits to feeling “warm” at home but has not taken her temperature. She’s also had some rhinorrhea and congestion.

The patient has also noted some changes in her vision, which has never happened before. She states that 4 or 5 weeks ago she had symptoms of “pins and needles” in her legs that lasted about a week in duration but denies any traumatic event or changes in activity that could have incited this event. She denies any current paresthesias or gait/coordination disturbances.

Initial VS: BP 114/76, HR 77, T 100.7F Oral, RR 16, and SpO2 100% on room air. The physical exam is normal except for her neuro exam. She has a slight delay in eye adduction upon lateral gaze, bilaterally. However, upon convergence both eyes adduct briskly. Aside from this finding, cranial nerves II-XII appear intact. Reflexes are 2/4 throughout, sensory is intact, and the patient demonstrates no gait abnormalities on ambulation.

Based on what you’ve seen so far, what might be going on?

A 31-year-old female arrives with a chief complaint of “Cough”. She has recently experienced fits of coughing that are non-productive. She admits to feeling “warm” at home but has not taken her temperature. She’s also had some rhinorrhea and congestion.

The patient has also noted some changes in her vision, which has never happened before. She states that 4 or 5 weeks ago she had symptoms of “pins and needles” in her legs that lasted about a week in duration but denies any traumatic event or changes in activity that could have incited this event. She denies any current paresthesias or gait/coordination disturbances.

Initial VS: BP 114/76, HR 77, T 100.7F Oral, RR 16, and SpO2 100% on room air. The physical exam is normal except for her neuro exam. She has a slight delay in eye adduction upon lateral gaze, bilaterally. However, upon convergence both eyes adduct briskly. Aside from this finding, cranial nerves II-XII appear intact. Reflexes are 2/4 throughout, sensory is intact, and the patient demonstrates no gait abnormalities on ambulation.

Based on what you’ve seen so far, what might be going on?

With the above differential diagnosis in mind, when I diagnose internuclear opthalmoplegia I will consider discussing the case with my neuroradiologist prior to requesting neuroimaging.

What is the role of an EM doc when it comes to Multiple Sclerosis?

Management and control of life-threatening complications come first. With an initial non-life-threatening presentation, however, not only will making the diagnosis get patients the resources they need sooner through a neurology referral, but early treatment at time of presentation has been shown to significantly impact progression of the disease, in some instances delaying the recurrence and progression by up to 5 years.1

MS is a demyelinating disorder of the CNS leading to diffuse axonal injury. The pathogenesis of this is somewhat debated, though the predominant theory is T-Cell mediate autoimmune response directed against structural components of the myelin sheath found in the CNS. This patient is presenting with bilateral INO, which is classic in MS patients due to the exceptionally dense myelination, as well as the periventricular location of the MLF.

INO is a disorder of conjugate lateral gaze in which the affected eye, or eyes, show impairment of adduction. When an attempt is made to gaze contralaterally (relative to the affected eye), the affected eye fails to adduct. The contralateral eye will abduct but display nystagmus. Divergence of the eyes will lead to horizontal diplopia or “double vision”. For example, if the right eye is affected the patient will “see double” when looking to the left. Convergence is generally preserved. 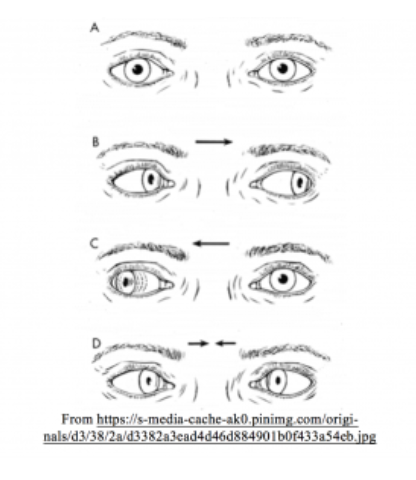 INO is caused by disruption of the MLF, specifically its connection between CN VI nucleus on one side of the pons to the medial rectus subnucleus of CN III in the contralateral midbrain. The MLF connects the vestibular nuclei with the oculomotor, trochlear, and abducens nuclei as well as motor neurons controlling cervical musculature.  Specific to horizontal gaze, excitatory interneurons project contralaterally from the abducens (CN VI) nucleus via the MLF to the opposite oculomotor nucleus, to synapse with motor neurons supplying the medial rectus muscle. The combined effect is to adduct the eye (Figure 2). 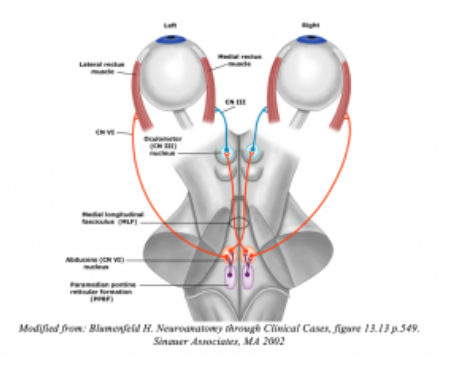 What about the patient’s URI?

Studies suggest that systemic infectious and inflammatory responses often found in URIs and UTIs are a mediating factor for MS flares.4 Patients with MS are known to have defective receptors on T-regulatory cells, which are responsible in preventing antibody production against native host tissues. With these autoimmune safeguards defective, antibodies directed towards myelin are created either incidentally or through T cells autoreactivity, molecular mimicry, or superantigen-driven immune cell activation.5 Hence, it is important to be suspicious of MS in a patient with new neurological complaints in the presence of infection.

Normally, patients initially present with a “Clinically Isolated Syndrome” (CIS) that demonstrates symptoms consistent with demyelinating disease, but which may not meet all the characteristics of a classic MS presentation. The most clinically relevant symptoms often seen in these patients are listed in Table 1.

Approximately 15% of patients presenting with a CIS will never demonstrate a second relapse or further progression, called “Benign MS”. In the rest of the patient population, 85% will ultimately suffer from the Relapsing-and-Remitting (RRMS) type, characterized by clearly defined episodes of neurologic insult, often without residual deficit upon recovery. The majority of RRMS patients will suffer further periodic neurologic flares the rest of their lives. A small subset of patients with RRMS will progress with what’s known as Secondary Progressive MS (SPMS), where there are no relief periods of symptoms remission, and instead the patient experiences a gradual progression of symptoms. SPMS typically occurs 19 years after the patient’s initial CIS. Lastly, 10% of patients will experience a form of MS known as Primary Progressive (PPMS), characterized as progressive disability, with periodic plateaus in symptoms (and rarely very mild and brief states of remission).

PEARL: Patients with PPMS classically exhibit spastic paralysis during their CIS and are often initially diagnosed with transverse myelitis. 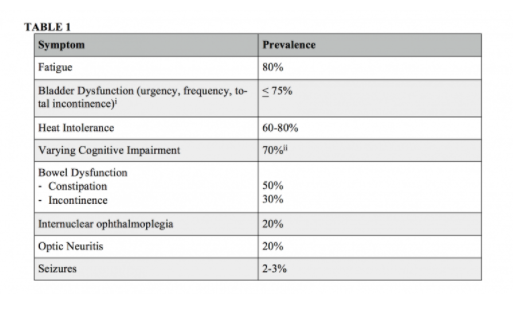 i. One study found that nearly 18% of patients presenting with acute MS flares displayed urine dipstick analysis consistent with UTI.5

Not only are there classic clinical presentations indicative of MS, there are several key patient presentations that allow you to place MS much further down on your differential, specifically: Hearing loss (especially bilateral), presentation of paresthesias in patients less than 10 years of age or greater than 50, serum ESR > 80, CSF protein > 100, and CSF WBC > 50.

McDonald Criteria: These were originally established to aid the clinical diagnosis of MS based on symptom recurrence (dissemination through TIME) and the presence of new symptoms different from those of the CIS (dissemination through SPACE of the CNS). This required observation over the course of years to prove dissemination of the disease through “time” and “space” and delayed the diagnosis. In 2010 a revised version was made, and current guidelines have a respective sensitivity and specificity of 77% and 92%, respectively.6 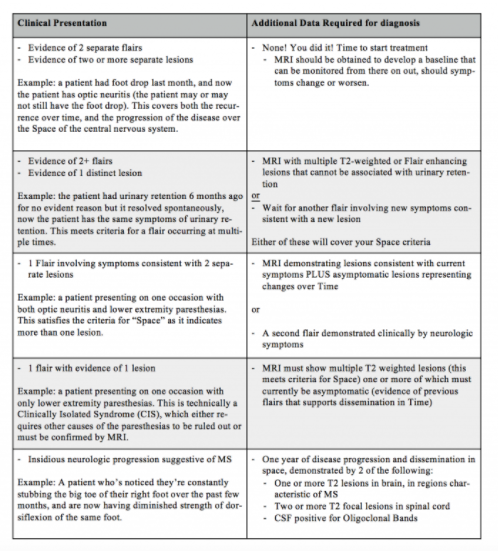 What is the real value of analyzing a patient’s CSF?

The presence of IgG (and less frequently, IgM) and Oligoclonal Bands (OCBs) upon electrophoresis serve as markers of immune activity within the CNS. Immunoglobulins do not readily cross the Blood Brain Barrier (BBB), so an elevated ratio of CSF to serum Ig is a hallmark of MS pathology.  In patients diagnosed with MS, the presence of OCBs is unique to CSF when compared to serum. In these same patients, 70-90% have a significantly elevated CSF:Serum IgG index.7

In CIS, OCBs are found in roughly 60% of patients. However, studies demonstrated that the amount of OCBs in CIS strongly correlates with the number of lesions present on a baseline MRI.8

While this evidence shows that there is some diagnostic utility in an IgG Index, remember that there are many other causes of CNS inflammation, and BBB disruption that can lead to an elevated IgG index, including viral meningitis, PML, lymphoma, neurosyphilis, acute inflammatory polyradiculoneuropathy, and subacute sclerosing panencephalitis. Basically, you should look for OCBs and an elevated IgG Index when an MRI is unavailable only when you can safely rule out other causes of potentially positive results.

Need and application of the MRI

An MRI with and without contrast should be obtained in all patients suspected of having CIS or MS. Patients will need a baseline for follow-up with neurology. That being said, it’s unreasonable to think that all EDs have access to an MRI right away. In these cases, you can perform an LP looking for evidence of OCBs and an elevated Ig Index. If the patient does not have a known diagnosis of MS with focal deficits, admission is warranted.

If you do have access to an MRI here’s what you need to consider: In a T1 image, grey matter will give off a low signal brightness, while white matter will give off brightest signal (and CSF, which is mostly water by comparison, gives off almost no signal). T2 is pretty much an inverse image of this (think of it as the negative) and FLAIR (fluid attenuated inversion recovery) cleverly selects out and discards signal produced by the CSF. With a T2-FLAIR image normal healthy myelinated white matter will look dark grey, while demyelinated regions representative of old flares will look bright white! In contrast, active plaques are best visualized with T1 gadolinium enhancement, because during an active flare the BBB is compromised allowing permeation of the lesion by contrast circulating in the blood. This is a good way to utilize an MRI to meet your Dissemination-in-Time criteria. 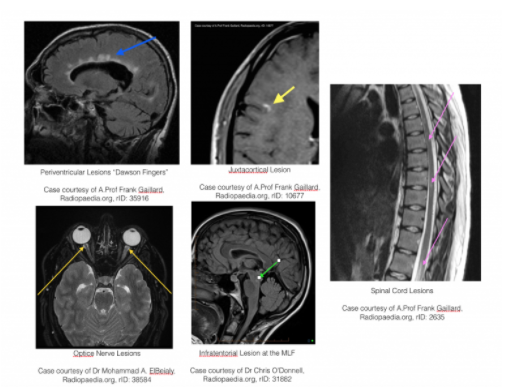 The above images are from Radiopaedia.org, one of the best medical education resources on the internet. Here is a list of resources on Multiple Sclerosis from a search of the topic on Raiopaedia.

Reasons for admission include several considerations. Patients with focal neurologic deficits or for those in who the diagnosis of MS is not confirmed should be admitted. Other reasons for admission include disabling/life-threatening symptoms, patients with pre-existing diabetes (due to the high-dose glucocorticoid treatment, these patients may experience severe hyperglycemia, and will require strict inpatient glucose monitoring with insulin control), patients with severe inciting event such as sepsis, and those unable to obtain follow-up or with poor social situations. Patients may be appropriate for discharge if the diagnosis of MS is confirmed and neurology and primary care follow is ensured within the next several days.

Note to myself: Be sure and review the Resources and Further Reading.

This entry was posted in emDocs, Neurology. Bookmark the permalink.