In this post I link to and excerpt from Episode 85 – Medical Clearance of the Psychiatric Patient. Written Summary and blog post by Anton Helman Aug 2016 with background research by Anton Nikouline.

Psychiatric chief complaints comprise about 6 or 7% of all ED visits, with the numbers of psychiatric patients we see increasing every year. The ED serves as both the lifeline and the gateway to psychiatric care for millions of patients suffering from acute behavioural or psychiatric emergencies. As ED docs, besides assessing the risk of suicide and homicide, one of the most important jobs we have is to determine whether the patient’s psychiatric or behavioral emergency is the result of an organic disease process, as opposed to a psychological one.

There is no standard process for this.

A study out of the Annals of EM showed that The Quick Confusion Scale is as reliable as a full Mini-Mental Status Exam to reveal an altered level of awareness that may help pick up organic pathology:

What month is it?

About what time is it?

Count backward from 20 to 1

Say the months in reverse

The 3 key elements of the mental status exam are orientation, memory and judgement which can often be gleaned from the patient  encounter by an experienced EM provider without a validated scale.

As always, vital signs are vital! Any abnormality in vital signs should be addressed and accounted for.

Hypoglycemia can mimic many psychiatric illnesses from catatonic schizophrenia to severe depression as should be considered as “the 6th vital sign”.

Look for fluctuating level of awareness as it is rare in isolated psychiatric illness, and often signifies delirium and an underlying toxin, metabolic abnormality or CNS lesion.

What follows is from Best Case Ever 48 – Organic vs Psychiatric Illness. Published August 2016 by Anton Helman

Delirium is the acute and fluctuating onset of in-attention, with disorganized thinking, and/or altered level of awareness. Unlike dementia (which progresses slowly) delirium happens acutely. In the elderly, 70% of delirium is initially “hypoactive,” which can delay its detection in the ED.

Delirium is a very serious presentation, which always has an underlying medical cause. Length of stay in hospital, and in-hospital mortality increases twofold in patients diagnosed with delirium, and delirium is not always reversible. Always assess the baseline functional status of elderly patients, and be suspicious of any acute decline. 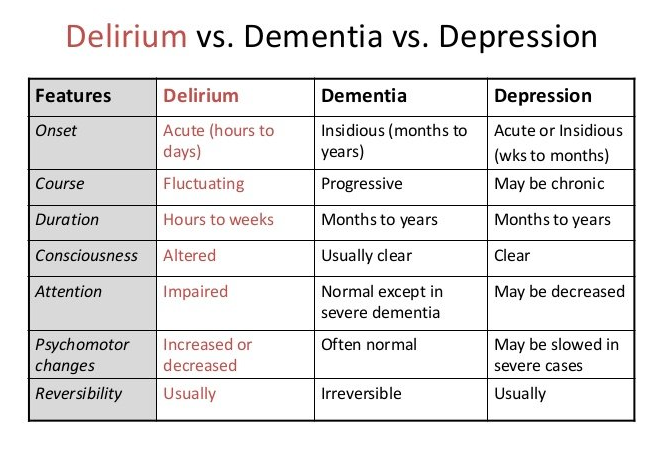 Visual hallucinations can occur in a myriad of organic illnesses and ingestions from LSD to Creutzfeldt-Jakob disease to Delirium Tremens to (my favourite) Anton’s Syndrome.

Resuming excerpts from Episode 85 – Medical Clearance of the Psychiatric Patient. 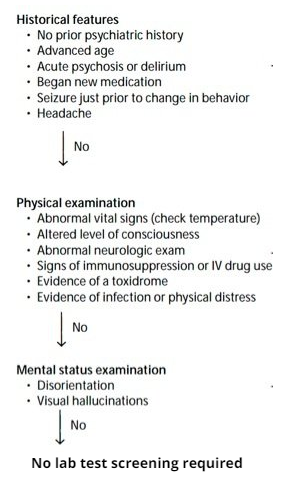 Urine drug screens are not required routinely in the psychiatric patient. Most patients, if asked in a non-accusatory manner, will tell you what drugs they have recently taken. Olshaker found that the reliability of patient self-reported drug use had a sensitivity of 92% and specificity of 91%. The reliability of self-reported alcohol use was 96% sensitive and 87% specific. In addition, urine drug screens have many false positive and negatives which can be misleading.