Note to myself: I found this article difficult to understand.

The above article has been cited by 35 articles in PubMed.

All that follows is from the above article.

Mast cell activation (MCA) accompanies diverse physiologic and pathologic processes and is one of the more frequently encountered conditions in medicine. MCA-related symptoms are usually mild and often transient. In such cases, histamine receptor blockers and other mediator-targeting drugs can usually control MCA. In severe cases, a MCA syndrome (MCAS) may be diagnosed. However, overt MCAS is an unusual condition, and many patients referred because of suspected MCAS are diagnosed with other diseases (autoimmune, neoplastic, infectious) unrelated to MCA or suffer from MCA-related (e.g., allergic) disorders and/or co-morbidities without fulfilling criteria of an overt MCAS. These considerations are important as more and more patients are informed they may have MCA or even MCAS without completing a thorough medical evaluation. In fact, in several instances, symptoms are misinterpreted as MCA/MCAS, and other, clinically relevant conditions are not thoroughly pursued. The number of such referrals is increasing. In order to avoid such unnecessary referrals and to prevent misdiagnoses, we here propose a diagnostic algorithm through which a clinically relevant (systemic) MCA can be suspected and MCAS can subsequently be documented or excluded. In addition, the algorithm proposed should help guide the investigating care providers to consider the two principle diagnoses that may underlie MCAS, namely severe allergy and systemic mastocytosis accompanied by severe MCA. Although validation is required, we anticipate that this algorithm will facilitate the management of patients with suspected MCAS.

MC activation (MCA) can be documented in a number of physiologic and pathologic conditions. Acute MCA is thus encountered in IgE-mediated allergic reactions and in extreme instances may result in systemic anaphylaxis (1–3,5,18–20). Severe or even life-threatening MCA may develop when i) the burden of MC is high, ii) when MC are in a ‘hyper-activated’ state and iii) when comorbidities make the patient less tolerant to MCA events. When MC involvement is documented and the reaction is severe, a MCA syndrome (MCAS) may be diagnosed (21–28). In the past 50 years, clinical symptoms resulting from MCA have primarily been documented in the context of allergic diseases. More recently, however, MCA has also been considered in the context of mast cell neoplasms (21–23,26–28). In order to address its complex etiology, diagnostic criteria for MCAS have been set forth and MCAS variants have been delineated by a consensus group (26–28).

However, some consternation still remains over the diagnosis of MCAS, and many patients are referred because they believe they have MCAS or their doctors judged that the symptoms reported could be indicative of MCA or MCAS. In order to address this challenge our group has worked on a diagnostic algorithm for patients with suspected MCAS. This algorithm is presented here-in, together with associated criteria, assays and tools that will assist in the diagnosis of MCA and MCAS.

Consensus Criteria and Classification of MCAS

When MCA symptoms are severe and recurrent, the diagnosis MCAS must be considered. As per existing consensus criteria (27) the term MCAS applies when i) typical clinical signs of severe recurrent acute systemic MCA are present (especially in the form of clinical features and findings of anaphylaxis), ii) the involvement of MC can be demonstrated by biochemical analyses (preferably through an increase in tryptase following the 20%+2 formula as discussed below) and iii) the symptoms respond to treatment with MC stabilizing agents or drugs targeted against MC mediator production, secretion or receptor binding. All three criteria must be met to establish the diagnosis of MCAS (Table 1). 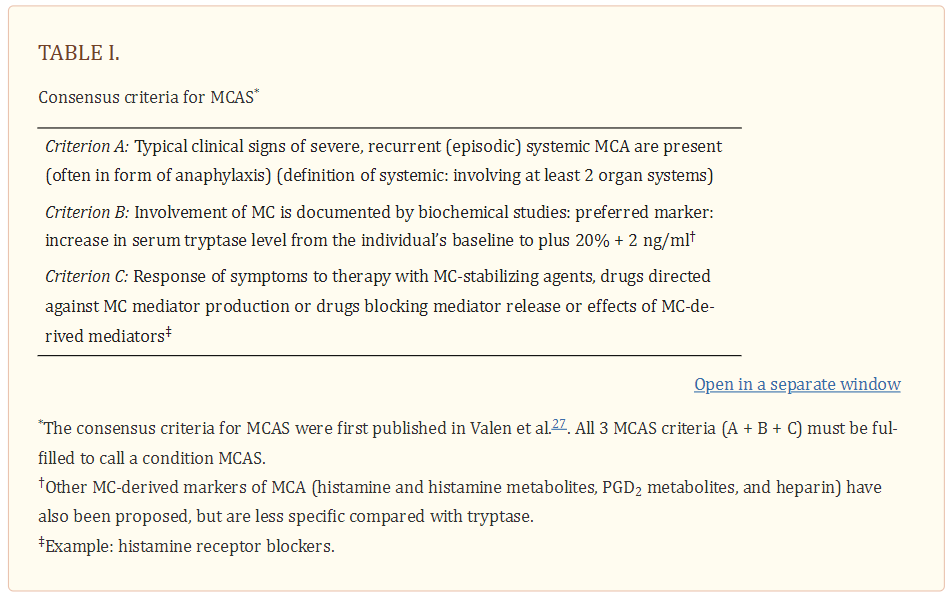 Based on the underlying condition, patients with MCAS should then be further classified into i) primary MCAS where KIT-mutated, clonal (CD25+) MC are detected (with or without an underlying diagnosis of mastocytosis), ii) secondary MCAS where an underlying non-neoplastic disease, usually an IgE-dependent allergy or other hypersensitivity reaction is detected, and iii) idiopathic MCAS, where no KIT-mutated MC and no overt inflammatory disorders (that may explain MCA) are detected, and no trigger for a hypersensitivity reaction is found (Table 2) (27,28). 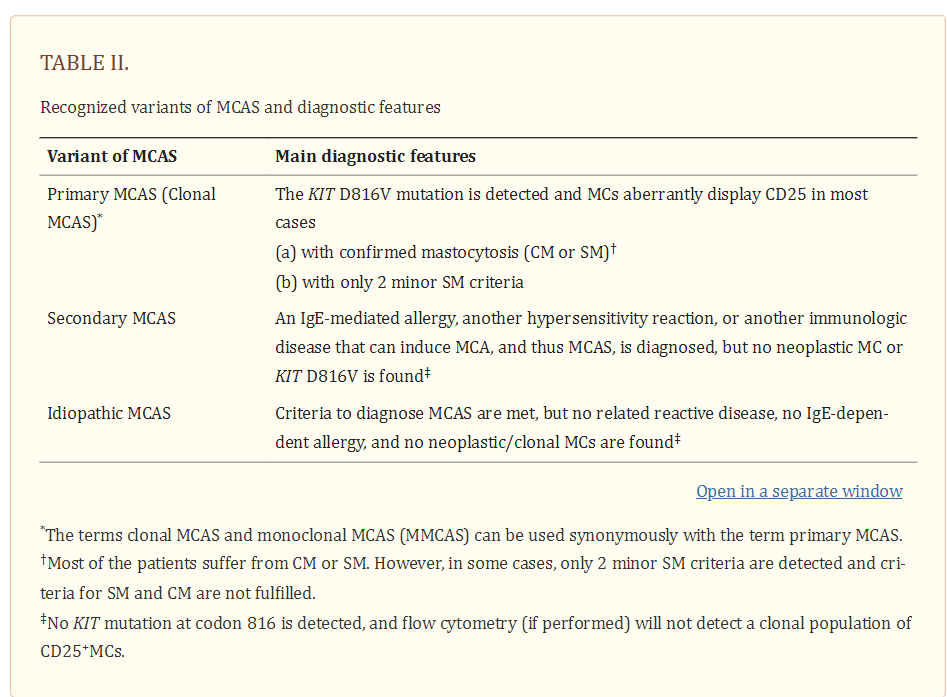 Symptoms of MCA are among the most frequently recorded and treated symptoms in the daily practice of applied medicine. MCA-related symptoms range from mild to severe, and may at times be life-threatening, especially in patients with mastocytosis and concomitant allergy. MCA symptoms are caused by several different vasoactive and pro-inflammatory mediators released from MC when these cells are activated by an allergen via IgER cross-linking or other mechanisms (1–5,29–31). As a result, the severity of MCA correlates with the extent of mediator release from MC during an anaphylactic reaction. Well-recognized symptoms of systemic MCA include, among others, acute urticaria, flushing, abdominal cramping, diarrhea, hypotensive syncope or near syncope and tachycardia (Table 3) (1–3,26–28,31). 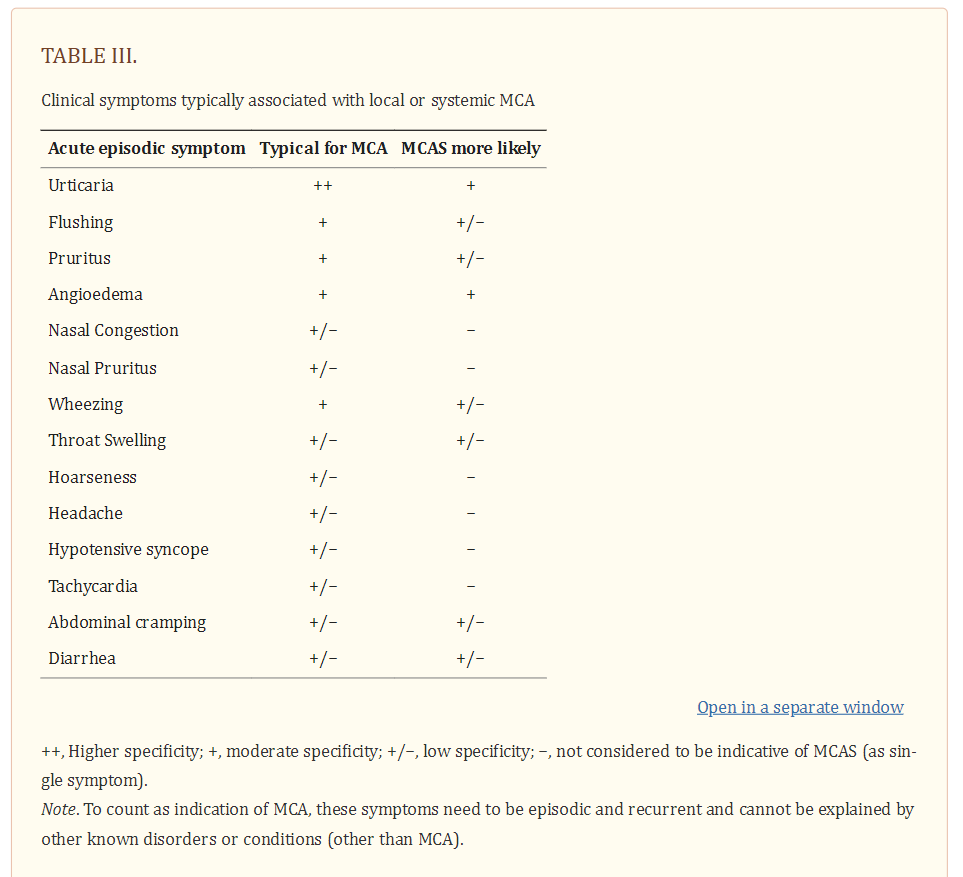 Although none of these symptoms are completely specific for MCA, one or more are typically detected in these patients. The likelihood of MCA increases when two or more of such symptoms are documented, and the likelihood is even higher when the symptoms respond to agents blocking mediator effects, mediator production or mediator secretion. Indeed, the response to such drugs is helpful in practice and is therefore a criterion of MCAS (26–28). Another important aspect is that several different mediators may be involved in MCA-related symptomatology (1–6,26–31) (Table 4). 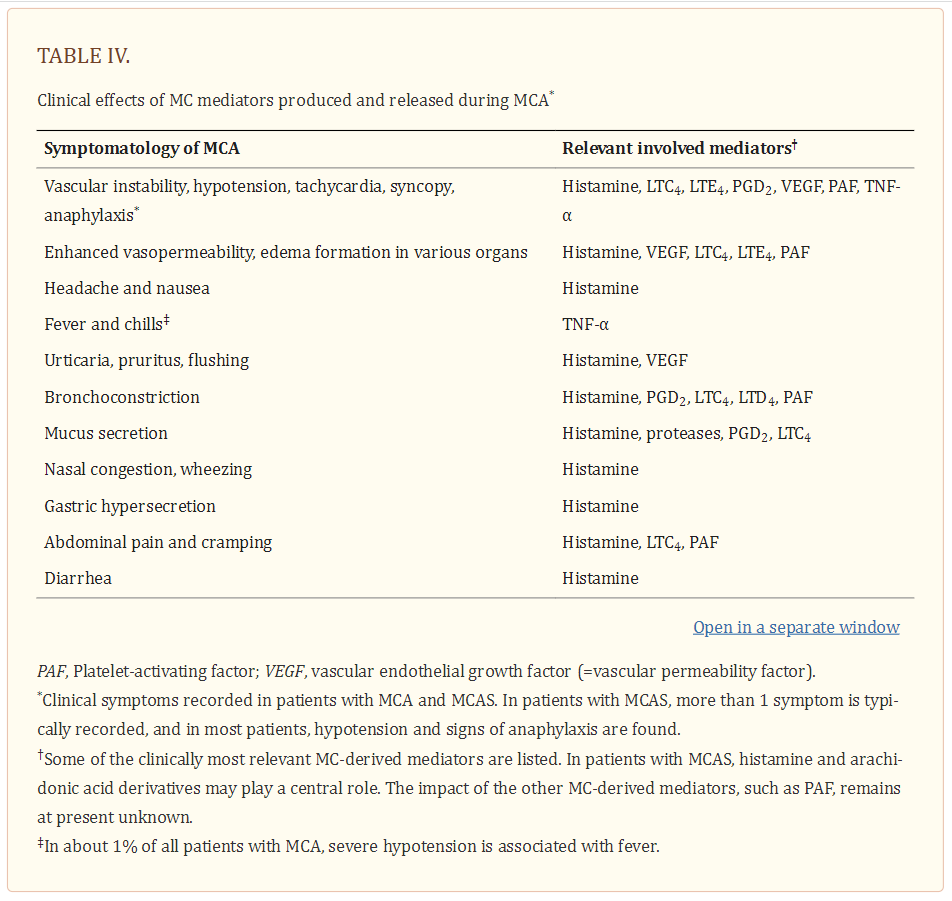 In fact, depending on the organ and pathology involved, certain MC products may act as critical inducers of MCA, and sometimes treatment may need adjustment because of the effects of such mediators. Likewise, vascular instability may not only be triggered by histamine but also by prostaglandins (PG) and/or leukotrienes (LT) derived from activated MC in the same patient, so that the reaction can only be managed when administering histamine receptor (HR) blockers and PG/LT synthesis inhibitors and/or receptor blockers (32). Other potentially relevant mediators associated with activation of MC are platelet activating factor (PAF), tryptases and various cytokines (20,31,33–36) (Table 4) [Above].

MCA may also develop with chronic and/or a less severe symptomatology (Table 5). 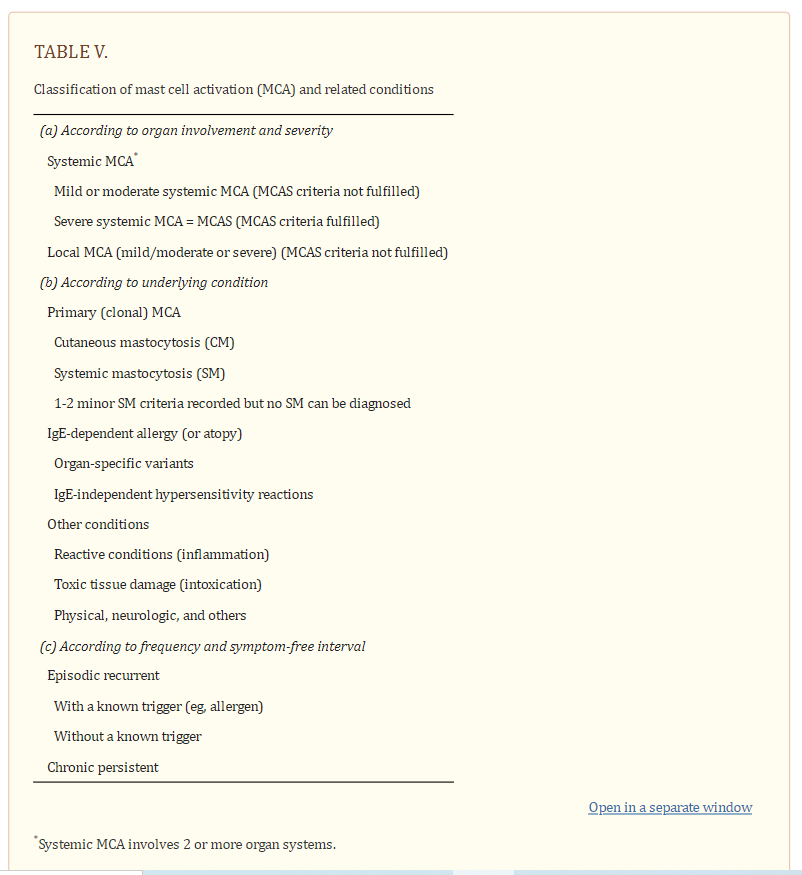 In such patients, the symptoms are often less specific and include headache, nausea and non-specific gastrointestinal complaints (31). It is important to state that these symptoms alone are not regarded criteria of severe systemic MCA or MCAS. Nevertheless such symptoms may possibly relate to local MCA, and thus the administration of anti-mediator-type drugs or MC-stabilizing agents may be considered. However, it is of utmost importance to be aware that there are a number of diseases and conditions in the differential diagnoses that must be taken into account in such cases, including psychiatric, cardiovascular, infectious, endocrinologic, gastrointestinal, toxic, and oncologic disorders. In some patients no definitive organic diagnosis will be made during the initial evaluation and follow-up will be necessary to watch for the evolution of a diagnosable disorder. 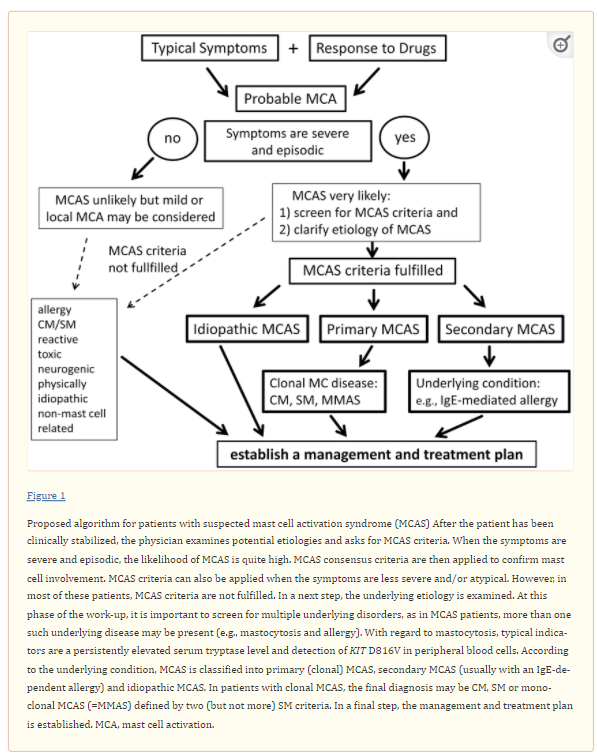 MCA is associated with the release of preformed and newly generated mediators and their effects on target cells (26–28,31). In severe systemic reactions, increased levels of MC-derived mediators should be measurable in biological fluids. Some mediators, like tryptase, are more specific than others for MC and thereby considered as the most precise parameters for the demonstration and documentation of MCA (27,28,37–40). However, the sensitivity of the tryptase algorithm decreases with decreasing clinical severity and with delayed blood draws after resolution of clinical symptoms.

Other mediators, potentially more sensitive than tryptase, are less specific because they are also synthesized and released by other cell types. For example, histamine is produced, stored and released not only by MC but also by blood basophils (which contain amounts comparable to those in MC) and histamine-secreting carcinoid tumors. By contrast, MC contain more than 100-fold higher levels of tryptase than basophils (41,42). Even immature (leukemic) basophils express relatively low amounts of tryptase (43). Therefore, in a routine evaluation, a rapid substantial increase in serum tryptase levels above the individual’s baseline is considered specific for MC involvement and MCA, and thus can be employed as a MCAS criterion. In the following paragraph, a practical guide for the measurement of tryptase in the MCA/MCAS-context is provided:

First, MC involvement should be confirmed by measuring an event-related, transient, increase in serum tryptase. This ‘event-related’ increase in tryptase is best captured in a 1-4 hour post-event interval during which tryptase remains elevated, and the resulting enzyme level must then be compared to the individual’s baseline tryptase. If no previous baseline level is available, the baseline level must be assessed at least 24-48 hours after complete resolution of all signs and symptoms (27,37–39). 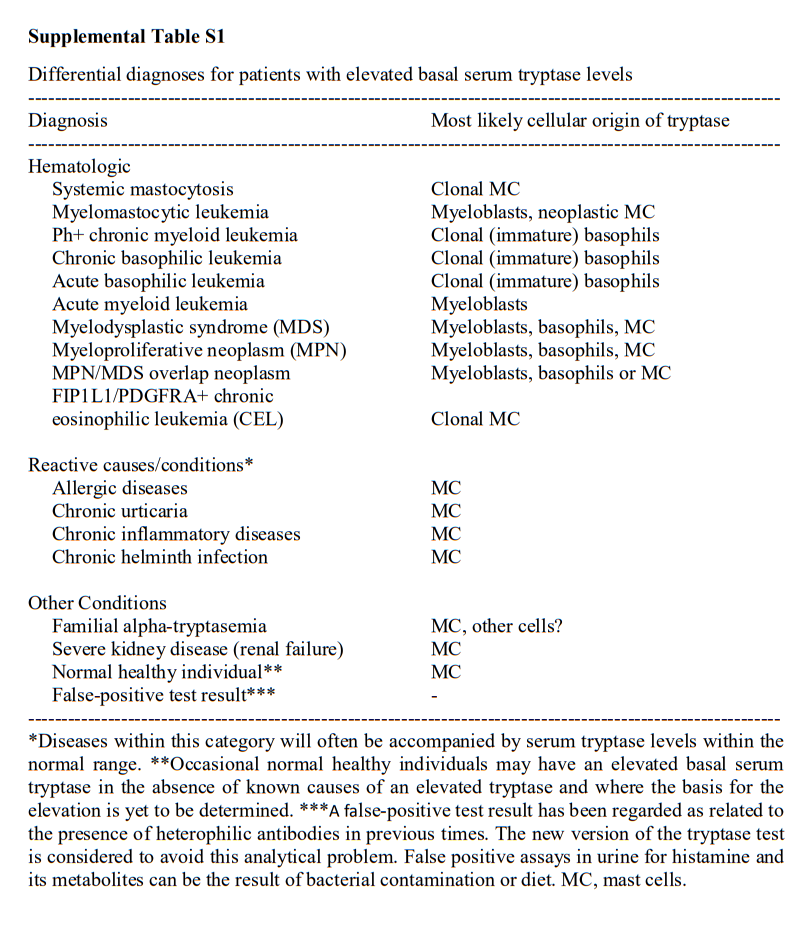 Additional mediators, when rising from baseline, may also serve as markers of MCA or even MCAS. These include, among others, histamine (plasma, urine), histamine metabolites (urine) and the 24-hour urine PGD2 metabolite, 11β-prostaglandin F2α or the LTC4 metabolite, LTE4, level (urine) (27,31,32,45–50). However, as noted, these mediators are less specific for MCA compared to tryptase. Moreover, no data are available to establish what minimal increase of these mediators would count as a reliable indicator (and thus criterion) of systemic MCA.

Differential Diagnoses to MCA and MCAS

A number of differential diagnoses have to be taken into account in patients with suspected MCAS (26–28) (Supplemental Table S1).

MCAS is a well-defined condition that occurs primarily in patients with IgE-dependent allergies and/or mastocytosis, but may also occur in a number of other conditions. In few cases, no underlying cause or disease will be found, leading to the diagnosis ‘idiopathic MCAS’. Diagnostic MCAS criteria include typical clinical symptoms, often with hypotension, an event-related, substantial increase in serum tryptase levels and response of clinical symptoms to MC-stabilizing drugs or drugs counteracting the effects of MC-derived mediators. When patients with suspected MCAS are referred, it is helpful to follow a diagnostic algorithm that is able to help differentiate between true MCAS, other MCA-related disorders, and unrelated conditions where MC are not involved. A key diagnostic checkpoint is vascular instability (hypotension) combined with other typical signs of MCA, which is almost always seen in MCAS. In a next step, serum tryptase levels are measured. When the event-related increase in tryptase, compared to symptom-free intervals, exceeds a certain threshold (20% from baseline plus 2 ng/ml) the diagnosis MCAS is quite likely. It is also standard to measure other MC-related parameters such as urinary histamine- and/or PGD2 metabolites. However, a selective increase of these mediators (in the absence of an increase in tryptase) may be found associated with chronic MCA or a less severe form of MCA but not with MCAS. In a next step, the response of the symptoms to MC-stabilizing and/or anti-mediator-type drugs confirms the presence of MCAS. In a final step, the patient is examined for the presence of underlying disorders, such as mastocytosis and IgE-dependent allergy. In this final phase, the MCAS is classified into primary MCAS, secondary MCAS and idiopathic MCAS. The algorithm provided in the current article is designed to assist in the evaluation and management of patients with suspected MCA and MCAS. In addition, our proposed algorithm should support the preparation and conduct of clinical studies on MCAS.

This entry was posted in Allergy and Immunology. Bookmark the permalink.