Links To And Excerpts From “Transcranial Doppler in Autonomic Testing: Standards and clinical applications”

After carefully reading the article below, I don’t believe it is worth reviewing by most clinicians.

When cerebral blood flow falls below a critical limit, syncope occurs and if prolonged ischemia leads to neuronal death. The cerebral circulation has its own complex finely tuned autoregulatory mechanisms to ensure blood supply to the brain can meet the high metabolic demands of the underlying neuronal tissue. This involves the interplay between myogenic and metabolic mechanisms, input from noradrenergic and cholinergic neurons, and the release of vasoactive substrates including adenosine from astrocytes and nitric oxide from the endothelium. The transcranial Doppler (TCD) is a non-invasive technique that provides real-time measurements of cerebral blood flow velocity. TCD can be very useful in the work up of a patient with recurrent syncope. Cerebral autoregulatory mechanisms help defend the brain against hypoperfusion when perfusion pressure falls on standing. Syncope occurs when hypotension is severe and susceptibility increases with hyperventilation, hypocapnia and cerebral vasoconstriction. We review clinical standards for the acquisition and analysis of TCD signals in the autonomic laboratory and the multiple methods available to assess cerebral autoregulation. We also describe the control of cerebral blood flow in autonomic disorders and functional syndromes.

The inbuilt capacity of the cerebral circulation to regulate its own flow to remain constant in the face of changes in perfusion pressure is known as cerebrovascular autoregulation.

The CBF autoregulation involves integrative interactions between brain tissue metabolism, systemic blood pressure, arterial blood gases, as well as neurogenic input from the central autonomic network. This interplay occurs at the level of the arterioles in the cerebrovasculature and at the neurovascular unit, and over multiple time scales from seconds to hours [40].

The failure of cerebral autoregulation can occur at any age. The elderly population, in particular those with autonomic or cardiovascular disorders, are at a greater risk for dementia, stroke, long-term disability and death [13, 15, 69].

We focus on the transcranial Doppler (TCD) as a non-invasive method to evaluate cerebral hemodynamics and its usefulness in the outpatient autonomic clinic.

International consensus guidelines exist to standardize TCD measures for best clinical practice [13], and should enable us to internationally standardize methodological approaches and together validate the tools necessary to assess cerebral autoregulation in the autonomic laboratory.

The mechanisms involved in this process are illustrated in Figure 1. 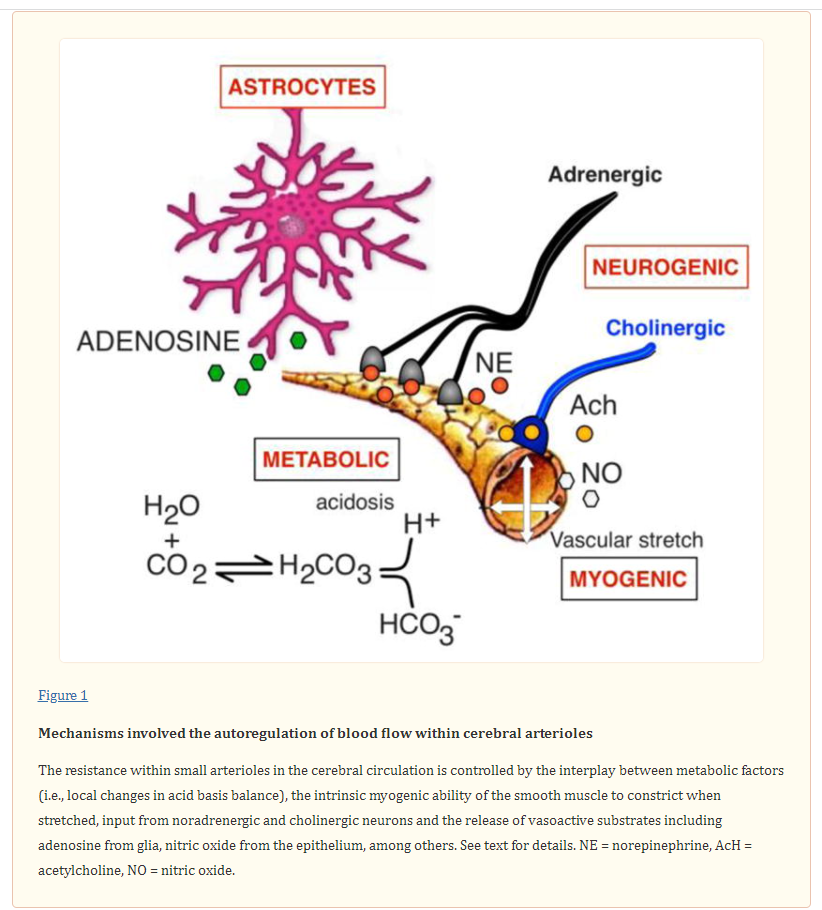 Small vessels in the cerebral circulation respond less sensitively to hypoxia, particularly when chronic, as in patients with lung disease or congestive heart failure [61]. The changes in brain metabolism in responses to an increase in neuronal activity trigger the release of vasoactive compounds such as arachidonic acid, lactate, adenosine and nitric oxide within the neurovascular unit to address the increased energy demands. Glial cells, neurons and the vascular endothelium within the neurovascular unit can also re-direct local blood flow [20]. Astrocytes regulate the release adenosine and can elicit vasoconstriction (through changes in intracellular calcium concentration) or vasodilation of arterioles [27]. Similarly, an increase in glucose results in an increase in blood flow and oxygen supply. The cerebral arterioles are dually innervated by both parasympathetic and sympathetic fibers [32, 42], which are thought to play a role in buffering changes in perfusion. Activation of the sympathetic nerves presumably increases cerebrovascular tone, although there is uncertainty as to when these nerves are activated [26].

The assessment of cerebrovascular autoregulation evaluates how well the cerebral vessels respond to changes in arterial blood pressure to regulate blood supply constant. These changes can be evaluated by physical maneuvers that reduce venous return to the heart and lower perfusion pressure within the cerebral circulation (e.g., orthostatic stress or Valsalva straining). These challenges require an effective cerebral autoregulatory response to prevent cerebral blood flow from falling below critical limits [74]. Age and gender may also influence cerebral autoregulatory responses [10, 21].

Static autoregulation refers to the ability of the cerebral circulation to maintain a constant flow overtime in response to changes in blood pressure (BP). The evaluation of static autoregulation requires measurements of cerebral blood flow velocity (CBFv) and blood pressure under steady-state conditions. Typically, measurements are first obtained in the supine position to establish a baseline. BP is then manipulated, usually by infusion of systemically active vasoconstrictors (phenylephrine) and/or vasodilators (sodium nitroprusside) that increase or decrease BP. Once pressure is held constant and a different level, other steady state measurements are acquired over several minutes [75, 88]. If during the changes in blood pressure, CBF is maintained near to baseline levels, cerebral autoregulation is assumed to be intact [82].

2. Transient increases or decreases in blood pressure induced pharmacological by systemically active pressor agents or vasodilators that do not cross the blood brain barrier (e.g., intravenous administration of noradrenaline or sodium
nitroprusside).

The feasibility of these techniques depends upon the expertise of the local laboratory, available experimental facilities, subject mobility and clinical risk. While lower body negative pressure has the advantage of providing a physiological rather than
pharmacological hemodynamic stress, the application of suction below the level of the iliaccrest may trigger other responses like hyperventilation [65]. The topic of dynamic cerebral autoregulation is covered in detail in the recent white paper [13] and the concepts covered extensively in excellent review articles [14]

TCD ultrasonography provides real-time measurements of blood flow velocity in cerebral vessels. The technique can be used to measure changes in velocity within the large diameter arteries. Sonographers usually aim for the middle cerebral artery (MCA), which is easy to locate at depths around 50–56 mm. The MCA arises from the internal carotid artery and supplies the cerebral cortex and anterior temporal lobes with oxygenated blood.

The Doppler probe has two piezotransducers, one to transmit a pulsed ultrasound beam and a second to receive back the scattered echoes from the moving red blood cells (Figure 2). 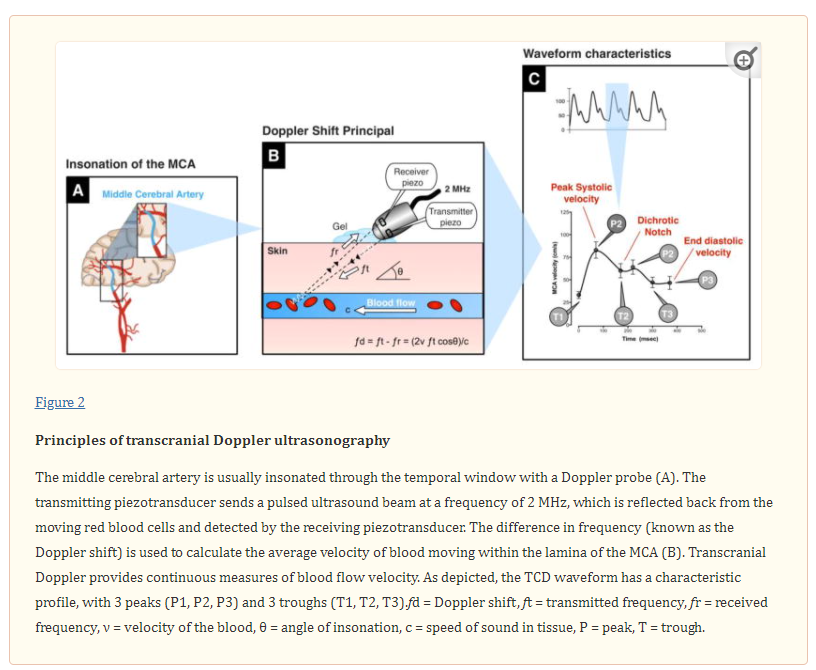 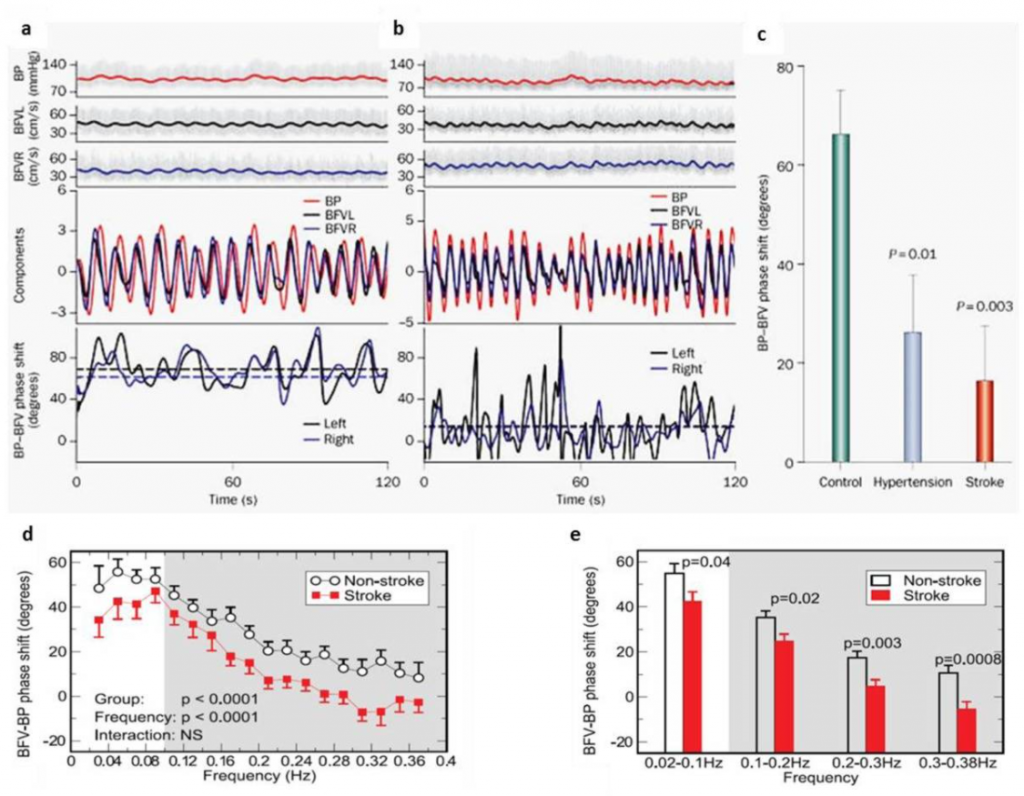 3. CLINICAL APPLICATIONS OF TCD IN THE AUTONOMIC CLINIC

Over one million patients are evaluated for syncope in the US each year. This accounts for around 1% of emergency visits [94]. TCD measurements can be very useful in the clinical work up of a patient with recurrent transient loss of consciousness. Symptoms of cerebral perfusion usually occur when blood flow velocity is reduced by 50% [31]. In cases of pseudo/psychogenic syncope there is unresponsiveness with no change in cerebral flow velocity [66]. Panic, hyperventilation and presyncope produce hypocapnia and strong constriction of the cerebral vessels [65, 70]. These are normal physiological responses to stress and are reversible by CO2 re-breathing [70]. However, orthostatic intolerance symptoms may persist despite improvement in blood flow velocity. There is substantial evidence supporting the usefulness of physical counter maneuvers that increase venous return as a technique to abort and impending vasovagal episode [49, 50, 97]. These maneuvers have been shown to increase cerebral blood flow velocity [34].

Syncope is defined as global cerebral hypoperfusion that results in transient loss of consciousness characterized by rapid onset, short duration, and spontaneous complete recovery [85]. Syncope occurs when cerebral blood flow falls below a critical limit and consciousness can no longer be maintained [11]. Rapid loss of postural tone physically restores blood supply back to the brain, most likely due to a hardwired protective mechanism [7].

The overall goal of clinical autonomic testing is to determine whether orthostatic symptoms are a result of an autonomic abnormality and whether the autonomic nerves are transiently switched off [95], not properly activated [44] or functionally impaired [29, 45].

TCD studies in disorders of orthostatic intolerance and syncope have used different methods to assess cerebral autoregulation and the results are heterogeneous.

Previous reviews have covered early work describing TCD findings in the evaluation of syncope [75]. Table 1 provides a description of key studies examining the TCD in syncope. It was not intended to be an exhaustive literature review, but to provide an update and summarize the more recent relevant studies. 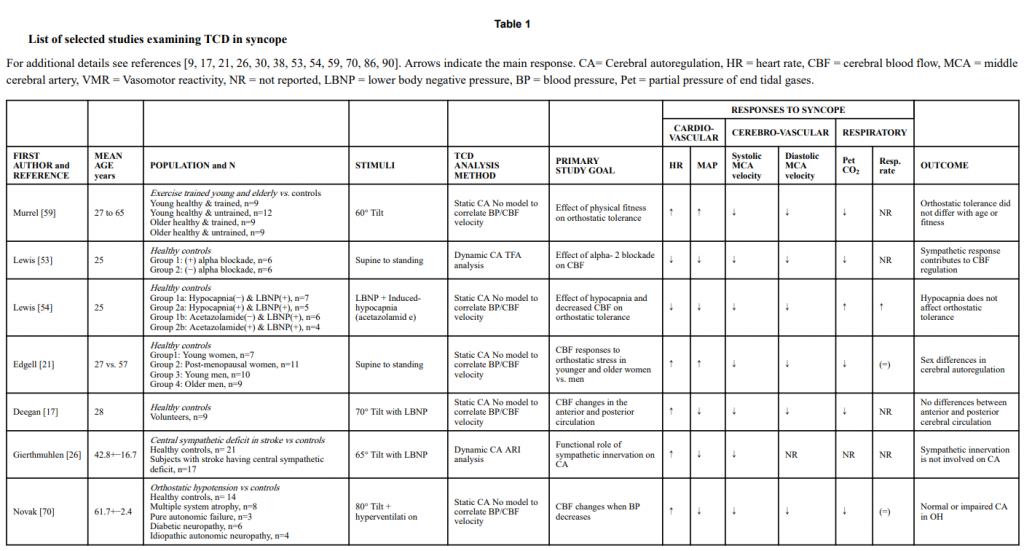 Vasovagal syncope (also known as neurally mediated or reflex syncope) is the most common cause of transient loss of consciousness. It is characterized by the sudden withdrawal of sympathetic activity to the systemic circulation accompanied by an increase in parasympathetic activity and slowing of the heart [84]. Emotional factors play a significant role in many vasovagal episodes [93] and hyperventilation-induced hypocapnia is common prior to loss of consciousness. A reduction in CBFv usually occurs before the fall in BP, as a physiological consequence of the hyperventilation-induced hypocapnia that occurs in habitual fainters. 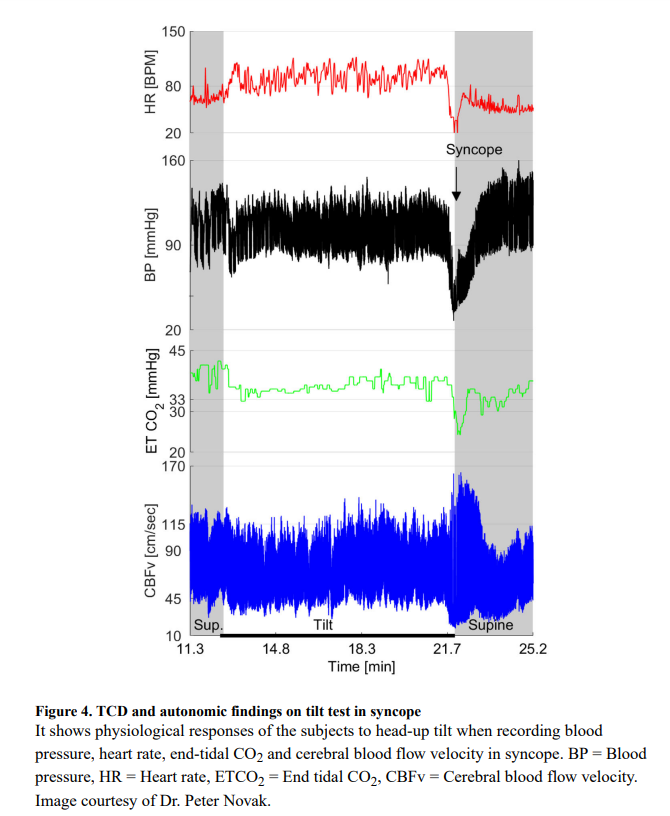 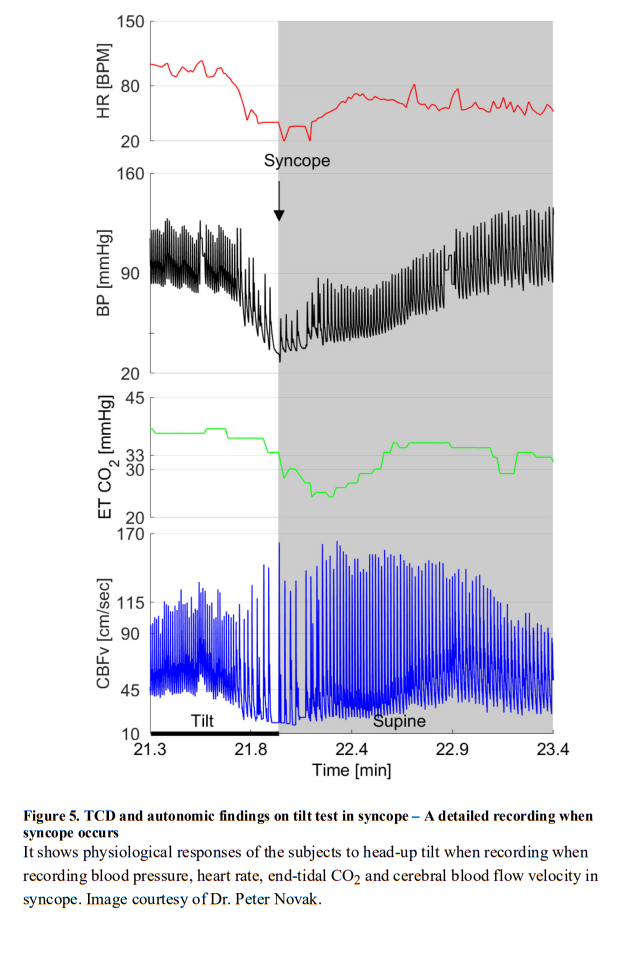 Postural Tachycardia Syndrome (PoTS) is a common disorder encountered in the autonomic clinic that affects children, young and middle age adults, and is more prevalent in women. It is defined as orthostatic symptoms including light-headedness, generalized weakness and palpitations accompanied by a sustained increase in heart rate of >40 bpm in a child (or >30 bpm an adult) within 10 minutes upright [24]. There are usually multiple mechanisms involved (including drugs that increase heart rate, anemia, hypovolemia, hyperadrenergic states, peripheral neuropathies) and comorbid disorders are frequent (e.g., psychiatric somatic sensory disorders [78], anxiety, fibromyalgia, chronic headache, etc. [4]). Children and young adults with PoTS appear to have intact cerebral autoregulation [23]. Symptoms on standing can be triggered when cardiovascular responses are normal and cerebral vasodilatation is intact [67]. A recent study in patients with orthostatic intolerance of mixed causes suggested that simultaneous measurements of TCD and near-infrared spectroscopy maybe of additional use to monitor cerebral hypoperfusion and correlate symptoms [51].

The key studies to define cerebral autoregulation in patients with chronic autonomic failure were performed almost 2-decades ago [8, 38, 69]. Overall, the findings show preserved autoregulatory capacity. Regression analysis shows that in order to withstand periods of low blood pressure standing, most patients with chronic autonomic failure have intact static autoregulation or an expanded autoregulatory range [69]. Others show marked cerebral vasodilatation on standing and syncope occurring when this adaptation is overridden by orthostatic dyspnea and ensuing hypocapnia [8]. Once blood pressure is passively restored in the supine position, most patients with autonomic failure show a dynamic overshoot in cerebral blood flow velocity (i.e., a hyperemic response) suggesting intact vasodilatation in response to hypotension [38]. A small minority with synucleinopathies or diabetes may have autoregulatory failure, which impairs their tolerance to standing [69]. A study of dynamic autoregulation showed that in some patients with multiple system atrophy, cerebral blood flow velocity may be slow to return to baseline after standing [99]. However, none of these studies took into account if the patient had underlying vascular disease, supine hypertension, or was being treated with fludrocortisone or other vasoactive agents. A recent large study in patients with Parkinson disease showed normal cerebrovascular responses to hypocapnia, suggesting that metabolic autoregulation was intact [33]. TCD and autonomic findings in recent studies of patients with synucleinopathies have mixed results and are described in table 2. 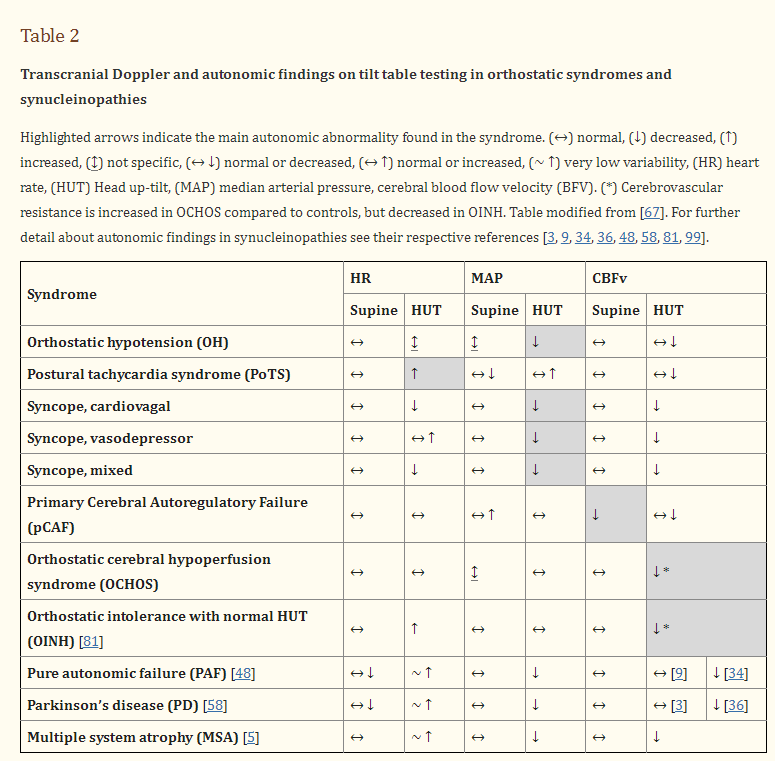