Google+ Links To Laryngospasm After Ketamine From Resus.me and Two Other Resources | Tom Wade MD

Links To Laryngospasm After Ketamine From Resus.me and Two Other Resources

This post is just so I can have a several articles on laryngospasm quickly available for my review.

The following are excerpts from Reference (1):

I’ve been using ketamine regularly for prehospital analgesia and emergency department procedural sedation in both adults and kids for more than a decade. I’ve seen significant laryngospasm 5 times (twice in kids). On one of those occasions, a 3 year old child desaturated to around 50% twice during two episodes of laryngospasm. We weren’t slow to pick it up – that was just her showing us how quickly kids can desaturate which continued while we went through a stepwise approach until BMV resolved it. It was however an eye opener for the registrar (senior resident) assisting me, who became extremely respectful of ketamine after that. Our ED sedation policy (that I wrote) required that suxamethonium was ready and available and that an appropriate dose had been calculated before anyone got ketamine. Paralysis may extremely rarely be required, but when it’s needed you need to be ready. 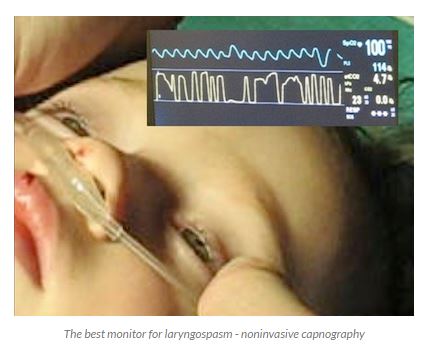 In the child without vascular access, I considered intraosseous and intralingual sux. However, intramuscular suxamethonium is likely to have a relaxant effect on the laryngeal muscles within 30-45 seconds, which has to be compared with time taken to insert and confirm intraosseous needle placement. I do not think the traditionally recommended intralingual injection has any role to play in modern airway management. 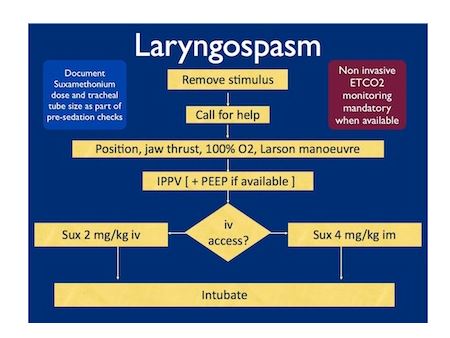 [Sux above refers to suxamethonium]

The following is from Reference (2):

PERIOPERATIVE  laryngospasm is an anesthetic emergency that is still responsible for significant morbidity and mortality in pediatric patients.1 It is a relatively frequent complication that occurs with varying frequency dependent on multiple factors.2 – 5 Once the diagnosis has been made, the main goals are identifying and removing the offending stimulus, applying airway maneuvers to open the airway, and administering anesthetic agents if the obstruction is not relieved. The purpose of this case scenario is to highlight key points essential for the prevention, diagnosis, and treatment of laryngospasm occurring during anesthesia.

Upper respiratory tract infection (URI) is associated with a twofold to fivefold increase in the risk of laryngospasm.5,9 Anesthesiologists in charge of pediatric patients should be aware that the risks associated with a URI in an infant are magnified in this age group, especially in those with respiratory syncytial virus infection.10

Insufficient depth of anesthesia is one of the major causes of laryngospasm. Any stimulation in the area supplied by the superior laryngeal nerve, during a light plane of anesthesia, may produce laryngospasm. Common triggers of reflex laryngeal response during anesthesia are secretions, blood, insertion of an oropharyngeal airway suction catheter, and laryngoscopy. Inexperience of the anesthetist is also associated with an increased incidence of laryngospasm and perioperative respiratory adverse events.2,5,18

The diagnosis of laryngospasm depends on the clinical judgment of the anesthesiologist. Laryngospasm is usually defined as partial or complete airway obstruction associated with increasing abdominal and chest wall efforts to breathe against a closed glottis.3,5,7 In both partial and complete laryngospasm, signs of varying degrees of airway obstruction, such as suprasternal retraction, supraclavicular retractions, tracheal tug, paradoxical chest, and abdominal movements may be seen.3 In addition, inspiratory stridor may be heard in partial laryngospasm but is absent in complete spasm. In addition, in complete laryngospasm, there is no air movement, no breath sounds, absence of movement of the reservoir bag, and flat capnogram.3 Finally, late clinical signs occur if the obstruction is not relieved including oxygen desaturation, bradycardia, and cyanosis.3

Laryngospasm from Life In The Fast Lane