This post covers the ten lung ultrasound signs that you need to master to diagnose the causes of acute respiratory failure with lung point of care ultrasound. This post is taken from the article below.

All of the following is from the above article:

These applications require the mastery of 10 [ultrasound] signs indicating:

These signs have been assessed in adults, with diagnostic accuracies ranging from 90% to 100%, allowing consideration of ultrasound as a reasonable bedside gold standard.

In the BLUE-protocol, profiles have been designed for the main diseases with an accuracy of 90%:

These applications can be done using simple gray scale machines and one microconvex probe suitable for the whole body. Lung ultrasound is a multifaceted tool also useful for decreasing radiation doses (of interest in neonates where the lung signatures are similar to those in adults), from ARDS to trauma management, and from ICUs to points of care.

If done in suitable centers, training is the least of the limitations for making use of this kind of visual medicine.

. . . the first of seven principles: The simplest equipment is suitable for lung imaging.

The second principle is to use gravity rules (gas toward the sky, fluids toward the earth) to locate disorders.

The third principle is to define standardized thoracic points, called BLUE-points, to allow for reproducible analyses.( Fig 1 ) [Fig 1 and the legend below it is crucial to using the BLUE and FALLS protocol. The same is true of the PLAPS YouTube video that follows Fig 1]

The Tools Used for the BLUE – Protocol: 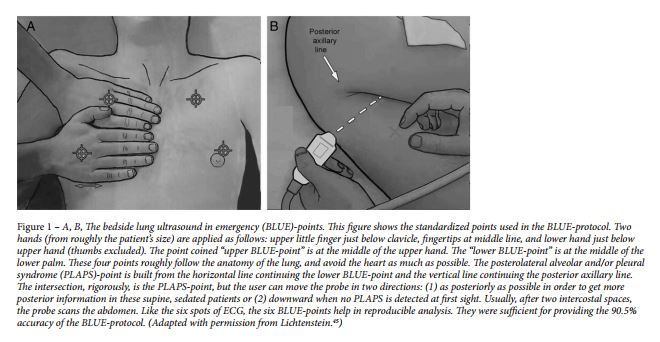 “To scan the posterior chest you really just went to get around as back as far as you can and as low as you can. Now officially it is called the PLAPS point. The PLAPS Point has been likened to the Morrison’s pouch of the lung.”

and the fourth is to precisely define the pleural line, the first of 10 basic signatures 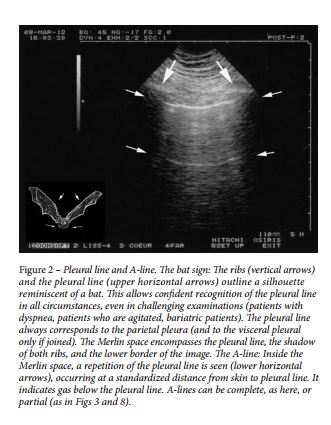 The sixth principle analyzes lung sliding, which is a twinkling visible at the pleural line that spreads homogeneously below it (generating the seashore sign in M-mode). Lung sliding and A-lines define a normal lung surface 46 ( Fig 2 [above],                   Fig 3 [below]). 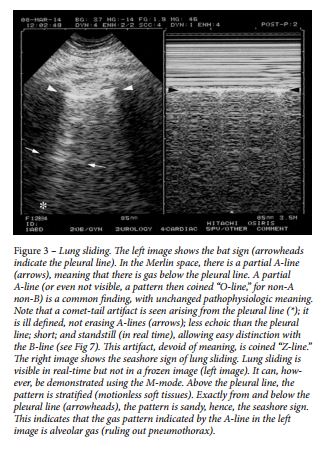 The seventh principle is based on the fact that all acute, life-threatening disorders are superficial. This allows [us] to standardize the field ( Table 1 ). 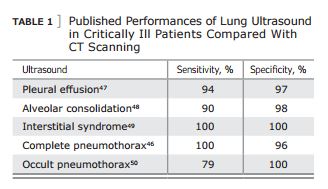 Diagnosis of pleural effusion is an old application of lung ultrasound 51,52 and basically yields two standard signs: the quad sign and the sinusoid sign ( Figs 4, 5 ). 47 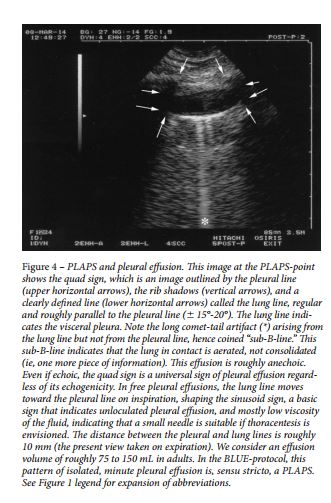 Below is an another example of the quad sign along with the sinusoid sign [This figure is from Ref (2) as the fig 5 in Ref 1 is actually of the shred sign.] 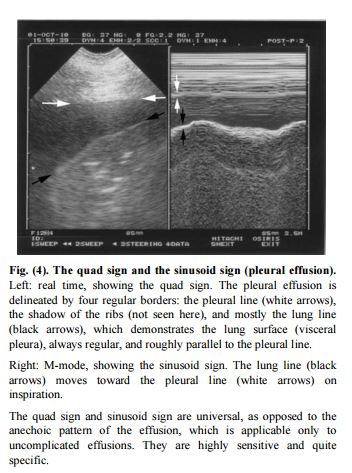 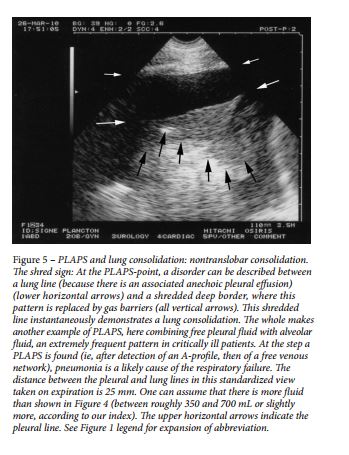 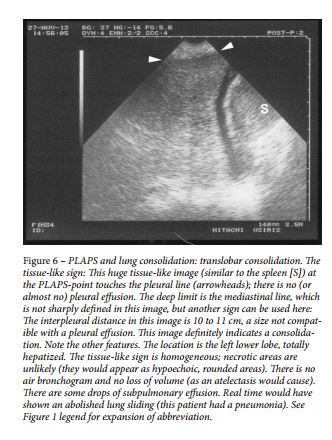 Interstitial syndrome generates lung rockets on lung ultrasound ( Fig 7 ). 49 This application is a main point of discussion in this article.

Pneumothorax was first approached in lung ultrasonography using the sole abolition of lung sliding.  This sign had a poor specificity until it was associated with the A-line sign ( Fig 8 ).  Abolished lung sliding generates the stratosphere sign in M-mode. Lung sliding (or its equivalent, the lung pulse) or B-lines rule out pneumothorax. The lung point (Fig 9) is a pathognomonic sign. Pneumothorax occurring in patients with severe dyspnea or adherences is beyond the scope of this article. 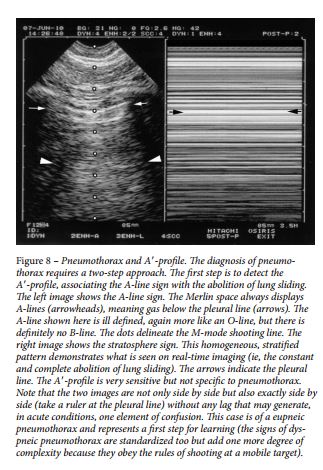 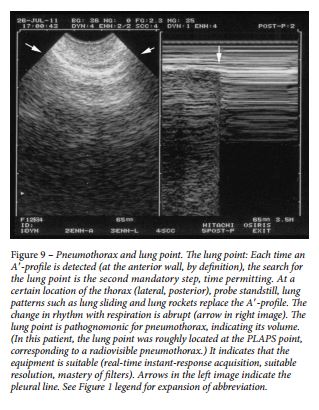