In this post I link to and list individually the Introduction to Clinical Autonomic Testing  Workshop (16 Course Videos, 1 Bonus Video) by Dr. Wolfgang Singer, accessed 8-16-2022.

About The Introduction To Clinical Autonomic Testing Workshop (Bonus Video) No transcript for this video.

Overview of the Autonomic Reflex Screening (1 of 16)

So, with all that in mind, what I will be talking here mostly is the autonomic reflex screen. This is a test battery that was established over 30 years ago.

It’s been extensively validated, it’s been used in studies over studies. We do about 4,000 of those a year at Mayo Rochester alone, and this testing battery has been adopted into commercially available equipment with dedicated software and is available for standardized testing now at other institutions as well and increasingly found across the country.

So, the autonomic reflex screen consists of 4 parts. There’s the assessment of sudomotor function and specifically postganglionic sudomotor function using a test called the quantitative sudomotor axon reflex test or QSART. Then we look at heart rate responses to deep breathing to assess the cardiovagal function. We look at Valsalva maneuver to look at both cardiovascular adrenergic and cardiovagal function, and we look at a head up tilt, mostly looking at cardiovascular adrenergic function. And, this table, this is a little busy, but it basically shows you that the test we’re doing fulfill all those attributes that I mentioned before: sensitive, specific, reproducible, physiologic basis, etc., and so this is really how they got into that battery from the first place. [The speaker forgot to show the slide to the audience.] 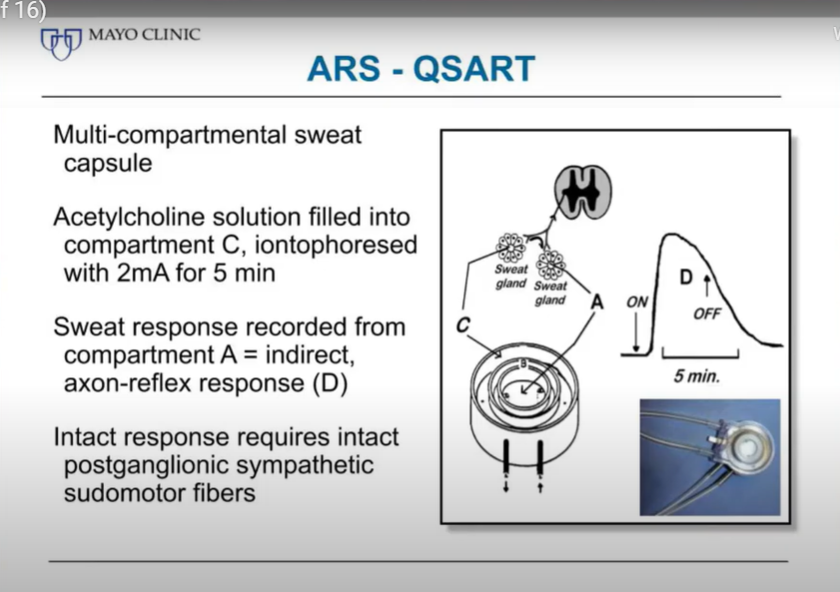 What we’re really interested in is the response in the center compartment of that capsule because that’s separated from the outer rim and requires another form of stimulation to occur in order to see a response, and that’s an axon reflex. So we are basically stimulating a peripheral axon that then travels a distance to a different set of sweat glands where it induces the sweat response and that sweat response requires that the post ganglionic sympathetic fiber is intact and that’s where the axon reflex test is coming from and superior to direct stimulation of the sweat gland. 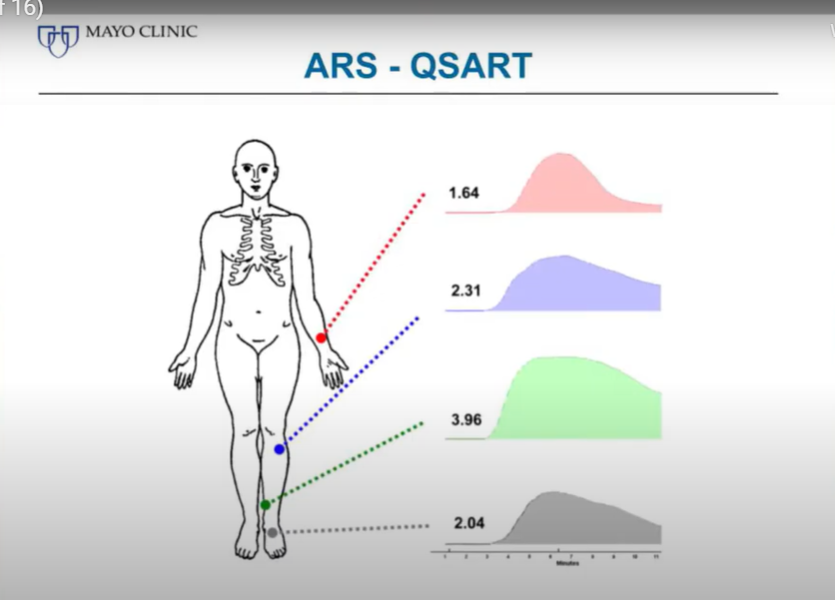 Here is an example of a normal sweat response on the left with this rather homogeneous response at all 4 sites, and then the right example of the patient with distal small fiber neuropathy and virtually absent response in the foot. 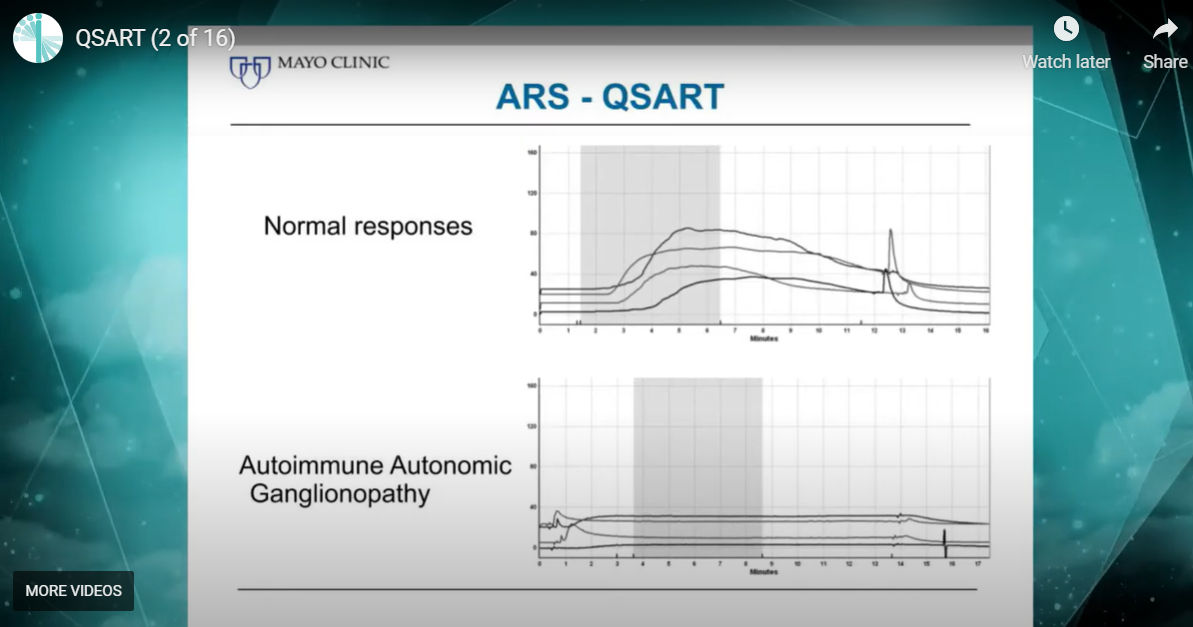 Here on top again, a normal example, and on the bottom, the patient with a severe form of autoimmune autonomic ganglionopathy who has absent responses at all 4 sites. Now if someone comes in on 20 mg of Amitriptyline the response could look just like that. So that is something to always keep in mind. It is not always pathology that results in abnormal tests.

Now as I mentioned before there are factors other than disease that can affect an abnormal sweat response, and I mentioned the medications already, so this is always something to keep in mind. Age and gender clearly play a role and then of course autonomic disease. Gender plays a big role in sudomotor responses. Responses from women, on average, markedly lower than the responses we get from men. Age is not as big of a factor. There’s a wide age range between 15 and 75 where there’s really no significant change occurring, it’s just the very young and the very old where there’s a drop off. 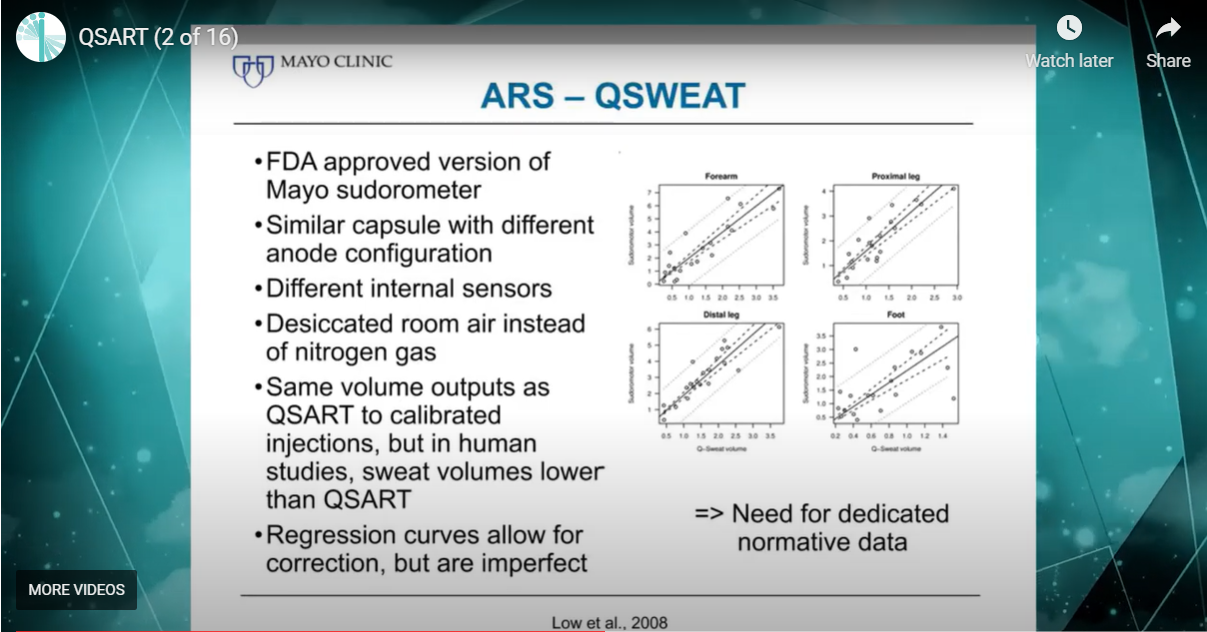 Now a brief word about QSWEAT. You may have heard that and now wonder what’s QSART, what’s QSWEAT? Really QSWEAT is the commercial version of QSART. It is still a QSART, it just has its own brand name. There’re a few differences from the original Mayo sudorometer, certain sensors, the type of gas used, etc. to the desiccant and so on. There’re a few differences but overall the principal is the same. And what we found out, our big surprise, is that QSWEAT responses tend to be smaller than QSART responses. They have still not figured out why that is in spite of extensive search. We have also tried to find conversion factors that allow us to convert one response to the other but that didn’t seem to work out, so we decided we need normative data specifically for QSWEAT and we derive those.