See also my post Links to The SPRINT Trial and to NEJM Resources and to WWW.SPRINTTRIAL.ORG Resources.

All that follows is from Antihypertensive Drug Management to Achieve Systolic Blood Pressure <120 mmHg in SPRINT [full text PDF] at www.sprinttrial.org:

Since the cardiovascular results of SPRINT have been announced to the public and the study participants, we believe that there may be interest among health professionals on the approach used by SPRINT to achieve the systolic blood pressure (SBP) goal of less than 120 mm Hg in the intensive arm. The design of the SPRINT trial has been described elsewhere and is available on the SPRINT website.1 The National Institute of Health press release is available on the SPRINT website (www.sprintrial.org).

SPRINT researchers from nearly 100 medical centers and clinical practices in the United States and Puerto Rico recruited 9,361 participants over the age of 50. When participants joined the study, they all had SBP of 130 mm Hg or higher and at least one additional cardiovascular disease (CVD) risk factor. We excluded participants with diabetes or who had a history of stroke because of ongoing other NIH funded studies. 30% of the participants were black and 36% were women; 28% were age ≥75 years, 28% had chronic kidney disease, and 20% had known cardiovascular disease (CVD). Below is a description of the approach that SPRINT used in the intensive arm of the study. This was a research protocol. Its goal was to ensure consistency in the nearly 100 sites but not to provide guidance for clinical practice. As a result each health professional will likely want to modify it for the specific circumstances of their practice setting and their patients. 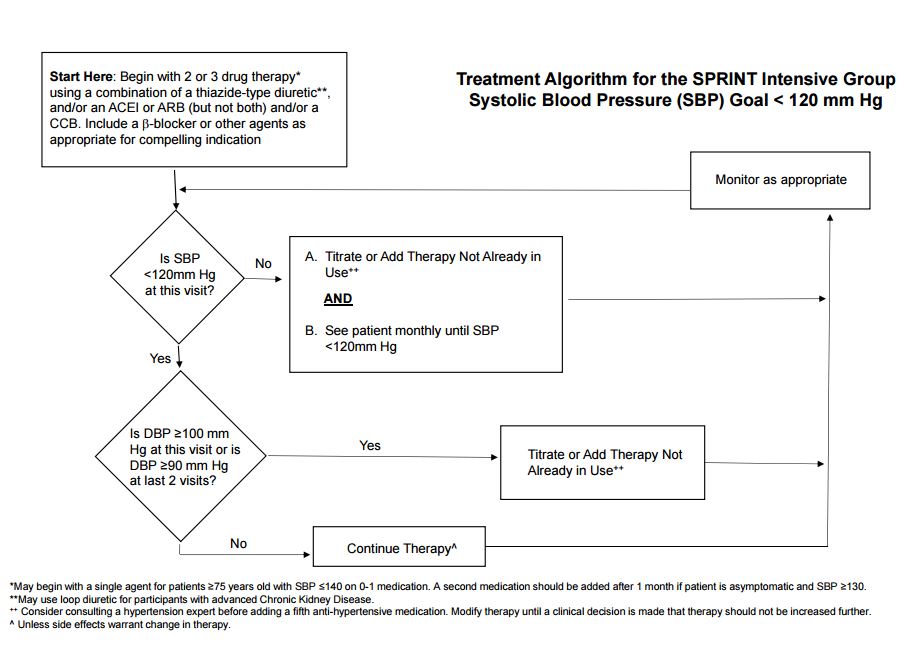 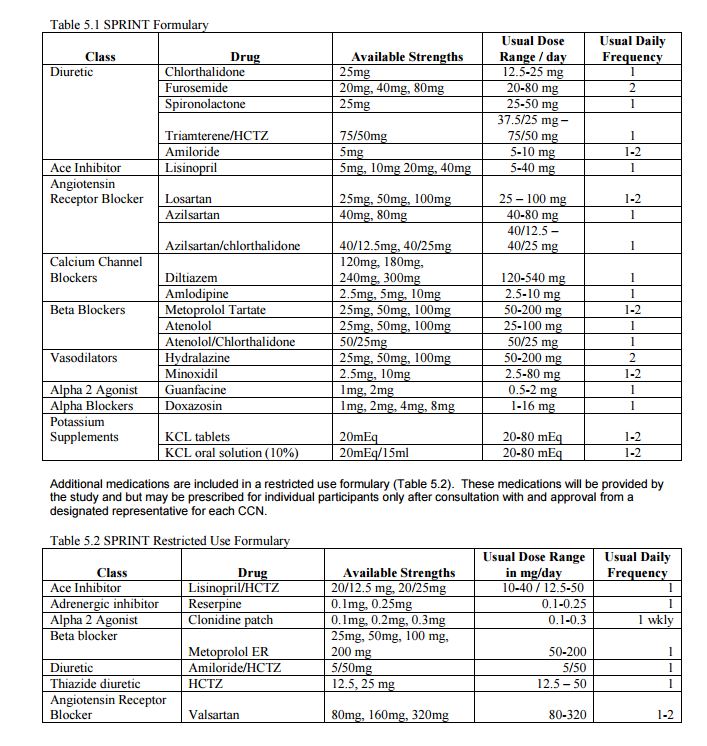 Selection of Antihypertensive Medications in SPRINT

The SPRINT trial tested two different systolic blood pressure (SBP) goals and was not designed to test specific medications. Therefore, the SPRINT BP treatment protocol was deliberately flexible in terms of the choice and doses of specific antihypertensive medications, but there were preferences among the drug classes, based on CVD outcome trial results and hypertension practice guidelines. 2-4 SPRINT had a drug formulary that was sufficiently broad to provide many choices and was at the same time cost-conscious. The formulary was comprised of the following classes of medications that were provided at no cost to participants: diuretics (thiazide-type, loop, and potassium-sparing), angiotensin converting-enzyme (ACE) inhibitors, angiotensin receptor blockers (ARBs), calcium channel blockers (CCBs), beta-blockers, vasodilators, alpha2 agonists, and alpha-blockers. A complete list of medications used in the SPRINT trial can be found at the end of this document. Our experience showed that this formulary served the participants very well, although other non-formulary antihypertensive medications could also be used as deemed appropriate by individual SPRINT site investigators. While the ultimate choices of medications were determined by individual investigators, they were encouraged to use regimens that included one or more drug classes that have been shown to confer strong cardiovascular benefits by previous large randomized controlled hypertension trials. These preferred regimens included a thiazidetype diuretic, calcium channel blocker, ACE inhibitor and ARB (Figure 1). The preference for the order in which these agents were selected was left to the investigator as long as the SBP goals were achieved. It was expected that many hypertensive patients would need at least 3 antihypertensive drugs to achieve a SBP goal <120 mm Hg. 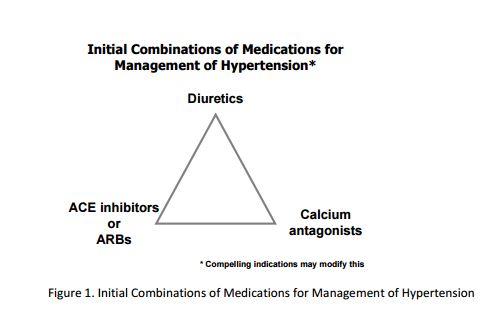 The following special recommendations were also given:

For most participants in the Intensive Group, a two- or three-drug regimen of a diuretic, either an ACE inhibitor or ARB, and/or a CCB was initiated at randomization. If a diuretic was contraindicated or not tolerated, an ACE inhibitor or ARB plus a CCB were initiated. If there was a compelling indication for a beta-blocker such as a history of coronary artery disease, the beta-blocker was included in the initial regimen, usually in combination with a diuretic. Similarly, if there was an indication for another specific class of drug (such as alpha-blockers for prostatic hypertrophy or ACE inhibitor for proteinuria), a drug in that class could be included. Drug doses were increased and/or additional antihypertensive medications added at each visit, usually at monthly intervals, until the SBP goal of <120 mm Hg was reached or the investigator decided no further antihypertensive medications should be added for reasons, such as adverse events, which were a rare exception. SPRINT provided a unique opportunity to determine both the efficacy and safety of intensive SBP control in elderly populations. However, based on limited data, there was concern that this population might be less tolerant of aggressive SBP lowering. Therefore, in participants ≥75 years of age randomized to the intensive BP goal who were on 0-1 antihypertensive medications and had baseline SBP <140 mm Hg, antihypertensive therapy was initiated with a single agent at the discretion of the investigator with a return visit scheduled in one month. If the participant was asymptomatic at the first post-randomization visit and SBP ≥130 mm Hg, a second agent was added and titration continued as indicated above. Compliance with their antihypertensive medications, low-sodium diet, exercise and other CVD risk reduction therapy such as smoking cessation was regularly encouraged.

Monthly visits were continued in the Intensive Group in SPRINT until SBP <120 mm Hg (or no more titration planned). Additional visits were scheduled as needed for management of adverse effects or for monitoring significant medication changes or other clinical issues.

Regular safety monitoring was an important part of the SPRINT visits. For example, ACE inhibitors, ARBs, aldosterone antagonists and diuretics can result in clinically significant alterations of serum electrolytes and kidney function. Thus, after the initiation of these agents, a chemistry profile was also obtained according to the table below (based on the National Kidney Foundation Kidney Disease Outcomes Quality Initiative (KDOQI) guidelines). Switching from one drug (e.g., ACE inhibitor) to another drug (ARB) in the same class is not considered as drug initiation, but changes in equivalent dosages should be taken into consideration when deciding the frequency of monitoring.

This entry was posted in Family Medicine, Hypertension, Internal Medicine. Bookmark the permalink.