Treatment of Dementia – YouTube Video From The Cleveland Clinic

Published on Dec 4, 2013
The Dementia Webcast Series assists health care providers who treat patients with dementia to stay abreast of current research on the latest advances in diagnosis and treatment presented at the Dementia 2012 conference. In this webcast, Dr. Dylan Wint reviews the signs, symptoms, and treatment of depression, psychosis, and behavioral disturbances in dementia patients. 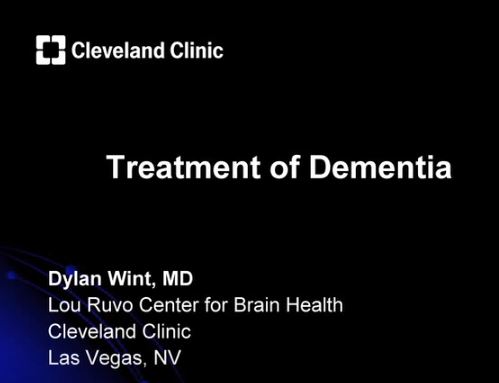 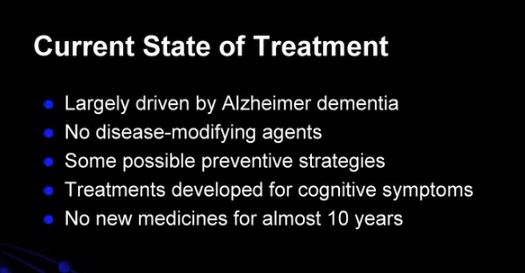 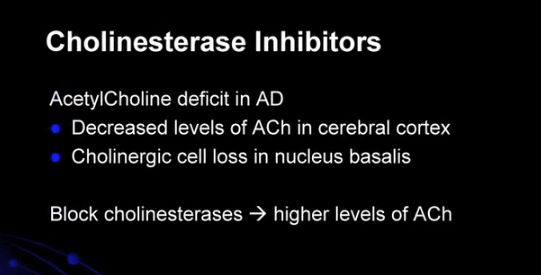 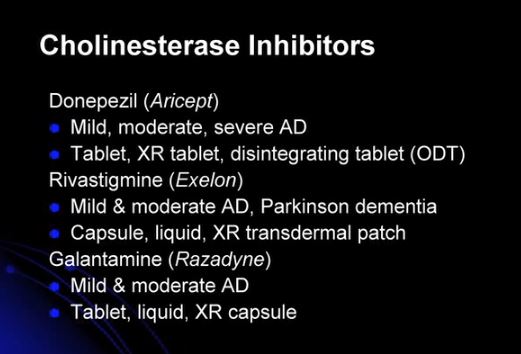 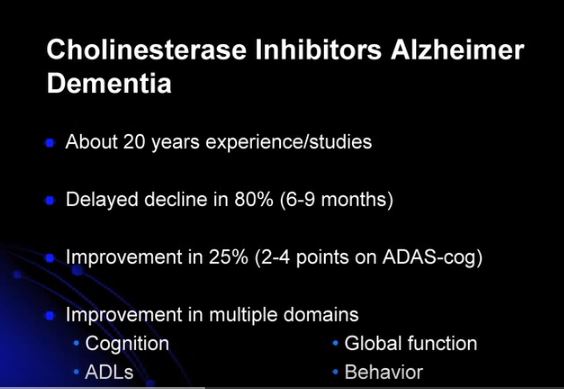 What Is the Alzheimer’s Disease Assessment Scale- Cognitive Subscale (ADAS-Cog)?

The Alzheimer’s Disease Assessment Scale- Cognitive Subscale test is one of the most frequently used tests to measure cognition in clinical trials. It’s more thorough than the Mini Mental State Exam, and it primarily measures language and memory. The ADAS-Cog consists of 11 parts and takes approximately 30 minutes to administer.

Most current research uses the ADAS-Cog, which is the sub-scale that measures cognitive ability.

What Does the ADAS-Cog Assess? 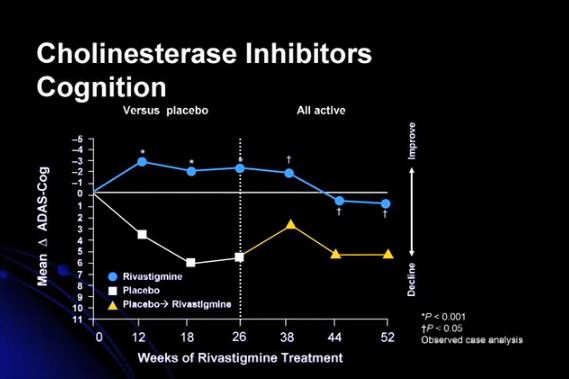 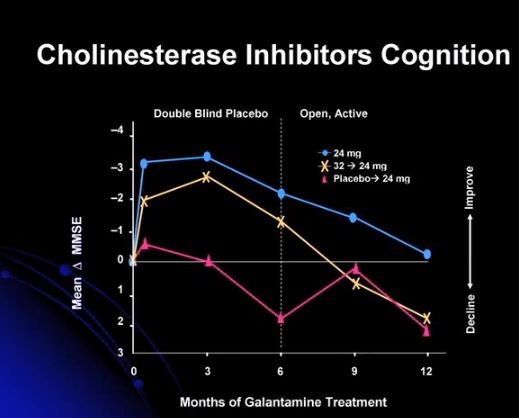 Eighth Slide Cholinsterase Inhibitors helps behavior as well as cognition, the speaker states, as measured by the Neuropsychiatric Inventory (NPI) 5:40: 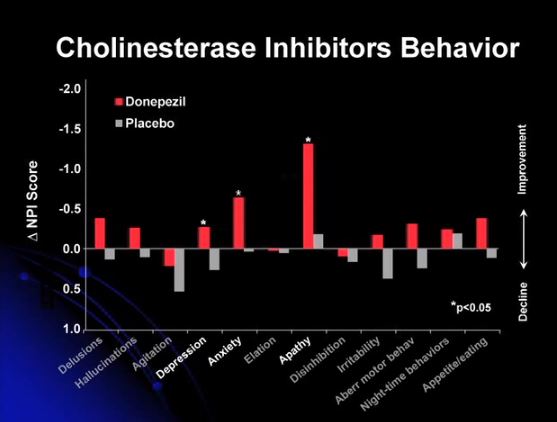 Here is the link to the full text PDF Neurophsychiatric Inventory. For detailed information on the NPI, see npitest.net. 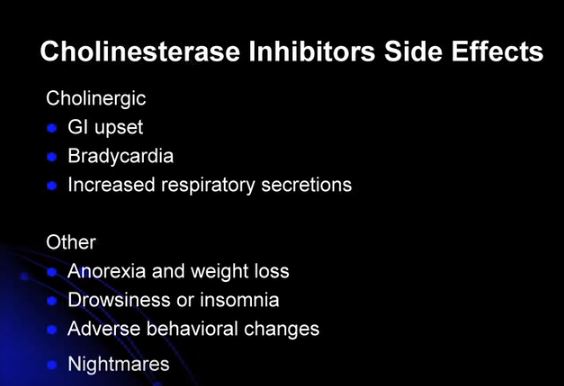 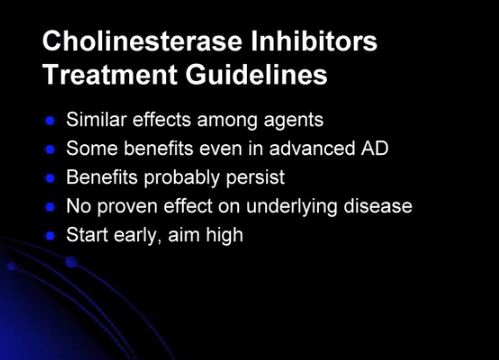 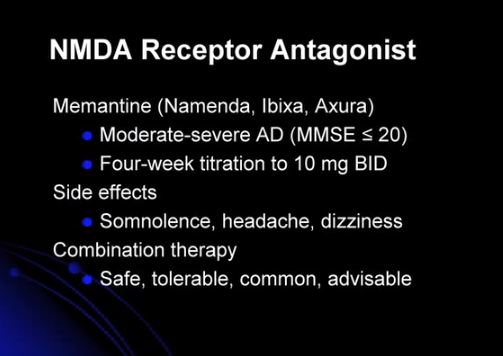 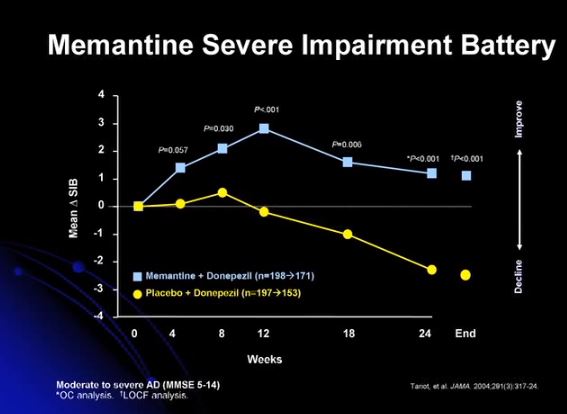 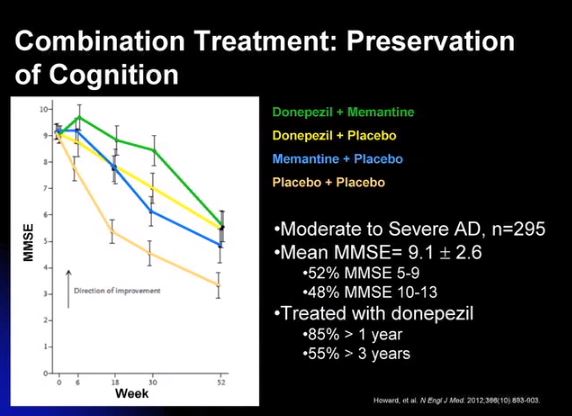 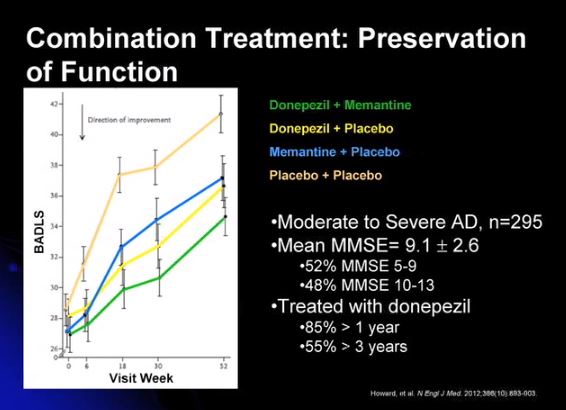 Activities of Daily Living from the International Encycopedia of Rehabilitation

Activities of Daily Living (ADL) is used in rehabilitation as an umbrella term relating to self care, comprising those activities or tasks that people undertake routinely in their every day life. The activities can be subdivided into personal care or Basic ADL (BADL) and domestic and community activities – Instrumental ADL (IADL).

Specifically, James, (2008) suggests that BADL “is typically restricted to activities involving functional mobility (ambulation, wheelchair mobility, bed mobility and transfers) and personal care (feeding, hygiene, toileting, bathing and dressing)” (539). Whilst an early definition of IADL comes from Katz, (1983) who stated that “…instrumental activities of daily living functions are concerned with a person’s ability to cope with her/his environment in terms of such adaptive tasks as shopping, cooking, housekeeping, laundry, use of transportation, managing money, managing medication and the use of the telephone” (723). 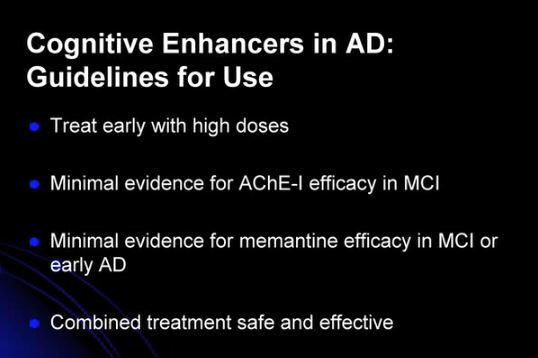 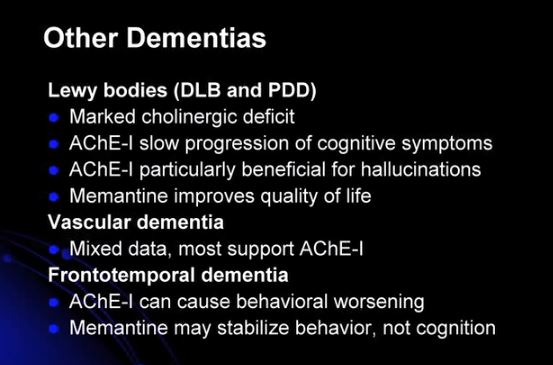 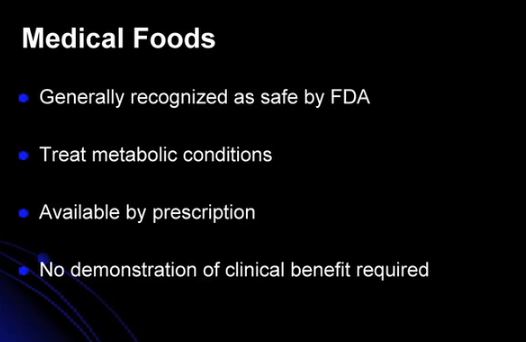 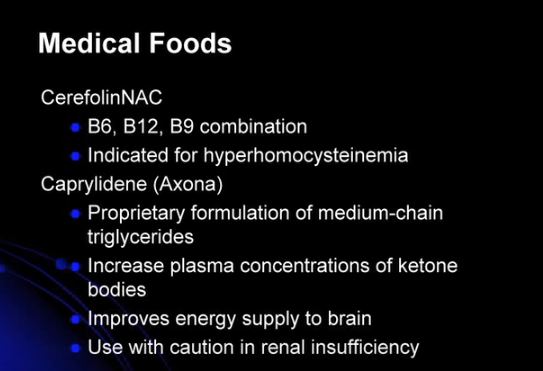 Ketone Bodies
As noted above, the brains of patients with AD display early, progressive, region specific, declines in the cerebral metabolic rate of glucose [39, 41]. Normally, the main energy substrate for the brain is glucose. However, in certain situations, such as extended fasting, the liver produces ketone bodies that serve as an alternative energy source for extrahepatic tissues, including the brain [72–74]. Ketone bodies are an efficient cellular fuel [75–76]; and results from preclinical studies have suggested that induced ketosis may be beneficial in AD [77, 78]. A small study that included 23 older adults with MCI who received either a high carbohydrate or ketogenic diet for 6 weeks indicated improved verbal memory performance for the latter group (P=0.01). Results from this study also indicated that ketone levels were positively correlated with memory performance (P= 0.04) [79]. While this intervention has promise, it may be difficult to maintain patients on ketogenic diets for extended periods.

Use of a medical food provides an alternative to a low-carbohydrate diet for raising levels of ketone bodies. Administration of medium chain triglycerides (MCTs) that increase blood levels of ketone bodies has been shown to be beneficial for the treatment of patients with mild-to-moderate AD [80]. The efficacy and safety of MCTs for the treatment of mild-to-moderate AD have been assessed in a multicenter, randomized, double-blind, placebo-controlled study of 152 outpatients with MMSE scores between 14 and 24 at screening [80]. Subjects were randomized to 90 days of treatment with either MCTs or placebo followed by a 2-week washout. All subjects were allowed to continue on stable concomitant AD treatments (80% were taking a ChEI and/or memantine) [80]. Treatment-associated changes from baseline in ADAS-Cog scores were analyzed in subgroups of patients based on APOE ε4 genotype. Per protocol and dosage-compliant patients lacking the APOE ε4 allele and administered MCTs demonstrated a significant difference from placebo in ADAS-Cog at both days 45 and 90 (both P<0.05) [80]. While this study was well controlled, it is still limited by a relatively short duration; and it is not clear whether long-term administration of MCTs will have sustained clinical benefit in patients with AD.

Cerefolin NAC
This medical food contains folate, vitamin B6, alpha-tocopherol, S-adenosyl methionine, N-acetyl cysteine, and acetyl-L-carnitine. Meta-analysis of results reported in a small number of studies carried out to date has provided no consistent evidence that folic acid, with or without vitamin B-12, positively affects cognitive function in healthy or cognitively impaired elderly individuals [81]. It has also been shown that high-dose vitamin B-6, vitamin B-12, and folate supplementation do not significantly slow cognitive decline in patients with AD [82]

Souvenaid includes omega-3 fatty acids, uridine, and choline. Results from a 12-week, randomized, double-blind controlled trial that included 225 patients with AD indicated significant improvement in a delayed verbal recall task for patients treated with this preparation versus controls (P=0.021). However, there were no between-group differences for Modified ADAS-Cog and other outcome scores, including Clinician Interview Based Impression of Change plus Caregiver Input, 12-item Neuropsychiatric Inventory, Alzheimer’s disease Cooperative Study-ADL, and Quality of Life in Alzheimer’s Disease [83]. As for the other medical foods considered in this section, available results provide no information about the long-term benefit of souvenaid. 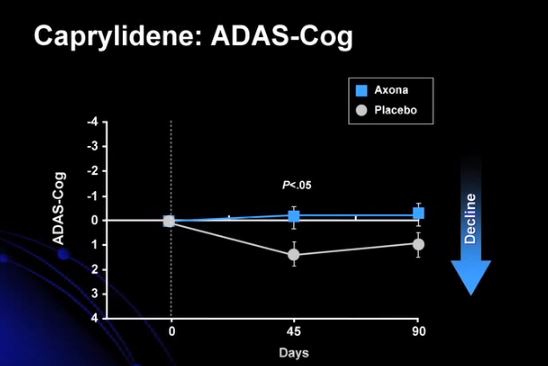 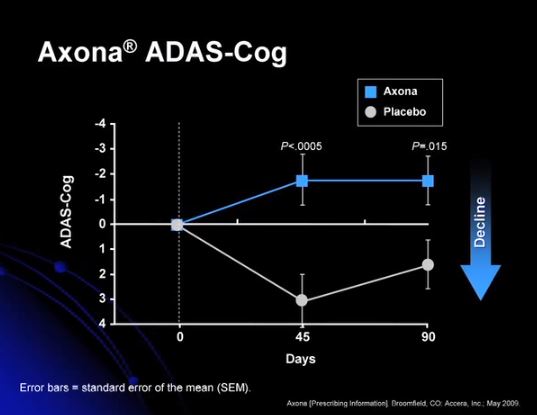 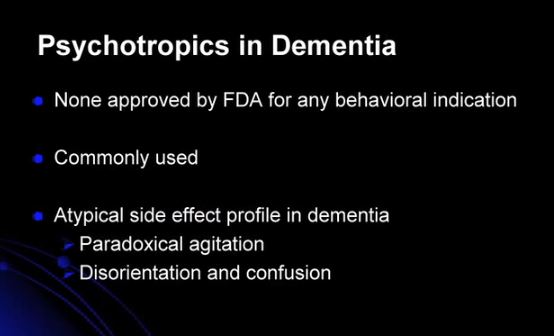 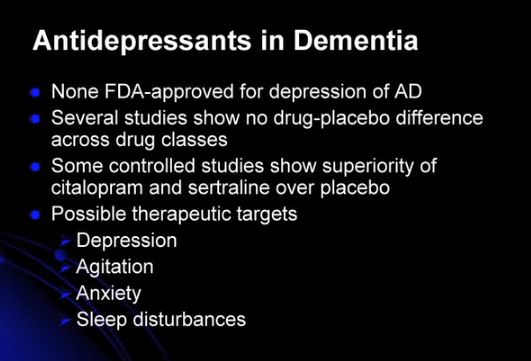 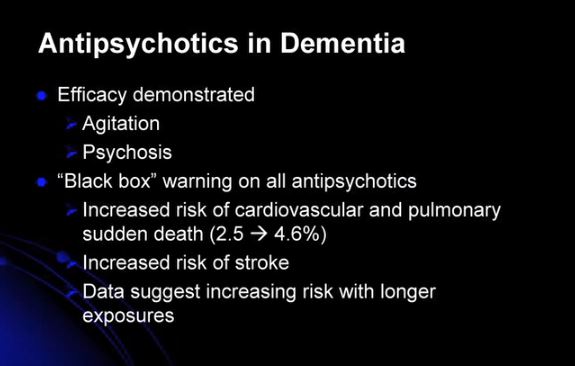 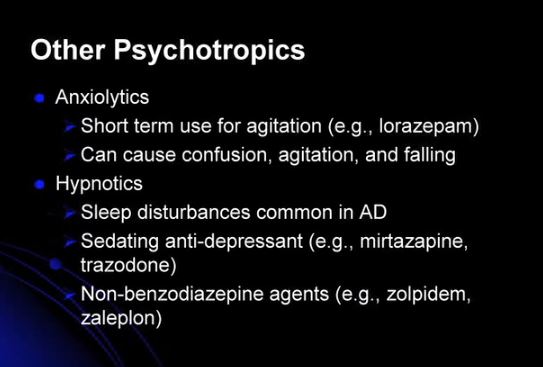 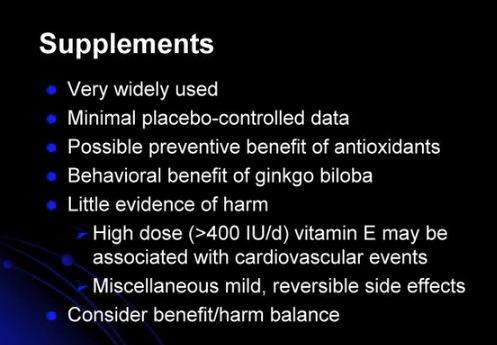 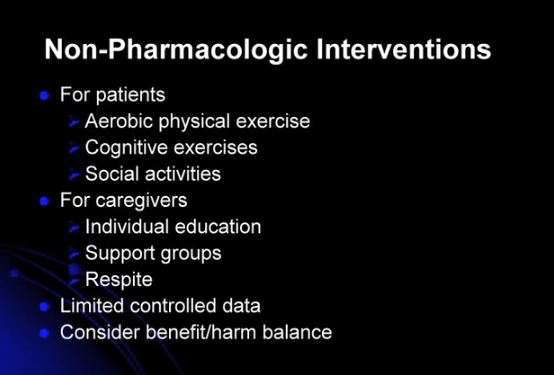 Twenty-seven 27:05. The lecturer says there are about a hundred drugs in clinical trials. Exercise gives important protective benefits as do other healthy lifestyle habits. 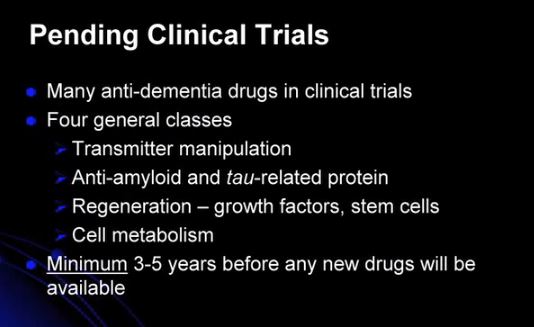 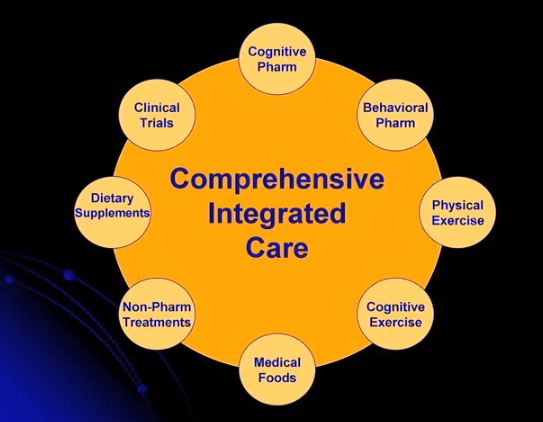 This entry was posted in Dementia, Mild Cognitive Impairment, Neurology. Bookmark the permalink.