Pediatric infectious disease specialist Dr. Brian Lee states that for  Acute Otitis Media (AOM), the first choice antibiotic is amoxicillin and the second choice is amoxicillin/clavulinate (use amoxil first because it has less diarrhea and less diaper dermatitis than does amox/clav).  You don’t have to use 10 days duration for everyone. He also states at least twice in his talk that azithromycin is not a good choice for AOM. (1)

What follows are excerpts from the American Academy of Pediatrics (AAP) 2013 AOM Guidelines: (2) 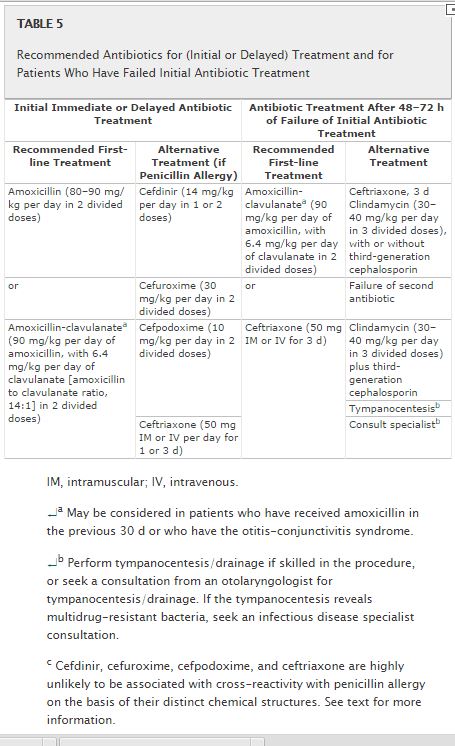 Key Action Statement 1A
Clinicians should diagnose AOM in children who present with moderate to severe bulging of the TM or new onset of otorrhea not due to acute otitis externa. (Evidence Quality: Grade B, Rec. Strength: Recommendation)

Key Action Statement 1B
Clinicians should diagnose AOM in children who present with mild bulging of the TM and recent (less than 48 hours) onset of ear pain (holding, tugging, rubbing of the ear in a nonverbal child) or intense erythema of the TM. (Evidence Quality: Grade C, Rec. Strength: Recommendation)

Key Action Statement 1C
Clinicians should not diagnose AOM in children who do not have MEE (based on pneumatic otoscopy and/or tympanometry). (Evidence Quality: Grade B, Rec. Strength: Recommendation)

Key Action Statement 2
The management of AOM should include an assessment of pain. If pain is present, the clinician should recommend treatment to reduce pain. (Evidence Quality: Grade B, Rec. Strength: Strong Recommendation) 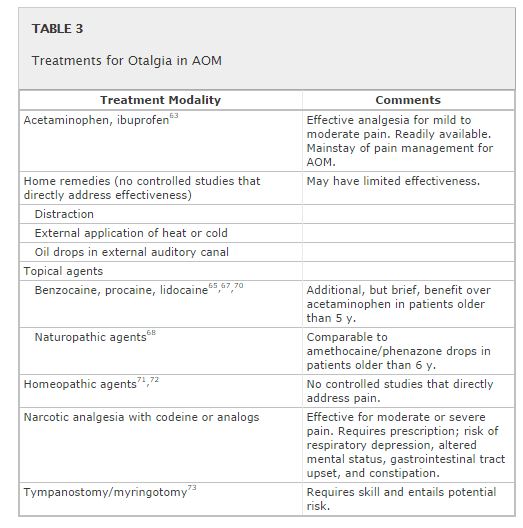 Pain associated with AOM can be substantial in the first few days of illness and often persists longer in young children.57 Antibiotic therapy of AOM does not provide symptomatic relief in the first 24 hours58–61 and even after 3 to 7 days, there may be persistent pain, fever, or both in 30% of children younger than 2 years.62 In contrast, analgesics do relieve pain associated with AOM within 24 hours63 and should be used whether antibiotic therapy is or is not prescribed; they should be continued as long as needed. The AAP published the policy statement “The Assessment and Management of Acute Pain in Infants, Children, and Adolescents”64 to assist the clinician in addressing pain in the context of illness. The management of pain, especially during the first 24 hours of an episode of AOM, should be addressed regardless of the use of antibiotics.

[There have been only two new studies addressing otalgia since the 2004 Guidelines.]

Bolt et al reported in 2008 on a double-blind placebo-controlled trial at the Australia Children’s Hospital emergency department conducted in 2003–2004.65 They used a convenience sample of children 3 to 17 years of age diagnosed with AOM in the ED. They excluded children with perforation of the TM, pressure-equalizing tube, allergy to local anesthetic or paracetamol, epilepsy, or liver, renal, or cardiac disease. Sixty-three eligible children were randomized to receive aqueous lidocaine or normal saline ear drops up to 3 times in 24 hours. They demonstrated a statistically significant 50% reduction in reported pain at 10 and 30 minutes but not at 20 minutes after application of topical lidocaine, compared with normal saline. Complications were minimal: 3 children reported some dizziness the next day, and none reported tinnitus. A limitation was that some children had received oral acetaminophen before administration of ear drops.

A Cochrane review of topical analgesia for AOM66 searched the Cochrane register of controlled trials, randomized controlled trials, or quasi-randomized controlled trials that compared otic preparations to placebo or that compared 2 otic preparations. . . . The Cochrane group concluded that there is limited evidence that ear drops are effective at 30 minutes and unclear if results from these studies are a result of the natural course of illness, placebo effect of receiving treatment, soothing effect of any liquid in the ear, or the drops themselves.

Key Action Statement 3A
Severe AOM
The clinician should prescribe antibiotic therapy for AOM (bilateral or unilateral) in children 6 months and older with severe signs or symptoms (ie, moderate or severe otalgia or otalgia for at least 48 hours, or temperature 39°C [102.2°F] or higher). (Evidence Quality: Grade B, Rec. Strength: Strong Recommendation)

Key Action Statement 3C
Nonsevere Unilateral AOM in Young Children
The clinician should either prescribe antibiotic therapy or offer observation with close follow-up based on joint decision-making with the parent(s)/caregiver for unilateral AOM in children 6 months to 23 months of age without severe signs or symptoms (ie, mild otalgia for less than 48 hours, temperature less than 39°C [102.2°F]). When observation is used, a mechanism must be in place to ensure follow-up and begin antibiotic therapy if the child worsens or fails to improve within 48 to 72 hours of onset of symptoms. (Evidence Quality: Grade B, Rec. Strength: Recommendation)

Key Action Statement 3D
Nonsevere AOM in Older Children
The clinician should either prescribe antibiotic therapy or offer observation with close follow-up based on joint decision-making with the parent(s)/caregiver for AOM (bilateral or unilateral) in children 24 months or older without severe signs or symptoms (ie, mild otalgia for less than 48 hours, temperature less than 39°C [102.2°F]). When observation is used, a mechanism must be in place to ensure follow-up and begin antibiotic therapy if the child worsens or fails to improve within 48 to 72 hours of onset of symptoms. (Evidence Quality: Grade B, Rec Strength: Recommendation)

The recommendations for management of AOM assume an accurate diagnosis on the basis of criteria outlined in the diagnosis section of this guideline. Many of the studies since the 2004 AAP/AAFP AOM guideline1 used more stringent and well-defined AOM diagnostic definitions than were previously used. Bulging of the TM was required for diagnosis of AOM for most of the children enrolled in the most recent studies.31,32 By using the criteria in this guideline, clinicians will more accurately distinguish AOM from OME. The management of OME can be found in guidelines written by the AAP, AAFP, and American Academy of Otolaryngology-Head and Neck Surgery.84,85

Key Action Statement 4A
Clinicians should prescribe amoxicillin for AOM when a decision to treat with antibiotics has been made and the child has not received amoxicillin in the past 30 days or the child does not have concurrent purulent conjunctivitis or the child is not allergic to penicillin. (Evidence Quality: Grade B, Rec. Strength: Recommendation)

Key Action Statement 4B
Clinicians should prescribe an antibiotic with additional β-lactamase coverage for AOM when a decision to treat with antibiotics has been made and the child has received amoxicillin in the past 30 days or has concurrent purulent conjunctivitis or has a history of recurrent AOM unresponsive to amoxicillin. (Evidence Quality: Grade C, Rec. Strength: Recommendation)

Key Action Statement 4C
Clinicians should reassess the patient if the caregiver reports that the child’s symptoms have worsened or failed to respond to the initial antibiotic treatment within 48 to 72 hours and determine whether a change in therapy is needed. (Evidence Quality: Grade B, Rec. Strength: Recommendation)

Initial Antibiotic Treatment Failure
When antibiotics are prescribed for AOM, clinical improvement should be noted within 48 to 72 hours. During the 24 hours after the diagnosis of AOM, the child’s symptoms may worsen slightly. In the next 24 hours, the patient’s symptoms should begin to improve. If initially febrile, the temperature should decline within 48 to 72 hours. Irritability and fussiness should lessen or disappear, and sleeping and drinking patterns should normalize.176,177 If the patient is not improved by 48 to 72 hours, another disease or concomitant viral infection may be present, or the causative bacteria may be resistant to the chosen therapy.

In children with persistent, severe symptoms of AOM and unimproved otologic findings after initial treatment, the clinician may consider changing the antibiotic (Table 5). If the child was initially treated with amoxicillin and failed to improve, amoxicillin-clavulanate should be used. Patients who were given amoxicillin-clavulanate or oral third-generation cephalosporins may receive intramuscular ceftriaxone (50 mg/kg). In the treatment of AOM unresponsive to initial antibiotics, a 3-day course of ceftriaxone has been shown to be better than a 1-day regimen.175 Although trimethoprim-sulfamethoxazole and erythromycin-sulfisoxazole had been useful as therapy for patients with AOM, pneumococcal surveillance studies have indicated that resistance to these 2 combination agents is substantial.130,149,183 Therefore, when patients fail to improve while receiving amoxicillin, neither trimethoprim-sulfamethoxazole184nor erythromycin-sulfisoxazole is appropriate therapy.

Tympanocentesis should be considered, and culture of middle ear fluid should be performed for bacteriologic diagnosis and susceptibility testing when a series of antibiotic drugs have failed to improve the clinical condition. If tympanocentesis is not available, a course of clindamycin may be used, with or without an antibiotic that covers nontypeable H influenzae and M catarrhalis, such as cefdinir, cefixime, or cefuroxime.