This post is second of a series I’ve made for my study notes on Cardiogenic Shock. This post contains links to and excerpts from Contemporary Management of Cardiogenic Shock: A Scientific Statement From the American Heart Association [PubMed Abstract] [Full Text HTML] [Full Text PDF]. Circulation. 2017 Oct 17;136(16):e232-e268.

The above article has been cited by 38 PubMed Central articles.

Our understanding of the complexity and pathophysiology of MI-associated CS in particular has evolved over the past 2 decades.2,3,25–27 In general, there is a profound depression of myocardial contractility resulting in a potentially deleterious spiral of reduced cardiac output, low blood pressure, and further coronary ischemia, followed by additional reductions in contractility (Figure 1). 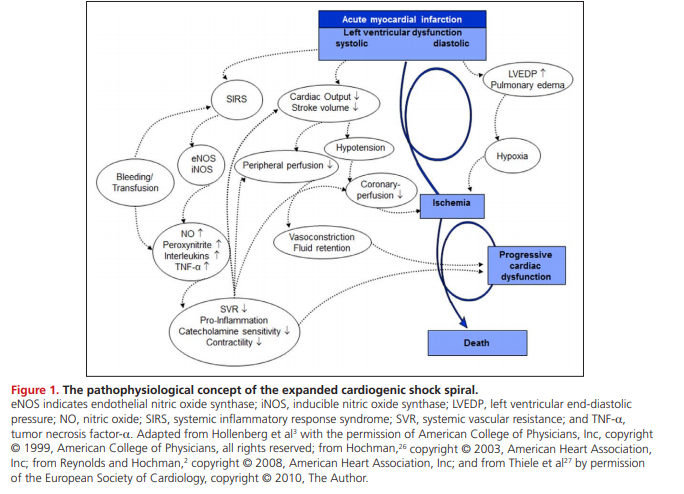 Early reports of CS described patients with HF and elevated central venous pressures (CVPs).34 With the advent of invasive hemodynamic measurements, patients with CS were further characterized by a low CI, an elevated systemic vascular resistance, and a high PCWP.35 This classic “cold and wet” (Figure 2) profile is the most frequent CS phenotype, accounting for nearly two thirds of patients with MI-associated CS.36

[But the above is not the only type of cardiogenic shock.]

Euvolemic or “cold and dry” CS typically describes a diuretic-responsive patient with chronic HF with a subacute decompensation but also represents a reported 28% of patients with MI-associated CS.36,40 Compared with patients with classic CS, those with euvolemic CS were less likely to have had a previous MI or chronic kidney disease and had significantly lower PCWPs.36

There is growing recognition of the cytokine cascade, chemokine response, and inducible NO synthase expression associated with coronary plaque rupture.26,41–46 As previously described, putative mechanisms also are associated with a “wet and warm” CS presentation wherein a systemic inflammatory response syndrome and vasodilation can occur after an MI.26,47 This phenotype is characterized by systemic inflammatory response syndrome features, lower systemic vascular resistance, and a higher risk of sepsis and mortality.48,49

[There are Two Other Hemodynamically Distinct Entities]

In the SHOCK trial registry, 5.2% of patients were normotensive with peripheral hypoperfusion despite an SBP >90 mm Hg.50 This group had comparable CIs, PWCPs, and LV ejection fractions but higher systemic vascular resistance compared with hypotensive patients with CS, thus highlighting the risk of relative hypotension and the potential for hypoperfusion without profound hypotension.

The reported prevalence of RV CS is 5.3% among patients with MI-induced CS. For these patients, the severity of shock may depend on the degree of both RV and LV ischemia, given a shared septum and the importance of ventricular interdependence on RV function.51–53 Hemodynamically, this cohort is characterized by relatively higher CVPs, LV ejection fractions, and lower pulmonary artery systolic pressures, with no differences in CI or PCWP. Only 71% of patients with an RV infarct in the SHOCK registry met the classic hemodynamic definition of RV infarction (CVP:PCWP ≥0.8); however, other studies have shown that fluid challenges increased the prevalence of this hemodynamic definition.51,54

A contemporary registry has reported that as many as 81% of patients presenting with CS had an underlying acute coronary syndrome (ACS).55 Thus, among patients with CS within the appropriate demographic or with risk factors for coronary artery disease, ACS should be the focus of initial diagnostic testing, and this testing should include an ECG within 10 minutes of presentation.56 Although 5% to 12% of ACS cases are complicated by CS, this presentation is often associated with a large degree of at-risk myocardium.4,57

In patients with a recent ACS, mechanical complications (including papillary muscle rupture, ventricular septal defect, or free wall rupture) were historically thought to be late complications but most frequently present within 24 hours of hospitalization.58,59 An index of suspicion and rapid echocardiography are required for such diagnoses.

Chronic HF can present in an acute decompensated state and may account for up to 30% of CS cases.60 These patients have often experienced a decline in disease stability or have poor adherence to guideline-based therapies that may trigger an acute worsening of their chronic disease. Treatment of patients with chronic HF presenting in CS can differ substantially from the treatment of other types of CS because the hemodynamic condition and neurohormonal milieu are often strikingly different. Patients with HF often have profound upregulation of vasoconstrictor substances such as angiotensin II, endothelin-1, and norepinephrine.61,62

Among patients who had cardiac surgery, 2% to 6% of patients develop postcardiotomy shock.63,64 This state may be attributable to low cardiac output (a result in part of myocardial hibernation, stunning, or inadequate cardioprotection), systemic vasodilation, or both.63–65

In acute myocarditis*, paradoxically, the sickest patients on presentation have the best odds of recovery, particularly in younger age groups.66,67 Survival may depend on rapid recognition of the clinical syndrome and early institution of aggressive hemodynamic support.67–70

*Links To And Excerpts From The 2013 ESC Guidelines On Myocarditis
Posted on October 28, 2017 by Tom Wade MD

Advanced valvular heart disease and prosthetic dysfunction, especially when previously undetected or inadequately monitored, may present as CS, although this has become less common as echocardiographic techniques and surveillance have improved.74–76

Thyroid disorders, both hyperthyroidism and hypothyroidism, can also cause circulatory collapse.77,78

Pregnancy-associated cardiac conditions, including both peripartum cardiomyopathy and acute coronary dissection, may present as CS.

Numerous additional causes of CS have been reported, but they typically occur in <1% of patients.79,80