In this post, I link to and excerpt from The Curbsiders‘ [Link is to the full episode list] episode #300 Celiac Disease with Dr. Amy Oxentenko, OCTOBER 18, 2021. By MATTHEW WATTO, MD.

Tighten up your glute-n facts! Take control of celiac disease (CD) with gastroenterologist, Dr. Amy Oxentenko (Chair of Medicine at Mayo Clinic AZ, @AmyOxentenkoMD). Learn how to recognize both classic and non-classical features of CD and  understand diagnostic testing, management and proper follow-up for patients.

Is celiac disease a gluten allergy?

Celiac disease (CD) is not a food allergy, but an autoimmune disease in response to gluten ingestion in genetically susceptible individuals which causes a chronic inflammatory response in the small bowel, leading to a variety of different symptoms.

Ask the patient to start from the beginning of when any GI issues began. Do a head-to-toe run through of systems including questions on oral ulcers, rashes, neuropathy or any of the other non-classic symptoms mentioned above. Be sure to ask about any family history of CD or other autoimmune diseases, which increase the chance a patient may have CD.

Note: Iron deficiency anemia is the most common extraintestinal feature of CD, and is most overlooked in menstruating women (Grisolano, 2004).

Kashlak Pearl: Celiac disease may present with non-classic symptoms like constipation (15% presented with per McElvaney, 1992) or in an obese patient.

Kashlak Pearl: 20% of patients are 60 years or older at the time of initial CD diagnosis (Cranney, 2007). Just because the patient is old doesn’t mean it can’t be celiac disease! 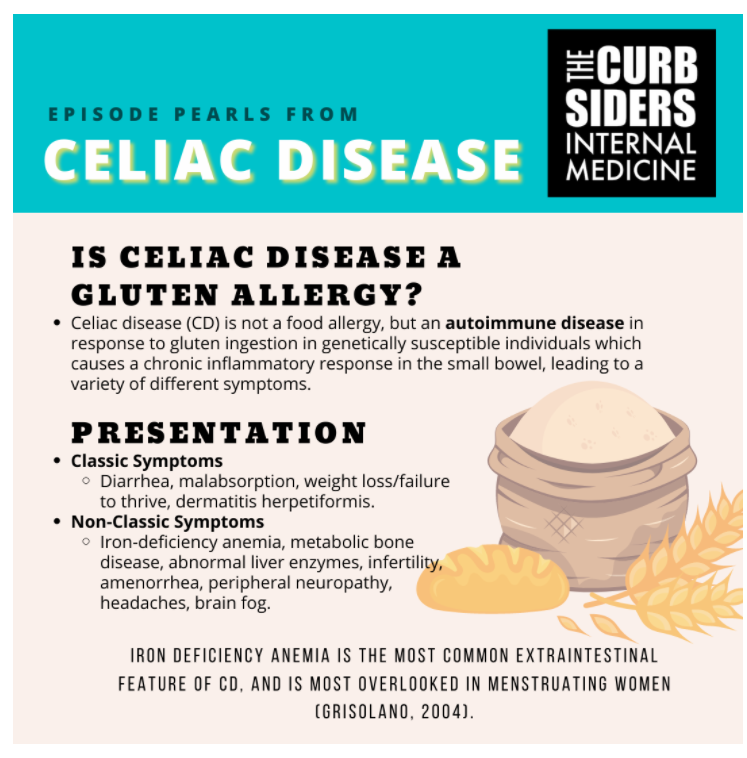 Celiac Serology: Check a tissue transglutaminase (TTG) IgA antibody, along with total IgA level to not miss in those with IgA deficiency (Rubio-Tapia, 2013).

Depending on presenting symptoms, tailor appropriate labs like CBC, ferritin, vitamin D, vitamin B12 and liver biochemistries. Other vitamin and minerals should be ordered as indicated (e.g., zinc, copper, etc), and other autoimmune testing considered (TSH, morning cortisol).

Expert Opinion: Have a low threshold for testing for CD due to its high prevalence, and also the high sensitivity/specificity of serology tests.

TTG-IgA remains a sensitive test, so only perform other tests if the clinical scenario or histology is not congruent with initial serology. Deamidated gliadin peptide antibodies (IgA or IgG) or endomysial antibodies may be considered as an alternative. Guidelines recommend individual tests rather than antibody panels which may lead to inappropriate procedures from lower specificity (Rubio-Tapia, 2013). Dr. Oxentenko prefers running the deamidated gliadin peptide antibody as a second test if necessary.

Note: Traditional anti-gliadin antibody testing is no longer recommended due to its low specificity (Rubio-Tapia, 2013).

How can we confirm celiac disease?

Confirm the diagnosis with a small bowel biopsy for:

Don’t stop gluten until the diagnosis is confirmed (if possible)!

The patient has to be consuming gluten for accurate results for serology and biopsy! If the patient has been gluten-free and it is deemed safe to challenge them with gluten, guidelines recommend consuming gluten for a minimum of 2 weeks prior to testing (Rubio-Tapia, 2013). However, Dr. Oxentenko advises her patients to include gluten in their diet for up to 8 weeks prior to testing if tolerated. The patient does not need to eat a whole loaf of Wonderbread every day, because even the amount of gluten in 1 slice of bread per day can suffice. Exceptions exist, such as detecting an elevated IgA TTG in a pregnant patient, where proceeding with a gluten-free diet rather than pursuing EGD first is reasonable.

In patients with symptoms suggestive of CD but have a serology and histology that are ambiguous and non-confirmatory, HLA-testing may be performed for ruling out CD (nearly 100% negative predictive value) (Karell, 2003). The presence of HLA-DQ2 or -DQ8 genes does not indicate CD, as 30-40% of the normal population are positive for these alleles; hence the role of HLA testing for ruling out CD. 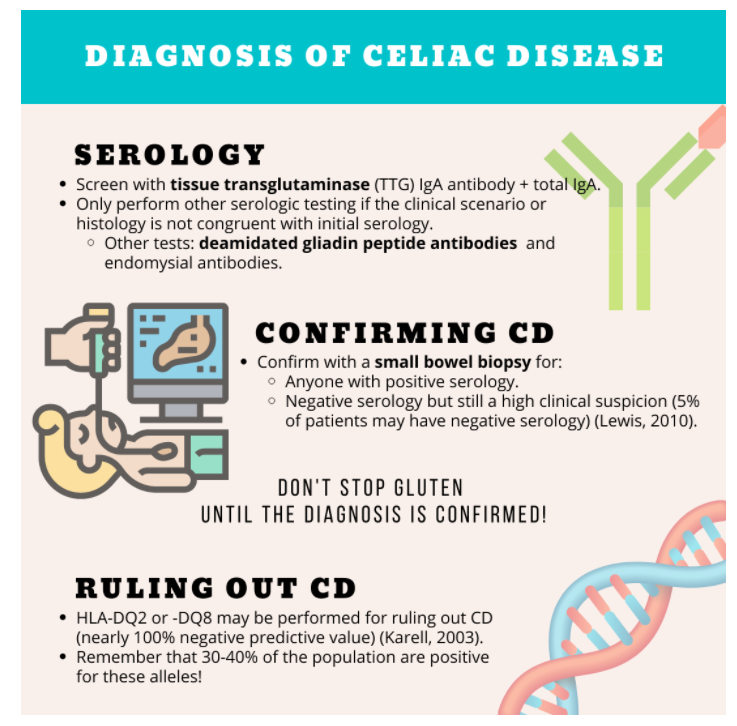 Note: While very rare, patients with celiac disease are at higher risk of enteropathy-associated T-cell lymphoma (Silano, 2008). Dr. Oxentenko sometimes reminds patients with mild symptoms and/or diet nonadherence to encourage a gluten-free diet, as that helps to decrease the inflammatory process in the small bowel and can reduce the risk of complications. 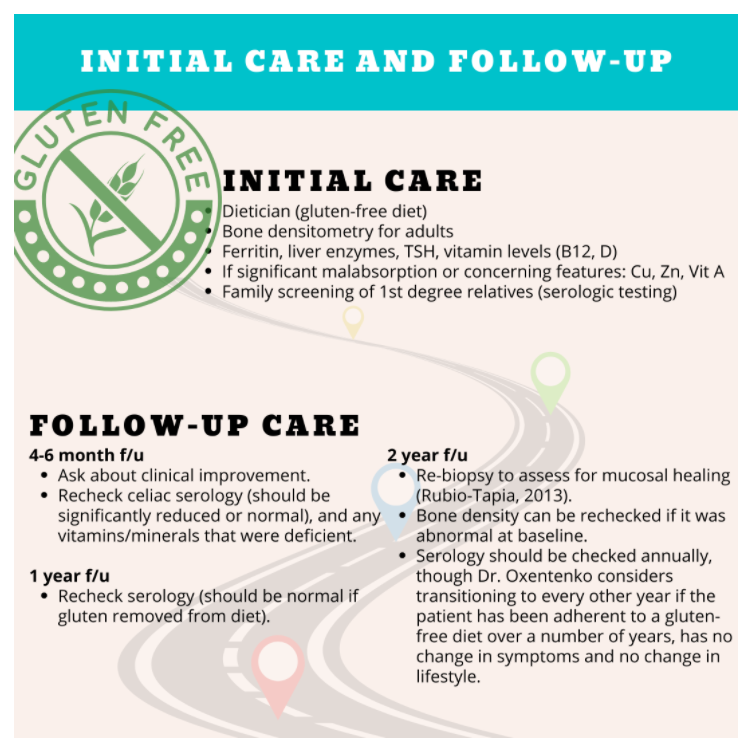 Nonresponsive to the gluten-free diet?

Kashlak pearl: Patients should specify at restaurants they have celiac disease even if ordering something labeled “gluten free” to reduce the risk of cross-contamination and to distinguish from those who may be gluten avoidant.. Many restaurants with items listed as “gluten-free dishes,” particularly pasta and pizza, had detectable gluten traces (Lerner, 2019).

There are patients with gluten sensitivities who have tested negative for CD but maintain a gluten-free diet due to relief of bothersome symptoms. Make sure the patient was not on a gluten-free diet during their initial testing.  HLA testing may be used to rule out CD if negative and avoid the need for a gluten challenge.  If the patient is already gluten-free at the time of consultation, Dr. Oxentenko first discusses their interest in even pursuing further testing for confirmation (serology and biopsy), as some patients don’t want to consider a gluten challenge and may opt to stay gluten-free regardless of diagnosis.

Use of olmesartan can cause a serologically-negative enteropathy. This can develop spontaneously no matter how long they have been taking it.  Avoid olmesartan in those with CD, and in any patient on olmesartan with diarrhea or features of malabsorption, small bowel biopsies should be obtained and drug discontinuation if an enteropathy is noted.  Try to avoid ARBs in general for patients with celiac disease.

Other culprits to look out for in cases of a serologically-negative enteropathy are checkpoint inhibitors, mycophenolate mofetil, and methotrexate. Also look out for autoimmune enteropathy, common variable immunodeficiency, tropical sprue and Whipple’s disease. 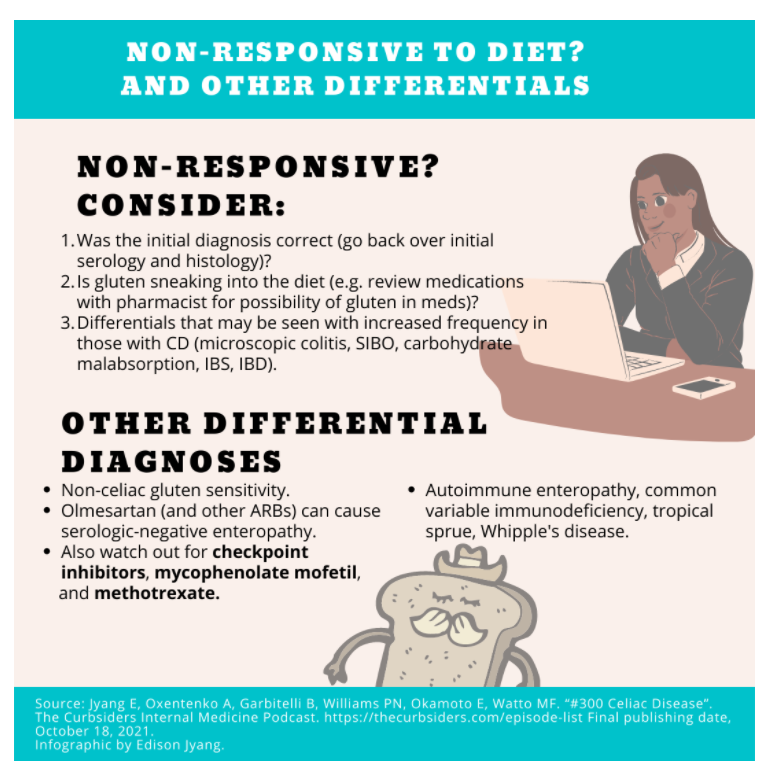 This entry was posted in Curbsiders, Gastroenterology. Bookmark the permalink.