I recently heard on the radio an ad from Doctor Patient Unity. It sounded like it was from a special interest front group. And it was.

Two doctor-staffing companies are pushing back against legislation that could hit their bottom lines.

Here is one of their ads: 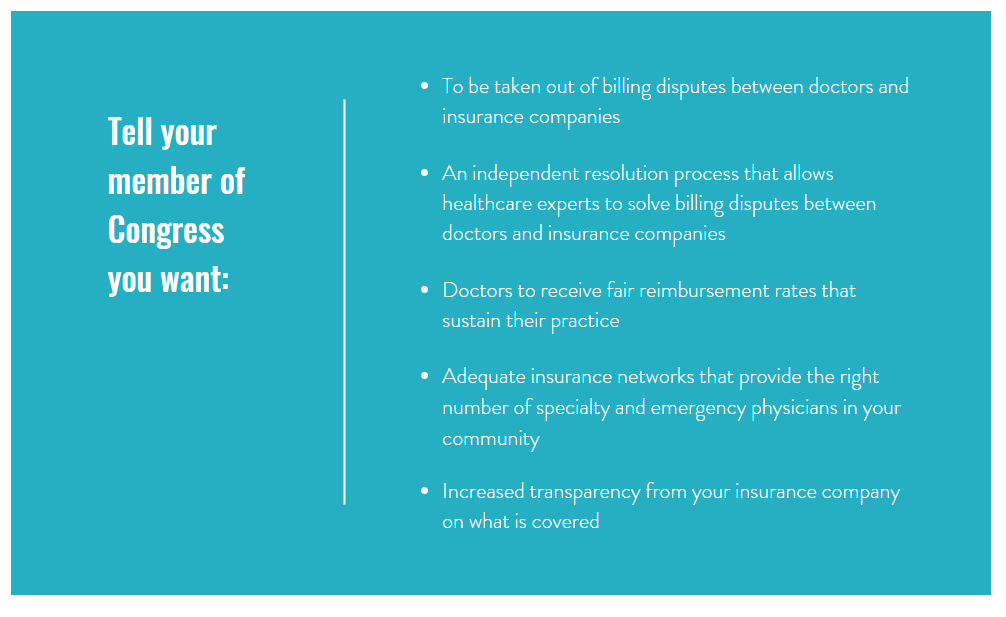 Here is a television ad from the Doctor Patient Unity front group:

Here is the article from the New York Times explaining who those guys really are.

Here are excerpts from the article:

Two doctor-staffing companies are pushing back against legislation that could hit their bottom lines [by ending surprise billing].

Then, in late July, a mysterious group called Doctor Patient Unity showed up. It poured vast sums of money — now more than $28 million — into ads opposing the legislation, without disclosing its staff or its funders.

Trying to guess who was behind the ads became something of a parlor game in some Beltway circles.

Now, the mystery is solved. The two largest financial backers of Doctor Patient Unity are TeamHealth and Envision Healthcare, private-equity-backed companies that own physician practices and staff emergency rooms around the country, according to Greg Blair, a spokesman for the group. 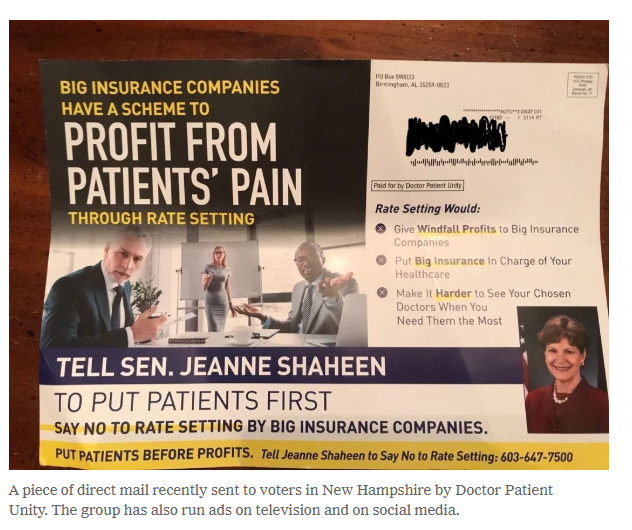 Early this summer, Congress appeared on its way to eradicating the large medical bills that have shocked many patients after emergency care. The legislation to end out-of-network charges was popular and had support from both sides of the aisle. President Trump promised his support.

Then, in late July, a mysterious group called Doctor Patient Unity showed up. It poured vast sums of money — now more than $28 million — into ads opposing the legislation, without disclosing its staff or its funders.

Trying to guess who was behind the ads became something of a parlor game in some Beltway circles.

Now, the mystery is solved. The two largest financial backers of Doctor Patient Unity are TeamHealth and Envision Healthcare, private-equity-backed companies that own physician practices and staff emergency rooms around the country, according to Greg Blair, a spokesman for the group.

TeamHealth was acquired in 2016 by the private-equity firm Blackstone Group in a deal valued at $6.1 billion. And last fall, in one of the largest takeovers of the year, the private-equity giant KKR spent $9.9 billion to acquire Envision Healthcare.

The ads generally omit references to surprise bills. Instead, they warn of “government rate setting” that could harm patient care. In one ad, an ambulance crew arrives with a patient, only to find the hospital dark and empty.

The proposed legislation, which may advance to floor votes this year, is potentially bad for business for TeamHealth and Envision. The two groups have waged many battles against insurers over what they see as low physician payments for emergency room visits. When there is no agreement with an insurer, the physicians work “out of network,” and bill patients for the amount that insurance does not pay.

A recent academic analysis of filings from a large commercial insurance company found that the firms, though Envision more than TeamHealth, have routinely operated outside the insurance networks of hospitals where their doctors practice. This often leads to surprise bills for patients.

Like all so-called dark money political action groups, Doctor Patient Unity is not legally required to reveal the names of its supporters and, in fact, appears to have worked hard to obscure its identity.

The $28 million that Doctor Patient Unity has spent on television and radio advertising outstrips the amount spent on advertising around Justice Brett Kavanaugh’s Supreme Court confirmation vote, according to an analysis of filings with the F.C.C. by Advertising Analytics.

Doctor Patient Unity has also spent hundreds of thousands of dollars on Facebook and Google advertising, and has been sending direct mail to voters in dozens of congressional districts. In some cases, the group describes the legislation as the “first step toward socialists’ Medicare-for-all dream.”

The group has focused its broadcast ads in areas where senators, mostly Republican, are running for re-election next year. In North Carolina, Doctor Patient Unity has spent more than $4 million on ads to influence Senator Thom Tillis’s vote on the bill. Another target of the ads is Mitch McConnell, the Senate majority leader, who has expressed support for legislation ending surprise billing

[Here is another ad from Doctor Patient Unity. It is a blatant lie.]

One ad [above], in heavy rotation in early August, featured a woman standing in front of a blank background urging voters to call their senators to stop a practice she calls “government rate setting.” She warned the policy could affect patients’ access to doctors in an emergency.

Legislation that has passed out of the Senate Committee on Health, Education, Labor and Pensions and a similar bill that has passed in the House Energy and Commerce Committee would ban the practice of sending bills to patients when they visit a hospital covered by their insurance. In situations where the doctors fail to negotiate a price with the patient’s insurer, the bills before Congress would mean that the doctors would be paid the median price that other such doctors in the area get.

Most doctor and hospital groups would rather have both sides present their preferred price to an independent arbitrator. Experts say the current legislation would probably lower the pay for doctors in the relevant medical specialties, even those who do not engage in surprise billing.

Together, Envision and TeamHealth employ tens of thousands of physicians, most in the kinds of hospital-based specialties — like emergency medicine, radiology and anesthesiology — that can generate large surprise bills.

“Private equity companies have the most to lose from prohibiting surprise billing, so it’s no surprise that they’d be fighting the hardest to blow up the process,” Loren Adler, an associate director of the U.S.C.-Brookings Schaeffer Initiative for Health Policy, said in an email. Mr. Adler, who has studied the issue, endorses the approach Congress is considering.

The Doctor Patient Unity campaign is similar to other dark-money efforts in which groups try to influence public policy without disclosing donors. Anna Massoglia, a researcher at the Center for Responsive Politics, which tracks such campaigns, said many of the tactics used by Doctor Patient Unity were familiar. “You do see the same groups and the same operatives popping up time and time again as these new issues emerge,” she said.

Several lawmakers said the mysterious nature of the ad campaign had left them more committed to the issue than they were before.

“This is an example of what happens when voters can’t tell who’s paying for ads because they’re funded by dark money; it causes a lot of confusion,” Senator Jeanne Shaheen, a Democrat from New Hampshire, said in a statement. “But I don’t care how many ads they run, how many mailers they send or how much dark money they spend. I’m not intimidated and am adamant that tackling surprise billing must remain top of Congress’s to-do list.”