Google+ Link To And Excerpts From “Antinuclear antibodies: When to test and how to interpret findings” With A Link To The Rheumatologic Review Of Systems | Tom Wade MD

Link To And Excerpts From “Antinuclear antibodies: When to test and how to interpret findings” With A Link To The Rheumatologic Review Of Systems

The appropriate interpretation of medical tests critically depends on only ordering a test when the test is indicated based on the physician’s estimation of pre-test probability.

The physician must take a careful medical history, including a complete review of systems, and a careful and appropriate physical exam to determine the pretest probability of a connective tissue disease.

For help on rheumatologic pretest probability, please see Link To Comprehensive Rheumatology Review Of Systems and History Form From The American College Of Rheumatology
Posted on November 9, 2018 by Tom Wade MD

In this post I link to and excerpt from Antinuclear antibodies: When to test and how to interpret findings [Link is to the PDF], J Fam Pract. 2015 January;64(1):E5-E8. By Habib U. Rehman, MB, FRCPC, FRCPI, FRCP (Glas), FACP.

The author states in his introduction:

> When clinical probability of connective tissue
diseases is low, the presence of ANA in the serum can
indicate chronic infection, neoplasm, or advancing age.

Here is his practice recommendation:

When is ANA testing warranted?

Indiscriminate use of ANA testing can yield positive results that
falsely point to CTD in a high proportion of patients and thereby
lead to further inappropriate testing and errant management decisions. To wit: The presence of ANA in the serum can be associated with any number of factors, such as genetic predisposition (eg, through histocompatibility locus DR3), environmental agents (viruses, drugs), chronic infections, neoplasms, and advancing age.1 Therefore, the test should not be ordered in a patient with low pretest probability of CTD. Moreover, higher titers of ANA are more clinically significant than lower titers. In one multicenter study, 31.7% of healthy individuals were ANA-positive at a serum dilution of 1:40, but only 5% were ANA-positive at a dilution of 1:160.2

What is the clinical significance of different immunofluorescent patterns?

Immunofluorescent ANA testing not only determines if such
antibodies are present in a patient’s serum but also reveals informative antibody patterns. Five distinct patterns of fluorescence are possible and can help differentiate between various CTDs (TABLE3): 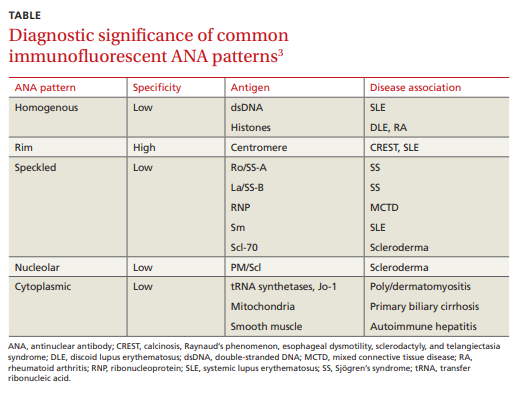 What is the next step if ANA is positive?

A positive ANA result warrants additional studies to identify specific autoantibodies suggested by the fluorescence pattern and by a patient’s signs and symptoms.

Most systemic autoimmune diseases have a highly characteristic profile of autoantibodies to cellular antigens. A patient’s clinical features and ANA fluorescence pattern should direct additional testing.

Pages E6 + E7 of the PDF give suggestions on further antibodies to order based on the patient’s clinical features and ANA flourescence pattern.