The presence of antinuclear antibodies (ANA) is mainly associated with connective tissue diseases (CTD). In addition, their presence is found in healthy people. These antibodies are more common in women and the elderly. Some drugs and xenobiotics are also important for the development of autoimmunity and ANA synthesis. Moreover, the deficiency of vitamin D in the body of patients correlates with occurrence of these antibodies. Unlike the healthy group, a positive ANA count was observed in patients with atopic dermatitis (AD) and in people with immune disorders. Antinuclear antibodies in low counts are also found in the course of chronic bacterial or viral infection and in patients with hematological malignancies. Also the possibility of false positive results, which may be caused by the choice of method used to determine antibodies, should be borne in mind. Taking into account all these factors, it is concluded that the ANA result itself has no diagnostic value.

Antinuclear antibodies (ANA) are present not only in patients with connective tissue diseases (CTD) but also in healthy people.

The percentage of the population with ANA is approximately 25% by using indirect immunofluorescence microscopy performed on HEp-2 cells (IIFA on HEp-2 or HEp-2000) [2]. This method is the reference method for ANA screening (gold standard) [2, 3]. According to some reports, using IIFA, ANA in low counts may appear in up to 40% of healthy people [4]. Moreover, patients with CTD, such as systemic lupus erythematosus, scleroderma and dermatomyositis, are also frequently ANA positive [3, 5, 6].

Even though ANA has very high sensitivity, its specificity is quite low [6]. In order to avoid overdiagnosis of autoimmune diseases, most laboratories set the upper limit as the cut-off point for positive results [8]. Thus, the quantification of antibodies is carried out by successive dilutions of the examined serum, which makes it possible to determine their count. In clinical practice, the count means such dilution of the serum when they are still detectable. Since all systemic lupus erythematosus (SLE) patients are ANA positive, ANA testing by IIFA is an excellent screening tool, which is very useful in diagnosis of this disease [9]. According to the American College of Rheumatology (ACR) and the European League Against Rheumatism (EULAR) one of the criteria of SLE is positive ANA at a titer of 1 : 80 or greater [10].

The incidence of a significantly elevated ANA level in the general population is 2.5% [2]. Most people with a positive ANA count are not diagnosed with autoimmune disease, and the probability of future disease is low.

Thus, positive ANA should not encourage extensive diagnosis of CTD in healthy subjects without clinical signs.

Bearing in mind that antinuclear antibodies can be present in healthy subjects as well as those with non-rheumatic diseases, the monitoring of their amount and further rheumatologic diagnosis should be mentioned only in case of clinical symptoms. The presence of ANA without signs of CTD does not require periodic rheumatic check-ups. Many studies show that ANA-positive subjects in the general population do not have an autoimmune disease and are unlikely to develop one in the future [6, 9, 10, 15]. 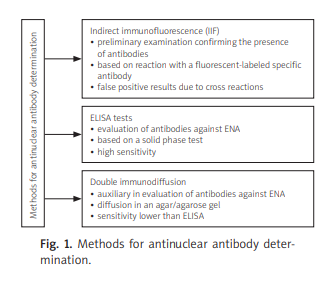 As mentioned above, the gold and recommended standard in the immunological diagnosis of systemic CTD is IIFA [3] based on the reaction of antigens with fluorescently labeled specific antibodies. At the site of labeled antibody binding to the antigen, characteristic illumination is observed in a fluorescence microscope equipped with a lamp emitting UV radiation using a marker. This method allows one to demonstrate multiple ANA that react with various antigens. For this reason, IIFA is used as a preliminary study to assess the presence of autoantibodies [16].

This method is time-consuming and requires experienced personnel. False positive results in immunofluorescence tests most often result from non-specific adsorption of antibodies and the presence of several related antigens with similar epitopes [17]. The count of ANA measured by the IIFA method in the liver in healthy subjects is 1/20, and in 1% of subjects it can reach 1/160.

Immunoenzymatic methods, i.e., ELISA tests, allow qualitative and quantitative determination of antibodies in all classes of immunoglobulins. They can be used to evaluate the dynamics of anti-DNA antibodies in the course of the therapy of SLE [3, 27]. ELISA tests are characterized by simple, but time-consuming execution. They have high sensitivity and specificity due to the use of highly purified antigens on solid media (solid phase) and the use of labeled antigens for detection, combined with a substance whose amount or activity can be measured. The advantage of ELISA tests is the elimination of the subjective factor during the determination [17, 28]. The disadvantage of this method is the presence of minimal contamination with additional antigens that cause false positive results [17].

The development of new diagnostic technologies has contributed to the introduction of multiplex methods, automated to various degrees and capable of simultaneously measuring numerous antinuclear antibodies. They are often equipped with expert programs in the field of digital image analysis. Automation of the IIFA method can significantly improve the standardization of ANA determination and help to reduce intra-laboratory variability [29]. On the other hand, it should be taken into account that ANAs are molecules with a high charge and can bind to other charged molecules in so-called cross reactions. Therefore, multiplex tests and the solid phase method may give a distorted picture of seropositivity in relation to currently used methods. Older methods, i.e., the immunodiffusion method, require a high concentration of antibodies, and hence they are not very sensitive [7]. In turn, multiplex tests and solid phase tests are sensitive and allow for high throughput, but their interpretation requires caution in the case of preclinical and subclinical disease in which the measured responses may be low, which is why immunofluorescence ANA tests should remain the gold standard for ANA testing [30, 31].

Determination of antinuclear antibody count and profile facilitates the diagnosis of CTD. However, it is worth remembering that ANA are often present in healthy people who will not develop autoimmune disease. Due to this fact, the positive ANA result alone has no diagnostic value. Nonetheless, supported by an appropriate medical history, it makes it possible to make an accurate diagnosis. However, considering the fact of quite frequent prevalence of ANA in the general population, its positive titer without clinical symptoms should not be the reason for prolonging diagnosis of CTD. Nevertheless, the patient should be informed that in the case of occurrence of clinical symptoms they should consult the physician. In summary, it is worth noting that the ANA assay is helpful in the diagnosis of rheumatic diseases, although their occurrence frequently is not synonymous with the diagnosis of CTD (Fig. 2).