Google+ Link To And Excerpts From "Episode 181.0: Subarachnoid Hemorrhage" From Core EM With Additional Links To Additional Resources From Radiopaedia - Tom Wade MD

Link To And Excerpts From “Episode 181.0: Subarachnoid Hemorrhage” From Core EM With Additional Links To Additional Resources From Radiopaedia

In this post, I link to and excerpt from Core EM‘s March 4, 2021 podcast and show notes, Episode 181.0: Subarachnoid Hemorrhage.

In addition to the above outstanding resource, consider reviewing Radiopaedia’s resources on subarachnoid hemorrhage [Link is to SAH search-314 results found].

Subarachnoid hemorrhage (SAH) is a type of extra-axial intracranial hemorrhage and denotes the presence of blood within the subarachnoid space.

Patients tend to be older middle age, typically less than 60 years old 2. Subarachnoid hemorrhage accounts for 3% of stroke and 5% of stroke deaths 2.

Patients typically present with a thunderclap headache, described as a sudden-onset headache that is the worst headache of their life. It is often associated with photophobia and meningism. Focal neurological deficits often present either at the same time as a headache or soon thereafter 2.

In a substantial number of patients (almost half 2), it is associated with collapse and decreased or loss of consciousness, even in those patients who subsequently regain consciousness and have a good grade.

Patients can be graded into five groups based on their clinical presentation, using the commonly employed Hunt and Hess grading system, which is predictive of outcome.

Three distinct patterns of subarachnoid hemorrhage have been described each with its own etiology and treatment/prognostic implications 4:

Although MRI is thought to be more sensitive, CT is frequently performed first due to wider availability. As well as being more sensitive to hemorrhage, MRI has greater sensitivity to the wide range of causative lesions.

A description of the radiographic features of each causative underlying lesion is clearly beyond the scope of this article; these are discussed separately (see above).

The sensitivity of CT to the presence of subarachnoid blood is strongly influenced by both the amount of blood and the time since the hemorrhage.

The diagnosis is suspected when a hyperdense material is seen filling the subarachnoid space. Most commonly this is apparent around the circle of Willis, on account of the majority of berry aneurysms occurring in this region (~65%), or in the Sylvian fissure (~30%) ref needed.

Small amounts of blood can sometimes be appreciated pooling in the interpeduncular fossa, appearing as a small hyperdense triangle, or within the occipital horns of the lateral ventricles 5.

Subarachnoid hemorrhages are grouped into four categories according to the amount of blood on unenhanced CT by the Fisher scale. This scale has been updated to the modified Fisher scale, which more accurately correlates the risk of vasospasm.

MRI is sensitive to subarachnoid blood and is able to visualize it well in the first 12 hours typically as a hyperintensity in the subarachnoid space on FLAIR 3.

MR angiography and MR venography are also able to detect a causative aneurysm or another source of bleeding, although in general MRI suffers from poor availability (compared to CT), longer scan times, and greater difficulty in transferring and looking after patients who are often unstable and intubated.

Digital subtraction catheter angiography remains the gold standard for diagnosis and characterization of vascular abnormalities and in many centers, even if the causative lesion is identified on MRA or CTA and it is thought to require surgical management, a catheter study is carried out.

The benefit of DSA is two-fold:

Additionally, depending on the cause, endovascular therapy (e.g. aneurysm coiling) may be appropriate.

Treatment and prognosis  and Differential diagnosis

Please see the Radiopaedia article for details on the above.

Traumatic subarachnoid hemorrhage is more commonly seen in the cerebral sulci than in the Sylvian fissure and basal CSF cisterns 1. When in the basal cisterns, it has an affinity for the quadrigeminal cistern and ambient cistern 2. tSAH is also commonly seen adjacent to skull fractures and cerebral contusions 3.

The exact mechanism of tSAH remains uncertain although it is clear that a number of etiologies exist and these will determine, at least to a degree, the distribution of blood. Causes of tSAH include 4:

CT of the brain is almost always the first scan obtained in the setting of trauma, often as part of a CT panscan.

Although the sensitivity of CT to the presence of subarachnoid blood is strongly influenced by both the amount of blood and the time since the hemorrhage, in the setting of trauma scans are almost always obtained early, often mere minutes or hours from head injury, making even small amounts of blood readily visible.

The distribution and amount of blood varies greatly depending on the underlying mechanism (see above) and from patient to patient.

Often a small amount of blood is seen filling a few sulci, sometimes with an adjacent cerebral contusion. Small amounts of blood can also sometimes be appreciated pooling in the interpeduncular fossa, appearing as a small hyperdense triangle, or within the occipital horns of the lateral ventricles.

Occasionally, and worrying for an underlying arterial dissection or an aneurysmal hemorrhage that preceded trauma, larger amounts of blood may be seen around the circle of Wilis and within the posterior fossa.

Traumatic subarachnoid hemorrhage has a better prognosis than aneurysmal SAH 2.

It can be difficult to delineate from tSAH, particularly as in many instances the cause of head trauma may have been spontaneous subarachnoid (e.g. while driving).

The distribution of blood, particularly if closely related to cerebral contusions can suggest traumatic etiology, whereas extensive blood around the circle of Willis should prompt arterial imaging to exclude an aneurysm.

That having been said, there are helpful features in suggesting that subarachnoid hemorrhage is the result of trauma, rather than the reason for trauma. These features include:

All that follows below is excerpted from Core EM‘s Episode 181.0: Subarachnoid Hemorrhage.

Apply to patients who are:

Do not apply to patients who have:

SAH cannot be ruled out if the patient meets any of the following criteria: 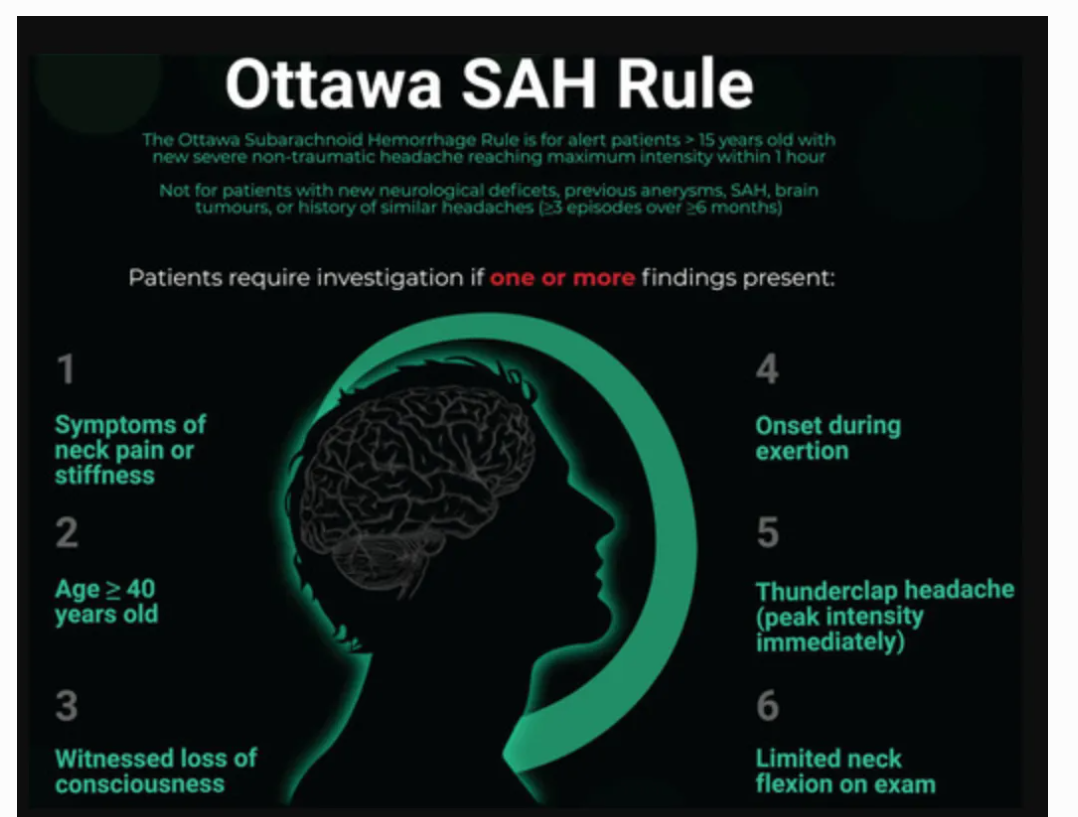