Over the past two to three decades, pelvic ultrasonography
and measurement of the serum concentration of human chorionic gonadotropin (hCG) (Table 1) have become mainstays in the diagnosis and management of early-pregnancy problems. These tests, which allow earlier detection of pregnancy and more accurate diagnosis of its complications than were previously possible, have revolutionized the management of intrauterine pregnancies and markedly reduced the morbidity and mortality associated with ectopic pregnancy.1,2

Although these tests have indisputable benefits, their misuse and misinterpretation can lead to interventions that inadvertently damage pregnancies that might have had normal outcomes.3,4 There are well-documented instances of women with
intrauterine pregnancies treated with intramuscular methotrexate for suspected ectopic pregnancy, leading to failure of the pregnancy (“miscarriage”) or the birth of a malformed baby.5 Furthermore, considerable evidence suggests that mistakes such as these are far from rare.

In this review, we examine the diagnosis of nonviability in early intrauterine pregnancy of uncertain viability and in early pregnancy of unknown location separately, focusing mainly on
the initial (or only) ultrasonographic study performed during the pregnancy. Our recommendations are meant to apply to any practice, subspecialty or community-based, that meets at least
the minimum quality criteria for pelvic ultrasonography listed in Table 1. 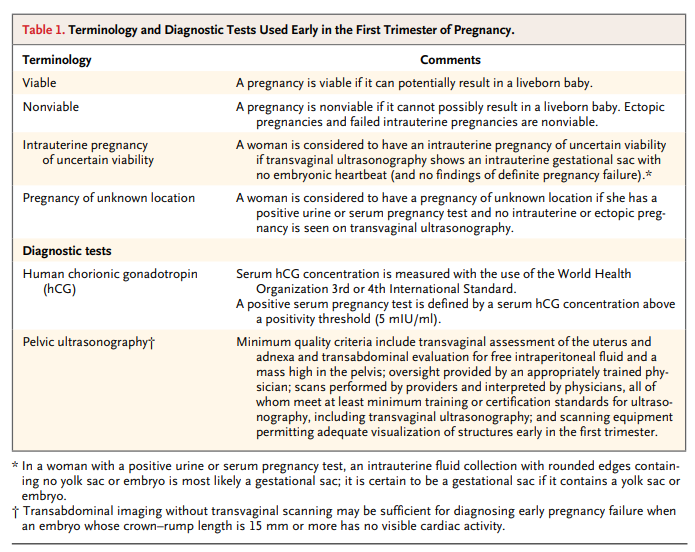 Diagnosing Pregnancy Failure in an Intrauterine Pregnancy of Uncertain Viability

The sequence of events in early pregnancy, as seen on transvaginal ultrasonography, follows a fairly predictable pattern. The gestational sac is first seen at approximately 5 weeks of gestational age,14,15 appearing as a small cystic-fluid collection with rounded edges and no visible contents, located in the central echogenic portion of the uterus (i.e., within the decidua). Previously described ultrasonographic signs of early pregnancy — the “double sac sign”16 and “intradecidual sign”17
— were defined with the use of transabdominal ultrasonography, but with current transvaginal ultrasonographic technology, these signs are absent in at least 35% of gestational sacs.18 Therefore, any round or oval fluid collection in a woman with a positive pregnancy test most
likely represents an intrauterine gestational sac (Fig. 1)19,20 and should be reported as such; it is much less likely to be a pseudogestational sac or decidual cyst, findings that can be present in a woman with an ectopic pregnancy.21,22 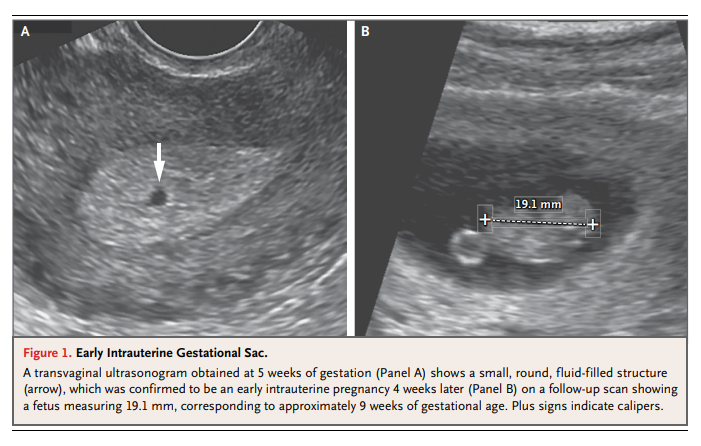 The yolk sac, a circular structure about 3 to 5 mm in diameter, makes its appearance at about 5½ weeks of gestation. The embryo is first seen adjacent to the yolk sac at about 6 weeks, at
which time the heartbeat is present as a flickering motion.14,15

Crown–Rump Length as a Criterion for Failed Pregnancy

These recent studies [See previous paragraph in the article] suggest that it is prudent to use a cutoff of 7 mm (rather than 5 mm) for crown–rump length with no cardiac activity (Table
2) for diagnosing failed pregnancy (Fig. 2A). This would yield a specificity and positive predictive value of 100% (or as close to 100% as can be determined). 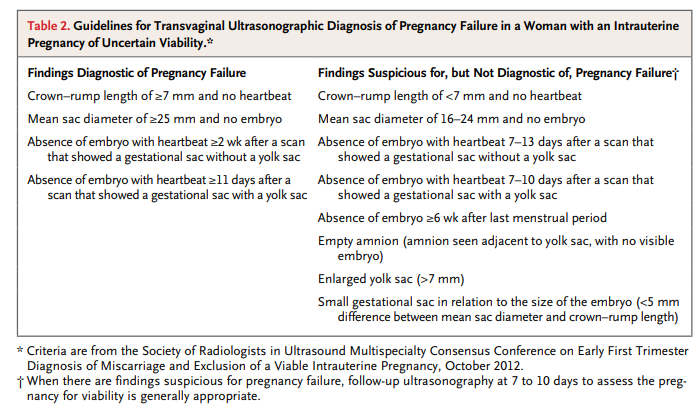 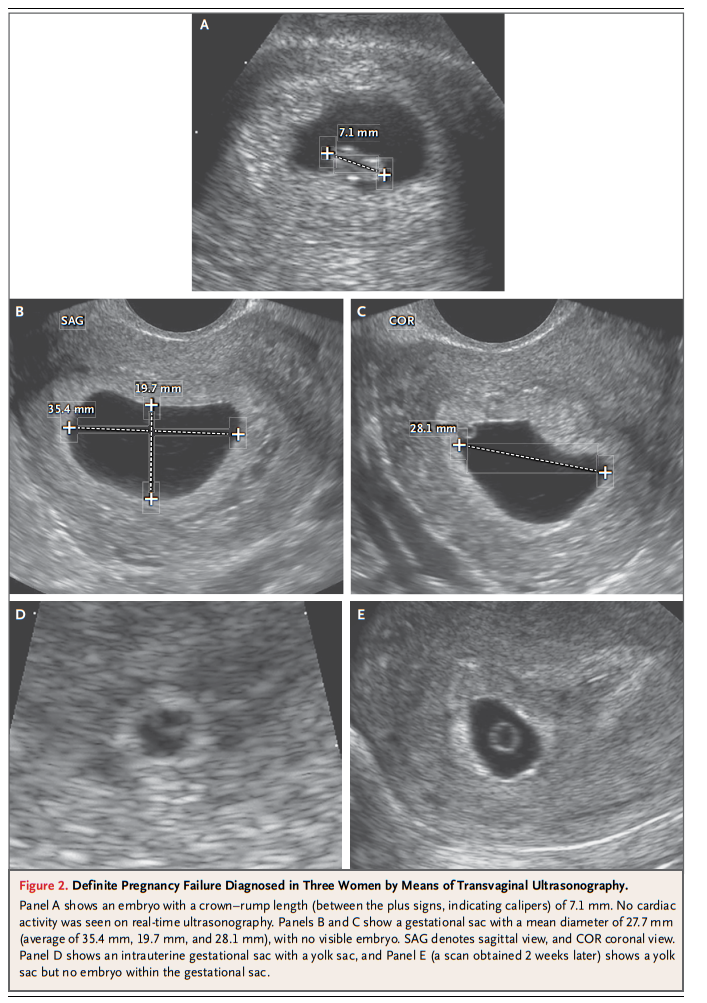 Because cardiac activity is usually visible as soon as an embryo is detectable, the finding of no heartbeat with a crown–rump length of less than 7 mm is suspicious for, though not diagnostic of, failed pregnancy (see video and Fig. S1 in the Supplementary Appendix, both available with the full text of this article at NEJM.org).10,23,25

Mean Sac Diameter as a Criterion for Failed Pregnancy

The size of the gestational sac, measured as the mean sac diameter (the average of the sagittal, transverse, and anteroposterior diameters of the sac), increases as pregnancy progresses.

These studies, in combination, [described in the previous paragraph] suggest that it is prudent to use a cutoff of 25 mm (rather than 16 mm) for the mean sac diameter with no visible
embryo (Table 2) in diagnosing failed pregnancy (Fig. 2B and 2C). This would yield a specificity and positive predictive value of 100% (or as close to 100% as can be determined). When the mean sac diameter is 16 to 24 mm, the lack of an embryo is suspicious for, though not diagnostic of, failed pregnancy (Fig. S2 in the Supplementary Appendix).

Not all failed pregnancies ever develop a 7-mm embryo or a 25-mm gestational sac, so it is important to have other criteria for diagnosing pregnancy failure.

The timing of events in early pregnancy — gestational sac at 5 weeks, yolk sac at 5½ weeks, and embryo with heartbeat at 6 weeks — is accurate and reproducible, with a variation of about ±½ week14,15; this consistency explains the time-related criteria for pregnancy failure listed in Table 2.

For example, if the initial ultrasonogram shows a gestational sac with a yolk sac and a follow-up scan obtained at least 11 days later does not show an embryo with cardiac activity, the diagnosis of failed pregnancy is established (Fig. 2D and 2E; also see Fig. S3 in the Supplementary Appendix).

Several ultrasonographic findings early in the
first trimester have been reported as abnormal.
These include an “empty” amnion,38 an enlarged
yolk sac,39 and a small gestational sac.40 Criteria for these abnormal findings are presented in Table 2. Because none of these signs have been extensively studied, they are considered to be suspicious for, though not diagnostic of, failed pregnancy.

Our intent here is not to review the broad topic of pregnancy of unknown location, but instead to focus on one important element:the role of an hCG level at a single point in time in diagnosing or ruling out a viable intrauterine pregnancy and in guiding patient-care decisions.

The hCG levels in viable intrauterine pregnancies, nonviable intrauterine pregnancies, and ectopic pregnancies have considerable overlap, so a single hCG measurement does not distinguish reliably among them.2,4,43  .  .  . As with the crown–rump length and mean sac diameter, however, more recent
research has shown that previously accepted values for the discriminatory hCG level are not as reliable for ruling out a viable pregnancy as originally thought.

Failure of the discriminatory hCG level to rule out a
viable intrauterine pregnancy, however, has been seen in singleton as well as multiple gestations. Several studies have documented cases in which an embryo with cardiac activity was
seen on follow-up ultrasonography after initial ultrasonography showed no gestational sac with an hCG level above 2000 mIU per milliliter12,48,49 and even above 3000 mIU per milliliter.12,48

If we use the same reasoning for women with a pregnancy of unknown location and hCG levels of more than 3000 mIU per milliliter, the likelihood of a viable intrauterine pregnancy is
[1÷(1+70+140)], or approximately 0.5%.

We recognize that these estimates of the likelihood of a viable intrauterine pregnancy in a woman with a pregnancy of unknown location whose hCG level is 2000 mIU per milliliter or
higher are not highly precise, given the limitations of the available data, but there are a number of reasons why presumptive treatment for ectopic pregnancy with the use of methotrexate or other pharmacologic or surgical means is inappropriate if the woman is hemodynamically stable.

First, as noted above, there is a chance of harming a viable intrauterine pregnancy, especially if the hCG level is 2000 to 3000 mIU per milliliter.

Second, the most likely diagnosis is nonviable intrauterine pregnancy (i.e., failed pregnancy),50 and methotrexate is not an appropriate treatment for a woman with this diagnosis.

Third, there is limited risk in taking a few extra days to make a
definitive diagnosis in a woman with a pregnancy of unknown location who has no signs or symptoms of rupture and no ultrasonographic evidence of ectopic pregnancy.

Fourth, the progression of hCG values over a period of 48 hours provides valuable information for diagnostic and therapeutic decision making.4,51 Thus, it is generally appropriate to do additional testing before undertaking treatment for ectopic pregnancy in a hemodynamically stable patient (Table 3).2,43,52 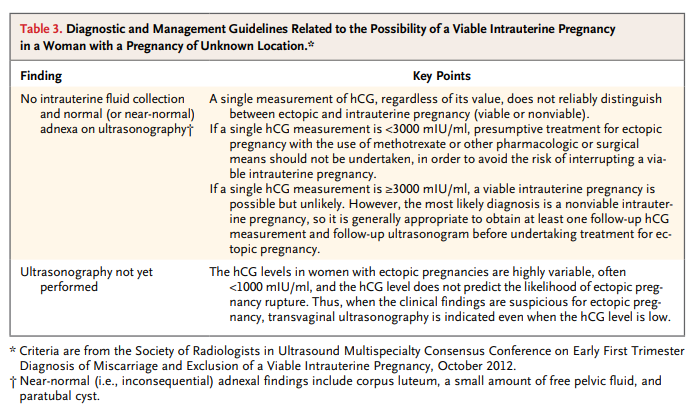 A false positive diagnosis of nonviable pregnancy early in the first trimester — incorrectly diagnosing pregnancy failure in a woman with an intrauterine gestational sac or ruling out viable intrauterine gestation in a woman with a pregnancy of unknown location — can prompt interventions that damage a pregnancy that might have had a normal outcome. Recent research has shown the need to adopt more stringent criteria for the diagnosis of nonviability in order to minimize or avoid false
positive test results. The guidelines presented here, if promulgated widely to practitioners in the various specialties involved in the diagnosis and management of problems in early pregnancy, would improve patient care and reduce the risk of inadvertent harm to potentially normal pregnancies.

This entry was posted in First Trimester Pregnancy, New England Journal Of Medicine, Obstetrics and Gynecology. Bookmark the permalink.