The flow chart below is from the above ACOG guideline. 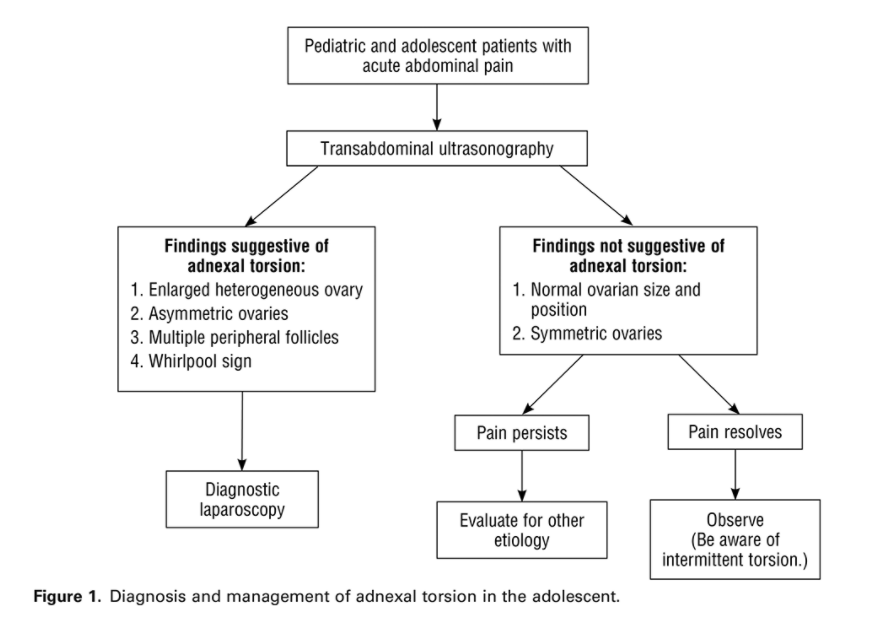 In this post, I link to and excerpt from PedsCases’ Approach to Adnexal Torsion in Children and Adolescents, by Damian.Feldman-Kiss Jul 15, 2021:

This podcast presents an approach to adnexal torsion in children and adolescents. In this episode, listeners will learn about the anatomy, pathophysiology, diagnosis, and treatment of torsion. The podcast was developed by Damian Feldman-Kiss in collaboration with Dr. Jason Wale, an Emergency Physician in Victoria and Clinical Assistant Professor at UBC.

All that follows is from the script.

“17-year-old female with a 2-hour history of sudden-onset of severe RLQ abdominal pain associated with nausea, vomiting, and presyncope. No vaginal or urinary symptoms.”

Adnexal torsion is the partial or complete rotation of normal and/or abnormal structures of the uterine adnexa on the vascular pedicle leading to impaired blood flow. The uterine
adnexa contains the ovaries, uterine tubes, and supporting structures.

Torsion is the fifth most common gynecologic emergency.

Children, adolescents, and young adult females are most commonly affected.

Females older than 10 have an increased risk due to pubertal
changes that result in an increased frequency of physiologic and pathologic pelvic masses compared to prepubescent females. These masses become a concerning risk factor for torsion when they exceed 5 cm.

The risk factors for developing torsion can be broadly understood as changes from normal pelvic anatomy. However, these changes are not necessary, and torsion can develop from completely normal anatomy. Risk factors for torsion in pediatrics include adnexal masses, ligamentous differences, a relatively small uterus, tubal pathology, and a history of torsion.

● An adnexal mass is found in the majority of adult cases. However, pediatric cases are actually free from pathologic structures in up to 50% of confirmed cases. When abnormal structures are found, benign functional ovarian cysts (25%) and benign teratomas (30%) are the most common. Malignant lesions are rare and found in up to 6% of pediatric cases.

Torsion most commonly presents as sudden onset, severe, unilateral lower abdominal pain that is stabbing or sharp, intermittent, and non-radiating. Recall that the right adnexa is more commonly affected than the left. Therefore, lower abdominal painlocalizes to the RLQ more often than the left. The intermittency of the pain is thought to be related to repetitive sequences of partial adnexal rotation and spontaneous reversal.
However, abating pain after a course of severe discomfort can suggest death of the ovary. Intermittent abdominal pain over the preceding few months is also often noted on history.

Torsion tends to be associated with severe nausea, vomiting, and presyncope. These features are caused by direct vagal nerve stimulation. Nausea and vomiting more often occur in premenarchal patients. Importantly, nausea and vomiting are more commonly reported in pediatric and adolescent patients with torsion than with an ovarian cyst alone. Exertion preceding the onset of the pain might also be described on history.

On physical exam, the patient could be febrile, but this is a rare and late finding as fever is due to necrotic adnexal tissue. Tachycardia may also be noted, and patients can appear pale. Abdominal tenderness is present in the vast majority of cases with the most tender location frequently localizing to the RLQ. This can lead to some mimicry of appendicitis; however, rebound tenderness and peritoneal signs are much less common
in torsion. Depending on the extent of the swelling, an adnexal mass may also be palpable. That being said, a bimanual examination is generally not appropriate in pediatric patients.

Importantly, the clinical features of torsion are non-specific, and it can mimic other pathologies. Therefore, it is crucial to rule out other possible diagnoses with a solid workup. The differential of acute abdominal pain is broad and depends on many factors, including age, sex, and the ability to be pregnant. Key diagnoses to rule out when ovarian torsion is being considered in the pediatric female include, but are not limited to,
ectopic pregnancy, appendicitis, PID, ovarian cyst, and urolithiasis. The most critical of which are ectopic pregnancy and appendicitis. It is beyond the scope of this podcast to
review each of these diagnoses in detail. However, we will go over brief descriptions of each and a few discriminating features to help differentiate them from torsion.

● Ectopic pregnancy presents on a spectrum from relatively minor and diffuse abdominal pain to sudden onset, unilateral, severe abdominal pain with possible
referred pain to the upper abdomen or shoulder. This referred pain results from rupture of the ectopic leading to hemoperitoneum and irritation of the diaphragm. Hemoperitoneum may also cause hypotension and relative bradycardia due to vagal stimulation. Discriminating features include vaginal bleeding and amenorrhea.
● Appendicitis classically presents as a gradual onset of abdominal pain that begins in the periumbilical and/or epigastric regions and then localizes to the RLQ as
peritoneal irritation occurs. Discriminating features of appendicitis include rebound tenderness, guarding, and rigidity.
● PID is commonly asymptomatic. Even when symptomatic, patients may have subtle or nonspecific symptoms. Discriminating features include fever, cervical
motion tenderness, and mucopurulent cervical discharge.
● Ovarian cysts are an excellent mimicker of both ovarian torsion and appendicitis. They present as sudden onset, unilateral, lower abdominal pain that may be associated with nausea and vomiting. Discriminating features of ovarian cysts include constant or progressive pain (i.e., not intermittent pain as can be the case in torsion) and less severe pain, nausea, and vomiting than in torsion.
● Urolithiasis presents as a sudden onset of sharp, episodic, severe pain that typically originates in the flank and radiates around the lower abdomen. However,
the localization of the pain depends on the location of the stone. Discriminating features of urolithiasis include the pattern of radiation, dysuria, and hematuria. In fact, up to 30% of children have only painless hematuria.

. . . , let’s discuss the use of laboratory investigations and
imaging in the workup of torsion.

Common labs that are ordered in the ED, such as β-hCG, CBC, and c-reactive protein (CRP), are neither sensitive nor specific for torsion. However, these tests can be helpful in the workup of acute abdominal pain in a young female. For example, what is the first and most important test to order in a female of reproductive age presenting with abdominal pain? The answer is, of course, β-hCG (also referred to as a ‘beta’). A negative beta will rule out pregnancy, and, more critically, an ectopic pregnancy, but it will give no direct information on the likelihood of torsion. Furthermore, an elevated white blood cell (WBC) count and CRP might be present in torsion, but neither test is sensitive or specific. In fact, an elevated WBC count and CRP are actually more suggestive of appendicitis.

Imaging, on the other hand, is more helpful. The imaging modality of choice in the workup of torsion is transabdominal ultrasonography (TAU). It is both highly sensitive and specific, at 92% and 96%, respectively. Transvaginal ultrasonography might be even better, but it is often not appropriate in pediatric patients. Findings on TAU that are suggestive of ovarian torsion include the following:

There has been some controversy about the utility of Doppler ultrasonography in the workup of torsion. Overall, it has a low sensitivity and is of limited value.

CT and MRI are also used in the emergent workup of abdominal pain, and findings in these imaging modalities may also be suggestive of torsion. Nevertheless, if CT or MRI suggest torsion, consulting gynecology and arranging emergent surgery should not be delayed for TAU. Findings on CT that are suggestive of torsion include the following:

● asymmetric ovarian enlargement
● uterine deviation toward the abnormal side
● free fluid in the pelvis, and
● fat stranding, which is an increase in the attenuation or brightness of adipose tissue, adjacent to the ovary

Findings on MRI that are suggestive of torsion include the following:

Although imaging can be helpful, the definitive diagnosis of torsion is surgical. The preferred surgical approach is diagnostic laparoscopy because it is minimally invasive.

The recommended treatment of torsion is prompt laparoscopic detorsion (i.e., untwisting) with or without concomitant cystectomy (i.e., cyst removal).

Prompt detorsion minimizes adnexal trauma and ischemia and, when performed under 24 hours of symptom onset, results in decreased oophorectomy and/or salpingectomy. Given this window, if a patient is diagnosed with torsion by imaging in the middle of the night,
surgery need not happen immediately, but can wait until morning. A similar principle applies to ordering the TAU discussed earlier. If your institution does not have ultrasound technologists available 24/7, a TAU could also wait until morning.

Control of pain and nausea is an important part of management. In the ED, pain could be controlled with ketorolac—if the patient is not pregnant—morphine, or fentanyl. Nausea could be relieved with ondansetron. Post-op pain control could be achieved with detorsion itself, NSAIDs, and a short course of opioids.

This entry was posted in PedsCases Podcasts. Bookmark the permalink.