Google+ Links To And Excerpts From "Sonographic diagnosis of pneumothorax." - Tom Wade MD

Links To And Excerpts From “Sonographic diagnosis of pneumothorax.”

The above article has been cited by 16 PubMed Central articles.

Here are excerpts from the article:

A pneumothorax can be divided into two broad categories: traumatic (including iatrogenic) or atraumatic.

Traumatic pneumothorax, the most common life-threatening outcome in blunt chest trauma, occurs in over 20% of patients with blunt injuries and about 40% with penetrating chest injuries.[2]

Regardless of its presentation, the early detection and treatment of a pneumothorax is critical.

Small- (10% or less) or medium (11 to 40%)-sized pneumothoraces are generally not life-threatening and their management varies.[3–5] However, a delay in the diagnosis and treatment, especially in those who are mechanically ventilated, may lead to the progression of a pneumothorax and resultant hemodynamic instability.[6,7]

Ultrasound has a well-known established role in the diagnosis of a traumatic pneumothorax.

The sensitivity of ultrasound in certain studies has been similar to that found in CT scan, which is still considered to be the gold standard for the detection of a pneumothorax.[11,15]

Lichtenstein et al., have shown that ultrasound has a sensitivity of 95.3% and a specificity of 91.1% for detecting pneumothorax in intensive care unit (ICU) patients.[16] However, in this particular article, the authors cite that the underlying lung process may have affected the accuracy of ultrasound, resulting in both false-positive and false-negative cases.

[The authors of this paper don’t make any specific recommendations on which type and frequency of probe to use for detection (listing essentially all probe types and frequencies. Dr. Lichtenstein in his 2010 article* recommends: “In the BLUE-protocol, we advise a 5-MHz microconvex probe resulting in a small footprint, and a good resolution for both superficial and deep disorders (Fig. 2). This probe also allows satisfactory analysis of the vessels, heart, optic nerves, belly, i.e., whole body analysis, neonate excepted [2].”  Dr. Lichtenstein does note that in some patients the recommended probe will not be optimal.

Returning now to excerpts from Sonographic diagnosis of pneumothorax:

A pneumothorax contains air and no fluid, and therefore, will rise to the least dependent area of the chest.

In a supine patient this area corresponds to the anterior region of the chest at approximately the second to fourth intercostal spaces in the mid-clavicular line. This location will identify the majority of significant pneumothoraces in the supine patient, which makes it the recommended initial area for investigation in a trauma.[17,18]

In contrast, air will accumulate in an apicolateral location in an upright patient.[19]

Based on the above, patients are scanned in a supine or near-to-supine position. The probe should be placed in a sagittal position (indicator pointing cephalad) on the anterior chest wall at about the second intercostal space, in the mid-clavicular line [Figure 1]. 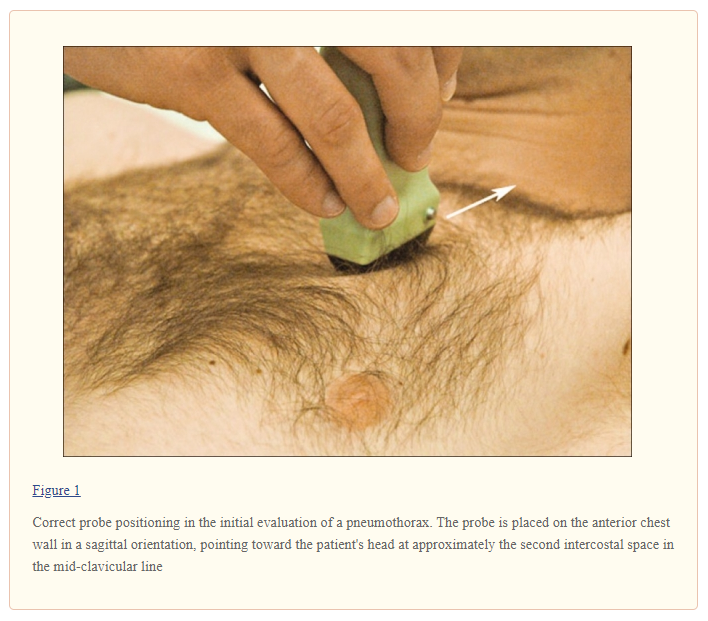 The sonographer should first identify the landmarks of two ribs with posterior shadowing behind them and visualize the pleural line in between them. This is typically called ‘the bat sign’ where the periosteum of the ribs represents the wings and the bright hyperechoic pleural line in between them represents the bats’ body [Figures ​[Figures 2a and 2b].[20] 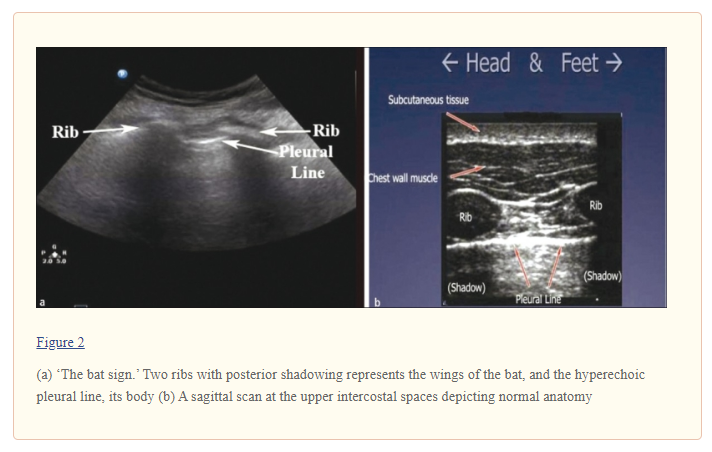 If the ribs are not visualized the probe should be slowly moved in a caudal direction (inferiorly) until two ribs appear on the screen. It is in between these two rib landmarks that the two layers of pleura, parietal and visceral, are seen sliding across one another. As stated earlier, air will rise to the anterior chest wall, and therefore a pneumothorax that is large enough to require a chest tube will appear with this simple technique.

The presence of pleural sliding is the most important finding in normal aerated lung. The sonographer should visualize the hyperechoic pleural line in between two ribs moving or shimmering back and forth. Lung sliding corresponds to the to-and-fro movement of the visceral pleura on the parietal pleura that occurs with respiration. It is a dynamic sign and can be identified on ultrasound as horizontal movement along the pleural line.[21] Sliding is best seen at the lung apex in a supine patient.[21]

The presence of pleural sliding is the most important finding in normal aerated lung. The sonographer should visualize the hyperechoic pleural line in between two ribs moving or shimmering back and forth. Lung sliding corresponds to the to-and-fro movement of the visceral pleura on the parietal pleura that occurs with respiration. It is a dynamic sign and can be identified on ultrasound as horizontal movement along the pleural line.[21] Sliding is best seen at the lung apex in a supine patient.[21]

The use of M-mode, which detects motion over time, provides more evidence that the pleural line is sliding. It is beneficial in patients where sliding may be subtle, such as, in the elderly or in patients with poor pulmonary reserve, who are not taking large breaths.

The M-mode cursor is placed over the pleural line and two different patterns are displayed on the screen: The motionless portion of the chest above the pleural line creates horizontal ‘waves,’ and the sliding below the pleural line creates a granular pattern, the ‘sand’ [Figure 3]. The resultant picture is one that resembles waves crashing in onto the sand and is therefore called the ‘seashore sign’ and is present in normal lung.[13,22,23] 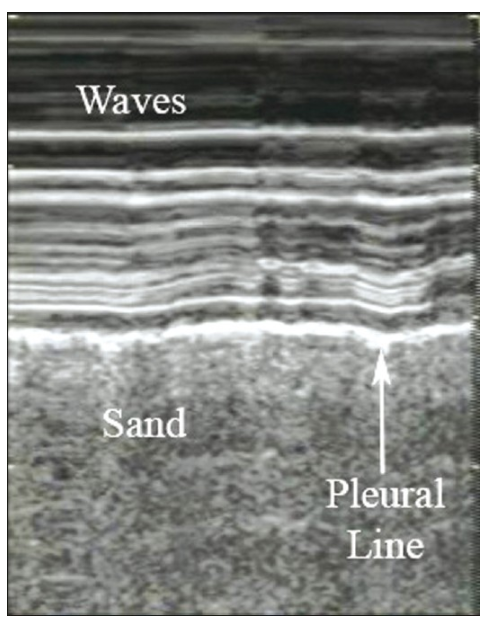 Figure 3
M-mode illustrating the ‘seashore sign.’ The pleural line divides the image in half: The motionless portion above the pleural line creates horizontal ‘waves,’ and the sliding line below it creates granular pattern, the ‘sand’

‘B-lines’ or ‘comet-tail artifacts’ are reverberation artifacts that appear as hyperechoic vertical lines that extend from the pleura to the edge of the screen without fading [Figure 4]. 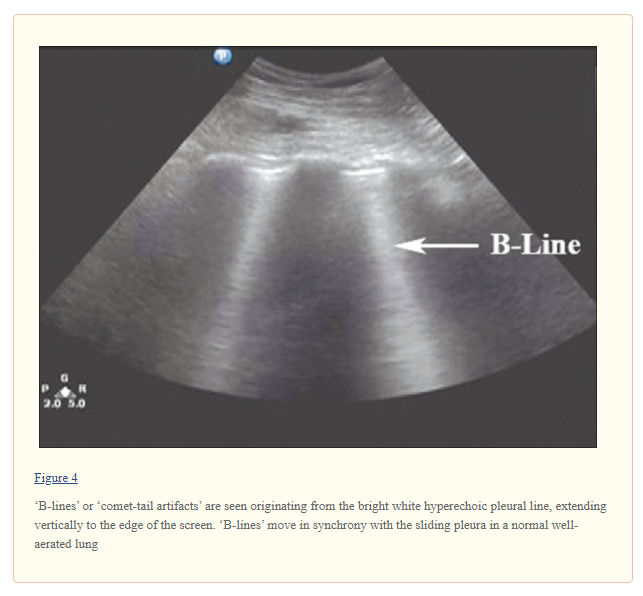 ‘Comet-tail artifacts’ move synchronously with lung sliding and respiratory movements.[21] A few visualized ‘B-lines’ in dependent regions are expected in normal aerated lung and are visualized moving along with the sliding pleura. These artifacts are seen in normal lung due to the acoustic impedance differences between water and air.[22] Excessive ‘B-lines’, especially in the anterior lung, are abnormal and are usually indicative of interstitial edema.*

*  To clarify the above I’ve added the following on B-lines from Dr. Lichtenstein’s 2017 article, Novel approaches to ultrasonography of the lung and pleural space: where are we now? [PubMed Abstract] [Full Text HTML] [Full Text PDF]. By Daniel Lichtenstein.* Breathe (Sheff). 2017 Jun;13(2):100-111: 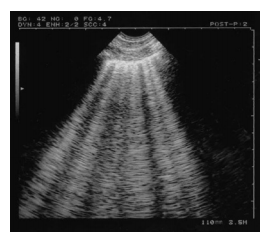 Figure 6 Interstitial syndrome and lung rockets. This figure presents most of the criteria of the B-line (the elementary sign). The B-line is defined using seven criteria, three
of which are always present: a comet-tail artefact; arising
from the pleural line; moving in concert with lung sliding
(when lung sliding is present). The other four criteria are
almost always present: long; well-defined; erasing A-lines;
hyperechoic. This definition works in all situations and
avoids confusion with other comet-tail artefacts that are
not B-lines. The resulting sign, lung rockets, indicates that
more than two B-lines are visible between two ribs. Three
or four B-lines make the pattern called septal rockets and
correlate with Kerley’s lines (subpleural interlobular septa).
Five or more (the maximum seems to be 10) make a pattern
called ground-glass rockets, as they correlate with ground glass lesions. It is easy to count here six B-lines, a pattern correlating with ground-glass lesions on computed tomography.* Lung rockets indicate interstitial syndrome.

*For the significance of ground glass lesions on computed tomography, please see:

Returning now to the excerpts from Sonographic diagnosis of pneumothrorax:

In a pneumothorax, there is air present that separates the visceral and parietal pleura and prevents visualization of the visceral pleura. In this situation, lung sliding is absent. This lack of lung sliding can be visualized by identifying the landmarks discussed earlier. Two ribs should be identified with the pleural line in between them. The typical to-and-fro movement or shimmering of the pleural line will not be present. The same technique using M-mode can be used to confirm a lack of sliding. The resultant M-mode tracing in a pneumothorax will only display one pattern of parallel horizontal lines above and below the pleural line, exemplifying the lack of movement. This pattern resembles a ‘barcode’ and is often called the ‘stratosphere sign’ [Figure 5].[22,23] 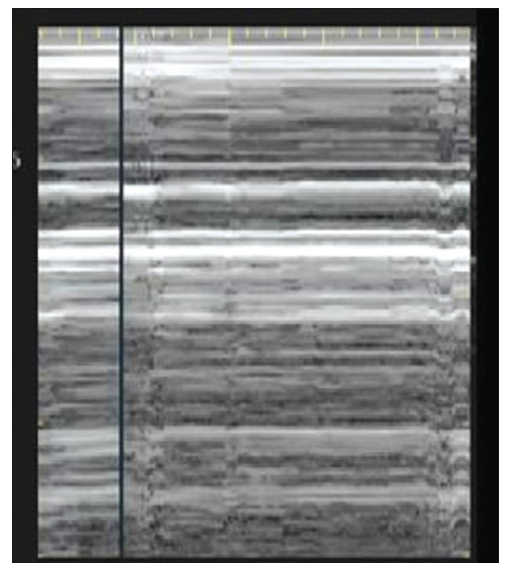 Figure 5: M-mode and the absence of lung sliding are shown as the ‘stratosphere sign’: Parallel horizontal lines above and below the pleural line, resemble a ‘barcode.’ This sign indicates a pneumothorax at this intercoastal space.

The negative predictive value for lung sliding is reported as 99.2–100%, indicating that the presence of sliding effectively rules out a pneumothorax.[11,16,24]

However, the absence of lung sliding does not necessarily indicate that a pneumothorax is present. Lung sliding is abolished in a variety of conditions other than pneumothorax, including acute respiratory distress syndrome (ARDS), pulmonary fibrosis, large consolidations, pleural adhesions, atelectasis, right mainstem intubation, and phrenic nerve paralysis.[21,25,26]

Although the absence of lung sliding is not specific for pneumothorax , the combination of this with other signs improves the accuracy of the diagnosis.

Ultrasound demonstrates the loss of ‘comet-tail artifacts’ in patients with a pneumothorax. These reverberation artifacts are lost due to air accumulating within the pleural space, which hinders the propagation of sound waves and eliminates the acoustic impedance gradient.[20] In addition, ‘comet-tail’ artifacts are generated by the visceral pleura, which is not visualized in a pneumothorax, therefore, these artifacts are not generated.[24] The negative predictive value for this artifact is high, reported at 98–100%, such that visualization of even one comet-tail essentially rules out the diagnosis of a pneumothorax.[21,24,27]

‘A-lines’ are another important thoracic artifacts that can help in the diagnosis of a pneumothorax. These are also reverberation artifacts appearing as equally spaced repetitive horizontal hyperechoic lines reflecting off of the pleura [Figure 6]. 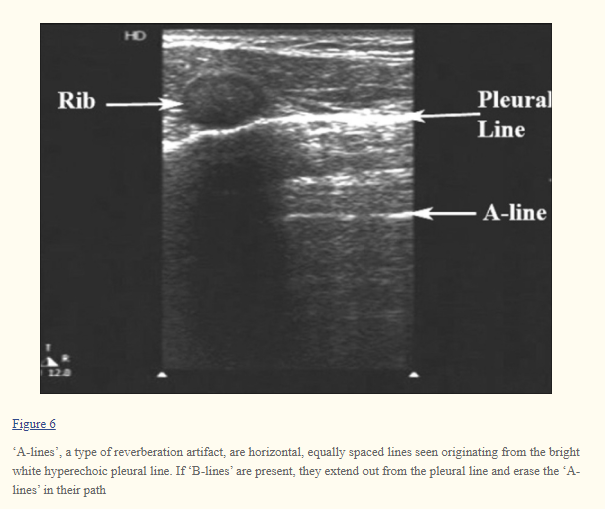 The space in between each A-line corresponds to the same distance between the skin surface and the parietal pleura. In the normal patient, when ‘B-lines’ are present, they extend from the pleural line and erase ‘A-lines’, as they emanate out to the edge of the screen. ‘A-lines’ will be present in a patient with a pneumothorax, but ‘B-lines’ will not. If lung sliding is absent with the presence of ‘A-lines’, the sensitivity and specificity for an occult pneumothorax is as high as 95 and 94%, respectively.[24]