In this post I link to and excerpt from The Clinical Utility of a Positive Antinuclear Antibody Test Result [PubMed Abstract] [Full Text HTML] [Full Text PDF]. Reumatologia. 2018;56(4):243-248.

Here are the excerpts: 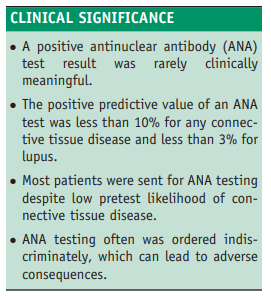 Our goal was to evaluate the clinical utility of the positive
ANA test result in a real-world setting, in a purely outpatient population referred by a heterogeneous group of medical providers (who used a heterogeneous group of testing
centers). To do so, we determined the final diagnoses of
patients who were referred to a tertiary rheumatology clinic
for evaluation of a positive ANA test result and reviewed
these outcomes in the context of descriptive data as to why
testing was ordered by the referring physicians. To our
knowledge, ours is the first study to investigate the positive
predictive value of ANA testing in a cohort of adult patients
referred to a rheumatology center specifically for a positive
ANA test result. Our results indicate that ANA testing
outside the rheumatology setting is often inappropriately
ordered and interpreted, and that in clinical practice, the test
has a poor positive predictive value for diagnosing connective tissue disease in general, and lupus in particular.

We retrospectively reviewed the records for all consultations
presenting to the authors at the University of Connecticut
Health Center rheumatology clinic between July 2007 and July 2009. Patients were included in the evaluation if they had been referred for subspecialty evaluation of a recently ordered positive ANA test result.

* These are the definitions of positive and negative predictive value from the online module linked below from Boston University School of Public Health.

If you are interested in more detail, here are links to the online module from Boston University School Of Public Health that discusses:

Positive predictive values for a “positive ANA test result” were further evaluated after stratification according to titer, as well as according to clinically relevant key patient characteristics, including age (younger [≤65 years] vs older patients), gender, setting where the ANA test was drawn (categorized as those who had ANA testing performed within our academic medical center vs testing elsewhere), and characteristics of the referring provider (academic vs community-based, primary care physician vs specialist). Subsequently, sensitivity analysis was performed using different cutoff values to define a positive test.

Of 1306 consultation visits over the 2-year period, 227
patients (17.4%) had been referred for a positive ANA
of 1:40 performed via indirect fluorescent assay, and an
additional 5 patients had been referred for a positive antinuclear antibody screening test result without an associated
titer performed. All ANA tests and referrals were ordered by
nonrheumatologists. There were a total of 138 referring
providers, of whom more than 80% (112/138) were primary
care practitioners (internal medicine, family practice, pediatrics, and obstetrics-gynecology). Correspondingly, 85%
of the referrals came from primary care providers (197/232).
The breakdown of specialists in the referral base was as
follows: dermatology (3), orthopedic surgery (4), pulmonary (4), physiatry (2), neurology (4), ophthalmology (2),
gastroenterology (3), hematology (2), infectious disease (1),
and endocrinology (1).

Among the 232 patients with a positive ANA test result,
extensive rheumatologic evaluation revealed an antinuclear
antibody-associated rheumatic disease in 21 individuals (including 1 of the 5 who had a positive ANA screen without
a reported titer). By using a cutoff titer for test positivity
of 1:40 (and excluding the patient with no titer performed
in this analysis), the positive predictive value of an antinuclear antibody so obtained was 8.8% for any antinuclear
antibody-associated rheumatic disease (Table 1).

The specific breakdown of antinuclear antibody-associated rheumatic diseases diagnosed in this cohort is listed in Table 2 by ANA titer. 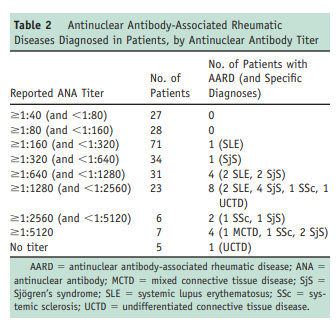 Although the prevalence of clinically unimportant positive ANA test results reportedly is increased in older populations,11-13 the positive predictive value of a positive ANA test result was not greater among the younger patients in our cohort. By using < 65 years of age as a cutoff separating younger from older subjects (Table 3), 17 of 192 patients in the younger subgroup had an antinuclear antibody-associated rheumatic disease (positive predictive value 8.9%) versus 4 of 40 subjects in the older group (positive predictive value 10%). A majority of subjects were female (195 women vs 37 men), but we found no gender difference in the rate of true disease (8.1% [3/37] vs
9.2% [18/195]). 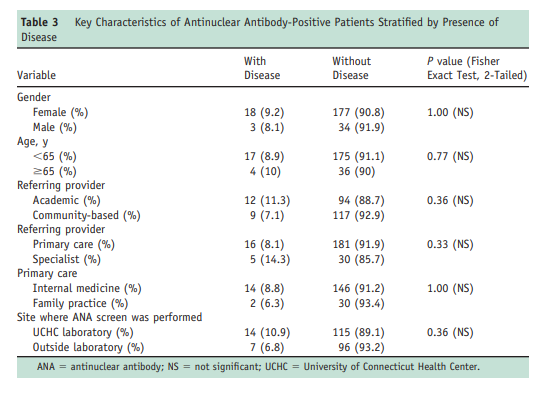 A total of 23 of 232 patients had a non-antinuclear
antibody-associated inflammatory or autoimmune rheumatic disease (9.9%), including 8 with rheumatoid arthritis. Of the remaining 15 patients with a non-antinuclear antibody-associated rheumatic disease, 3 had gout; 6 had polymyalgia rheumatica or giant cell arteritis; 4 had psoriatic
arthritis or ankylosing spondylitis; 1 had antineutrophil cytoplasmic antibody-associated vasculitis; and 1 had pseudogout. A total of 28 patients were found to have antithyroid
antibodies (microsomal or thyroglobulin antibodies); of
these, 4 were previously known to have clinical hypothyroidism, and 1 was diagnosed with hypothyroidism at the time of consultation. Of the 232 patients in this cohort, only 91 patients were tested for antithyroid antibodies, and of these, 28 patients (30.8%) had positive test results.

The most common reason for ANA testing was widespread pain (Table 4). Fifty-four of 232 patients (23%) had ANA testing performed for this chief symptom, none of whom had a rheumatologic disease. Of these 54 patients, 46 were subsequently diagnosed with fibromyalgia. Other common reasons for obtaining an ANA and consequently being referred are noted in Table 4 and included knee pain, chronic lower back pain, chronic headaches, and unilateral hip pain. Table 4 includes both the original reasons for ANA testing and the ultimate diagnoses made in the course of consultation. 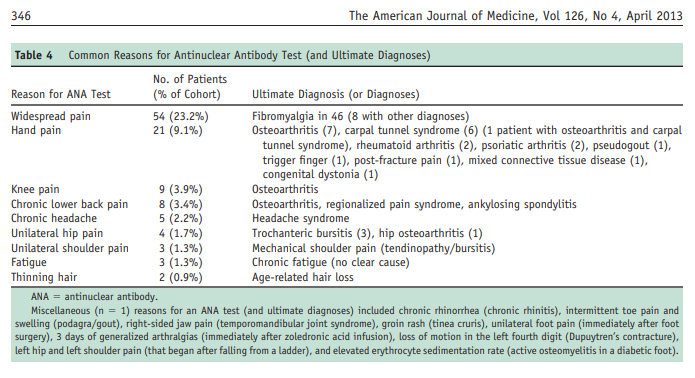 Our study suggest that a positive ANA test result obtained
outside of the rheumatologic setting is poorly predictive of an
antinuclear antibody-associated rheumatic disease, even when
using a high-titer value (640) as a cutoff.

Multiple studies show ANA positivity to be highly prevalent in both the general and various patient populations. In a Belgian study by Verstegen et al,14 42.6% of 6422 consecutively tested patients at a large community hospital were ANA-positive (1:80), and Marin et al15 demonstrated the prevalence of ANA positivity (1:40) in a group of 304 healthy individuals to be 54.3%. Fernandez et al16 demonstrated ANA positivity in 22.6% of normal blood donors (antinuclear antibody 1:40), and Peene et al17 found that 23.5% of 10,550 consecutive patients referred for ANA testing at a single medical center had a positive result
(in a titer of 1:40).

With such a high positivity rate in the general population,
our study confirms that the ANA test can be problematic
when not appropriately applied.

As basic statistical principles would predict, a test that is positive in approximately half of the population results in an unacceptably high rate of false positivity—and a poor positive predictive value—when ordered in the face of relatively low pretest probability. Our results are in agreement with previous studies indicating that the antinuclear antibody test is most appropriately ordered in settings where the pretest probability of antinuclear antibody-associated disease is high.15,20 However, our study further shows that antinuclear antibody
testing is frequently ordered in settings where the pretest
likelihood is low.

Moreover, overuse of the ANA test and the consequent
false-positives that result often fuel further follow-up testing, patient anxiety, and even misdiagnosis and inappropriate treatment.20