Google+ Links To And Excerpts From The First Part-The Basics-Of Dr. Lichtenstein's Article On How To Perform Lung Ultrasound In The Critically Ill With Additional Resources - Tom Wade MD

Links To And Excerpts From The First Part-The Basics-Of Dr. Lichtenstein’s Article On How To Perform Lung Ultrasound In The Critically Ill With Additional Resources

Here is the resource I’ve added today along with excerpts:

This post, is the first part of Dr. Lichtenstein’s article. This part of his article covers the basics of lung ultrasound.

The next post covers the second half of the doctor’s article and cover the clinical applications of lung ultrasound.

Dr. Lichtenstein’s article is simply outstanding. It is the best clearest introduction and review of lung ultrasound that I’ve found.

His article is the resource that all beginners should start with, I think. For instructors of this technique it will help you clarify the important points that beginners often fail to realize.

And for experienced lung sonographers, it is an awesome resource.  It reinforces the critical details that are required to get the most out of lung ultrasound scanning.

The tools for practicing LUCI (Lung Ultrasound In The Critically Ill)

The development of the tools for LUCI is the main change in the field in recent years. Previously, we had been using a 1982 technology (the ADR-4000) to develop, since 1989 (after underground years from 1984), critical care ultrasound, including of the lung. We still use everyday a 1992 Japanese
technology (the latest update, being purely cosmetic, in 2008).

CEURF* has defined seven criteria that an ultrasound machine must meet for you to be able to face the worst (i.e. cardiac arrest). Fortunately, the same equipment and approach are also perfect for other applications, from inserting a central venous
line to checking bladder emptying, etc.). Although a given ultrasound machine may not necessarily meet all of our criteria, the more criteria your equipment does meet, the better prepared you will be for the greatest range of applications.

*This link is to the home page of CEURF (The Circle of Emergency and Resuscitation Echographists Francophones) which contains links to many outstanding ultrasound resources. Both beginners and experienced ultrasound clinicians should explore this site.

And here are links to Dr. Lichtenstein’s YouTube videos:

HandsOnEcho has a number of useful downloadable resources on ultrasound applicable to:

We find many modern machines often make performing lung ultrasound a bit difficult, despite being accustomed to using them in many workshops.

We advise carefully deleting useless and deleterious filters, and bypassing all of them.

I advise using the abdominal probe first, acknowledging also
that it can rapidly becoming limiting (in posterior areas, in areas of difficult access, due to the need for a superficial resolution, etc.).

However, we are glad to see that, increasingly since very recently, some manufacturers have begun to build machines
with real simplicity. “Intelligent” machines are little by little elegantly competing with these laptops full of buttons and dust (and microbes), with endless start-up times, large widths, opaque algorithms, high cost, etc.

The seven principles of LUCI

The seven principles of LUCI have not changed since
2001 [6], apart from a slight update to principle 7

The technical approach to a critically ill patient

We must first define the areas of investigation. Those we use in an emergency comprise three strictly defined points, although LUCI principle 7 allows a certain flexibility. These BLUE points are defined by applying one’s hands to the patient’s thorax, in
order to make finding the ultrasonographic field easier (figure 1). 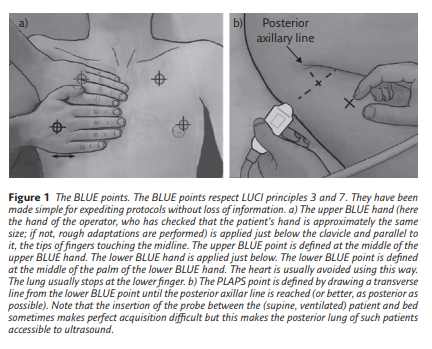 In critical settings, movement comes from the lung, the chest wall (severe dyspnoea) and the whole body of critically ill, anxious patients. The physician should not add their own movement and should hold the probe gently but firmly in order to be able to understand the dynamics of lung ultrasound. Severe dyspnoea generates contractions of the accessory
muscles, in which case, some expertise is required, although the procedure is made easier by using a standardised analysis, mostly using the M-mode (describing Keye’s sign; the Avicenne sign would be too long in the given volume).

The main signatures seen in the critically ill

Considering the way LUCI is sometimes described and taught, we will take the opportunity here to remind you of the definitions of the disorders. Our training centre aims to explain our choice (of equipment, probe and signatures) with the result
of demonstrating that all confusion, which is still frequent in this field, can be avoided because LUCI as taught by CEURF is completely standardised.

There is no room for confusion in LUCI. Often, lectures
on lung ultrasound deal with pleural effusion, lung consolidation, and more rarely, interstitial syndrome and pneumothorax, but the normal pattern is rarely described. A brief description of the normal lung surface is critical, since it is seen in various diseases. 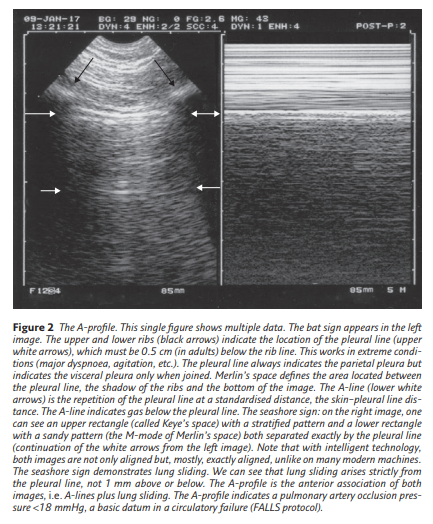 Pleural effusion is clearly defined using the concept of the lung line, a regular line roughly parallel to the pleural line. At CEURF, no tone (hypo- or hyperechoic) is needed, which is an advantage because then only anechoic effusions appear
anechoic (if the pleural effusion was defined as an anechoic collection, the most life-threatening cases would not be diagnosed) (figure 3). 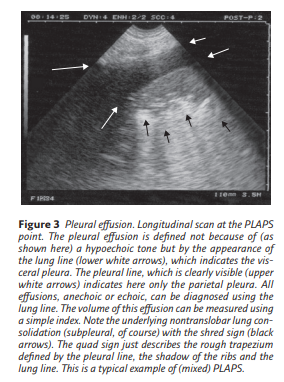 The shred sign (or fractal sign) is of value for immediately diagnosing nontranslobar cases of lung consolidation, which are the most frequent (figure 4). 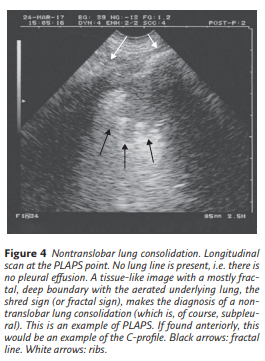 The term “subpleural” is useless in the world of LUCI: each time a consolidation is seen using ultrasound, whether it is minute or huge, it is subpleural. We would guess that those who use this term mean “small” consolidations, so we would advise the term “small” be used instead of “subpleural”. In translobar cases, no shred sign can be seen and the image observed is a whole anatomical lung with a tissue-like pattern that one may call, temporarily, the lung sign (figure 5). 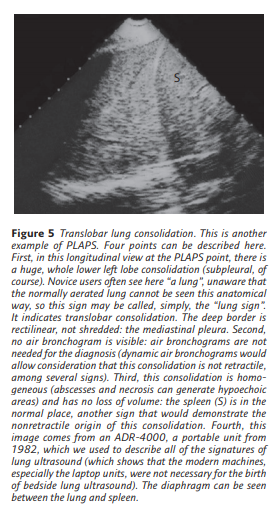 Posterolateral alveolar and/or pleural syndrome (PLAPS) [And The PLAPS Point*]

The notion of posterolateral alveolar and/or pleural syndrome (PLAPS) has great relevance in the BLUE protocol. At the PLAPS point, the detection of an alveolar, pleural, mixed or even ill-defined but otherwise structural image is called a PLAPS
(figures 3–5). This can simplify the use of LUCI,
especially in difficult (bariatric) patients, since the
distinction does not impact the accuracy of the BLUE
protocol (subtle distinctions should be made once
the BLUE protocol is perfectly mastered, not before).

Using the PLAPS point, very posterior disorders can be detected, which is better, of course, than with lateral views that are sometimes advised. Note that abdominal probes have a limited ergonomy, and the cardiac probes a limited resolution for the analysis of PLAPS in supine patients.

Here I repeat figures 3 through 5 from earlier in the article for ease of review.

Using the PLAPS point, very posterior disorders can be detected, which is better, of course, than with lateral views that are sometimes advised. Note that abdominal probes have a limited ergonomy, and the cardiac probes a limited resolution for the analysis of PLAPS in supine patients.

Interstitial syndrome is clearly defined when more than two B-lines are visible between two ribs. We propose a hierarchy of  signs that allows universal definition (figure 6). Using this standardised definition, comet-tail artefacts such as the E-line
(seen in the case of parietal emphysema) or Z-line (interference) will not be confused with B-lines. We would like to add that the expression “more than three B-lines” makes no sense for diagnosis. 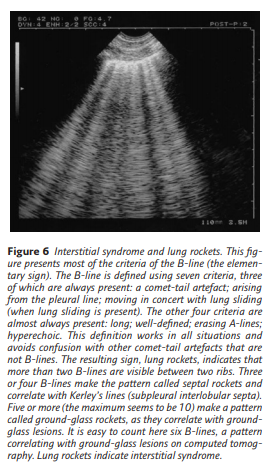 Little has changed in the ultrasonographic diagnosis of pneumothorax. Pneumothorax is still defined by a sequential approach, first recognising the A′-profile (which is anterior, by definition). This A′-profile is constant (figure 7). 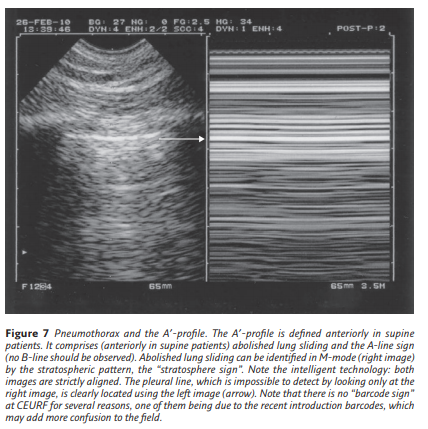 Second, finding a lung point, i.e. extending from the area with the A′-profile laterally until this point is found. The lung point is defined as follows: once, and only once, an A′-profile has been detected, the probe is moved until one finds the sudden appearance of lung signs (lung sliding and B-lines), synchronous with respiration (figure 8) 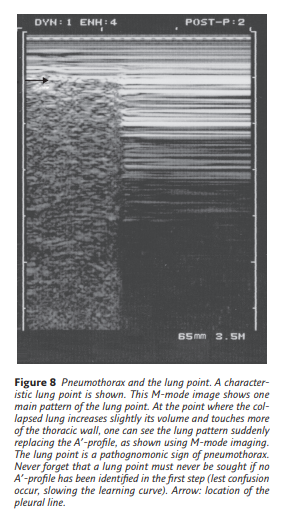