Google+ Links To And Excerpts From The Second Part-Clinical Applications-Of Dr. Lichtenstein's Article On How To Perform Lung Ultrasound In The Critically Ill - Tom Wade MD

Links To And Excerpts From The Second Part-Clinical Applications-Of Dr. Lichtenstein’s Article On How To Perform Lung Ultrasound In The Critically Ill

Today, I’m reviewing and excerpting from the second half of Dr. Lichtenstein’s article in which he covers the clinical applications of Lung Ultrasound.

The first part of my notes on the article is Links To And Excerpts From The First Part-The Basics-Of Dr. Lichtenstein’s Article On How To Perform Lung Ultrasound In The Critically Ill With Additional Resources
Posted on December 1, 2019 by Tom Wade MD

This post reviews the second half of the doctor’s article and cover the clinical applications of lung ultrasound.

Here are the excerpts:

The main clinical applications in the critically ill

Three main protocols are taught at CEURF that summarise the main needs of the critical care physician, i.e. prompt diagnosis of respiratory failure, circulatory failure and cardiac arrest. These are defined below.

The BLUE protocol (figure 9) draws on the experience
of 18 years of use of lung and venous ultrasound
for standardising prompt diagnosis of the cause of
a respiratory failure. The decision tree shows the
six main diseases, which were seen in 97% of the
adult patients seen in our emergency department
and admitted to our ICU. Countless rare diseases
make up the remaining 3%.
Six profiles are defined at the anterior chest wall;
one (the A-profile) giving three subprofiles, making
eight profiles in all. The accuracy of each profile is
presented in table 1.

● The A-profile was described above (figure 2). It
requires a venous analysis (the specific protocol
is too long to describe here). The combination
of the A-profile and a deep venous thrombosis
(DVT), called the A-DVT profile, is associated with
pulmonary embolism.
● The B-profile combines lung sliding with lung
rockets at the four anterior BLUE points. It
is usually associated with haemodynamic
pulmonary oedema.
● The B′-profile combines abolished lung sliding
with diffuse anterior lung rockets. It is associated
with pneumonia.
● The A/B-profile describes a half A-profile in
one lung and a half B-profile in the other. It is
associated with pneumonia.
● The C-profile describes anterior lung
consolidation (regardless of number or size),
typically indicating pneumonia.
● The A-profile with no DVT and with a PLAPS,
called the A-V-PLAPS profile, is associated with
pneumonia.
● The A-profile with no DVT and no PLAPS, called
the nude profile (everything normal) is linked
to chronic obstructive pulmonary disease
exacerbation or asthma.
● The A′-profile combines anterior abolished lung
sliding with exclusive A-lines. It is suggestive
of pneumothorax, a definite diagnosis if a lung
point is also present. 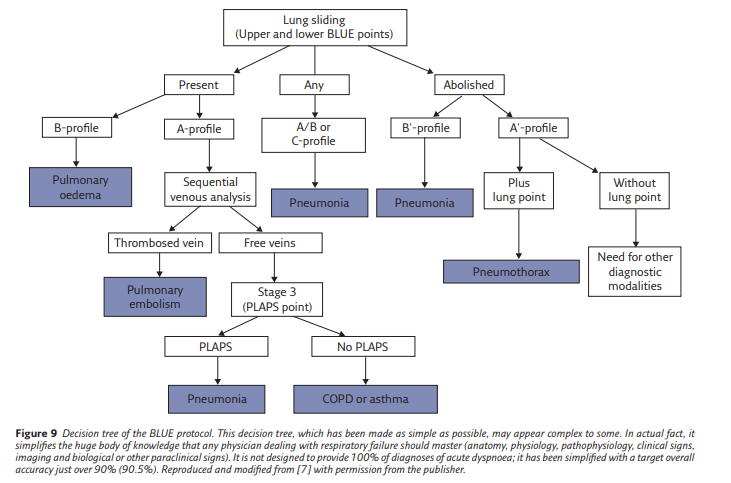 Many subtleties cannot be dealt with here, such as how to diagnose acute respiratory distress syndrome (ARDS) (briefly, the profiles are the same as for pneumonia [8]), how to manage rare diagnoses or multiple diagnoses, how to locate the
heart when following the BLUE protocol (briefly, just after), and does the BLUE protocol work in children or neonates, in wealthy and poor areas of the world (briefly, yes) [5].

CEURF has attracted some attention regarding the terms seen in some of the literature and the use of the word “profile”, such as the B1, B2-profiles. These terms can cause confusion as they do not specify the quality of lung sliding, which is a critical
datum. We use instead the simple and descriptive terms “septal rockets” and “ground-glass rockets” to avoid confusion (and aid memory). There is no confusion in the world of LUCI.

In the absence of a firm gold standard for the
clinical assessment of volaemia, we present here the approach that we propose for the community to work on. Briefly, in a case of circulatory failure of unknown cause, this protocol, which follows Weil’s classification of shock [9], harnesses the potential of lung ultrasound. Simple equipment, without Doppler, and the same probe as for the BLUE protocol are suitable. 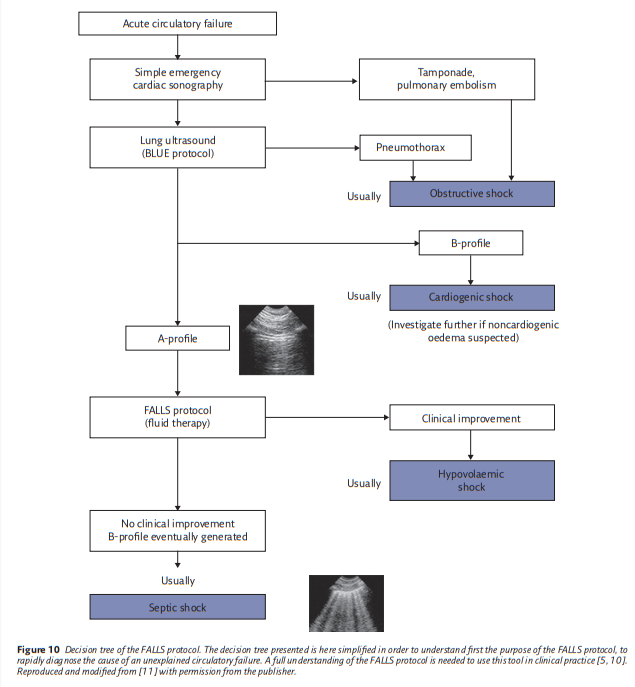 The FALLS (fluid administration limited by lung sonography) protocol(figure 10) begins with a pericardial analysis, followed by a simple evaluation of the right ventricle volume, then a search for a pneumothorax.

If no disorder is found, an obstructive shock is thus rapidly ruled out.

The absence of a B-profile makes the diagnosis of a cardiogenic shock with elevated pressures unlikely; in such cases, the patient usually has an A-profile or something equivalent.

The only remaining causes of shock are hypovolaemic and distributive shock (i.e. usually septic shock in clinical practice).

The question of when to use vasopressors and/or volume in the above two situations is addressed in many posts in this blog and in the FOAM world in general.

The Extended BLUE (E-BLUE) protocol takes the best of the data extracted from history, physical examination, blood tests and other tests (if needed) to improve the accuracy of the BLUE protocol.

Blood gases do not feature in the E-BLUE protocol (this test is painful and the information from it is not critical once a BLUE protocol has been performed).

Thoracocentesis is one tool of the E-BLUE protocol; we must mention here that we do not recommend ultrasound during the puncture (this is of limited interest once the physician knows
where to insert the needle).

Thoracocentesis is one tool of the E-BLUE protocol; we must mention here that we do not recommend ultrasound during the puncture (this is of limited interest once the physician knows
where to insert the needle).

In rare instances, the E-BLUE protocol will ask for tools such as Doppler, expert echocardiography and transoesophageal
echocardiography. In these cases, we simply use the DIAFORA (Doppler intermittently asked from outside in rare applications) approach: we call an expert who comes, during clinic hours, with the sophisticated machine and the three traditional probes.

In short, LUCI is of use in all those disciplines where the physician carries a stethoscope around the neck.

Second, specialties such as cardiology, pulmonology, internal medicine, nephrology, gynaeco-obstetrics, geriatrics, etc. In fact, all disciplines that have to deal with the lung. Neonates and elderly patients benefit from the same approach, without real adaptation, since the signs are universal.

In pulmonology, the puncture of superficial masses is an expert procedure that can be performed during clinic hours and we refer the reader to expert sources [18]*.

*Chest Sonography  [Link is to the PDF] 7-30-2010, European Course Book from EFSUMB (European Federation of Societies for Ultrasound In Medicine and Biology)

What of body habitus? Whether the patient is underweight or bariatric, the lung can be considered a superficial organ. In bariatric patients, the lung can be located confidently using the BLUE points. The anterior profiles of the BLUE protocol can usually be observed. The posterior disorders are more difficult
to assess but the concept of the BLUE points allows precise definition of the boundary between the chest and abdomen (which is usually not well estimated clinically) and the concept of PLAPS allows detection of the presence of any structural image at this level.

LUCI can be performed in both wealthy and resource-scarce countries: the applications developed by CEURF were defined using a simple, easy-to-purchase machine with a single, universal probe, without Doppler or other facilities. That

There are three additional sections in Dr. Lichtenstein’s article that I have not yet reviewed [Link is to the article PDF]: