Google+ Links To And Excerpts From Unintentional weight loss: Clinical characteristics and outcomes in a prospective cohort of 2677 patients - Tom Wade MD

Links To And Excerpts From Unintentional weight loss: Clinical characteristics and outcomes in a prospective cohort of 2677 patients

In this post I link to and excerpt from Unintentional weight loss: Clinical characteristics and outcomes in a prospective cohort of 2677 patients [PubMed Abstract][Full Text HTML][Full Text PDF]. PLoS One. 2017; 12(4): e0175125.

Whereas there are numerous studies on unintentional weight loss (UWL), these have been
limited by small sample sizes, short or variable follow-up, and focus on older patients.
Although some case series have revealed that malignancies escaping early detection and
uncovered subsequently are exceptional, reported follow-ups have been too short or unspecified and necropsies seldom made. Our objective was to examine the etiologies, characteristics, and long-term outcome of UWL in a large cohort of outpatients.

We prospectively enrolled patients referred to an outpatient diagnosis unit for evaluation of
UWL as a dominant or isolated feature of disease. Eligible patients underwent a standard baseline evaluation with laboratory tests and chest X-ray. Patients without identifiable causes 6 months after presentation underwent a systematic follow-up lasting for 60 further months. Subjects aged ≥65 years without initially recognizable causes underwent an oral cavity examination, a videofluoroscopy or swallowing study, and a depression and cognitive assessment.

Overall, 2677 patients (mean age, 64.4 [14.7] years; 51% males) were included. Predominant etiologies were digestive organic disorders (nonmalignant in 17% and malignant in 16%). Psychosocial disorders explained 16% of cases. Oral disorders were second to nonhematologic malignancies as cause of UWL in patients aged ≥65 years. Although 375
(14%) patients were initially diagnosed with unexplained UWL, malignancies were detected
in only 19 (5%) within the first 28 months after referral. Diagnosis was established at autopsy
in 14 cases.

This investigation provides new information on the relevance of follow-up in the long-term clinical outcome of patients with unexplained UWL and on the role of age on this entity. Although unexplained UWL seldom constitutes a short-term medical alert, malignancies may be undetectable until death. Therefore, these patients should be followed up regularly (eg yearly visits) for longer than reported periods, and autopsies pursued when facing unsolved deaths

Baseline evaluation. At first [outpatient] consultation, a consultant internist asked patients
about past and present medical history and performed an exhaustive physical examination.
Attention was paid to clinical presentation, accompanying symptoms, estimated amount of
weight loss (percentage and Kg over the preceding 6–12 months), use of prescribed, over-thecounter and illicit drugs, comorbidities (evaluated with the age-adjusted Charlson index [44,45]), psychosocial issues, and, especially in patients aged ≥65 years, presence of dental pain, dry mouth and difficulty swallowing (herein referred to as oral problems or disorders), cognitive impairment/dementia, and disability/immobility. When there were doubts about the presence of cognitive impairment, a relative/caregiver was asked to provide information.

Further investigations. Other examinations were ordered according to the results of baseline evaluation and assessment of patient outcome during successive visits (eg additional laboratory tests, imaging studies such as abdominal ultrasound, computed tomography and FDG-PET scanning, endoscopies, and biopsy/cytology studies).

Patients aged ≥65 years with unexplained UWL after the first evaluation underwent an examination of the oral cavity. Potential depression and cognitive problems were assessed with the geriatric depression scale (short form) [46] and the Mini-Cognitive Assessment Instrument (Mini-Cog) [47], respectively.

Uncertain difficulty swallowing/dysphagia was evaluated with videofluoroscopy, or, if unfeasible, a swallowing study [48]. The latter is an adaptation of a validated procedure in which subjective bedside assessment of swallowing is combined with concurrent monitoring of oxygen saturation [48,49].

In line with earlier reports [1–3,8,9], albeit with some variation, three main etiologic groups were established: malignancies, nonmalignant organic disorders, and psychosocial disorders. 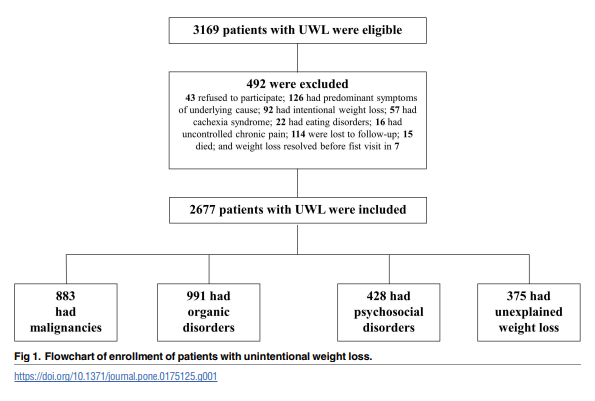 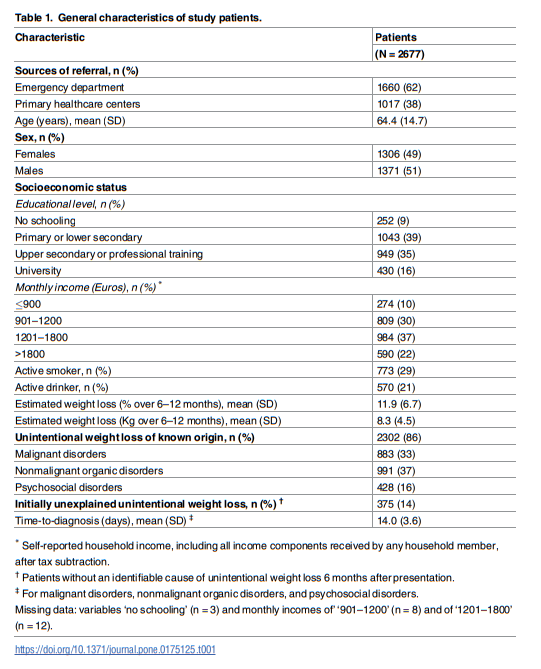 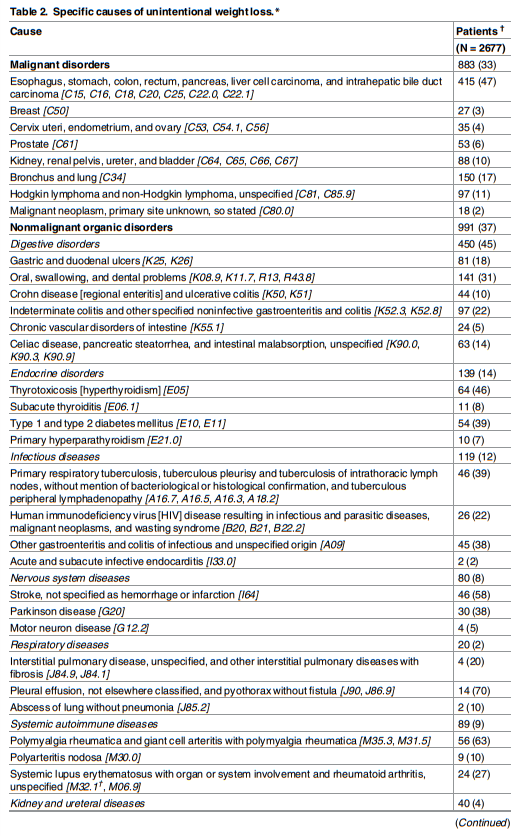 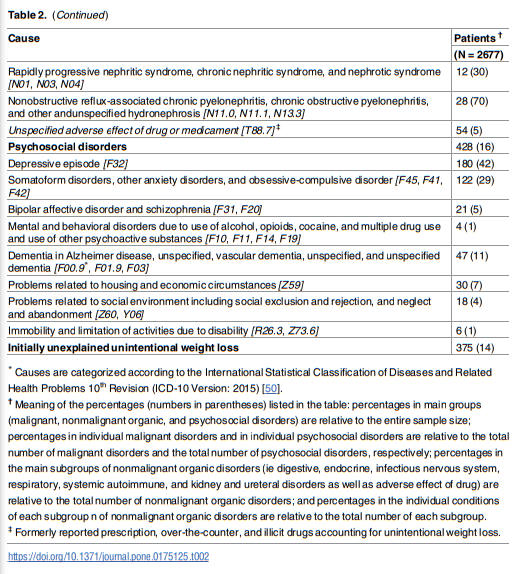 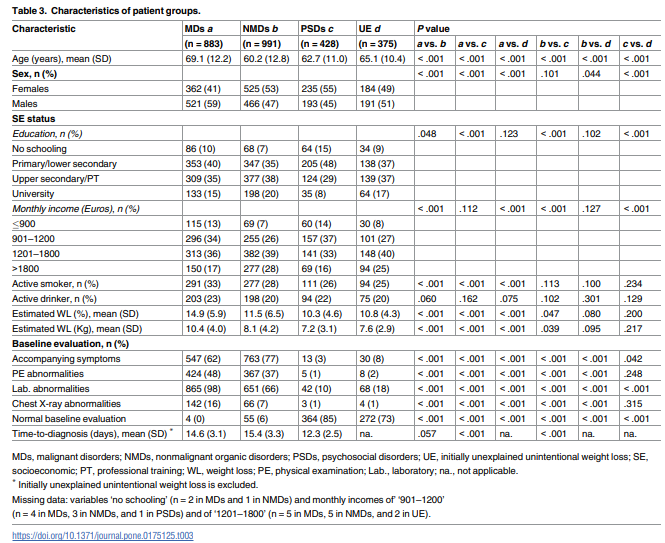 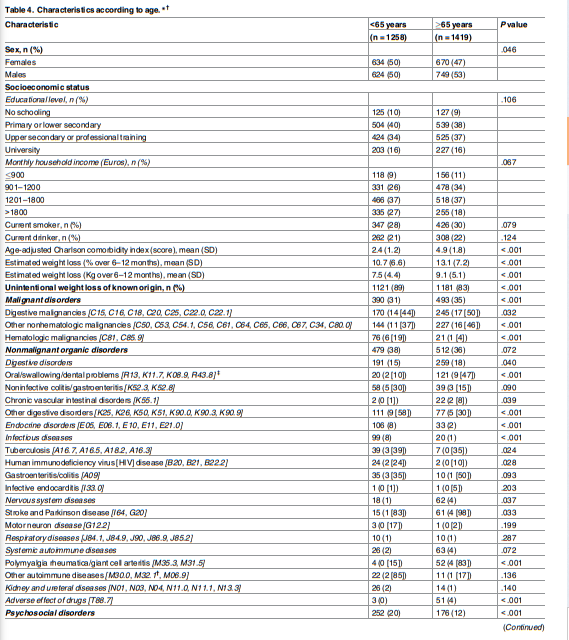 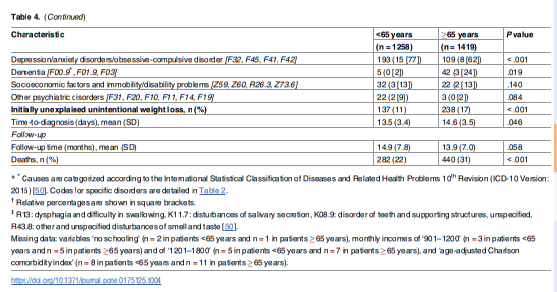 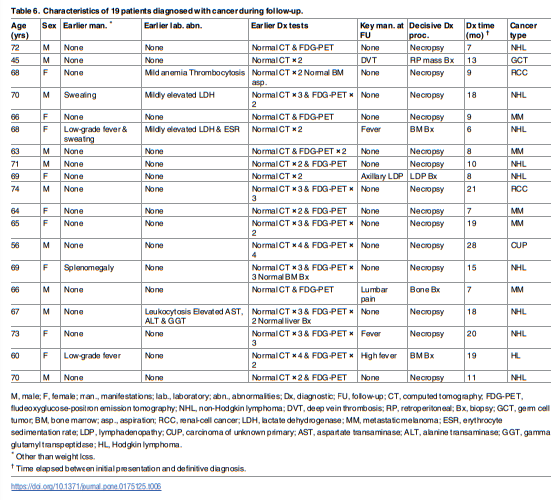 We report here the largest prospective study of patients with UWL. While the main etiologies of UWL agreed in general with previous reports, a salient finding of the study was the long follow-up of patients with a diagnosis of unexplained UWL. During this period, the longest reported up to now, several malignancies were detected in some living and, remarkably, deceased patients at postmortem studies. Additionally, relevant differences were observed between patients aged ≥65 years and those aged <65 years. The sample sizes of the two groups
were large enough to establish solid comparisons, which may help further understand the complex relationship between age and UWL.

With nearly 40% of UWL causes, nonmalignant organic disorders were the most frequent
etiologic group. Consistent with preceding reports [2–4,6,8,9], digestive disorders largely predominated in this group (45%). Of note, oral problems accounted for more digestive causes of
UWL than any other digestive condition—a factor linked to patient age (see below). Malignancies were identified in one third of UWL patients and, also in line with reported evidence, digestive malignancies prevailed (47%) [2,3,9,19], with pancreatic cancer comprising almost 20% of all malignancies. As expected [3,9], cancer patients were older, more often male, and had more pronounced weight loss than other patients. While psychosocial disorders (principally depression) explained UWL in 16% of patients, an initial cause was not identified in 14%.

Although UWL has been extensively investigated in elders [1,10,11,15–18], studies have not
explicitly analyzed the differences between older and younger patients. Reports indicate that
15–20% of adults aged ≥65 years have UWL [10,11] and that this prevalence is higher in community dwelling elders (27%) and nursing home residents (50–60%) [51].

Similar to the etiologies irrespective of age, malignancies, nonmalignant organic disorders, and psychosocial disorders were the most common causes of UWL in older subjects in the current study.

In the present report, while 375 patients were initially categorized with unexplained UWL, malignancies were detected in 19 of them (5% of cases of unexplained UWL) by extending the initial follow-up period (ie up to 18 months after presentation) an additional 47 months. Overall, all later malignancies were diagnosed between 6 and 28 months after referral, with 9 of 19 being identified more than 12 months after it. Of note, the diagnosis was established postmortem in 14 of the
19 patients. Weight loss in patients with ‘occult’ cancers persisted from presentation in all but 1 case, in which it relapsed after a period of stabilization.

The study has some limitations. [See last paragraph starting at the bottom of page 13 and continuing through the first half of page 14.]

Our results have clinical implications. Based on the apparently exceptional occurrence of hidden’ cancer and the favorable prognosis of patients with unexplained UWL who have a negative baseline evaluation [2,4,5,8], it has been recommended a watchful waiting period of 1 to 6 months, while following-up patients for persistent weight loss and new manifestations indicative of an ‘occult‘ disorder [1,2,12–14,59].

Although we agree with these recommendations, which otherwise rely on few and small case series with variable, mostly short, follow-ups, appropriate follow-up periods have not been defined. Moreover, very few necropsies have been done in reported patients with unexplained UWL dying during follow-up [2–4,8].

Based on our findings, ‘occult‘ malignancies detected during a predefined follow-up of up to 66 months after presentation do not seem to be as rare as thought. Nonetheless, the fact that only 1 in 20 patients received such a diagnosis within this period, most notably within the first 28 months after referral for workup, is fairly reassuring.

Cancer evading early diagnosis constitute a major concern. In general, the prognosis of malignancies in patients presenting with UWL is very poor with
high mortality rates at the short-term because of frequently metastasizing disease when weight
loss becomes ostensible [1–3,8,14].

Therefore, despite a normal evaluation and workup and an undisclosed etiology within 1 to 6 months after presentation, evaluation should continue for
periods longer than those reported so far through regular follow-up consultations.

Furthermore, in order to advance the understanding of unexplained UWL, postmortem studies should be
actively pursued in dead patients. In our study, 37 patients who died during follow-up underwent autopsy but 35 did not. Lastly, older patients in whom an obvious cause of UWL is not initially identified should not only be asked about subjective oral difficulties but a careful inspection of the oral cavity should be systematically performed as well as a videofluoroscopy or a swallowing study if the oral examination does not yield conclusive results.

Among 2677 patients prospectively enrolled over 2 and a half years after referral to a diagnosis clinic of an academic hospital in Barcelona for evaluation of UWL and who underwent a systematic baseline and follow-up approach, 37% were diagnosed with nonmalignant organic disorders, 33% with malignancies, and 16% with psychosocial disorders.

Significant differences were observed according to patient age, with oral disorders being the second cause of UWL in ≥patients aged ≥65 years—only after nonhematologic cancers.

Of note, while 375 patients were initially diagnosed with unexplained UWL (14% of whole population) because a cause could not be recognized within the first 6 months, ‘hidden’ malignancies were detected in only 19 of them during an extensive follow-up of up to 5.5 years after presentation, with all cases being diagnosed within 28 months after it.

Importantly, diagnosis was established at necropsy in 14 cases. Therefore, although unexplained UWL is only rarely a cause for short-term medical alarm, serious underlying disease may be undetectable until death and, consequently, these patients should indeed be followed up regularly (eg annual visits).

In summary, the results in this large cohort of patients with UWL provide new information
on the significance of follow-up in the long-term outcome of unexplained cases and on the
role of patient age on this clinical entity