Links To Downloadable Questionnaires And Other Resources From The Columbia Protocol, also known as the Columbia-Suicide Severity Rating Scale (C-SSRS)

In this post, I link to and excerpt from The Columbia Protocol, also known as the Columbia-Suicide Severity Rating Scale (C-SSRS) [downloadable questionnaires and other resources], accessed 9-7-2022.

In addition to the above resource, please review:

The Columbia Protocol, also known as the Columbia-Suicide Severity Rating Scale (C-SSRS), supports suicide risk assessment through a series of simple, plain-language questions that anyone can ask. The answers help users identify whether someone is at risk for suicide, assess the severity and immediacy of that risk, and gauge the level of support that the person needs. Users of the tool ask people: 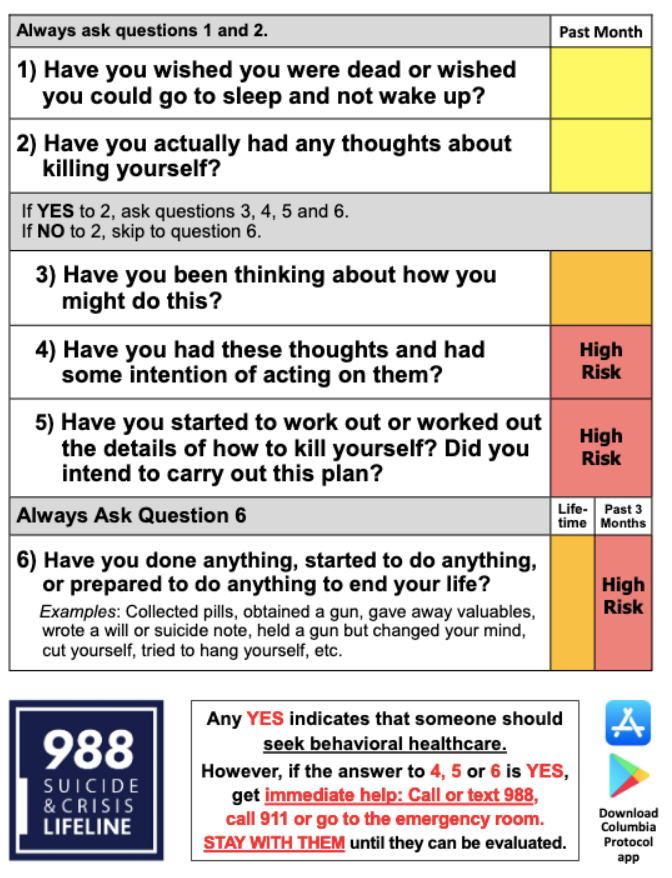 Protocol administrators ask a series of questions about suicidal thoughts and behaviors. The number and choice of questions they ask depend on each person’s answers. The questioner marks “yes” or “no,” as well as how recently the thought or behavior occurred and a scoring of its severity. The shortest screeners are condensed to a minimum of two and a maximum of six questions, depending on the answers, to most quickly and simply identify whether a person is at risk and needs assistance. For a more thorough assessment of a person’s risk, Columbia Protocol askers should use the standard scale.

The Columbia Protocol questions use plain and direct language, which is most effective in eliciting honest and clear responses. For example, the questioner may ask:

To use the Columbia Protocol most effectively and efficiently, an organization can establish criteria or thresholds that determine what to do next for each person assessed. Decisions about hospitalization, counseling, referrals, and other actions are informed by the “yes” or “no” answers and other factors, such as the recency of suicidal thoughts and behaviors.

The Columbia Lighthouse Project provides many examples of triage documents that Columbia Protocol users in hospitals, primary care practices, behavioral health care facilities, military services, prisons, and other settings employ to make these decisions. The Project also provides assistance to any organization that is thinking through its policy and establishing a care plan.

ENDORSED, RECOMMENDED, OR ADOPTED BY:

The first step in effective suicide prevention is to identify everyone who needs help. The Columbia Protocol was the first scale to address the full range of suicidal thoughts and behaviors that point to heightened risk. That means it identifies risk not only if someone has previously attempted suicide, but also if he or she has considered suicide, prepared for an attempt (for example, buying a gun, collecting pills, or writing a suicide note), or aborted plans for suicide because of a last-minute change of heart or a friend’s intervention.

The Columbia Protocol screens for this wide range of risk factors without becoming unwieldy or overwhelming, because it includes the most essential, evidence-supported questions required for a thorough assessment.

ORIGINS OF THE COLUMBIA PROTOCOL

Columbia University, the University of Pennsylvania, and the University of Pittsburgh — supported by the National Institute of Mental Health (NIMH) — developed the screening tool for a 2007 NIMH study of treatments to decrease suicide risk among adolescents with depression. The Columbia Protocol, based on more than 20 years of scientific study, filled an urgent need for suicide research and prevention: a better way to uniformly and reliably identify people who are at risk. The Columbia Protocol achieved accurate and comparable results by using consistent, well-defined, and science-based terminology. Just as important as its ability to identify who might attempt suicide, it was the first tool to assess the full range of a person’s suicidal ideation and behavior, including intensity, frequency, and changes over time. .

Get the Questions NOW