The following post, Pediatric Office Emergencies: Summary of Recommendations of The 2015 Bronchiolitis Guidelines From NICE, is a good post to use as a quick checklist. It might be quicker to review than the post below.

Bronchiolitis is a disease with three parts. It starts out as a URI. Then over the next few days, the wheezing of bronchiolitis occurs. And as the wheezing resolves the URI symptoms again predominate.

The treatment is supportive: oxygen therapy for respiratory distress and hydration if the patient is dehydrated or likely to become so. “One study estimated that one-third of infants hospitalized for bronchiolitis require fluid replacement.” Ref (2)

Inhaled epinephrine and 3% saline inhalation therapy are only indicated for patients being admitted. The Canadian Guidelines (1) say that the evidence for these two therapies are equivocal. The American Guidelines (2) are even less positive and advise against epinephrine therapy.

Nasal suctioning has traditionally been recommended. The Canadian Guidelines state that the evidence for it is equivocal.

So what follows are excerpts from Bronchiolitis: Recommendations for diagnosis, monitoring and management of children one to 24 months of age, Reference (1):

Bronchiolitis is a viral lower respiratory tract infection characterized by obstruction of small airways caused by acute inflammation, edema and necrosis of the epithelial cells lining the small airways as well as increased mucus production.[1]

Bronchiolitis affects more than one-third of children in the first two years of life and is the most common cause for admission to hospital in their first year. Over the past 30 years, hospitalization rates have increased from 1% to 3% of all infants.[1][7][8]

Bronchiolitis is a clinical diagnosis based on a directed history and physical examination. Bronchiolitis may present with a wide range of symptoms and severity, from a mild upper respiratory tract infection (URTI) to impending respiratory failure (Table 1). Bronchiolitis typically presents with a first episode of wheezing before the age of 12 months. The course begins with a two-to-three-day viral prodrome of fever, cough and rhinorrhea progressing to tachypnea, wheeze, crackles and a variable degree of respiratory distress. Signs of respiratory distress may include grunting, nasal flaring, indrawing, retractions or abdominal breathing. There may or may not be a history of exposure to an individual with a viral URTI. 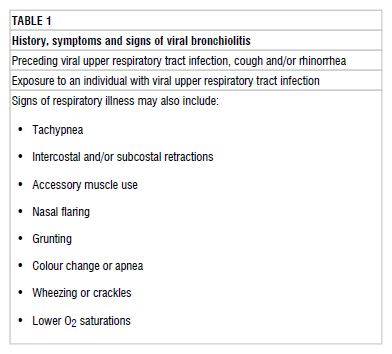 While the majority of wheezing infants who present acutely between November and April most likely have viral bronchiolitis, clinicians should consider a broad differential diagnosis, especially in patients with atypical presentations such as severe respiratory distress, no viral URTI symptoms and/or frequent recurrences (Table 2).[7] 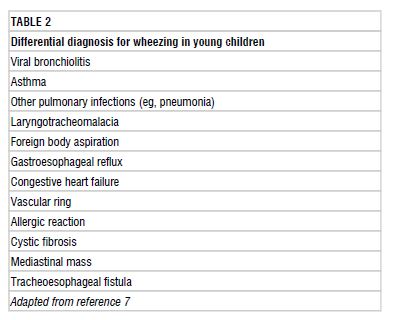 Diagnostic studies are not indicated for most children with bronchiolitis (Table 3). Tests are often unhelpful and can lead to unnecessary admissions, further testing and ineffective therapies. Evidence-based reviews have not supported the use of diagnostic testing in typical cases of bronchiolitis.[1][7] 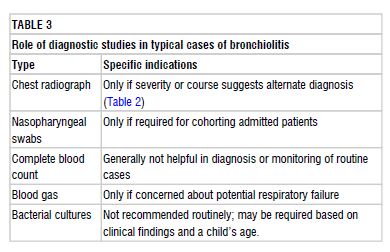 The decision to admit should be based on clinical judgment and consider the infant’s respiratory status, ability to maintain adequate hydration, risk for progression to severe disease and the family’s ability to cope (Tables 4 and 5). Physicians should keep in mind that the disease tends to worsen over the first 72 h when deciding whether to hospitalize.[23] Clinical scores and individual findings on physical examination cannot be relied on in isolation to predict outcomes. Severity scoring systems exist; however, none are widely used and few have demonstrated predictive validity. Respiratory rate, subcostal retractions and oxygen need may be the most helpful parameters used in the various bronchiolitis severity scores.[24] 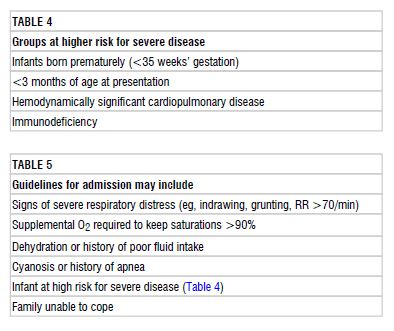 Repeated observations over a period of time are important because there may be significant temporal variability. Consistent predictors of hospitalization in outpatient populations[7][25] include age (<3 months) and history of prematurity (<35 weeks’ gestation). Another study found that patients with any three of the following four factors – decreased hydration, accessory muscle score >6 of 9, O2 saturation <92% and respiratory rate >60 breaths/min – had a 13-fold increase in hospitalization rate.[26]

Bronchiolitis is a self-limiting disease. Most children have mild disease and can be managed with supportive care at home. For those requiring admission, supportive care with assisted feeding, minimal handling, gentle nasal suctioning and oxygen therapy still forms the mainstay of treatment (Table 6). 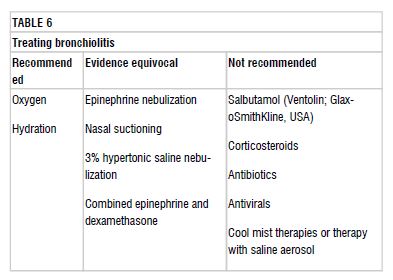 Nine clinical trials comparing physiotherapy with no treatment were reviewed.[49] Neither vibration and percussion nor passive expiratory techniques were shown to improve clinical scores or to reduce hospital stay or duration of symptoms. Chest physiotherapy is not recommended for the treatment of bronchiolitis.[1][49]

Therapies recommended based on evidence

Supplemental oxygen therapy is a mainstay of treatment in hospital. Oxygen should be administered if saturations fall below 90% and used to maintain saturations at ≥90%.[1] To minimize handling, oxygen is usually administered via nasal cannulae, face mask or a head box. A recent alternative is humidified high-flow nasal cannula therapy,[28]which may be better tolerated and potentially decrease the need for mechanical ventilation.[29][30] At this point, there is insufficient evidence to determine effectiveness.[31] There are, however, ongoing studies investigating this question, which will likely help to guide practice in the near future.

Some degree of fluid supplementation is required in 30% of hospitalized patients with bronchiolitis.[32]

Frequent feeds should be encouraged and breastfeeding supported; both may be facilitated by providing supplemental oxygen. Infants with a respiratory rate >60 breaths/min, particularly those with nasal congestion, may have an increased risk of aspiration and may not be safe to feed orally.[1] When supplemental fluids are required, a recent randomized trial found nasogastric (NG) and intravenous (IV) routes to be equally effective, with no difference in length of hospital stay.[33] NG insertion may require fewer attempts and have a higher success rate than IV placement. If NG bolus feeds are not tolerated, slow continuous feeds are an option. If the IV route is used, isotonic fluids (0.9% NaCl/5% dextrose) are preferred for maintenance, with regular monitoring of serum Na[34]because of the risk of hyponatremia.[35]

Patients with bronchiolitis should be cared for in an environment with ready access to suction equipment and supplemental oxygen that can be delivered at measurable rates. Close attention must be devoted to infection control processes. Respiratory contact isolation may reduce nosocomial transmission, but there is conflicting evidence regarding the benefits of cohorting patients.[2][8][54][55]

The most important component of monitoring infants admitted with bronchiolitis is regular and repeated clinical assessments by staff with appropriate expertise in the respiratory assessment of young children. Monitoring should include assessment and documentation of respiratory rate, work of breathing, oxygen saturation, findings on auscultation and general condition, including feeding and hydration status. Scoring tools have been developed in an attempt to standardize assessments and facilitate communication among caregivers. However, there is insufficient evidence of impact on patient outcomes to recommend using any specific tool.[56]–[58]

The use of electronic monitoring of vital signs and oxygen saturation should not be considered to be a substitute for regular clinical assessments by experienced personnel. Furthermore, there is growing evidence to suggest that continuous monitoring may prolong length of stay, particularly if staff react to normal transient dips in oxygen saturation or changes in heart and respiratory rates with interventions such as restarting oxygen therapy.[59] The accuracy of pulse oximetry is relatively poor, particularly at saturations <90%.[60]

The primary rationale for cardiac and respiratory monitoring is to detect episodes of apnea requiring intervention. The incidence of apnea in RSV bronchiolitis may be lower than previously believed. In a large study involving 691 infants <6 months of age, only 2.7% had documented apnea, and all had risk criteria of either a previous apneic episode or young age (<1 month or <48 weeks postconception in premature infants).[61]Continuous electronic cardiac and respiratory monitoring may be useful for high-risk patients in the acute phase of illness but are not necessary for the vast majority of patients with bronchiolitis.

Determining oxygen saturation can aid in decisions about escalating or weaning oxygen therapy. However, the issue of continuous versus intermittent monitoring of oxygen saturation is controversial. Continuous monitoring may be more sensitive for identifying patients who are deteriorating and need escalation of treatment. At the same time, many healthy infants exhibit typical transient O2 saturation dips[62][63] and length of stay may be prolonged if oxygen therapy is based on arbitrary saturation targets. Several clinical trials currently underway are attempting to determine best practices in this area. Until clear evidence is available, a reasonable approach is to adjust the intensity of oxygen saturation monitoring according to the patient’s clinical status. Continuous saturation monitoring is appropriate for high-risk patients early in the course of disease, while intermittent monitoring is most appropriate for lower-risk patients and for all patients once they are feeding well, weaning from supplemental oxygen and showing improvement in work of breathing. 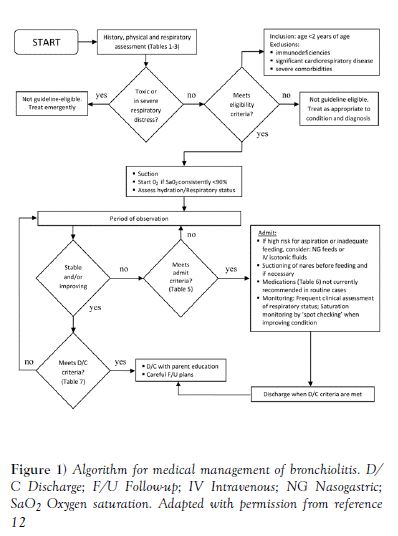 Readiness for discharge from hospital should be based on clinical judgement and consider the family’s ability to recognize and respond to signs of deterioration. In general, patients may be safely discharged from hospital once they are improving clinically and meet criteria listed in Table 7.

(3) Dr. Fox’s posts, Bronchiolitis – Who Needs to Stay? · FEBRUARY 10, 2012 and Bronchiolitis – “Seriously, what should I do?” · NOVEMBER 5, 2010, from Pediatric EM Morsels contain practical wisdom that is still useful even considering the new 2014 AAP Guidelines.

(5) See Dr. Plink’s discussion of the use of epinephrine, dexamethason, and hypertonic saline in Episode 59b: Amy Plint on the Management of Bronchiolitis [link to show notes and podcast] from Emergency Medicine Cases. Dr. Plint is the first author of  Epinephrine and dexamethasone in children with bronchiolitis [PubMed Abstract]. N Engl J Med. 2009 May 14;360(20):2079-89. doi: 10.1056/NEJMoa0900544.

This entry was posted in Guidelines, Pediatric Emergency Medicine, Pediatrics. Bookmark the permalink.