Google+ The Canadian TIA Score Is Ready For Prime Time: Links To And Excerpts From "Prospective validation of Canadian TIA Score and comparison with ABCD2 and ABCD2i for subsequent stroke risk after transient ischaemic attack: multicentre prospective cohort study" With An Additional Resource - Tom Wade MD

The Canadian TIA Score Is Ready For Prime Time: Links To And Excerpts From “Prospective validation of Canadian TIA Score and comparison with ABCD2 and ABCD2i for subsequent stroke risk after transient ischaemic attack: multicentre prospective cohort study” With An Additional Resource

What follows is from the above resource.

What is already known on this topic

What this study adds

Main outcome measures: The primary outcome was subsequent stroke or carotid endarterectomy/carotid artery stenting within seven days. The secondary outcome was subsequent stroke within seven days (with or without carotid endarterectomy/carotid artery stenting). Telephone follow-up used the validated Questionnaire for Verifying Stroke Free Status at seven and 90 days. All outcomes were adjudicated by panels of three stroke experts, blinded to the index emergency department visit.

Conclusion: The Canadian TIA Score stratifies patients’ seven day risk for stroke, with or without carotid endarterectomy/carotid artery stenting, and is now ready for clinical use. Incorporating this validated risk estimate into management plans should improve early decision making at the index emergency visit regarding benefits of hospital admission, timing of investigations, and prioritisation of specialist referral.

Our study validates the predictive performance of the Canadian TIA Score in a broad sample of patients prospectively enrolled in the emergency department with a diagnosis of transient ischaemic attack or minor stroke. To improve the generalisability of the score, we included both community and academic centres, including six new sites that were not involved in the derivation study. The score was able to correctly stratify many more patients into pre-specified risk zones than were other scores based on the ABCD paradigm. Having withstood prospective validation in a newly assembled, contemporaneous cohort, and satisfying stringent criteria for the development of a clinical decision rule/score, this tool can now be adopted into clinical practice.

The Canadian TIA Score performed significantly better than the ABCD2 scores. . . . Although our score is more complex and is not intended to be memorised, it requires only routinely available information from the history, bedside assessment, and test results to stratify patients. It can be readily used and applied by physicians in the emergency department, as it does not require advanced neuroimaging, which is often unavailable. It allows one to customise the urgency of, for example, advanced neuroimaging or to inform the decision surrounding inpatient admission versus outpatient specialty consultation according to local preferences or to incorporate patients’ preferences. Many hospitals are unable to offer 24/7 access to magnetic resonance imaging and/or need to transfer patients for specialty consultation. Stratifying the risk for patients allows for more standardised care, more equitable deployment of constrained resources, and probably better outcomes.29 30

Comparisons with other studies

The Canadian TIA Score includes 13 variables, so clinicians will probably need to use an online calculator or smartphone application to calculate the risk of their patients. Given that physicians already use these tools for many patients, this is likely a minor limitation and represents the heterogeneity of risk assessment for cerebral ischaemia. 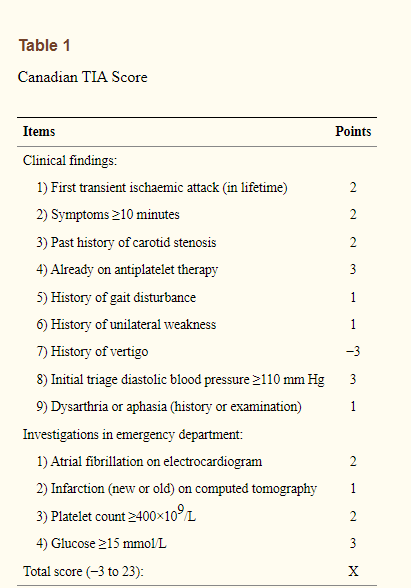 Clinicians may now use the Canadian TIA Score to stratify patients as being at low, medium, or high risk for subsequent early stroke (with or without early carotid revascularisation). The optimal management pathway at the local or regional level can be determined on the basis of the expected risk at a given risk category (for example, same day computed tomography with routine follow-up for patients at low risk, computed tomography angiography and rapid follow-up for those at medium risk, and neurology consultation in the emergency department for those at high risk).

The Canadian TIA Score identifies the risk of patients with transient ischaemic attack for subsequent stroke or carotid artery revascularisation within seven days. Incorporating this validated risk estimate into management plans should improve decisions on the benefits of hospital admission at the index visit, urgency of testing and interventions, and prioritisation of specialist follow-up for patients discharged from the emergency department.

This entry was posted in Guidelines, Stroke, Transient Ischemic Attack. Bookmark the permalink.