So then I listened to Dr. Farkas’ podcast on Catastrophic Antiphospholipid Syndrome (CAPS). And now I had something new I didn’t fully understand and  it was something that I had never heard about.

So in this post, I’ve made study notes of his post and other resources to see if I could better understand antiphospholipid antibody syndrome and the catastrophic antiphospholipid syndrome.

Catastrophic antiphospholipid syndrome (CAPS) is a truly rare cause of multi-organ failure. It is usually not considered as a diagnostic possibility, leading it to be mis-diagnosed as septic or cardiogenic shock. Awareness of this condition and various red flags suggesting its presence might facilitate earlier diagnosis and therapy.

And here is Dr. Farkas’ outstanding summary graphic of the topic: 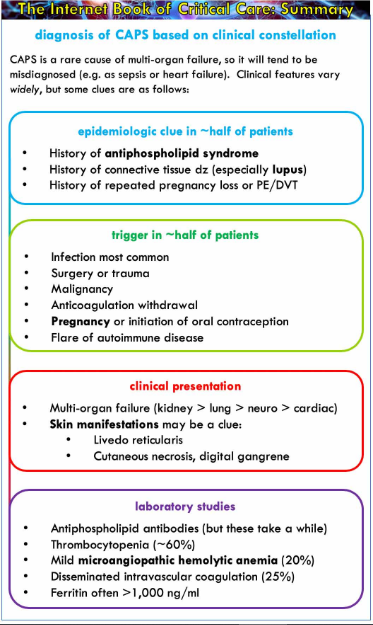 What follows is from Medscape Anticardiolipin Antibody Background:

Antiphospholipid syndrome (APS) is an autoimmune disorder characterized by recurrent thrombosis and pregnancy morbidity in the presence of antiphospholipid antibodies (APLA). APS is diagnosed when at least one requirement from both clinical and laboratory criteria are met.

Clinical criteria include the following:

Laboratory criteria include the following:

Although not included in the diagnostic criteria, other clinical symptoms, such as livedo reticularis, nephropathy, thrombocytopenia, cardiac valvular disease, and neurological symptoms are commonly associated comorbidities. [5]

An anionic side of the phospholipids that constitutes the cell membrane normally faces the cytoplasm. In the setting of initial injury, the anionic surface is exposed to the exterior. aCL binds to the anionic phospholipid on the platelet membrane and to the b2-GPI free flowing in the serum. Deposition of this aCL immune complex causes additional exposure of anionic phospholipids and platelet activation by unidentified signal transducing mechanisms. This cascade eventually leads to the formation of thrombosis. APLA refers to other prothrombotic antibodies that behave similarly to aCL. LA and anti–b2-GPI are among the APLAs. [6]

aCL testing is performed as part of the workup of excessive clotting episodes, along with LA and anti–b2-GPI antibody tests.

In addition, aCL testing is indicated in certain clinical settings.

To identify APLA, the laboratory tests include enzyme-linked immunosorbent assay (ELISA), and functional assays. The three known APLA are:

The clinical features vary significantly and can be as mild as asymptomatic APLA positivity, or as severe as catastrophic APLS. Arterial and venous thrombosis and pregnancy-related complications are the hallmarks of the disease. However, several other organ systems may be involved (non-criteria manifestations).

APLS can cause arterial and/or venous thrombosis involving any organ system. APLS related thrombotic events can occur without preceding risk of thrombosis. They can be recurrent and can involve vessels unusual for other-cause-thrombosis (such as upper extremity thrombosis, Budd-Chiari syndrome, and sagittal sinus thrombosis). Venous thrombosis involving the deep veins of lower extremities is the most common venous involvement and may lead to pulmonary embolism resulting in pulmonary hypertension. Any other site may be involved in venous thrombosis, including pelvic, renal, mesenteric, hepatic, portal, axillary, ocular, sagittal, and inferior vena cava.

Pregnancy loss in patients with APLS is common, especially in the second or third trimester. While genetic and chromosomal defects are the most common cause of early (less than 10-week gestation) pregnancy loss, they may also occur in patients with APLS. Tripple positivity (lupus anticoagulant, anticardiolipin and anti-beta-2-glycoprotein-I antibodies), previous pregnancy loss, history of thrombosis, and SLE are risk factors for adverse pregnancy-related outcomes and pregnancy losses in APLS. Besides pregnancy losses, other pregnancy-related complications in APLS include pre-eclampsia, fetal distress, premature birth, intrauterine growth retardation, placental insufficiency, abruptio placentae, and HELLP syndrome (Hemolysis, Elevated Liver enzymes, Low Platelet count).

Cardiac valve involvement is very common in APLS, with some studies noting a prevalence as high as 80%. [10] Mitral and aortic valves are most commonly involved with thickening, nodules, and vegetations evident on echocardiography. This may lead to regurgitation and/or stenosis.

Thrombocytopenia has been seen in more than 15% of APLS cases.[11] Severe thrombocytopenia leading to hemorrhage is rare. Positive Coomb test is frequently seen in APLS, although hemolytic anemia is rare.

The most common neurological complication of APLS includes TIAs and ischemic stroke, which may be recurrent, leading to cognitive dysfunction, seizures, and multi-infarct dementia. Blindness secondary to the retinal artery or vein occlusion can occur. Sudden deafness secondary to sensorineural hearing loss has been reported.

Pulmonary artery thromboembolism from deep vein thrombosis is common and may lead to pulmonary hypertension. Diffuse pulmonary hemorrhage resulting from pulmonary capillaritis has been reported.

Hypertension, proteinuria, and renal failure secondary to thrombotic microangiopathy is the classic renal manifestation of APLS, although this is not specific to APLS. Other renal manifestations reported include renal artery thrombosis leading to refractory hypertension, fibrous intimal hyperplasia with organized thrombi with or without recanalization, and focal cortical atrophy.

Preliminary criteria for the classification of CAPS were published in 2003. [13] The four criteria are:

Early diagnosis is crucial in the management of CAPS due to the high mortality associated with it. There are no randomized controlled trials for the management of CAPS. Anticoagulation and high dose corticosteroids are used in combination with IVIG, plasmapheresis, rituximab, cyclophosphamide, or eculizumab.

Thrombosis due to antiphospholipid antibody syndrome must be differentiated from other causes of thrombosis such as hyperhomocysteinemia, factor V Leiden and prothrombin mutations, deficiency of protein C, protein S, or antithrombin III.

APLS associated nephropathy has to be differentiated from thrombotic thrombocytopenic purpura (TTP), vasculitis, hemolytic uremic syndrome (HUS), malignant hypertension, and lupus nephritis. A kidney biopsy is often needed to make a diagnosis in these cases.

Some European studies have observed 90% to 94% survival over ten years. However, morbidity is high in APLS, with more than 30% of patients developing permanent organ damage and more than 20% of patients developing severe disability at a 10-year follow-up. [17] Poor prognostic features include CAPS, pulmonary hypertension, nephropathy, CNS involvement, and gangrene of the extremities.

Overall the prognosis of both primary and secondary APLS is similar, but in the latter, the morbidity may be increased as a result of any underlying rheumatic or autoimmune disorder. Lupus patients with antiphospholipid antibodies carry a higher risk of neuropsychiatric disorders.

So with the above review in mind I now return to Dr. Farkas’ post Catastrophic Antiphospholipid Syndrome (CAPS) [Link To Podcast] [Link To Show Notes]:

Here are the direct links from Dr. Farkas’ post to each section of the chapter. So just review all of the notes. [Note to myself] 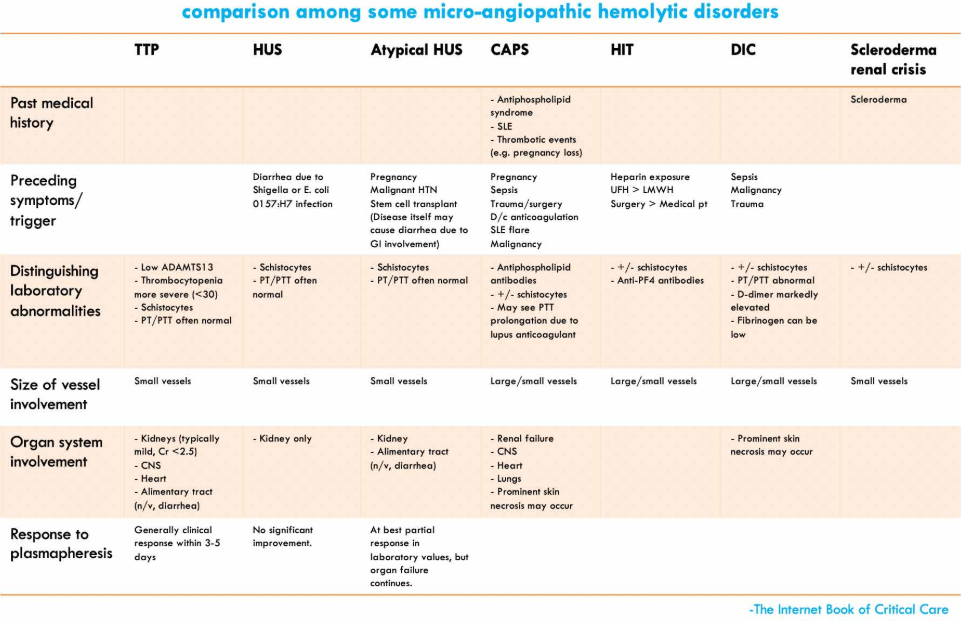 Linkedin
This entry was posted in Emedicine.Medscape, Hematology, Internet Book Of Critical Care By Dr. Farkas. Bookmark the permalink.