I have reviewed the article referenced below and wanted it easily accessible in the blog (my study notes) and made excerpts in this post.

I’m using the article’s PubMed Abstract as a quick way into the literature of the No Reflow Phenomenon.

The above article has been cited by 5 PubMed Central articles.

The following are excerpts from the article:

Greater than 50% of patients successfully resuscitated from cardiac arrest have evidence of neurological disability. Numerous studies in children and adults, as well as
in animal models have demonstrated that cerebral blood flow (CBF) is impaired after cardiac arrest. Stages of cerebral perfusion post-resuscitation include early hyperemia, followed by hypoperfusion, and finally either resolution of normal blood flow or protracted hyperemia. At the level of the microcirculation the blood flow is heterogeneous, with areas of no flow, low flow, and increased flow.    .    .    .    Assessment of CBF and oxygenation is not routinely performed after cardiac arrest. Currently available and underutilized techniques to assess cerebral perfusion include transcranial doppler, near-infrared spectroscopy, and arterial spin labeling magnetic resonance imaging. Limited clinical studies established the role of CBF and oxygenation monitoring in prognostication after cardiac arrest and few studies suggest that guiding critical care post-resuscitation to mean arterial pressures above the minimal autoregulatory range might improve outcome. Important knowledge gaps thus remain in cerebral monitoring and CBF and oxygen goal-directed therapies post-resuscitation from cardiac arrest.

In the hours and days following successful resuscitation from cardiac arrest, various organs are recovering from global ischemia–reperfusion. The two key organs that determine the ultimate prognosis of pediatric patients resuscitated from cardiac arrest are the heart and the brain. Hypoxic ischemic encephalopathy persists and evolves during the days and weeks after cardiac arrest and is the major limiting factor in the full recovery of the victims of cardiac arrest. In the immediate period after cardiac arrest, there are important disturbances at the level of cerebral blood flow (CBF), cerebral oxygenation, and cerebral metabolism. The function of the neurovascular unit is disrupted.

We will present several methods used for assessment of cerebral perfusion, and review the evolution of CBF during the after cardiac arrest first in animal models and then in humans. 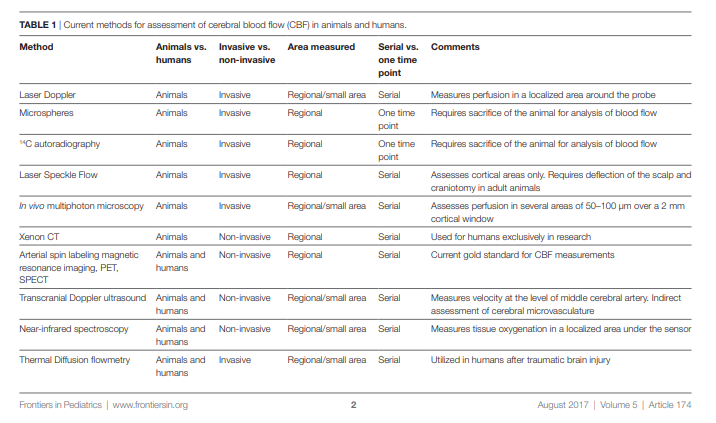 Methods for CBF Assessment in Humans

Limited evaluation of CBF has been performed in humans after
CA, due to the availability of only a few non-invasive means and
portable devices. For human use, an ideal tool for CBF assessment post-resuscitation should be employable early post-resuscitation and be portable, non-invasive, not interfere with clinical care, and allow for serial assessments. Post-resuscitation research is still in search of this tool, and this represents the largest knowledge gap and the greatest impediment to goal-directed cerebral resuscitation.
Cerebral perfusion can currently be assessed in children and
adults after cardiac arrest using three techniques: TCD, ASLMRI, or Xenon CT. Additionally, implantable CBF monitors suchas thermal diffusion flowmetry are available invasive methods which have been used to assess perfusion in isolated case reports of cardiac arrest (11) and have been extensively used in patients with traumatic brain injury and subarachnoid hemorrhage (12, 13). In the past, valuable CBF data were obtained in adults using tracers (133Xe) (14) or thermodilution methods (15); however, with the advent of the newer, less invasive technologies enumerated above, these two techniques have not been used recently.

The methods referenced above are well discussed in the body of the article. 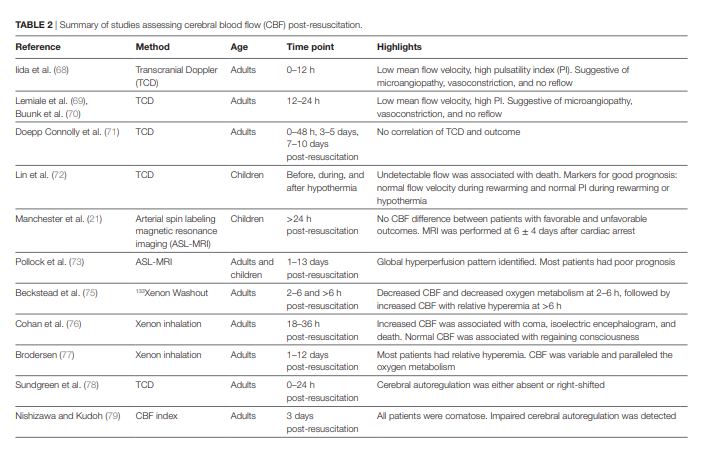 During the immediate and early periods after cardiac arrest there are microcirculatory disturbances, resulting in localized areas of no flow, interspersed with areas of low flow and increased flow. This phenomenon was initially described by Ames et al. in a model of global ischemia in rabbits in 1968 as incomplete filling of the cortical capillary bed upon perfusion with contrast agent and is known as the no-reflow phenomenon (54). The perfusion deficits increased with increased duration of ischemia and the no-reflow phenomenon has been observed in various models of cardiac arrest (55, 56)

Multiple mechanisms have been proposed to be responsible
for the no-reflow phenomenon, including post-resuscitation
hypotension, increase in blood viscosity, and fibrin clots (34,
57–59). Therapies targeting these mechanisms have shown beneficial effect in animal models. For example, blood flow promotion
therapy with hypertension and hemodilution immediately after
cardiac arrest has been shown to normalize the CBF pattern and
improve outcome in dogs (46, 60). Thrombolytic therapies with
plasminogen activator and heparin reduced no-reflow phenomenon seen after cardiac arrest and produced more homogeneous perfusion (61). The no-reflow phenomenon likely contributes to the hypoperfusion observed post-resuscitation and likely causes a secondary ischemic injury.

In summary, valuable data regarding alterations of CBF postresuscitation is obtained from animal models of cardiac arrest. These models have the advantage of allowing serial, regional assessment of CBF, and comparison of CBF alterations in insults of progressive durations, simultaneous assessment of CBF, brain oxygenation, metabolism, and electrical activity (62), assessment of microvascular alterations, and development of novel CBF and neuronal targeted therapies.