Healthcare Profesionals Should Promote Well-Being Rather Than Just Good Health

Perhaps physicians and all other healthcare clinicians should see their mission as promoting Well-Being rather than the much more limited goal of Health. Consider the following:

The following excerpts are from “Well-Being In All Policies (Resource 1 below):

In “A New Perspective on the Health of Canadians,” Marc
Lalonde, the Canadian Minister of National Health and Welfare,
concluded that health care does not have the power to fully mitigatethe threats posed by unhealthful environments and behaviors (2). This 1974 report broke new ground by creating a comprehensive framework for the determinants of health based on 4 health fields — human biology, environment, lifestyle, and health care organization.

. . . , Evans and Stoddart viewed health as more than the absence of disease, but as the WHO did not, they explicitly distinguished health from well-being. They expressed the opinion that the WHO definition of health, “a state of complete physical, mental and social well-being and not merely the absence of disease or infirmity,” conflated health with well being. Since then others have agreed. In a critique of the WHO definition in 1997, Rodolfo Saracci wrote, “Common existential problems — involving emotions, passions, personal values, and questions on the meaning of life — can make your days less than happy or even frankly uncomfortable, but they are not reducible to health problems” (4). Similarly, ChristopherB. Forrest wrote in 2013 that the WHO definition “conflates health with happiness and life satisfaction, key dimensions of well-being”
(5) 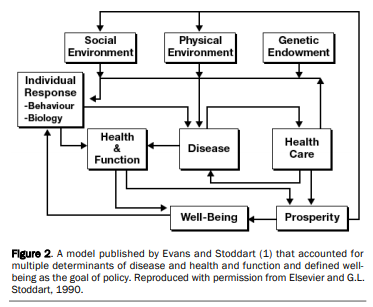 Evans and Stoddart wrote that well-being “is or should be (we
postulate) the ultimate objective of health policy” and “[t]he ultimate test of [health] policy is whether or not it adds to the well-being of the population served.”

The United States does not seem to heed the message that the most significant determinants of health are not health care. Relative to other countries in the Organisation for Economic Co-operation and Development, a consortium of 34 countries dedicated to improving the economic and social well-being of people around the world, the United States continues a practice of overinvesting in health care and underinvesting in the other determinants of health (9). Between 1990 and 2014, health care spending in the United States increased from 12.1% to 17.5% of gross domestic product (GDP) (10). Despite this high level of investment, health outcomes declined relative to other developed countries during the same period (11)

The Words We Use Influence Our Thinking

In the 19th century, linguists introduced the concept that language determines thinking (12). We believe that linguistic reasons explainwhy the broader determinants of health might not be taken into consideration when social policy is formulated in the United States. We wish to draw attention to 3 reasons in particular:

Well-Being Is Not Just Physical Health

Although physical health and well-being are related, this relationship is much weaker than might be expected (17). The association between subjective health and life satisfaction is somewhat stronger but still far from unitary. For example, in a study based on nationally representative samples from the 32 countries that participated in the first 6 rounds of the European Social Survey, self-reported health ratings explained, on average, about 9% of the individual-level variance in life satisfaction; in no country did it explain more than 15% of the variance (18).

Evidence is clear that policies from diverse sectors — law, economics, public safety, and education, to name a few — affect well being. Diener et al (22) observed that the happiest nations are economically developed and relatively wealthy, perhaps because the basic needs and desires of citizens are met to a larger extent in rich nations than in poorer nations. However, Diener et al also summarized the results of multiple studies listing several other modifiable characteristics of societies that have high levels of well-being. These societies have the following qualities: