“What Is Mitochondrial Disease?” – Help from UMDF

Recently, a friend was telling me about his young wife’s (52 yrs old) stroke that caused cortical blindness and was itself caused by a mitochondrial disease.

Mitochoncrial disease most commonly effects children but more and more is being diagnosed in adults.

A good place to start learning about mitochondrial disease is at the page What is Mitochoncrial Disease? of the United Mitochondrial Disease Foundation (UMDF). All that follows is from that page [An additional very useful resource is the National Organization for Rare Disorders (NORD) which publishes the very useful NORD Physician Guides: Rare Disease Resources For Medical Professionals]:

What is Mitochondrial Disease?

Mitochondrial diseases result from failures of the mitochondria, specialized compartments present in every cell of the body (except red blood cells).

Mitochondria are responsible for creating more than 90% of the energy needed by the body to sustain life and support organ function. When they fail, less and less energy is generated within the cell. Cell injury and even cell death follow. If this process is repeated throughout the body, whole organ systems begin to fail.

The parts of the body, such as the heart, brain, muscles and lungs, requiring the greatest amounts of energy are the most affected. Mitochondrial disease is difficult to diagnose, because it affects each individual differently. Symptoms can include seizures, strokes, severe developmental delays, inability to walk, talk, see, and digest food combined with a host of other complications. If three or more organ systems are involved, mitochondrial disease should be suspected.

Energy Factories and Much More

The conventional teaching in biology and medicine is that 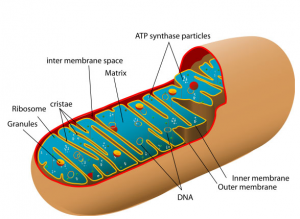 mitochondria function only as “energy factories” for the cell. This over-simplification is a mistake which has slowed our progress toward understanding the biology underlying mitochondrial disease. It takes about 3000 genes to make a mitochondrion. Mitochondrial DNA encodes just 37 of these genes; the remaining genes are encoded in the cell nucleus and the resultant proteins are transported to the mitochondria. Only about 3% of the genes necessary to make a mitochondrion (100 of the 3000) are allocated for making ATP. More than 95% (2900 of 3000) are involved with other functions tied to the specialized duties of the differentiated cell in which it resides. These duties change as we develop from embryo to adult, and our tissues grow, mature, and adapt to the postnatal environment. These other, non-ATP-related functions are intimately involved with most of the major metabolic pathways used by a cell to build, break down, and recycle its molecular building blocks. Cells cannot even make the RNA and DNA they need to grow and function without mitochondria. The building blocks of RNA and DNA are purines and pyrimidines. Mitochondria contain the rate-limiting enzymes for pyrimidine biosynthesis (dihydroorotate dehydrogenase) and heme synthesis (d-amino levulinic acid synthetase) required to make hemoglobin. In the liver, mitochondria are specialized to detoxify ammonia in the urea cycle. Mitochondria are also required for cholesterol metabolism, for estrogen and testosterone synthesis, for neurotransmitter metabolism, and for free radical production and detoxification. They do all this in addition to breaking down (oxidizing) the fat, protein, and carbohydrates we eat and drink.

UMDF – Sumit Parikh, MD – What is mitochondrial disease? from UMDF on Vimeo.

UMDF – Sumit Parikh, MD – What do you tell new patients about mitochondrial disease? from UMDF on Vimeo.

UMDF – Sumit Parikh, MD – Why is mitochondrial disease hard to diagnose? from UMDF on Vimeo.

UMDF – Dr. Marni Falk – What systems are affected by mitochondrial disease? from UMDF on Vimeo.

Mitochondrial diseases are the result of either inherited or spontaneous mutations in mtDNA or nDNA which lead to altered functions of the proteins or RNA molecules that normally reside in mitochondria. Problems with mitochondrial function, however, may only affect certain tissues as a result of factors occurring during development and growth that we do not yet understand. Even when tissue-specific isoforms of mitochondrial proteins are considered, it is difficult to explain the variable patterns of affected organ systems in the mitochondrial disease syndromes seen clinically.

Because mitochondria perform so many different functions in different tissues, there are literally hundreds of different mitochondrial diseases. Each disorder produces a spectrum of abnormalities that can be confusing to both patients and physicians in early stages of diagnosis. Because of the complex interplay between the hundreds of genes and cells that must cooperate to keep our metabolic machinery running smoothly, it is a hallmark of mitochondrial diseases that identical mtDNA mutations may not produce identical diseases. Genocopies are diseases that are caused by the same mutation but which may not look the same clinically.

The converse is also true: different mutations in mtDNA and nDNA can lead to the same diseases. In genetics, these are known as phenocopies. A good example is Leigh syndrome, which can be caused by about a dozen different gene defects. Leigh syndrome, originally a neuropathological description of the brain of one affected child, was described by Denis Leigh, the distinguished British physician, in 1951. It is characterized by bilaterally symmetrical MRI abnormalities in the brain stem, cerebellum, and basal ganglia, and often accompanied by elevated lactic acid levels in the blood or cerebrospinal fluid. Leigh syndrome may be caused by the NARP mutation, the MERRF mutation, complex I deficiency, cytochrome oxidase (COX) deficiency, pyruvate dehydrogenase (PDH) deficiency, and other unmapped DNA changes. Not all children with these DNA abnormalities will go on to develop Leigh syndrome, however.

What Now? [Note: All These Links Are To Pages On the UMDF website]

This entry was posted in Genetic and Rare Diseases, Genetics and Epigenetics, Pediatric Growth + Deveopment, Pediatrics. Bookmark the permalink.