2016 Guideline: “Appropriate Utilization of Cardiovascular Imaging in Emergency Department Patients With Chest Pain” From The ACC and ACR 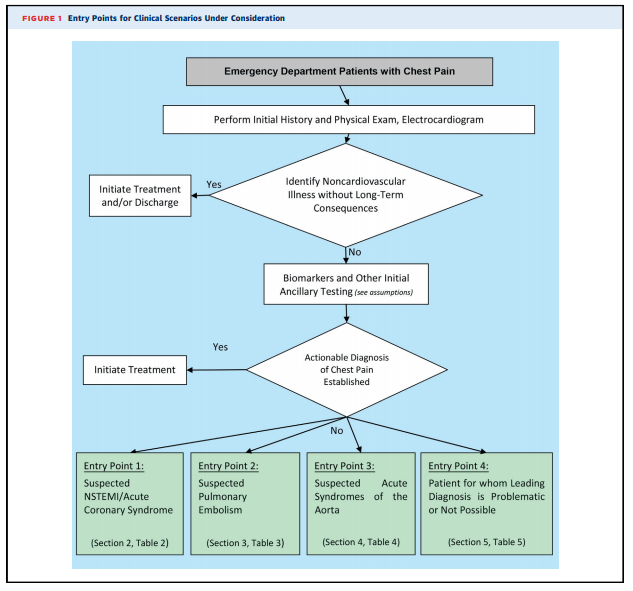 There are three groups of appropriateness ratings:

Appropriate – rating 7, 8, or 9: An appropriate option for the management of patients in this population because of benefits generally outweighing risks; an effective option for individual care plans although not always necessary depending on physician judgment and patient specific preferences (i.e., the procedure is generally acceptable and is generally reasonable for the indication).

May be appropriate – rating 4, 5, or 6: At times an appropriate option for the management of patients in this population because of variable evidence or agreement regarding the benefit/risk ratio, potential benefit on the basis of practice experience in the absence of evidence, and/or variability in the population; effectiveness for individual care must be determined by a patient’s physician in consultation with the patient on the basis of additional clinical variables and judgment along with patient preferences (i.e., the procedure may be acceptable and may be reasonable for the indication).

Rarely appropriate – rating 1, 2, or 3: Rarely an appropriate option for the management of patients in this population because of the lack of a clear benefit/risk advantage; rarely an effective option for individual care plans; exceptions should have documentation of the clinical reasons for proceeding with this care option (i.e., the procedure is not generally acceptable and is not generally reasonable for the indication).

1. All adult patients presenting to EDs with potential CP syndromes will undergo evaluations that generally include history and physical examination, immediate electrocardiography (ECG) to identify or exclude STsegment elevation myocardial infarction (STEMI), and cardiac and/or pulmonary biomarker analysis (troponin and/or D-dimer) (Figure 1). Some patients will be diagnosed with noncardiovascular illnesses that exclude ACS, PE, and AAS, and in general, no imaging is required. Patients with evidence of STEMI on initial ECG or initial biomarkers and/or ECG clearly consistent with ACS or NSTEMI are admitted and treated according to evidence-based guidelines. These patients are, in general, not the subjects of this document.

2. Table 1 evaluates the role of imaging in the process of the initial workup, with two common scenarios that include patients for whom ECG is diagnostic for STEMI and patients for whom an alternative, noncardiac diagnosis is likely.

3. After the initial evaluation, it is assumed that the physician will be able to clinically risk-stratify the majority of those remaining patients into one of the three suspected diagnoses of concern: ACS (Section 2), PE (Section 3), and AAS (Section 4). Section 5 includes the minority of patients for whom a leading diagnosis is not possible. Sections 2 through 5 assume that the initial workup and ancillary testing, including cardiac and/or pulmonary biomarkers, are completed (Figure 1).

4. Some patients who enter the clinical scenarios and undergo imaging studies will have inconclusive data to confirm or exclude a leading diagnosis after imaging. Although ratings for Sections 2 through 5 may have more than one imaging study that may be considered appropriate, this document does not specifically address the appropriate use of a second imaging study. The writing group acknowledges that although such patients can present a diagnostic dilemma, there are limited or no data on which to establish appropriate use criteria for the second study, particularly because findings from the first study may influence the best choice for subsequent imaging.

5. One-third of patients with confirmed acute myocardial infarction (AMI) will not have typical CP; Section 2 includes those patients.

6. Imaging in the ED alone, or during evaluation in an observation unit, is considered in this document. Some patients may be candidates for outpatient referrals for follow-up imaging in lower intensity settings. The clinical scenarios in this document in general do not cover these referrals, nor does this document include imaging for patients who do not present to the ED.

7. Miniaturization of ultrasound technology has enabled the use of focused cardiac ultrasound (FOCUS), or bedside ultrasonography performed by the emergency medicine physician, using highly portable equipment that lends itself well to use in an ED setting when a rapid evaluation is required. [There is an extensive discussion in part 7 of the appropriate use of this modality but it was not considered by the rating panel. See Section 7 in the text for details.]

Patients under consideration for rating among imaging tests do not have specific comorbidities or contraindications as noted below.

1. Unless otherwise stated, the following absolute or relative contraindications that would preclude certain types of imaging are assumed not to be present: claustrophobia, pregnancy, iodine allergy, renal dysfunction, and high resting heart rate.

2. Imaging studies that deliver ionizing radiation are, in general, relatively contraindicated during pregnancy.

3. Gadolinium-enhanced MRI is, in general, not performed in patients who are pregnant.

Clinical Scenario 6: TIMI Risk Score = 0, Early hsTrop Negative
As noted under “Testing Considerations,” although highsensitivity troponins (13) are, at the time of rating [meaning at the time of this article], not approved for use in the United States, they are increasingly used outside the United States. Moreover, an emerging body of literature suggests that incorporating these biomarkers can identify a group of patients already at very low clinical risk whose ACS prevalence and event rate are very low. Conceptually, in such a setting, no further testing may be considered, as the yield would likely be low. The rating panel has considered CCTA appropriate in this setting, as some of the extant trials of CCTA versus standard-of-care evaluation have generally included relatively low-risk populations. In one study, there were no cardiac deaths, and only 1% of patients had MIs within 30 days (38). In this population, CCTA was rated as appropriate, and all other imaging modalities were rated as rarely appropriate.

Multidetector-row CT scanners rapidly image the entire chest with high spatial resolution (121–123,125,126), and extant guidelines (120,127) have demonstrated CTPA as a useful diagnostic strategy to exclude or confirm the presence of a filling defect in a patient for whom there is clinical suspicion for PE. In a meta-analysis of 3,500 patients undergoing CTPA and followed for at least three months, the overall NPV of CT was 99.4% (128). A validated outcome strategy is D-dimer testing followed by CTPA for patients with abnormally elevated D-dimer levels. Using this strategy, only 1.5% of patients with negative findings developed DVT or PE during 3-month follow-up (129). A systematic review of management outcome studies showed that patients with low or moderate pretest probability and normal D-dimer levels had a very low 3-month thromboembolism rate (130). CTPA also identifies other pulmonary diseases, including pneumonia, atelectasis, pneumothorax, and pleural effusion, that might not be well visualized on chest radiography.

The latest generation scanners can image thrombus in sixth-order vessels (131). These thrombi are so tiny that their clinical significance is uncertain (132). The presence of right-heart strain is a poor prognostic factor for patients with PE; therefore, the interpreter should compare the size of the right ventricle with that of the left ventricle in positive cases (133), as a normal right ventricle’s diameter is smaller than that of the left ventricle.

CTPA using rapid imaging protocols can include additional scanning to identify DVT in the subclavian veins and other major upper extremity veins that might contain thrombi and serve as the source of PE. Although protocols have been developed and tested for imaging the venous system in the abdomen, pelvis, thighs, and knees for pelvic vein thrombosis and proximal leg DVT (134), CT venography is not routinely used at the time of pulmonary angiography, as it increases radiation exposure and rarely changes clinical management (131,135,136). Combined CTPA and CT venography were not considered by the rating panel.

SECTION 4: IMAGING OF PATIENTS WITH SUSPECTED ACUTE SYNDROMES OF THE AORTA

SECTION 5: IMAGING OF PATIENTS FOR WHOM A LEADING DIAGNOSIS IS PROBLEMATIC OR NOT POSSIBLE

CP patients who present to the ED with complex patterns of signs, symptoms, and clinical data (e.g., laboratory assessment, ECG) can undergo a variety of imaging strategies. The ED physician typically places such patients into one of the three diagnostic pathways as detailed in Sections 2 to 4. It is also assumed that alternative imaging pathways may be necessary if the initial, tentative diagnosis is not confirmed. For this reason, such complex patients often undergo more than one imaging study to arrive at a diagnosis or to exclude all diagnoses considered to be life threatening. As noted previously, this document does not consider a “second” imaging study, as there are very few data and the choice of the second study may be influenced by the findings of the first.

The increased diagnostic yield of a TRO study over dedicated coronary CT is quite small, and when the overall likelihood of both PE and AAS is low, TRO CTA is considered rarely appropriate.

Clinical Scenario 20: Overall Likelihood of ACS, PE, or AAS Is Not Low

TRO CTA is considered appropriate in patients for whom the overall likelihood of ACS, PE, or AAS is not low. As CT technology continues to improve, additional studies are anticipated that will simultaneously assess the coronary plus pulmonary arteries as well as the aorta.