“#40: Period Problems: Heavy Menstrual Bleeding,” Awesome Help From The Cribsiders With An Additional Link On PCOS

In this post, I link to and excerpt from The Cribsiders‘ [Link is to the complete episode list] #40: Period Problems: Heavy Menstrual Bleeding.
DECEMBER 8, 2021. By Dr. SAM MASUR.

All that follows is from this wonderful podcast and show notes. [Note: Readers of this post should go to the direct link above. I just excerpt because that helps me remember the material-like underlining your notes or textbook].

Jump into #shematology with Dr. Angela Weyand, a pediatric hematologist/oncologist with a focus on young patients with bleeding and clotting disorders. Learn how to work-up heavy menstrual bleeding, when to use antifibrinolytics, and why PCP and ED labs may not be doing accurate von Willebrand panels!

*For detailed information on iron deficiency without anemia, please see Iron deficiency Without Anemia-Why It Matters And How To Diagnose It-Three Resources
Posted on December 17, 2021 by Tom Wade MD 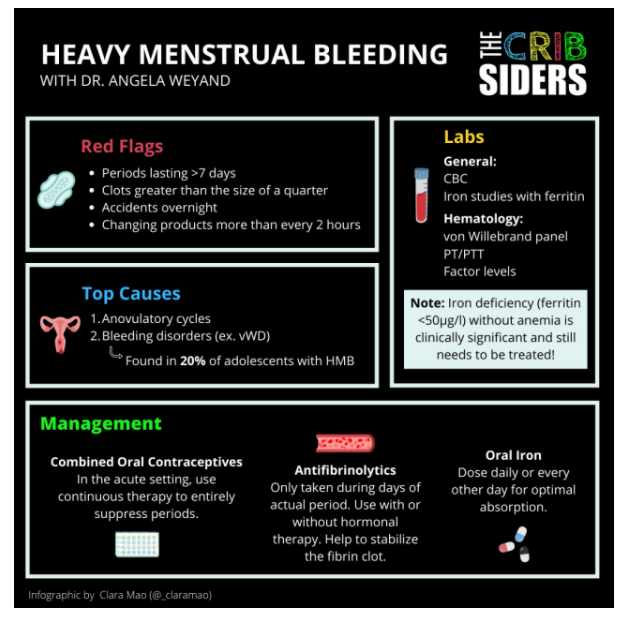 [However, there is a theoretical risk of growth suppression in the first year after the onset of menstruation. Progesterone only pills might be used during this time, Dr. Weyand states.

Heavy menstrual bleeding is defined through a patient-centered approach as excessive bleeding that affects quality of life in any way (ACOG 2019). Menstruation has historically been stigmatized, leading to underrecognition of heavy menstrual bleeding by patients and providers (Res Pract Thromb Haemost 2020). Red flags include: periods lasting >7 days, clots greater than the size of a quarter [If patient is using pads–can’t tell if using tampons], accidents overnight, needing to change products more frequently than every 2 hours, and a gushing/flooding sensation [for example, on going from a sitting to standing position].

Other words that you may hear around the topic:

As opposed to in adults, where structural pathologies like polyps, endometrial hyperplasia, and cancer are more common, heavy menstrual bleeding in adolescents is often related to causes like:

Menstrual histories are often skipped over by providers and can be awkward for patients to bring up themselves. It is important to get in the practice of asking often to normalize the conversation.

Patients with heavy menstrual bleeding often have normal physical exams. Some signs to look out for include hirsutism related to PCOS* (although patients may shave off significant hair growth) and criteria from the Beighton score for hypermobility (collagen disorders can affect blood clotting). A pelvic exam is NOT necessary in most cases unless there are additional concerns (ex. patient seeing or feeling something abnormal).

At minimum, check a CBC and iron studies with ferritin. If there is concern for an underlying bleeding disorder, other labs can include a von Willebrand panel, PT/PTT, and factor levels.

Within hematology, the use of race-based reference ranges has perpetuated the unfounded idea that there are inherent physiologic differences in variables such as hemoglobin between Black and white patients, despite race and ethnicity being social constructs. Such a practice has contributed to lower “normal” reference ranges for Black patients in many medical resources, leading to different thresholds to diagnose, work-up, and treat anemia. This is significant because anemia has been found to be associated with increased mortality from cardiovascular, maternal, perinatal, and malignant comorbidities (Lancet Haematol 2021). Rather than accept these abnormal values, providers should take the time to look for the underlying cause.

Pelvic ultrasounds are NOT commonly done in younger patients with heavy menstrual bleeding. However, it is reasonable to consider getting one if the patient is reporting severe dysmenorrhea or not responding to treatment as expected to rule out cancer.

When heavy menstrual bleeding causes anemia, it is important to 1) lighten, if not entirely suppress, bleeding, and 2) replete iron stores.

Combined oral contraceptives: In the acute setting, it can be helpful to start with continuous therapy to give patients extended time without bleeding. A reasonable starting dose is ethinyl estradiol 0.02mg and norethindrone 1mg, which can be titrated up as needed. When the anemia improves, patients can switch to cyclical therapy using monophasic pills that will help to lighten bleeding during the placebo week.

Progesterone-only pills: In younger patients who have just reached menarche, there is a hypothetical risk that estrogen may lead to premature closure of growth plates. The clinical data is unclear, but some providers may choose to initially use POPs such as norethindrone. Dosing starts at 0.35mg daily but may need to be titrated up to as high as 10mg daily.

IUDs: Levonorgestrel IUDs are another good long-term alternative because they cause amenorrhea or lighter periods in most patients. Avoid using copper IUDs because they can make bleeding worse.

Implant: Less preferred because of unpredictable effects on periods and breakthrough bleeding.

Antifibrinolytics like tranexamic acid and aminocaproic acid act to stabilize fibrin clots but do not regulate menstrual cycles. They can be used with or without hormonal therapy to decrease the total amount of bleeding and are only taken during the week of the actual period.

Oral ferrous sulfate can be taken daily or every other day for improved absorption. Recent studies in non-anemic adult patients have shown that the body increases hepcidin when taking iron, which makes subsequent doses of iron less well absorbed (Haematologica 2020). Instruct patients to avoid taking their iron with milk, calcium, eggs or tannin-containing foods. Families can also cook with an iron fish!

When available, IV iron is also a great option to replete stores quickly.

Dr. Weyand encourages referring a patient to hematology if there is any concern for an underlying bleeding disorder or if the patient is severely anemic. Heavy menstrual bleeding can be the presenting symptom of von Willebrand disease, which is the most common bleeding disorder in this population (Pediatr Rev 2018). Taking a thorough bleeding/bruising history can help with the decision:

This entry was posted in Cribsiders, The Cribsiders. Bookmark the permalink.