Here is the link to and excerpts from 5 Pearls On Hepatic Encephalopathy from CoreIM.

Here are excerpts from 5 Pearls: 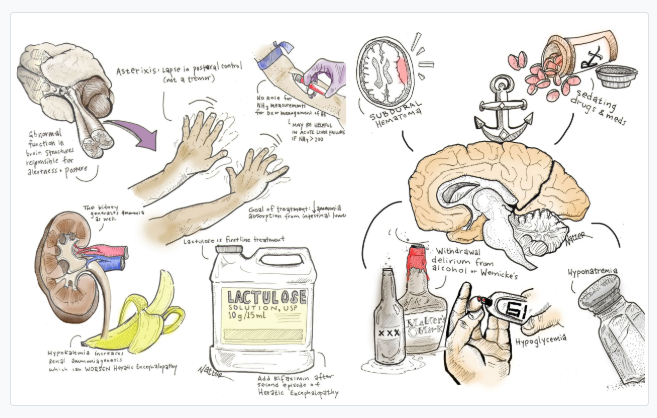 Big key is not to forget that other things besides hepatic encephalopathy can cause confusion in a cirrhotic. The bottom right of the above chart has some other causes to consider.

Here are excerpts from the 2014 AASLD Guidelines On Hepatic Encephalopathy:

Hepatic encephalopathy is a brain dysfunction caused
by liver insufficiency and/or PSS [porto-systemic shunt]; it manifests as a wide spectrum of neurological or psychiatric abnormalities ranging from subclinical alterations to coma.

The incidence and prevalence of HE are related to
the severity of the underlying liver insufficiency and
PSS.12-15 In patients with cirrhosis, fully symptomatic
overt HE (OHE) is an event that defines the decompensated phase of the disease, such as VB or ascites.7 Overt hepatic encephalopathy is also reported in subjects without cirrhosis with extensive PSS.8,9

The risk for the first bout of OHE is 5%-25% within 5 years after cirrhosis diagnosis, depending on the presence of risk factors, such as other complications to cirrhosis (MHE or CHE, infections, VB, or ascites) and probably diabetes and hepatitis C.28-32

After TIPS, the median cumulative 1-year incidence of OHE is 10%-50%36,37 and is greatly influenced by the patient selection criteria adopted.38 Comparable data were obtained by PSS surgery.39

Hepatic encephalopathy produces a wide spectrum of
nonspecific neurological and psychiatric manifestations.10
In its lowest expression,43,44

As HE progresses, personality changes, such as apathy,
irritability, and disinhibition, may be reported by the patient’s relatives,47 and obvious alterations in consciousness and motor function occur.

Patients may develop progressive disorientation to time and space, inappropriate behavior, and acute confusional state with agitation or somnolence, stupor, and, finally, coma.51

Hepatic encephalopathy should be classified according to all of the following four factors.10

1. According to the underlying disease, HE is subdivided into

The clinical manifestations of types B and C are similar, whereas type A has distinct features and, notably, may be associated with increased intracranial pressure and a risk of cerebral herniation. The management of HE type A is described in recent guidelines on ALF62,63 and is not included in this document.

2. According to the severity of manifestations. The
continuum that is HE has been arbitrarily subdivided. For clinical and research purposes, a scheme of such grading is provided (Table 2). Operative classifications that refer to defined functional impairments aim at increasing intra- and inter-rater reliability and should be used whenever possible.

This entry was posted in Guidelines, Hepatology. Bookmark the permalink.