This post contains excerpts from the CoreIM podcast with a resource from the American Journal of Hematology:

Here are excerpts from 5 Pearls on Iron Deficiency Anemia:

What follows are excerpts from How we diagnose and treat iron deficiency anemia [PubMed Abstract]:

Symptoms suggesting ID are generally vague and can be associated with a number of clinical conditions. Symptoms highly suggestive of ID include generalized fatigue, often independent of anemia, and ingestion of non-nutritive materials such as clay, dirt, paper, laundry starch, and others (pica). Because of their chronicity, elucidating these symptoms requires specific questioning. This type of behavior is much more common in women and children, for unclear reasons.

Signs of ID include pallor (with anemia), decreased papillation of the tongue, cheilosis (cracking at the corners of the mouth; Fig. 1a), and prominent defects in the nail beds, including Mees lines and koilonychia, spooning of the nails; Fig. 1b [13,14]. As these signs and symptoms are nonspecific and often are not present at all, the initial suspicion of ID usually comes from the laboratory, with microcytic anemia or normocytic anemia, triggering a more definitive workup.

The laboratory diagnosis includes several tests, each of which requires some degree of interpretation to be accurately applied. When asked to
evaluate a patient for suspected ID, we request the tests shown in Table I.

TABLE I. Tests Used in the Diagnosis of ID, With or Without Anemia

1. Serum iron and TIBC.
2. Serum ferritin. Under normal physiological conditions, the serum ferritin represents the amount of iron in stores that can be mobilized for hemoglobin synthesis.
3. Red cell indices. If ID has progressed, there may be changes in the amount of hemoglobin in individual red cells and this
eventually results in a fall in the MCV and the MCHC.
4. Reticulocyte count. A test that is too often overlooked in the
initial evaluation of a low hemoglobin but is critical to the
accurate physiological classification of anemia [15].
5. Soluble (serum) transferrin receptor level (sTfR).
6. Reticulocyte hemoglobin concentration (CHr)

Serum iron represents the iron bound to the transport protein,
transferrin, available to be incorporated into hemoglobin in developing erythroblasts in the bone marrow.

The serum iron and the TIBC are used to calculate percent transferrin saturation (TSAT). Values below 20%, and certainly below 18%, suggest an inadequate supply of iron for hemoglobin synthesis and red cell production. A very low (typically less than 15%) TSAT is characteristic of ID but, by itself, is not diagnostic.

The serum ferritin (or, more properly, apoferritin), is the protein in the plasma which reflects the body’s iron stores under normal circumstances. However, the ferritin level is labile and will increase in the face of inflammation or hepatocellular injury, making interpretation of ferritin levels problematic.

If inflammation can be excluded, the ferritin level is a convenient reflection of iron stores. A low TSAT combined with low serum ferritin (<15–25 ng/mL, depending on the
laboratory) confirms the diagnosis of ID. For all practical purposes, a low ferritin level is only seen with ID.

Red cell indices will also change with ID with the red cells gradually becoming microcytic and hypochromic. These are relatively late changes compared with changes in serum iron and in storage iron.

The authors do not rely on the red cell indices to diagnose or treat ID, as MCV may be low in noniron deficient states such as thalassemia trait or the anemia of inflammation, and thus may be confusing.

The reticulocyte count is usually expressed by modern cell analyzers as a percent of all red cells or, preferably, in absolute numbers per microliter of whole blood. The reticulocyte count, appropriately adjusted for premature release of cells from the marrow, can be used to provide an estimate of the rate of effective marrow production compared with normal (set as a production index of 1). A production index greater than 2 is not compatible with iron deficiency anemia (IDA).

The soluble transferrin receptor (TfR) level is an underutilized laboratory measurement. Expression of the TfR gene, and several other genes involved in iron metabolism or heme synthesis, is regulated in part by the amount of intracellular iron. In the case of TfR, the presence of iron destabilizes TfR mRNA, blocking translation of the message. In the absence of iron, the mRNA is stabilized, effectively
upregulating translation. Ultimately, erythroid cells increase the number of surface TfR and this is reflected in plasma levels of TfR. Interestingly, in the face of inflammation or iron-restricted erythropoiesis, TfR levels do not rise, and TfR measurements become useful in distinguishing between true ID and inflammatory conditions associated with low serum iron and low TSAT (anemia of inflammation) [16,17].

[The article has detailed instructions on the dosing of oral and IV iron.]

Here are excepts from The Management Of Iron Deficiency Anemia [PubMed Abstract]:

Patients with iron deficiency anemia of uncertain etiology are usually referred to a gastroenterologist because gastrointestinal conditions are the most common causes,39-43 with only menstrual blood loss in premenopausal women a more frequent cause. This article concurs with most of the recommendations of the British Society of Gastroenterology44; however, we propose an alternative, streamlined management algorithm (Figure). 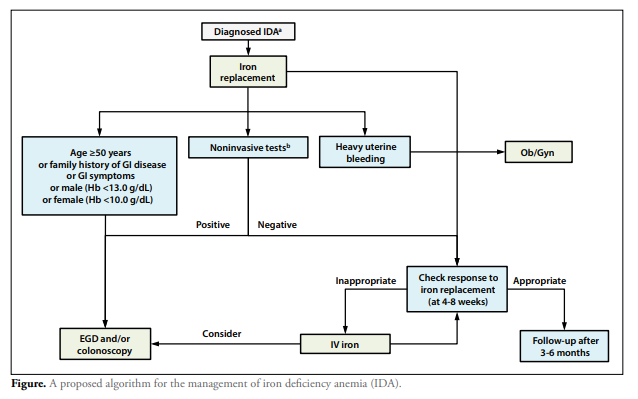 A proposed algorithm for the management of iron deficiency anemia (IDA).

a Endurance athletes and pregnant women should be treated without further diagnostic testing.

Anemia resulting from iron-restricted erythropoiesis
occurs through several mechanisms. In pure iron deficiency, depleted iron stores are due to an imbalance between iron uptake and utilization. Anemia may not be present initially because of iron recycling from erythrocyte turnover. However, iron deficiency alone is associated with fatigue and RLS, so patients may be symptomatic without anemia.16-18 The persistence of a negative balance leads to microcytic and hypochromic anemia. Adequate iron repletion and management of the cause of iron deficiency (Table 1) lead to resolution.

Functional iron deficiency, in contrast, is due to impaired iron release into the circulation from enterocytes, macrophages, or hepatocytes. Erythropoiesis is iron restricted; anemia develops despite adequate iron stores, and erythrocytes may appear normocytic or microcytic.45 This is the basis of anemia of chronic disease (ACD), in which inflammation leads to the overexpression of hepcidin, blocking the absorption of iron by enterocytes and its release from macrophages and hepatocytes.45,46

Thus, oral iron is ineffective, and intravenous iron is preferred.
In certain patients (eg, those with IBD), the combination of iron deficiency and inflammation may result in significant anemia, which must be considered during management and therapy.

There is clear evidence to support prompt treatment in all
patients with iron deficiency anemia because it is known
that treatment improves quality of life and physical condition as well as alleviates fatigue and cognitive deficits.8-20
Although clear evidence is lacking, iron deficiency without
anemia is associated with RLS and chronic fatigue, and
treatment alleviates these symptoms.7,14-18 In CHF, iron
replacement therapy has been shown to be beneficial, even
when anemia is not present.8,12-14 Thus, the decision to treat
iron deficiency in a patient without manifest anemia must
be made on an individual basis.53,54 The treatment of iron
deficiency anemia in patients with CKD, CHF, or cancer
should be undertaken in conjunction with the appropriate
specialists because different guidelines may apply

This entry was posted in Hematology. Bookmark the permalink.