Diagnosis of Acute HIV Infection: A New Diagnostic Algorithm From the CDC

What follows is from page 15, Sexually Transmitted Diseases Treatment Guidelines, 2010 from the CDC

Health-care providers should be knowledgeable about acute HIV infection and the symptoms and signs of acute retroviral syndrome, which develops in 50%–80% of acutely infected patients. Acute retroviral syndrome is characterized by non-specific symptoms, including fever, malaise, lymphadenopathy, and skin rash. It frequently occurs in the first few weeks after HIV infection, before antibody test results become positive. Suspicion of acute retroviral syndrome should result in prompt nucleic acid testing (HIV plasma RNA) in addition to an HIV antibody test to detect the presence of HIV. A positive HIV nucleic acid test should be confirmed by subsequent antibody testing to document seroconversion. Acutely infected patients are highly contagious during this stage of infection because the concentration of virus in plasma and genital secretions is extremely elevated (125,133). Antiretroviral therapy might benefit the health of persons with recently acquired HIV infection and reduce their infectiousness to others, but evidence to support this recommendation is still inconclusive and awaits the outcomes of several clinical trials currently underway (129). Notwithstanding, patients with acute HIV infection should be referred immediately to an HIV clinical-care provider. Diagnosis of HIV infection should prompt efforts to reduce behaviors that could transmit HIV to others (134).”

Diagnosis of Acute HIV Infection: A New Diagnostic Algorithm From the CDC

Early HIV IAs used either viral lysate antigens (first generation) or synthetic peptides and recombinant antigens (second generation) and detected only immunoglobulin G (IgG)-class antibodies. Most laboratories now use either third-generation IAs that detect both immunoglobulin M-class and IgG-class antibodies or fourth-generation combination antigen/antibody IAs that detect both classes of antibody and also p24 antigen (a major core protein of HIV). The p24 antigen can be detected early, before antibody appears, allowing the fourth-generation IAs to identify some HIV infections in the acute phase. In this report, fourth-generation, IA-reactive specimens with a negative supplemental test but detectable HIV-1 RNA were classified as acute HIV infection.

The current laboratory diagnostic algorithm for HIV cannot detect acute infections and misclassifies approximately 60% of HIV-2 infections as HIV-1, based on HIV-1 WB results (4). The new diagnostic algorithm evaluated in this study replaces the WB with an HIV-1/HIV-2 antibody differentiation assay as the supplemental test and includes an RNA test to resolve reactive IA with negative supplemental test results (Figure 1). In retrospective studies, this algorithm performed better than the WB at identifying HIV-antibody–positive persons, detecting acute HIV-1 infections, and diagnosing unsuspected HIV-2 infections (5,6). In this report, data from two evaluations of this algorithm are analyzed, one from an HIV testing program in Phoenix, Arizona, and the other from an ongoing HIV testing study in three sites.” 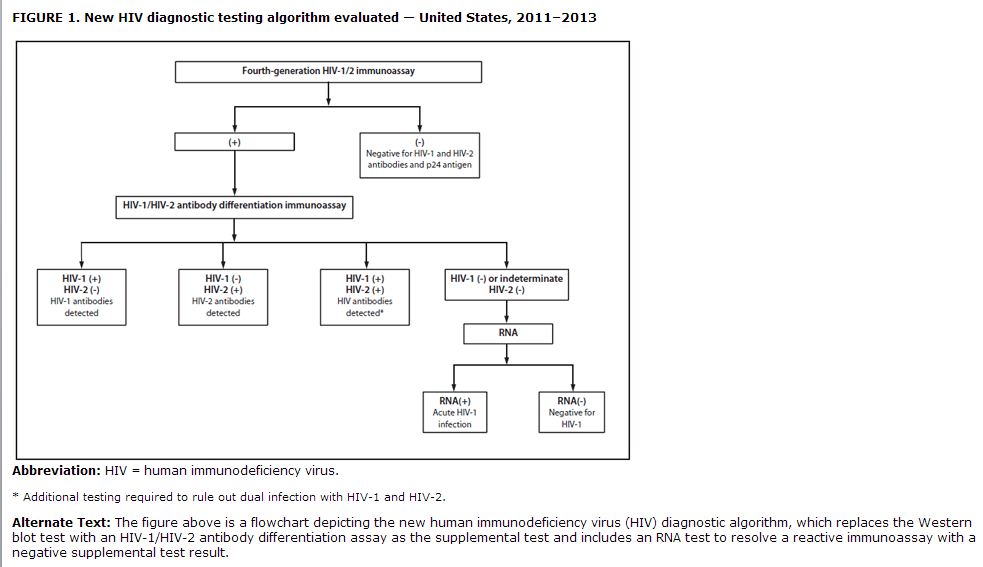 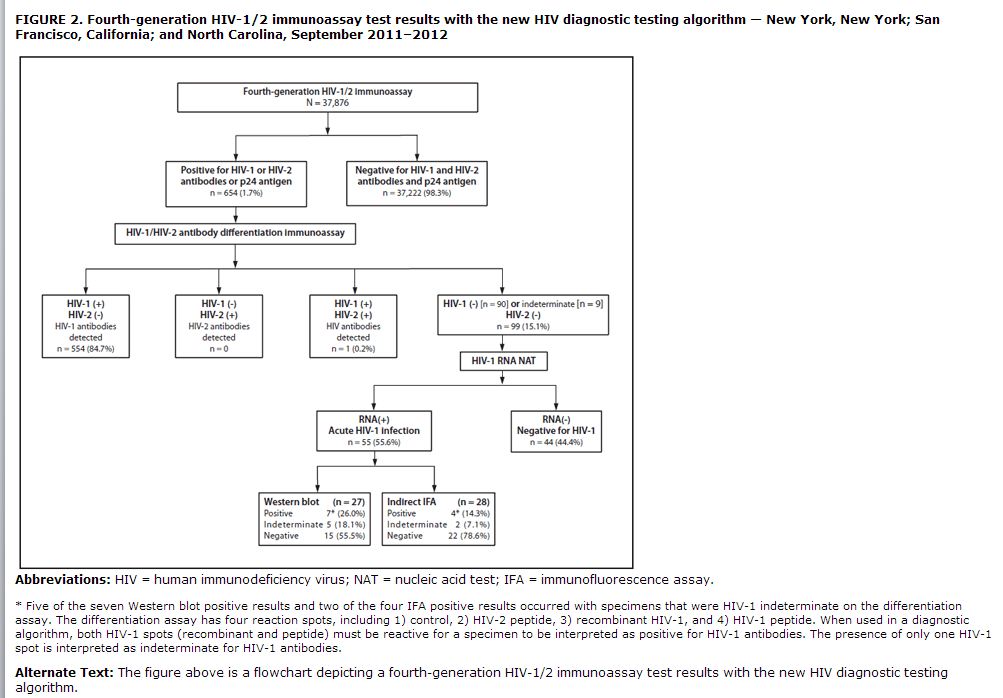 Improved HIV IAs enhance the ability to detect HIV infection earlier, even during the acute phase of infection, when substantial HIV transmission occurs. However, specimens with reactive IA and negative supplemental test results must undergo further testing to differentiate acute HIV infection from false-positive results. This report demonstrates that acute HIV infections detected with third- or fourth-generation IAs often are misclassified as HIV-negative by WB or IFA, potentially leading to adverse clinical outcomes for patients and further HIV transmission within the community (1). Applying the HIV testing algorithm evaluated in this analysis averted missed diagnoses in 32% of the HIV-infected patients in the Phoenix ED and 9% of those in the STOP study. With FDA’s approval of the Multispot HIV-1/HIV-2 rapid test for use as the second test in this algorithm in March 2013, laboratories can adopt this algorithm, which is a recommended option in the Clinical and Laboratory Standards Institute’s Criteria for Laboratory Testing and Diagnosis of Human Immunodeficiency Virus Infection; Approved Guideline (7). The fast turnaround time for test results from most third- and fourth-generation IAs (<1 hour) and the Multispot rapid test (15 minutes) affords the opportunity to deliver same-day definitive test results to the majority of HIV-infected persons who are antibody-positive. Regardless of which supplemental test is used, clinicians and laboratories might want to consider further HIV RNA testing for patients whose supplemental antibody test results are negative after a reactive third- or fourth-generation IA result (8).”

The ED at Maricopa Integrated Health Systems adopted routine, opt-out HIV screening consistent with CDC’s 2006 recommendations (9), using a fourth-generation IA. As a result, an additional 37 patients with HIV infection, including 12 with acute infection, were identified. Because most currently available FDA-approved rapid HIV tests are second-generation format (i.e., they detect only IgG-class antibodies), these acute HIV infections likely would have been missed if point-of-care rapid tests had been used for screening. The high percentage of HIV infections that were acute among these ED patients was unexpected; however, consistent with observations that 50%–90% of persons with acute HIV infection develop symptoms that prompt them to seek medical care (10), this finding suggests that acute HIV infection in persons who seek care for its nonspecific symptoms in EDs and other urgent-care venues might go undiagnosed unless HIV screening is conducted with fourth-generation HIV IAs. Currently, only one RNA assay, the Aptima HIV-1 RNA Qualitative Assay, is FDA-approved for HIV diagnosis, but it is available in far fewer laboratories than quantitative HIV-1 (viral load) RNA assays. To facilitate prompt diagnosis of acute HIV infection when faced with discordant screening and supplemental antibody test results, clinicians can order a viral load test to differentiate acute HIV-1 infection from false-positive IA results.

Third- and fourth-generation IAs are important advances for HIV testing that improve the ability to detect HIV infections earlier. In the two prospective evaluations described in this report, the new diagnostic testing algorithm performed better than the current algorithm for identifying HIV infections. CDC’s recommendation for a new HIV diagnostic algorithm, which will incorporate the findings of this analysis, is under development. Clinicians can use the findings from this report by remaining vigilant for discordant IA and supplemental test results and either ordering an HIV-1 nucleic acid test or obtaining follow-up HIV testing (in 2–4 weeks) to accurately determine whether HIV infection is present.