Google+ Dr. Farkas Gives Us The Best Post Ever On Septic Shock! Links To And Excerpts From Septic Shock From The Internet Book Of Critical Care - Tom Wade MD

Dr. Farkas Gives Us The Best Post Ever On Septic Shock! Links To And Excerpts From Septic Shock From The Internet Book Of Critical Care

In this post I link to and excerpt from Dr. Josh Farkas’ Internet Book of Critical Care chapter Septic Shock, February 7, 2017 by Josh Farkas.

Note to myself: I create these excerpts because doing so helps me to fix the material in my mind. But for review, I will be using the show notes from Dr. Farkas’ Septic Shock chapter.

CONTENTS [The links below go directly to that section of Dr. Farkas post]

This chapter describes my approach to septic shock.  It is evidence-based, but there’s inadequate evidence available to prove that it is superior to innumerable other ways of treating septic shock.  Overall, it is a fairly simple approach that doesn’t involve a lot of fancy gadgetry.  As such, this approach should be accessible to a wide variety of practitioners.

Please review this historical material in the link above.

The consensus definition of septic shock was updated from Sepsis-II to Sepsis-III recently.  These definitions may be summarized as follows:

Neither of these definitions is perfect, but they focus our attention on two key bits that together help delineate septic shock:

Sepsis III requires both bits, which is a mistake because they measure different things: 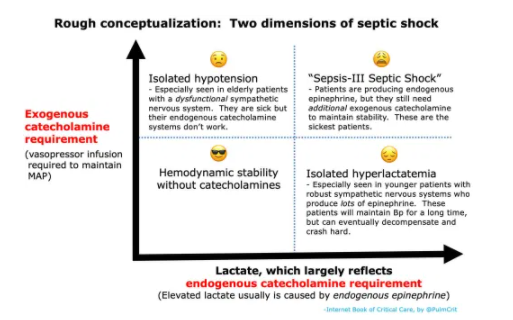 Lactate is not specific to septic shock.  Lactate may be elevated by a panoply of conditions (including any shock state, physiologic stress, beta-agonists, seizure, or hepatic dysfunction).  Elevated lactate does often identify patients who are at increased risk of mortality, who require more intensive investigation and treatment.

Ultimately, formal definitions are more relevant to clinical trials than bedside management of individual patients.  These blunt tools are inadequate to direct patient management.  Instead, a diagnosis of septic shock should be made carefully on an individual basis, using clinical judgement and consideration of the following factors:

Septic shock encompasses a broad range of infections in a diverse range of patients.  The table below shows common signs and symptoms of sepsis.  This can be a difficult diagnosis, because different patients will present with different constellations of these findings. 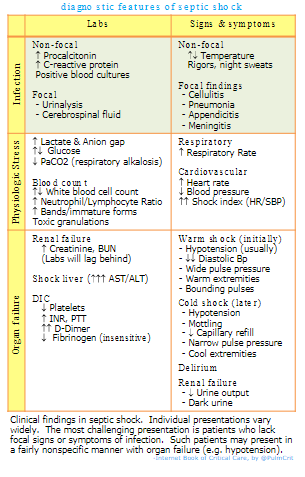 In many cases, septic shock may be suspected before the underlying infection is definitively diagnosed.  In such cases, it is generally best to empirically treat as if the patient has septic shock, while obtaining additional information (e.g., culture data, definitive CT imaging).

With increased focus on sepsis and septic shock, other disorders are increasingly likely to be misdiagnosed as septic shock (27692840).  Common mimics and their evaluation are shown here: 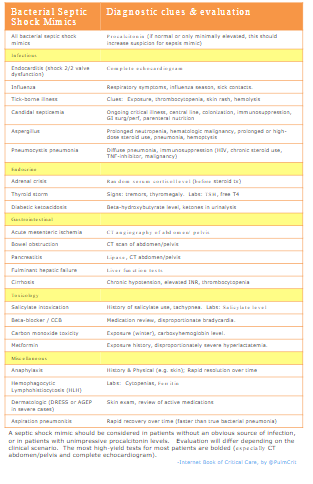 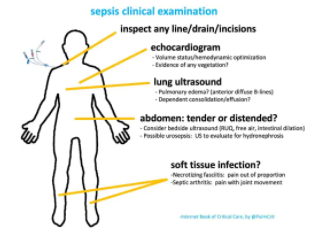 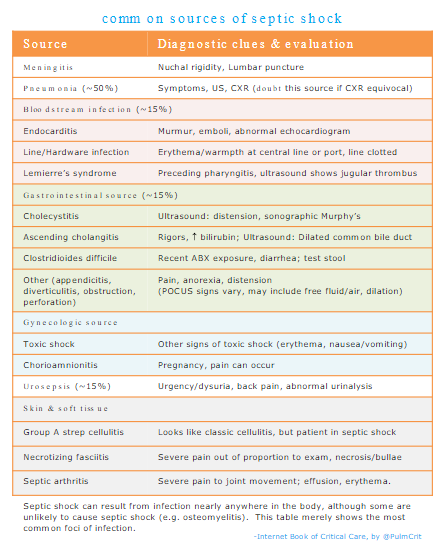 choice of the first pressor:  there is no “first-line” agent 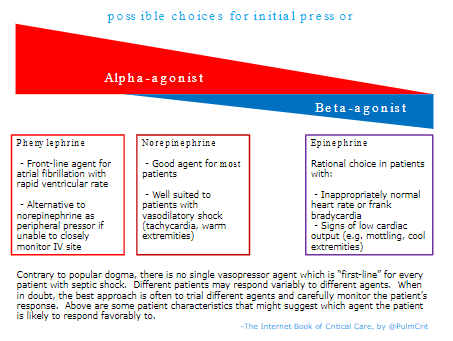 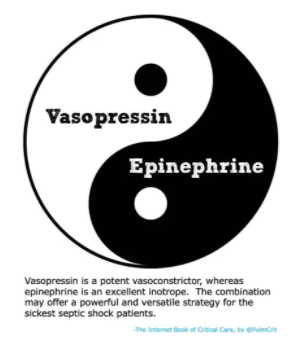 epinephrine might be the preferred inotrope for septic shock 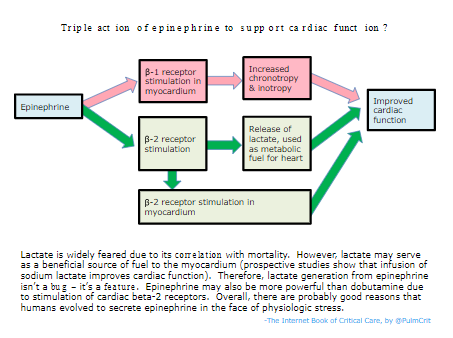 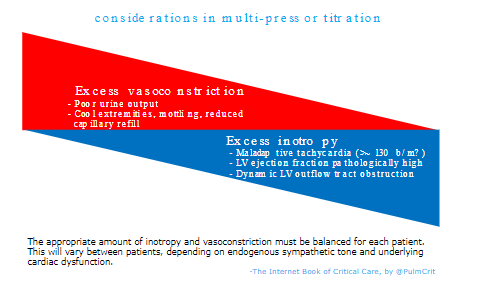 This entry was posted in Critical Care, IBCC By Dr. Josh Farkas, Internet Book Of Critical Care By Dr. Farkas. Bookmark the permalink.