During the video, Dr. Oller reviews for us his diagnostic thinking and treatment as he evaluates the patient for SIRS, sepsis, severe sepsis.

Dr. Oller, on Dec 3, 2014, posted severe sore throat, an excellent discussion of the workup and treatment of sore throat. Worth watching more than once. Watch the video and then below the video, I have posted a transcript I made of his talk, see why below.

This is a case of severe exudative tonsillitis from theedexitvideo YouTube Channel. In this video Dr. Oller will discuss a systematic way of making sure you don’t miss the seriously ill patient who doesn’t look that sick.

All that follows is from Dr. Oller’s video [except text between brackets are my comments]:

[The patient is a man who appears to be in his early twenties and] has very serious swollen almost kissing tonsils with severe exudates.

At the first instance you see a bad sore throat like this, and you think: Well, it’s strep throat. And most likely it is but there are other critical considerations [mainly, is this patient seriously ill even if he doesn’t look seriously ill (meaning septic or severely septic – – see the criteria for SIRS, sepsis, severe sepsis, and septic shock in Resources following this post)].

But before we jump into the diagnosis let’s go back to the clinical scenario.

He presented with a severe sore throat, a fever, and a heart rate of 130.

I know that in the past sepsis used to be the diagnosis for people were very sick and in the ICU.

But the new definition of sepsis is very clear. The SIRS criteria plus a presumed source of infection gives you the diagnosis of sepsis.

This particular patient we have to say at least he’s septic. He is tachycardic; he has a fever; and has a source of infection.

So my initial treatment on this patient, once I see the bad sore throat [and] the tachycardia of 130, is to do a blood count, a CMP which includes liver function tests [and a lactate – – he mentions ordering this test later in the talk but it’s a great idea for anyone who looks like they’re not sick but who might be], and start an IV and give him IV fluids.

Because he’s in so much pain and discomfort, I’m going to give him IV fluid hydration: 1 L of IV fluid bolus at the very least or maybe two depending on whether or not he responds [to the first liter] in terms of the tachycardia.

Then I’m going to give a dose of antibiotics because most likely this is bacterial. Whether or not it is strep or not we don’t know yet. But most likely it’s bacterial.

So my initial antibiotic of choice is, for patient like this, ceftriaxone but there are other choices.

I’m also having give him a dose of Decadron. Decadron is a steroid. I can give it through the IV. And that will decrease the swelling of the tonsils, decrease the pain, and make the patient feel a whole lot better.

The disadvantage [of steroids] is that steroids can decrease the bodies ability to fight infection so you don’t want to do this chronically. But a single dose just for comfort and care, sure.

And then order at least 1 L of fluid and maybe two to bring that tachycardia down. And of course I’m going to re-examine the patient.

In terms of diagnostics I’m going to do a throat swab for strep, a strep screen. It can have false negatives. And if it is negative, I have to follow-up with the culture. It’ll take 48 hours [for the culture]. And the other test on to do for this patient is a mono screen.

Now the mono screen it has about a flip of a coin as to how accurate it is but I’m still to order it.

So [I’m going to order] a CBC, CMP, maybe a lactate, put in the IV and give Decadron, ceftriaxone, and fluids. And then intended to a mono spot and a strep screen.

On this particular patient the mono spot was negative. So [you’re thinking] it’s strep. No it wasn’t, the strep test was negative [he means the strep screen was negative as was the subsequent strep culture, most likely].

However, you saw that throat. It has swollen tonsils. It has exudates bilaterally. So that looks to me like bacterial infection. There are many other causes of bacterial infection besides strep. So I’m going to go ahead and treat that patient with antibiotics.

When I went back to check on the patient, his heart rate was 110 and he felt a whole lot better after the steroids, pain medicine, and all that stuff.

And so I gave him the second liter of fluid. That brought it down to 100. He felt great. He was tolerating fluids. He left and went home with an antibiotic prescription. I covered him with penicillin. It could’ve been amoxicillin, Augment, Omnicef: There are plenty of antibiotic choices.

I did not put him on steroids orally because I gave him a dose of Decadron. And of course I told him about not going to work because whatever it is it’s potentially contagious.

So there you have it: this is the workup of a patient from start to finish.

[So basically Dr. Oller did what we all do whether in the office or ER. He considered how sick the patient was. The patient was septic because he met the criteria for SIRS with evidence of infection) He found no evidence for severe sepsis (meaning sepsis associated with organ system dysfunction, hypoperfusion or hypotension.

Dr. Oller checked for organ dysfunction with his clinical examination and his extensive and appropriate lab evaluation which was all presumably normal including the serum lactate.

The tachycardia resolved with the 2 liters of fluid and clinically the patient appeared well.

Thus Dr. Oller was able to safely discharge the patient]

In 1992, the American College of Chest Physicians (ACCP) and the Society of Critical Care Medicine (SCCM) introduced definitions for systemic inflammatory response syndrome (SIRS), sepsis, severe sepsis, septic shock, and multiple organ dysfunction syndrome (MODS). [1] The idea behind defining SIRS was to define a clinical response to a nonspecific insult of either infectious or noninfectious origin. SIRS is defined as 2 or more of the following [four] variables (see Presentation and Workup):

SIRS is nonspecific and can be caused by ischemia, inflammation, trauma, infection, or several insults combined. Thus, SIRS is not always related to infection. (See Pathophysiology and Etiology.) 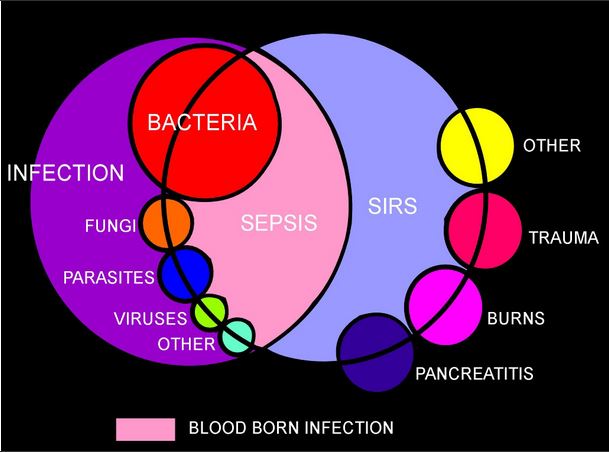 Infection is defined as “a microbial phenomenon characterized by an inflammatory response to the microorganisms or the invasion of normally sterile tissue by those organisms.”

Bacteremia is the presence of bacteria within the bloodstream, but this condition does not always lead to SIRS or sepsis. Sepsis is the systemic response to infection and is defined as the presence of SIRS in addition to a documented or presumed infection. Severe sepsis meets the aforementioned criteria and is associated with organ dysfunction, hypoperfusion, or hypotension. (See Etiology, Treatment, and Medication.)

Sepsis-induced hypotension is defined as “the presence of a systolic blood pressure of less than 90 mm Hg or a reduction of more than 40 mm Hg from baseline in the absence of other causes of hypotension.” Patients meet the criteria for septic shock if they have persistent hypotension and perfusion abnormalities despite adequate fluid resuscitation. MODS is a state of physiologic derangements in which organ function is not capable of maintaining homeostasis. (See Pathophysiology.)

Complications vary based on underlying etiology. Routine prophylaxis, including deep vein thrombosis (DVT) and stress ulcer prophylaxis, should be initiated when clinically indicated in severely ill bed-ridden patients, especially if they require mechanical ventilation. Long-term antibiotics, when clinically indicated, should be as narrow spectrum as possible to limit the potential for superinfection (suggested by a new fever, a change in the white blood cell [WBC] count, or clinical deterioration). Unnecessary vascular catheters and Foley catheters should be removed as soon as possible. (See Prognosis, Treatment, and Medication.)

Potential complications include the following:

Education should ideally target the patient’s family. Family members need to understand the fluid nature of immune responsiveness and that SIRS is a potential harbinger of other more dire syndromes.