Everyone I know is inundated with unwanted (scam) cell phone calls and text messages. The New York Times a few days ago had an outstanding article on how to deal with this problem, How to Use ‘Do Not Disturb’ on Your Phone (While Still Letting Important Calls Through) NYT by  Whitson Gordon, Jan. 24, 2019.

The bliss of turning off all notifications on your phone doesn’t have to come with the anxiety of potentially missing an important call or text. Here’s how you can have it all.

Here are some excerpts [for information on how to accomplish this on the iphone see the article]: 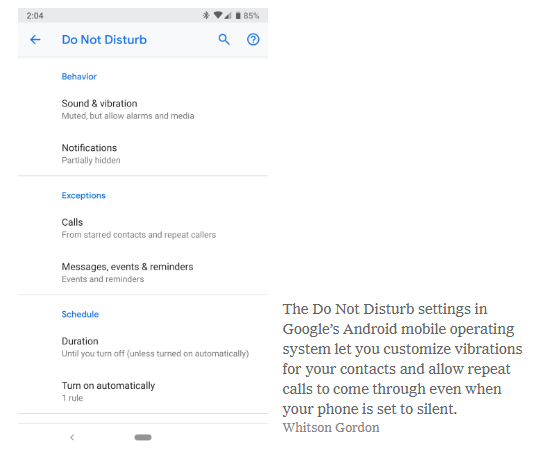 If your phone runs Google’s Android operating system, the Do Not Disturb settings may be laid out a bit differently depending on which phone you use. But here’s the gist of how they work, which should point you in the right direction.

First, open the Settings app and head to Sound > Do Not Disturb. From here, you can customize a few aspects of the feature, including:

I highly recommend turning on an exception for repeat calls and starred contacts, letting you block most notifications in Do Not Disturb mode but allowing the ones you know won’t be sent unless they’re urgent or important. If you do that, make sure to star the right contacts in Android’s Contacts app — just tap on a contact to bring up their info, and tap the star in the upper right corner to mark them as important.

With these settings in place, you can feel much better about using Do Not Disturb liberally — not just at night, but during meetings, date night and whenever else you don’t want to be bothered.

Correction: An earlier version of this article suggested it may not be possible to filter text messages from certain contacts in Do Not Disturb on the iPhone. This version has been updated to note that it is possible, and include instructions on how to do so.

Whitson Gordon is a technology journalist based in San Diego. @WhitsonGordon

Linkedin
This entry was posted in Ecommerce, Potpourri. Bookmark the permalink.