Hyponatremia – Best Help Ever From Drs. Topf And Weingart With Additional Resources

Note to myself: Here in this post I review hyponatremia. After each resource I’ll go over what I will do in reviewing that resource the next time I visit this page.

First I listen to the first thirty minutes of EMCrit Podcast 242 – ED Nephrology with Joel Topf aka KidneyBoy March 9, 2019 by Scott Weingart which I’ve embedded here. It is an awesome review:

Next there is Dr. Topf’s outstanding Tweetorial on Hyponatremia [which is basically identical with the podcast above but with figures that help re-enforce the podcast]:

I was consulted for hyponatremia. The sodium was 122 and the patient was apparently asymptomatic.

The patient had an excellent ER doc who did a complete biochemical assessment of hyponatremia:

The urine Na is low, patients with hyponatremia should not be retaining Na.

The high plasma osmolality with a low plasma sodium is a weird situation that should derail you from standard hyponatremia algorithm. 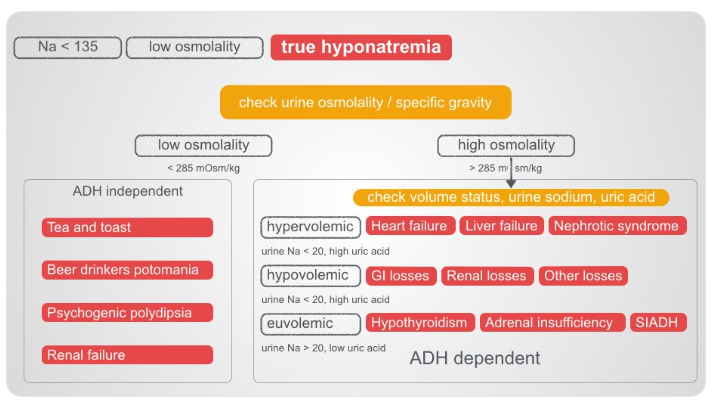 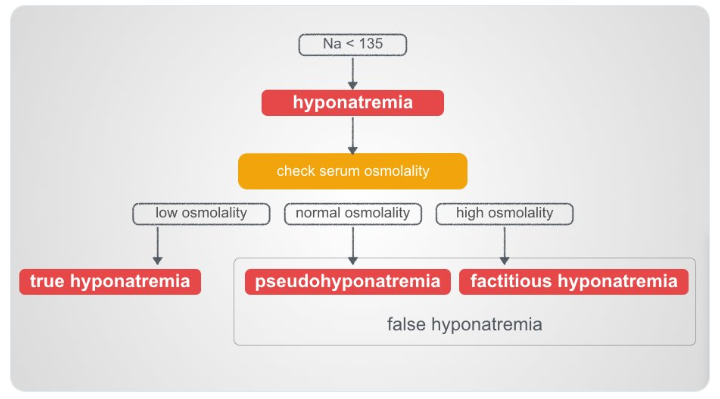 Hyponatremia with a normal osmolality should make you think of pseudohyponatremia due to excess lipids or serum protein causing a lab artifact (if your lab still indirect ion selective electrodes (ISE). Most labs are not susceptible to this artifact because they use direct ISE)

There is another unusual cause of this combination of low sodium and normal osmolality. This is during prostatic surgery when the surgeons use 5% mannitol as irrigation and excess is absorbed into the circulation.*

Hyponatremia with a high osmolality means there is an additional solute besides sodium in the extracellular compartment. These can be osmotically active or osmotically inactive.

The more interesting ones are the ones that are osmotically active, like glucose or mannitol. They are interesting because they cause both the hyperosmolality and the hyponatremia.
Hyponatremia with increased osmolality is classically seen with hyperglycemia. Here the the increased extracellular glucose is osmotically active so it draws water from the intracellular compartment which then dilutes the extracellular sodium. So you have ↓Na and ↑osmolality.

Since these patients are hypertonic they will behave more like patients with hypernatremia, expressing increased thirst and concentrating their urine in order to retain free water to lower serum osmolality.

In addition to glucose, you can also see this with mannitol.onlinelibrary.wiley.com/doi/full/10.11…

So in my patient I checked the serum glucose, 80 mg/dL and did a thorough review of systems that confirmed to me that he had not received any mannitol in the recent past.

There may be other osmotically active solutes that cause hypertonic hyponatremia but I can’t think of any.

So that leaves the actual diagnosis, the patient had hyponatremia with an excess of an osmotically inactive solute. This can be seen with ethanol or BUN (kidney failure) (BUN).
Since ethanol and BUN diffuse across the cell membrane (they osmotically inactive) they do not cause water to move out of the cell (the hall mark of true hypotonic hyponatremia). 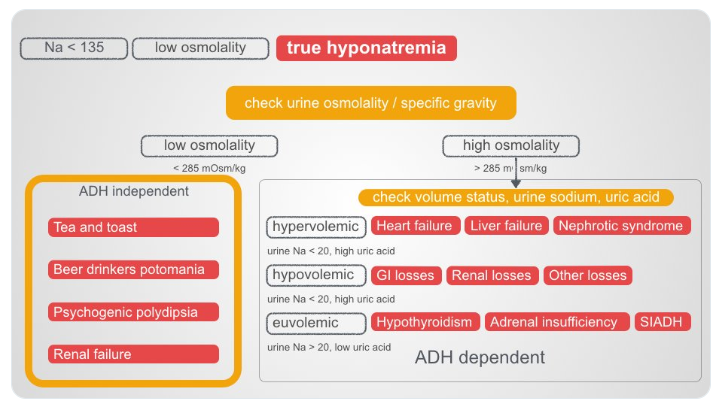 This was the diagnosis. The patient had been on a beer only bender for weeks and had no essentially no other nutrition.

Next I will review [have reviewed] Resource (3) below, CritCases 10 Hyponatremia Associated Seizures. Written by Jim Brokenshire; Edited by Michael Misch & Anton Helman June 2018. Here are excerpts:

A 52 year old female is brought by car to a rural ED, presenting with gradual onset worsening generalized headache, nausea and vomiting over the past 4 days. According to her husband, she became increasingly confused over the past 4 hours. Her only sick contact is her daughter with sore throat, and she has not recently travelled.

Past medical history is notable for febrile seizure as an infant. She is on no medications.

While finishing the triage registration process she has a focal right sided tonic/clonic seizure lasting 1 minute. She is subsequently post-ictal with a GCS of 6 and is brought into the resuscitation bay. Shortly thereafter, she begins to seize again…

What is the differential diagnosis and initial management?

The differential at this point is quite broad. The presentation of progressive headache, vomiting, and altered mental state (and now status epilepticus) should prompt consideration of

The presence of a sick contact suggests a potential infectious etiology.

Initial management should consist of basic airway maneuvers and establishment of intravenous lines.  A capillary glucose is a must – in this case it was initially 9.7 mmol/L [174mg/dl]. Benzodiazepines are first-line for treatment of status epilepticus..

She is given lorazepam 4 mg IV and the seizure terminates. She remains altered and postictal. A transfer via ground EMS to a tertiary care centre is requested.

The serum sodium is most strikingly abnormal.  What is your differential for this patient’s hyponatremia?

You have identified severe hyponatremia in this patient, which is a likely contributor to her seizure activity.  Seizures are relatively uncommon in patients with chronic hyponatremia, but occur in approximately 30% of patients with acute severe hyponatremia. In this case the sodium is extremely low and both acute and chronic causes must be considered. Hyponatremia is not a diagnosis —  the differential diagnosis is traditionally categorized based on the patient’s volume status, which may be challenging to assess. Clues to volume status may include history, vital signs (HR, BP, postural drop), POCUS findings, and presence of absence of edema. 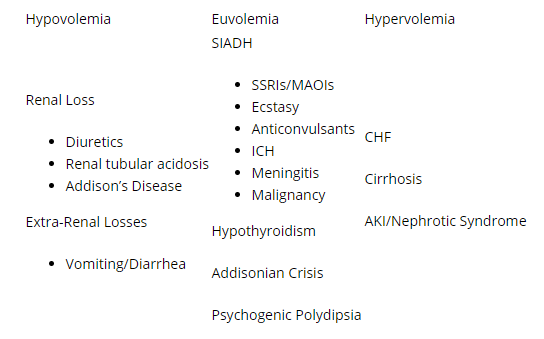 In this patient with preceding vomiting, extrarenal solute loss, SIADH, polydipsia and Addison’s are at the top of the differential.

What symptoms are attributable to this patient’s hyponatremia?

The patient is no longer seizing but remains obtunded with a GCS of 6.

How will you manage this patient prior to transfer?
This patient has severe symptoms of hyponatremia as defined by coma and seizures. They require rapid sodium correction with hypertonic saline. Typical dosing is 3% saline 100 ml IV bolus over 10 min. This may be repeated twice every 10 minutes if symptoms do not improve. If hypertonic saline is not readily available, 2 amps crash cart 8.4% sodium bicarbonate can be substituted. It is advisable to recheck serum sodium within 20 minutes.

What are your treatment goals when giving hypertonic saline?

Hypertonic saline is indicated for neurologic emergencies in the context of hyponatremia (ie. coma or seizures). Some guidelines advocate for its use for moderately severe symptoms such as confusion or headaches but this is controversial. Your goal should be to improve the patient’s symptoms of severe hyponatremia (improved LOC or terminating seizures) or increase serum sodium by 5 mmo/L, whichever comes first. In the severely hyponatremic patient, only small increases in sodium are necessary to achieve clinical improvement. If the serum sodium has increased by 10 mEq/L (or increased to 30 mmol/L) and there is no improvement in clinical status, you should consider other explanations for the patient’s altered mental status.

Clinical Pearl: If the serum sodium has increased by 10 mEq/L (or increased to 30 mmol/L) and there is no improvement in clinical status, you should consider other explanations for the patient’s altered mental status.

Rapid correction of hyponatremia increases the risk of Osmotic Demyelination Syndrome (ODS), previously termed Central Pontine Myelinolysis. Correction of acute hyponatremia should be less than 10 mmol/L in 24 hours but ideally less than 6 mmol/L in this time period. However, ODS is rare, and fear of it should not preclude administering hypertonic saline to symptomatic patients.

“I’d suggest 2-3 amps of Bicarbonate if they don’t have 3% saline available.”

The patient is given 2 doses of 100 cc 3% hypertonic saline. They are no longer seizing and are bucking the ventilator. You provide fentanyl for analgesia while en route. Repeat electrolytes are pending. The patient is awaiting plane arrival for the 30-minute transfer.

How will you manage the IV fluids during the 30-minute air transfer?

Following administration of hypertonic saline for coma or seizure, very judicious use of intravenous isotonic fluid is prudent. Further IV fluids should be administered only if the patient is clinically hypovolemic with the goal of restoring intravascular volume. Otherwise, fluid restriction is warranted. Intravenous Ringer’s Lactate may be preferable to Normal Saline, as Ringer’s is more isotonic for the hyponatremic patient. Fluid restriction after initial resuscitation is advisable. If the patient is deemed euvolemic, saline lock the IV.

“My personal practice is much like Rob, to terminate the seizure with HTS in a dose of 50 to 100 cc at a time over 10 min (or to substitute 2 amps of NaHCO3 if that is what is available). I’ve never had to give more than 2 doses of 50 mL of HTS personally.”

This patient was intubated, transferred, and admitted to ICU at a tertiary care centre. She was treated with Ceftriaxone/Vancomycin/Ampicillin/Acyclovir. Her brain MRI and LP were normal. She diuresed approximately 3 L in ICU within the first 3 hours. Her repeat sodium is 128 mmol/L.

Next I will review [have reviewed] Resource (4) below, Episode 60: Emergency Management of Hyponatremia:

Linkedin
This entry was posted in Fluids and Electrolytes, Laboratory Tests, Minicourses, Nephrology. Bookmark the permalink.