Link To And Excerpts From ECG Cases 16: Poor R Wave Progression – The Late Mneumonic From EMC

In this post I link to and excerpt from Emergency Medicine Cases‘ ECG Cases 16: Poor R-wave progression – The LATE mnemonic. Written by Jesse McLaren; Peer Reviewed and edited by Anton Helman. December 2020.

Note to myself when reviewing: First review the notes below from Dr. McClaren’s post and then go to the post itself to test myself by reviewing the six ECGs he has provided for us. 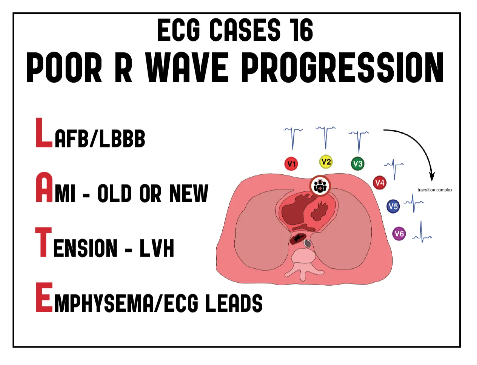 In this ECG Cases blog we examine 6 patients who presented with poor R wave progression, and a mnemonic for the differential

Six patients presented with poor R wave progression. Can you get the diagnosis based on the LATE mnemonic?

Ventricular depolarization begins in the septum, where it proceeds from left to right. Then the ventricles depolarize simultaneously, but because of the greater mass of the left ventricle the sum of electrical vectors is directed leftwards. So the right sided lead V1 has an rS wave: small positive R wave from septal depolarization and large negative S wave from left ventricular dominance. Moving across the precordium towards the left ventricle, the amplitude of the R wave increases and S wave decreases. The transition point, where R>S, is usually at V3-4. Poor wave progression has been variably defined as the failure to of the R wave to progress in amplitude (R<3mm in V3), reversal of the progression (eg R in V2>V3), or delayed transition beyond V4. There are electrical, ischemic, structural, pulmonary and technical causes of poor (or late) R wave progression—and the differential can be remembered by the mnemonic LATE:

Because of multiple causes, including normal variation, the presence of poor R wave progression in isolation on a baseline ECG is not a helpful finding in predicting prior anterior MI.[1] But for those diagnosed with anterior MI, poor R wave progression correlates with larger infarct size and lower LV function [2]. In addition, the sudden development of poor R wave progression can be a sign of acute coronary occlusion. As explained in Critical Decisions in Emergency Medicine and Acute Care Electrocardiography, “the presence of Q waves at the time of presentation in acute MI may be due to prior MI or due to early formation during acute MI. In acute anterior MI, Q waves are frequently due to ischemia and injury of the conducting system, as opposed to (irreversible) infarction, and appear within 1 hour of onset of symptoms in 50% of cases, and rapidly resolve with reperfusion…With anterior MI, there is similar loss of R wave voltage in the precordial leads, seen as a Q wave equivalent. Patients with diminished total R wave voltage have significantly reduced LV dysfunction and a worse prognosis.” Whereas STEMI criteria only focus on ST-segments in isolation, signs of occlusion MI (OMI) include acute Q waves or new loss of R waves (or new tall R waves from posterior MI). Examining the QRS complex before the ST segment and T waves also generates a reference point to determine disproportionate ST changes or hyperacute T waves.

Now go to Dr. McClaren’s post and test yourself against his six ECGs.

Six patients presented with poor R wave progression. Can you get the diagnosis based on the LATE mnemonic?

Case 1: 70yo previously well with one month of fatigue, normal vitals