Link To And Excerpts From ECG Cases 7: ST elevation in aVR, STEMI-equivalent? From EMC

In this post I link to and excerpt from Emergency Medicine Cases’ ECG Cases 7: ST elevation in aVR, STEMI-equivalent? Written by Jesse McLaren; Peer Reviewed and edited by Anton Helman. March 2020 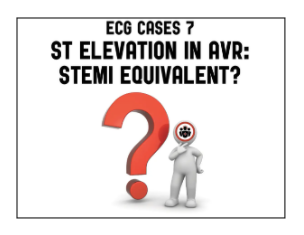 In this ECG Cases blog we look at 10 patients who presented with acute symptoms, whose ECGs revealed the “STEMI-equivalent” pattern of ST elevation in aVR with diffuse ST depression. Which had acute coronary occlusion?

aVR has gone from the “forgotten lead” to be equated with the worst coronary occlusion: the 2013 AHA/ACC STEMI guideline notes that “multilead ST depression with coexistent ST elevation in lead aVR has been described in patients with left main or proximal left anterior descending artery occlusion”[1] and the 2018 Fourth Universal Definition of MI added the update, “ST-segment elevation in lead aVR with specific repolarization patterns, as a STEMI equivalent.”[2] But the latter describe two situations of ST elevation in aVR: STE-aVR as a “STEMI-equivalent” (“ST-segment depression >1mm in six leads, which may be associated with ST-segment elevation in leads aVR or lead V1 and haemodynamic compromise, is suggestive evidence of multivessel disease or left main disease”), and STE-aVR as part of STEMI (“ST-elevation in lead aVR>1mm may accompany anterior or inferior STEMI, and is associated with increased 30 day mortality in patients with acute MI.”)

Because STEMI criteria and STEMI-equivalents focus on ST elevation, the focus for this pattern has been on the ST elevation in aVR, rather than on the ST depression in all the the other leads. But it’s not just ACS that can cause diffuse ST depression with ST elevation in aVR. A recent analysis of this pattern in 99 patients found that a third were tachy-dysrhythmias, a third were non-cardiac shock states (septic shock, hemorrhagic shock, dissection, PE), and a third were ACS. Only 10% had a culprit lesion, leading the authors to conclude that “routine STEMI activation in STE-aVR for emergent revascularization is not warranted.” This study included all patients with this ECG pattern irrespective of presentation (including septic shock) or ECG confounders (including LBBB/LVH that cause secondary ST depression, and tachy-arrhythmias that cause transient ST depression). Despite this broad inclusion, the overall population was very high risk: a third presented in cardiac arrest, and the in-hospital mortality rate was also a third (compared to 6% for STEMI without STE-aVR). In a more selective study of those patients undergoing angiography for diffuse ST depression with reciprocal STE in aVR (excluding LBBB and LVH), half required revascularization, of which half required CABG.[4]

As a review summarized, “although nearly half of patients with >1mm STE in aVR due to ACS will require coronary artery bypass surgery for revascularization, the infarct artery is often not the LM, but rather the LAD or severe 3-vessel disease. More importantly, such ECG findings are frequently due to nonocclusive etiologies (eg, baseline LVH, demand ischemia secondary to respiratory failure, aortic stenosis, hemorrhagic shock)…thus, a number of expert reviews emphasize the low specificity of the aVR STE pattern, preferring to label it as circumferential subendocardial ischemia; in this syndrome, STE in aVR is reciprocal STE, reciprocal to an STD vector toward leads II and V5…some patients whose ECGs already meet conventional STEMI criteria might also have STE in lead aVR. This finding does not alter the need to pursue emergent reperfusion, although it might suggest a poorer prognosis.”[5]

So it’s more helpful to think of STE-aVR as reciprocal to diffuse ST depression, rather than the other way around. Then the question becomes, what is causing diffuse ST depression? Is it simply a repolarization abnormality (LVH, LBBB) or rate-related (eg SVT), is it from a metabolic/toxic cause (hypokalemia, dig toxicity), is it from a non-ACS shock state (sepsis, hemorrhage, dissection, PE), or is it from acute coronary occlusion (in addition to other signs of occlusion, or as the only sign).

10 patients presented with acute symptoms and ECGs that had the “STEMI-equivalent” pattern of ST elevation in aVR and diffuse ST depression. Which had acute coronary occlusion?

Patient 1: 70yo with two hours of chest pain. Normal vitals. 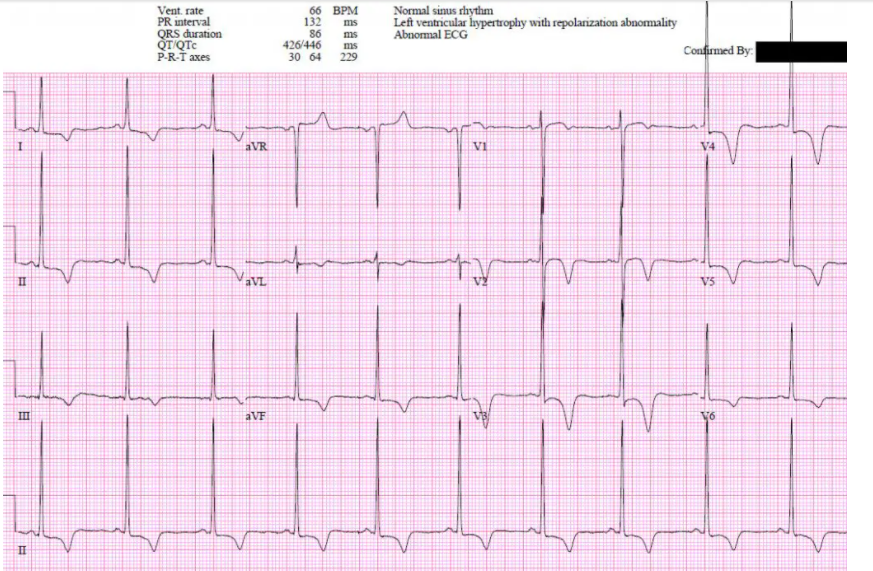